Spanish ballerina who kicked policeman in groin at Heathrow is jailed

Daiana Andreas Rivera, 33, lashed out at police officers at Heathrow Airport after she was told she was too drunk to board her flight home to Madrid, Spain

A drunk ballerina who kicked a police officer in the groin and scratched two others after missing her flight following a boozy session in an airport Wetherspoon’s pub was jailed for two months today.

Spaniard Daiana Andreas Rivera, 33, lashed out after she was seen staggering around while intoxicated at the Flying Chariot bar inside Heathrow’s Terminal 2 on August 7.

The dancer, who was part of the prestigious Spanish Víctor Ullate Ballet dance company, attacked the police officers who also discovered she was carrying a lock knife after her arrest.

Today Rivera, who had been due to fly home to Madrid after recently being made homeless in London, was jailed for two months at Isleworth Crown Court.

But because of time served since her arrest she is expected to be released imminently.

The ballerina has performed in Romeo and Juliet, Copelia and Swan Lake for dance company Danza SXXI but recently fell on bad times.

Ms Rivera was planning to fly home to Madrid, Spain, after being thrown out of her flat in London.

However she became increasingly disruptive at Heathrow when she could not find her passport and turned aggressive towards officers after being told she could not board her flight. 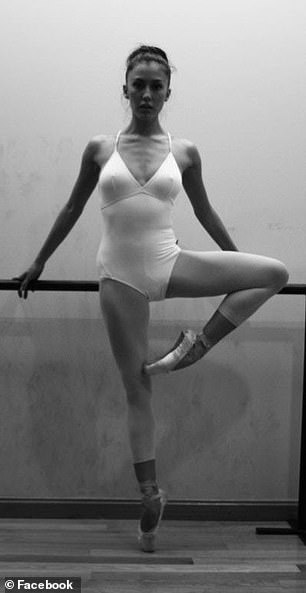 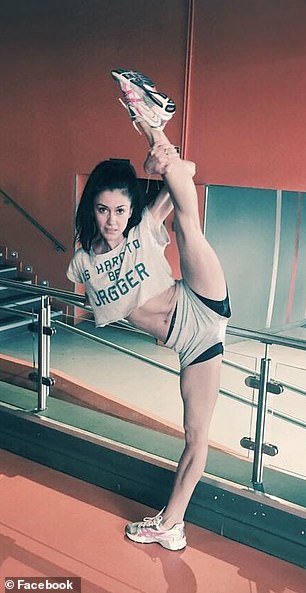 The ballerina kicked off when she could not find her passport in her luggage, which contained a lock knife

Prosecutor Ruxana Nasser said: ‘The defendant was at the airport to take a flight. She missed her flight because she lost her passport and was late.

‘Police arrived at Terminal 2 for another matter and found the defendant very drunk, looking for her passport with another person with her.

‘Due to her behaviour and the fact she was no longer a passenger, they asked her to leave and she refused.’ 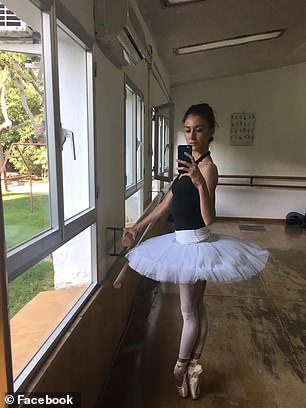 When she was arrested Rivera deliberately dragged her legs and had to be half carried out.

As she was being loaded into the police van, Rivera scratched two officer’s arms.

When one of their colleagues tried to intervene, he was kicked in the groin for his troubles,

‘He received a kick to the groin area, she was kicking with her legs,’ said Ms Nasser.

‘In particular she kicked him in the left testicle.

‘He said it was very painful and made him feel nauseated.’

Rivera was later interviewed and said she had assaulted police officers in Madrid in the past.

‘I do not know how to manage myself with police when I drink,’ she told officers.

Rivera appeared in the dock in an oversized dark grey tracksuit with her hair in a ponytail.

Mike Hollis, defending, said: ‘Ms Rivera has apologised unreservedly to the officers for her behaviour.

‘She knows that what she did was completely unacceptable, and that is why she pleaded guilty at the first opportunity

‘She was clearly very drunk at the time she lost her temper with the officers and there is no excuse for it.’ 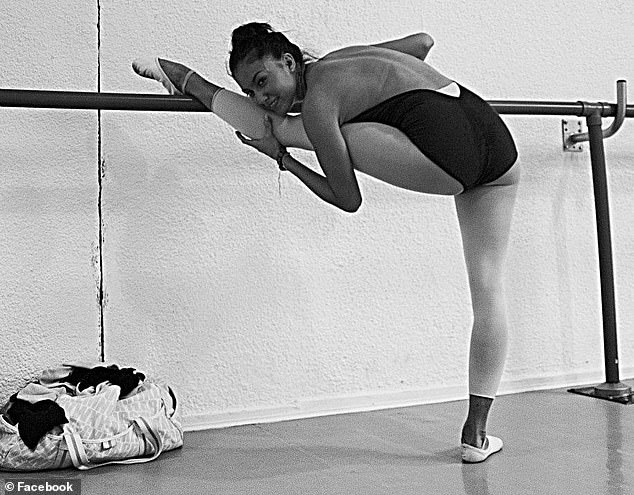 The ballerina has performed in Romeo and Juliet, Copelia and Swan Lake for dance company Danza SXXI

Mr Hollis told the court that the knife had been placed in Rivera’s bag by her ex-boyfriend a month ago.

‘He physically put it in her bag.

‘She had forgotten she had it,’ he added.

‘She trained as a classical dancer and appeared in the ballet in Spain before coming to the UK about a year ago.

‘She has been recently made homeless since splitting up with her ex boyfriend.

‘She has been diagnosed with anxiety and depression, and has on occasion suffered from hallucinations,’ added Mr Hollis.

Judge Sarah Paneth told Rivera: ‘What is clear is that you resisted that arrest for being drunk and disorderly and you did everything you could to avoid being put in that police van, to which you had to be carried.

‘PC Hambleton received injuries, deep scratches to both his arms and significant bruising to his right arm.

‘You were kicking and lashing out in an attempt to avoid being put in the van and you kicked inspector Saunders in the groin.

‘PC Kibbley sustained deep scratches to his arm from you dragging your long fingernails,’ said the judge.

‘You had, that day, a great deal to drink. First, at work, at about 3pm three vodkas, and then one more at your friend’s house, and then more at the bar when you missed your flight.

‘You gave a full accounts and made full admissions. Although you didn’t appreciate you were drunk, it was clear at that interview you were ashamed and remorseful, and apologetic for what you had done.’

‘It was a hysterical sustained reaction resulting in significant injuries although thankfully not permanent ones.

‘Kicking someone in the groin might be regarded as amusing on the cricket field in the course of the Ashes test match, but it is very far from that when it is committed during an arrest,’ said the judge.

Rivera, of no fixed address, admitted three counts of common assault on an emergency worker and possession of a bladed article.

She was jailed for two months and will remain on licence for 12 months after she is released.

Rivera was earlier fined £100 after she admitted being drunk and disorderly at Ealing Magistrates’ Court a day after the incident.

She has been held in custody since her arrest and it is thought she will be released imminently.