A Spanish airline has come under fire after cabin crew objected to a female passenger’s low-cut bodysuit and threw her off the flight because of her ‘attitude’.

Staff at budget carrier Vueling described the passenger’s outfit as a ‘swimsuit’ and claimed she had been ‘abusive’ when confronted about it.

The woman’s sister claimed she had been denied boarding even after friends offered items of clothing for her to cover up.

The passenger, who is Spanish, was intending to fly with her boyfriend for a break in Barcelona but both did not make the journey.

The incident happened as people were boarding a flight from Palma in Mallorca to the mainland.

The woman’s sister took to Twitter to complain, saying: ‘Today the wonderful company @vueling has forbidden my sister from boarding simply for wearing a low-cut bodysuit.

‘Several people left clothes for her to “cover up” but they still did not let her board.’

According to Spanish newspaper Ideal.es, the woman was wearing a denim mini-skirt over of the black bodysuit, as well as trainers.

She jokingly offered to cover up with a sarong when confronted and believes the stewards took offence. She intends to lodge a formal complaint. 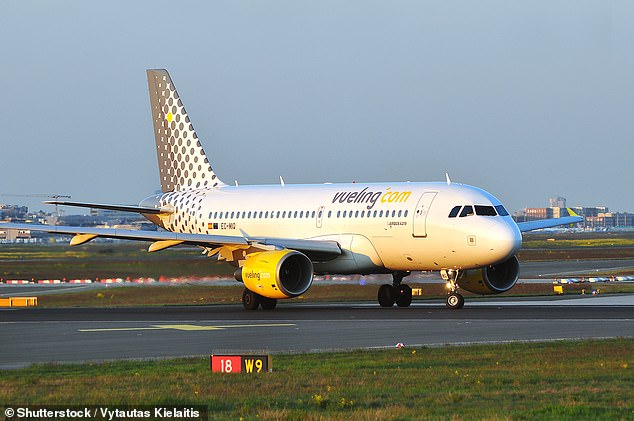 Vueling later replied on Twitter, saying its regulations applied to men and women alike and ‘to regulate their behaviour for the benefit of all.’

‘These conditions establish the power to deny access to passengers whose conduct does not meet these conditions. The passenger was in a swimsuit,’ said a spokesperson.

‘The response to the request of the handling agent was  abusive and is the only reason why it was decided to call the competent authority and not to fly.’

Other passengers said they hadn’t been offended by her outfit and had seen worse on airlines.

One alleged that an air steward said the front of the bodysuit was okay but the low-cut back had criss-cross straps which would have cut into the seat.