A Spanish village that was abandoned by its families 30 years ago to make way for a reservoir has reappeared after the water levels plummeted, revealing the ghostly ruins of houses and a long-lost community.

In a national tragedy, the village of Aceredo was flooded in 1992 when a Portuguese hydroelectric plant closed its floodgates, causing the river Limea to flood the lands and buildings in the surrounding area.

But in a rare occurrence, stunning pictures from the area on Monday show how low water levels in the Lindoso reservoir have revealed the skeletal remains of what were once the homes, farmhouses and granaries owned and operated by the people of Aceredo before they were forced to give up their land.

Many of the walls of the buildings have fallen away over time and the window frames left empty, but some of the structures remain surprisingly intact.

A number of the village’s 70 houses made from stone and wood are still partially standing, and while many have caved in or washed away, parts of their roofs have survived decades of submersion.

The outlines of farmland marked by stone walls have also been uncovered, along with old roads and pathways that run through the small village that was once home to around 120 residents.

Usually submerged ruins of the former village of Aceredo, appear from the Lindoso reservoir hydroelectric plant due to low water level, near Lobios, Ourense province, northwestern Spain, on November 22, 2021 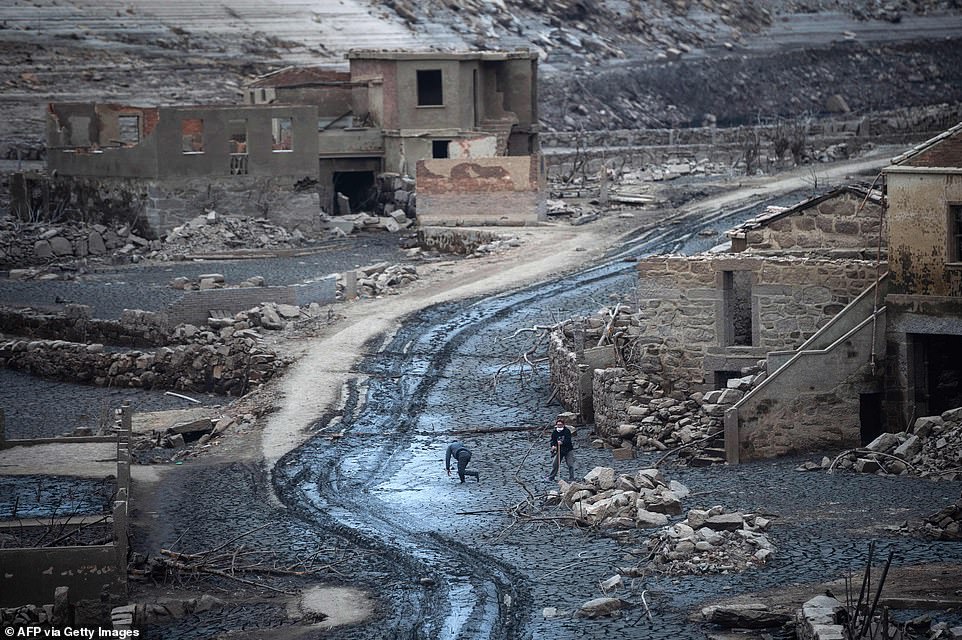 In a national tragedy, the village of Aceredo was flooded in 1992 when a Portuguese hydroelectric plant closed its floodgates, causing the river Limea to flood the lands and houses in the surrounding area. Now, the village is only visible with low water 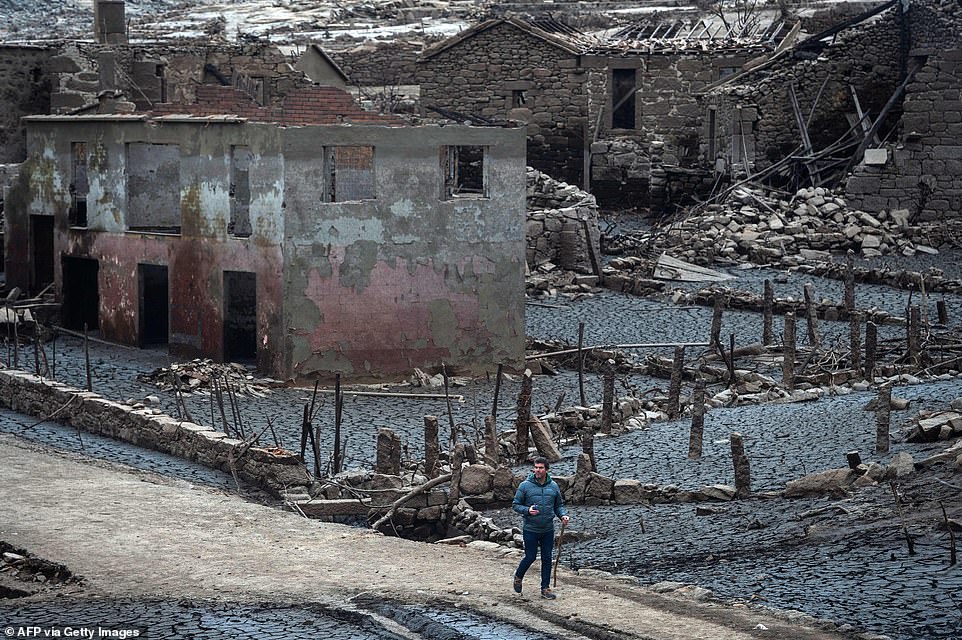 A man walks in the usually submerged ruins of the former village of Aceredo, appear from the Lindoso reservoir hydroelectric plant due to low water level, near Lobios, Ourense province, northwestern Spain, on November 22, 2021 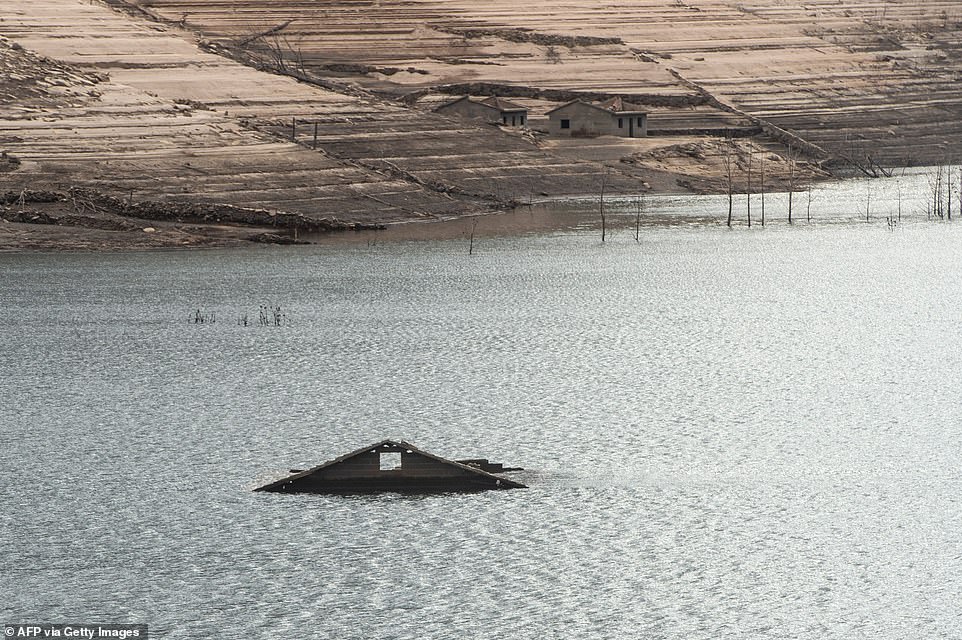 Pictured: A rare glimpse of a building from the submerged village of Aceredo is seen poking out from the Lindoso reservoir 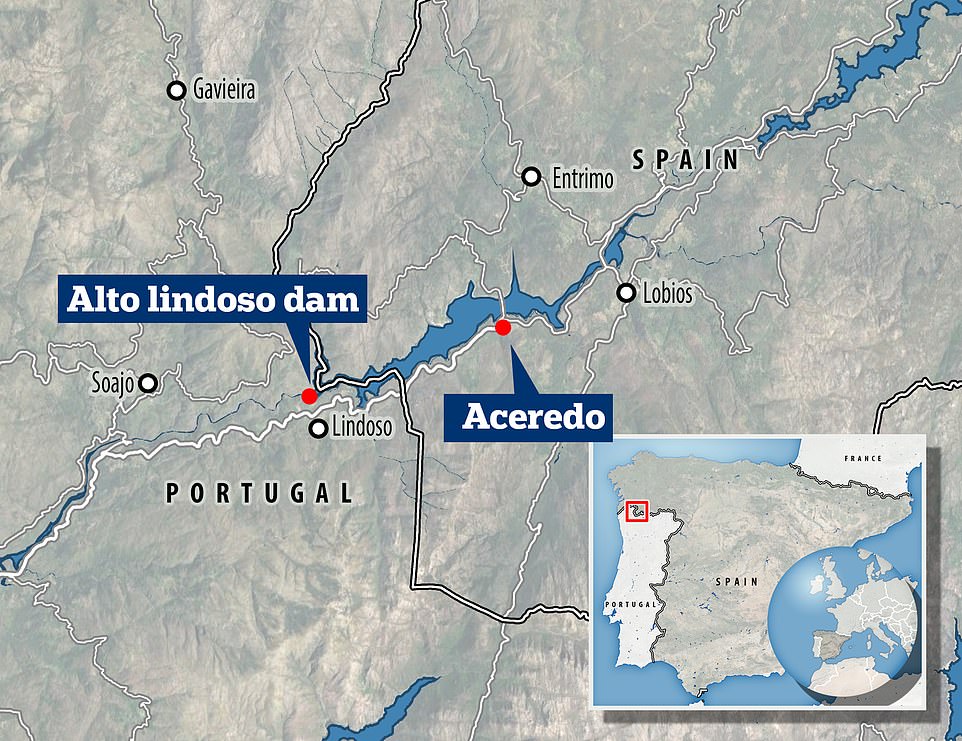 Pictured: A map showing the location of the lost village of Aceredo, which was flooded in 1992 when the floodgates of the Alto lindoso dam were closed, forming the Lindoso reservoir

While some of the lake bed remained submerged in water, the cracked ground that would otherwise be at the bottom of the reservoir was visible on Monday, with people seen searching through the wrecked buildings.

On many of the buildings, water marks can be seen on the walls showing the different water levels over time. Those that were painted have long been stripped of their colour.

Old vehicles and other personal belongings are strewn amongst the ruins, and while anything metal has rusted over time, other items – like glass bottles – remain hauntingly in-place on tables and shelves.

Logs and other lake debris also rest against the structures, while many piles of rubble show nothing but the remnants of buildings that once stood. 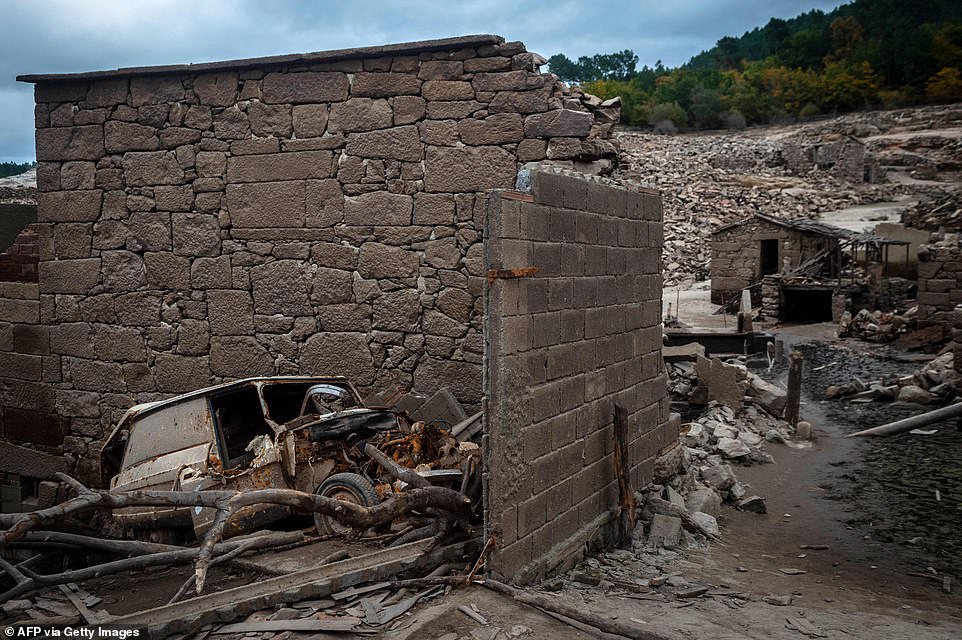 Pictured: The wreckage of a rusted old vehicle is seen, perhaps where it was last parked up against a wall of a building before the village of Aceredo was flooded in 1992. People living in the village were ejected from their homes for the construction of the reservoir, that is currently experiencing low water levels 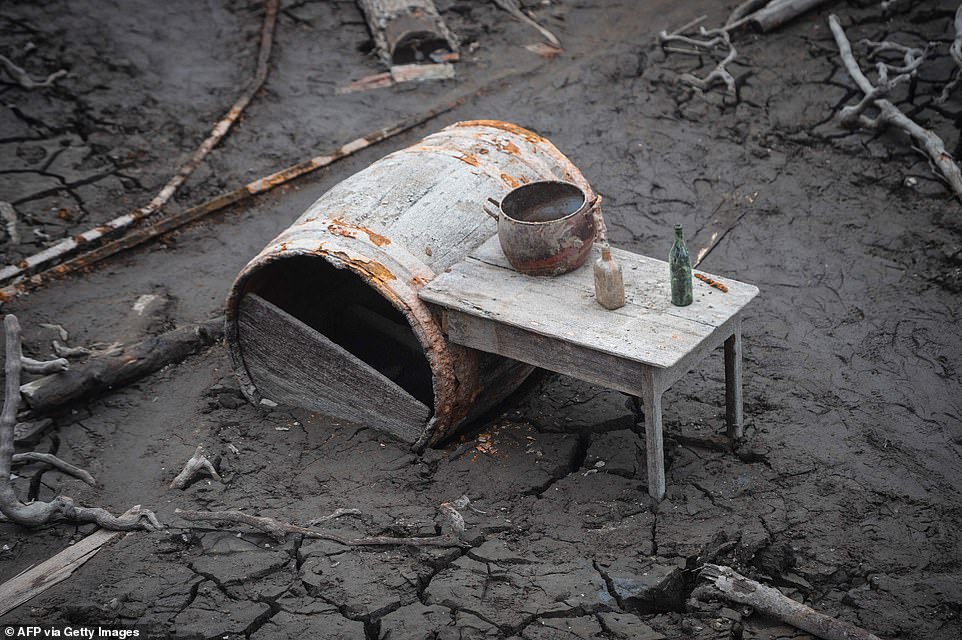 A barrel and makeshift tables is shown half-buried in mud, with a pot and two glass bottles on top of the table, hauntingly in place after being submerged for the best part of three decades on November 22, 2021 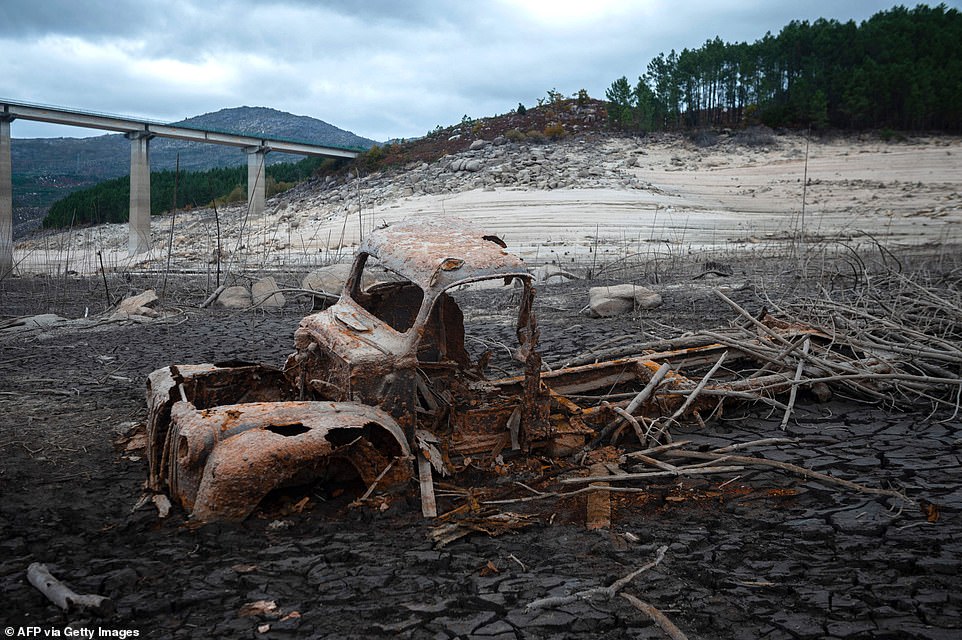 The wreckage of a truck is seen next to usually submerged ruins of the former village of Aceredo, appear from the Lindoso reservoir hydroelectric plant due to low water level, near Lobios, Ourense province, Spain, on November 22, 2021 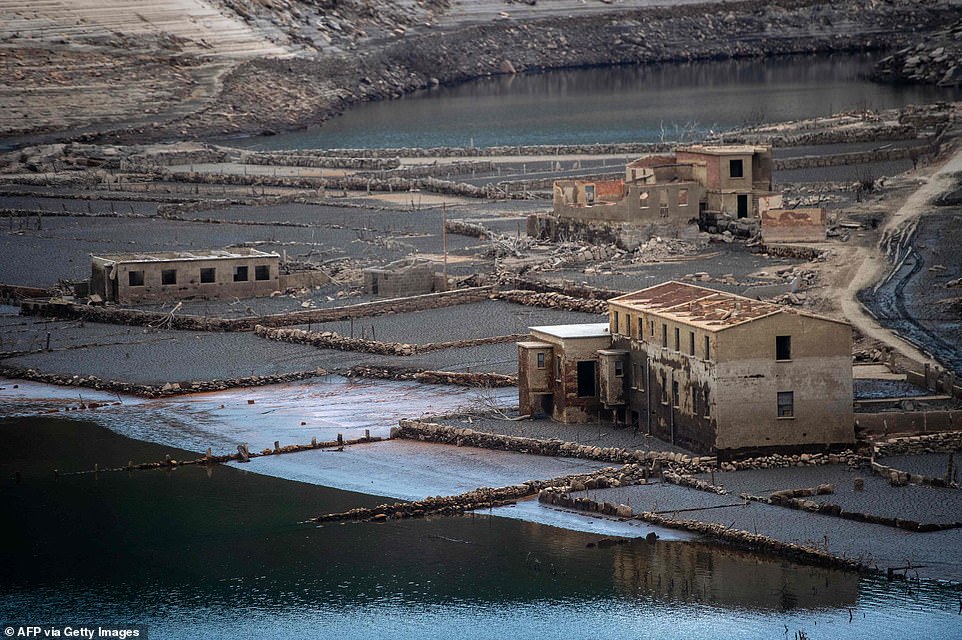 Pictured: With the water in the reservoir almost completely receded, the layout of the village and the outlines of farmyards marked by low brick walls can be seen on November 22, 2021

The tragedy of Aceredo started when an agreement was struck in 1968 between the heads of state from Spain and Portugal – Francisco Franco and António de Oliveira Salazar Salazar respectively – to use their shared border rivers to construct the Lindoso dam.

But the deal and subsequent engineering work came at a price – the expropriation of land and houses belonging to a number of villages and their inhabitants in the region.

In order to remove the residents of the local villages, the Portuguese hydroelectric company EDP began to negotiate. But initially the majority of people living in Aceredo had no interest in leaving their homes.

While some gave in to the amounts offered to them by the company, others held firm, refusing the cave to the intense pressure they said they came under.

However, as soon as the company had ‘convinced’ 51 percent of the people, a forced expropriation was published and there was no turning back – despite demonstrations, hunger strikes and confrontations with the police.

In addition to Aceredo, four other villages – O Bao, Buscalque, A Reloeira and Lantemil – disappeared under the waters when the dam closed, forcing their residents to leave in 1992. 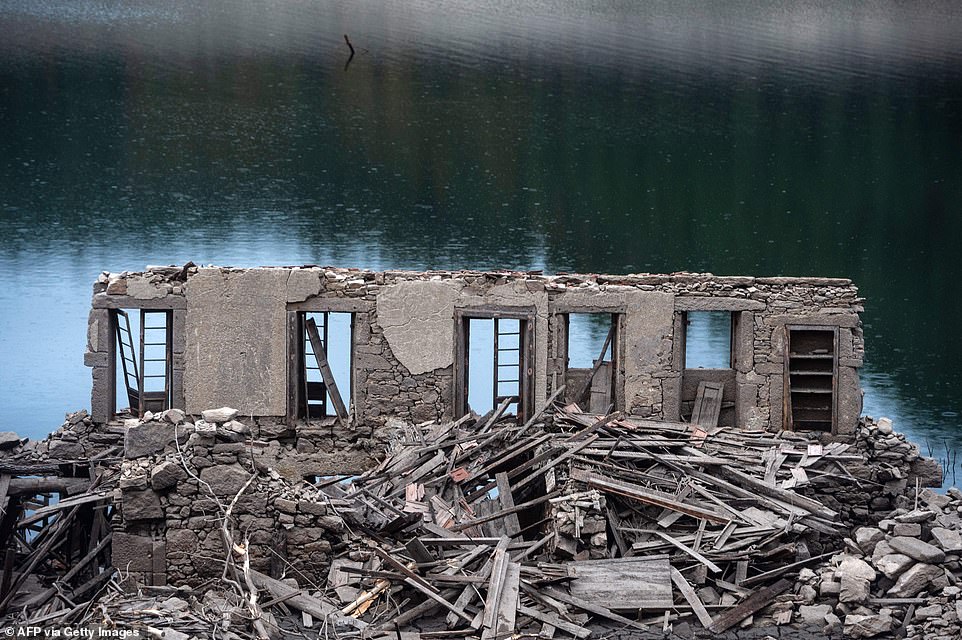 Picured: Only one wall of this building from the former village of Aceredo remains standing after it was flooded in 1992 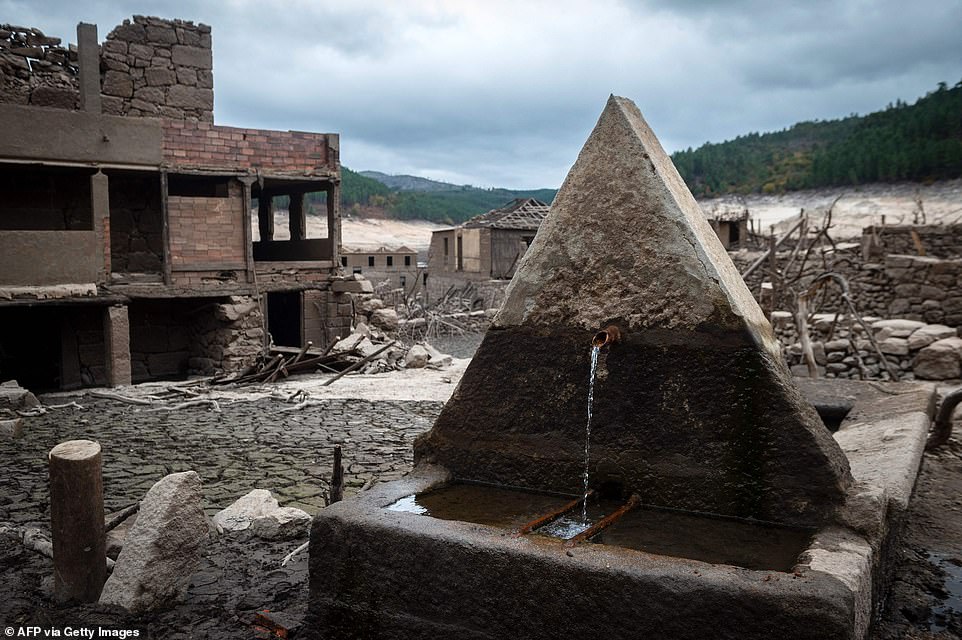 Pictured: A drinking fountain, that is now normally submerged by the reservoir, still flows despite the residents of the village being ejected from their homes in 1992 for the construction of the reservoir 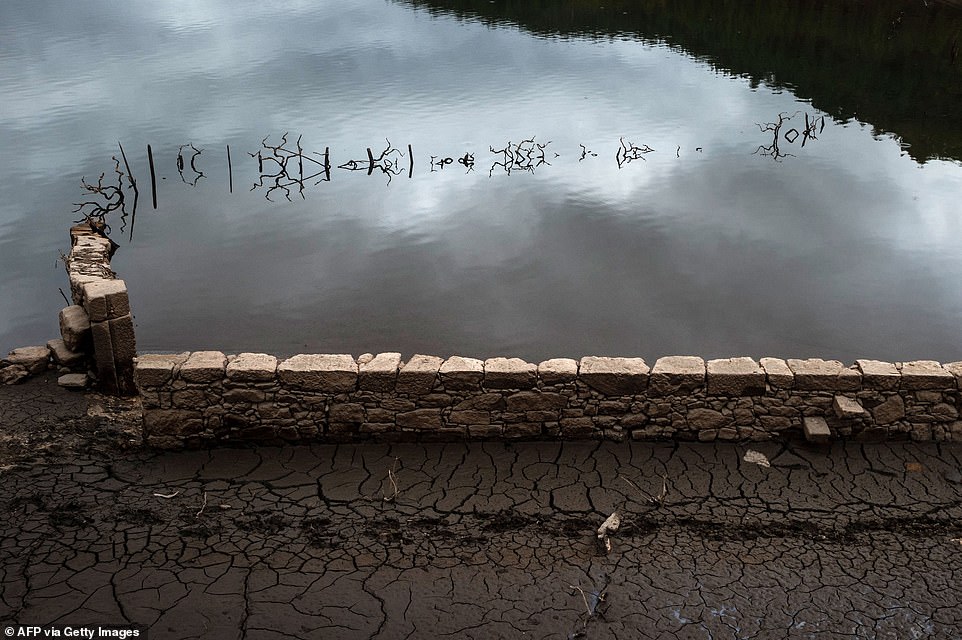 An agreement was struck in 1968 between the heads of state from Spain and Portugal – Francisco Franco and António de Oliveira Salazar Salazar respectively – to use their shared border rivers to construct the Lindoso dam. Despite the local residents fighting to stay, the dam closed its floodgates in 1992 and flooded the region 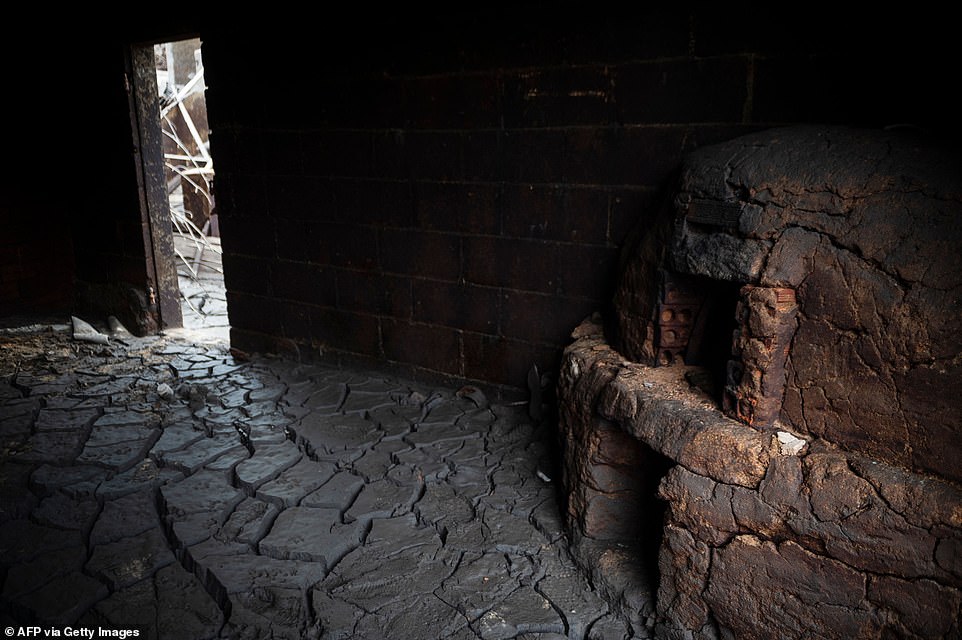 Pictured: Inside one of the homes of the former village of Aceredo. A fire kiln can be seen in-tact, along with the walls of the building. The floor, however, is covered in mud from the lakebed 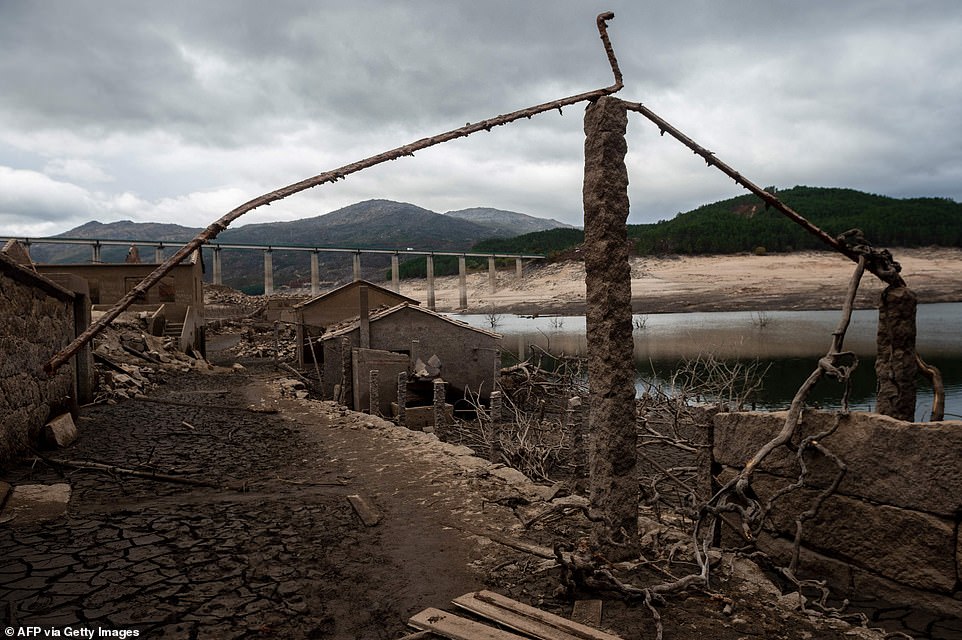 Pictured: The rusted frame of a metal fence is shown, uncovered due to the low water levels of the Lindoso reservoir

Residents of other town higher up had more time to prepare for the flooding. In one case, the people of the village dismantled their church brick-by-brick to re-build it elsewhere, and even had time to exhume their relatives.

But others were not so lucky, with those in towns like Buscalque and O Bao having to swim to safety with nothing but the clothes on their backs, unable to safe their animals which drowned in the rising waters.

It was later discovered that people were lucky to survive, as the EDP did not disconnect power cables, according to Spanish news website Quinemil. 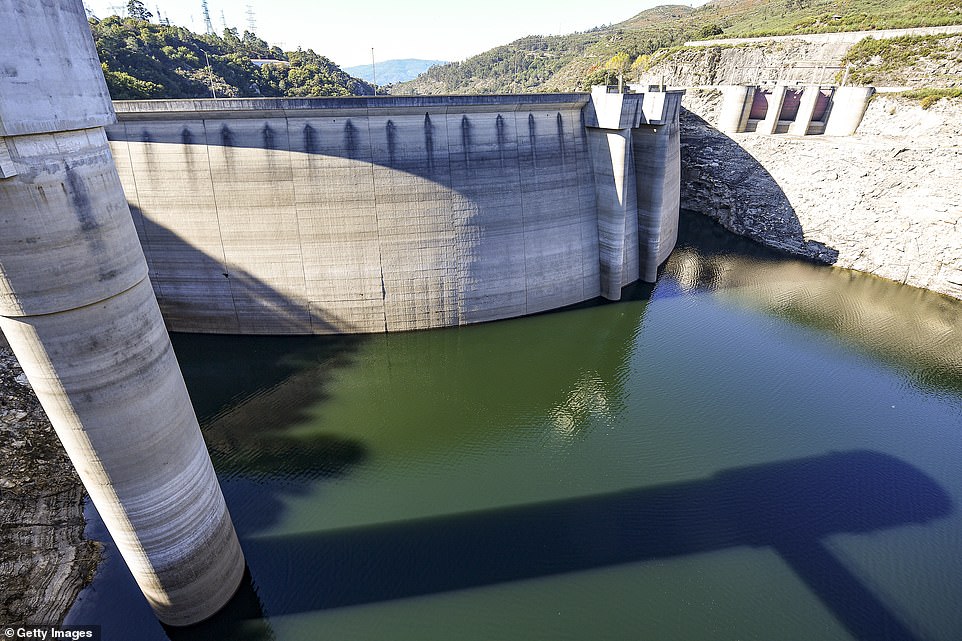 Pictured: A view of the low level of water in the River Lima by the Lindoso reservoir hydroelectric plant on October 27, 2021 in Lobios, Ourense, Spain (file photo). The dam closed its walls in 1992, causing some of the local area home to small villages to flood, with the villages lost below the water for decades

Almost three decades later, Aceredo stands out from the other villages, as it is the only one that is still visible on rare occasion when the water levels drop low enough.

Many of the people who once inhabited the town live nearby, and can visit their old homes, but are often joined by tourists who want to witness the rare phenomenon.

Those who do visit will see the ruined houses of a long-lost town, some personal belongings floating in the water and a fountain that still has flowing water.

In the past, the EDP electricity company has blamed the drop in water levels on low rainfall, according to The Guardian.