Theresa May’s Brexit deal is under threat after Spain threatened to boycott a crucial EU summit on Sunday should it not get written guarantees over the future of Gibraltar.

Spanish Prime Minister Pedro Sanchez warned he might not attend if the leaders do not acknowledge that Madrid holds a veto over the fate of Gibraltar in any post-Brexit negotiation of new EU-UK ties.

Visiting Cuba last night, Sanchez said that Madrid must be allowed to negotiate directly with London on Gibraltar.

He said it must be allowed to give its specific assent to any changes to its relationship to the European Union in a future agreement between Britain and Brussels.

‘If there’s no agreement, it’s very clear what will happen, there very probably won’t be a European Council’ summit, he said.

Gibraltar, a tiny rocky outcrop home to a port and around 30,000 people, is a British territory claimed by Spain and will be a bone of contention as London negotiates a new relationship with Brussels after Brexit day on March 29.

Luis Marco Aguiriano Nalda, Spain’s secretary of state for European affairs, said Madrid wanted London to put in writing that it shared Madrid’s interpretation of the negotiated Brexit deal texts regarding its stance on Gibraltar.

‘We have demanded that it be published by the British authorities before the European Council on Sunday,’ said in Brussels. 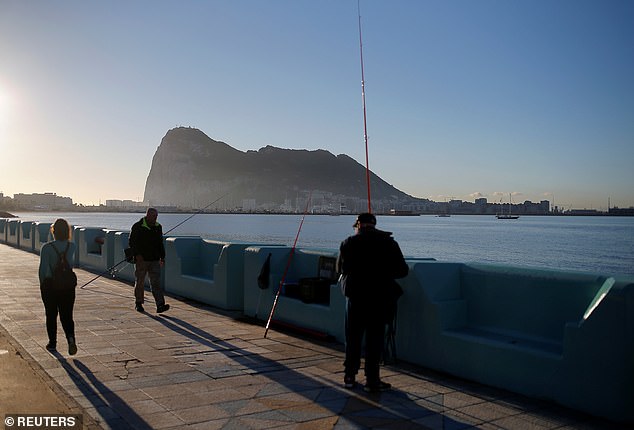 The rock of the British overseas territory of Gibraltar, historically claimed by Spain, is seen from the Spanish city of La Linea de la Concepcion, southern Spain, this morning. Last night Spanish Prime Minister Pedro Sanchez ramped up pressure on Theresa May insisting he be given more concessions over the land

In London, however, a Downing Street source said he did not know what document Aguiriano could be referring to and added: ‘We have negotiated on behalf of the whole of the UK family. That includes Gibraltar and the overseas territories.’

The dispute over Gibraltar is not the only issue threatening Mrs May’s Brexit discussions this weekend.

The EU is threatening to withhold Britain’s right to extend its planned post-Brexit transition period beyond 2020 over a dispute over fishing rights.

It is among the issues up for discussion at the crucial summit tomorrow, and focuses on European fisherman being given access to UK waters ‘well before’ the extension is triggered.

In a draft document seen by the Financial Times, the EU warns that a deal on fishing is a ‘matter of priority’.

The dispute comes as Theresa May heads to Brussels today in the hope of securing fellow leaders’ backing for her Brexit deal.

She is this evening due to separately meet with European Commission president Jean-Claude Juncker and president of the European Council, Donald Tusk. 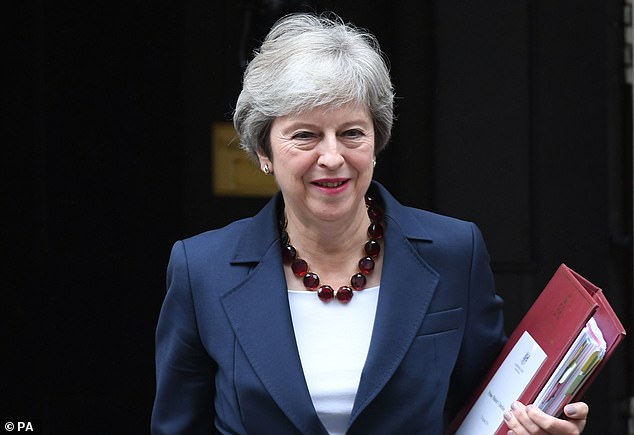 Theresa May (pictured) heads to Brussels this evening ahead of a crucial EU summit on Sunday. Leaders of the EU27 will meet with the aim of endorsing the draft Brexit withdrawal agreement and to approve the draft Political Declaration on future UK-EU relations 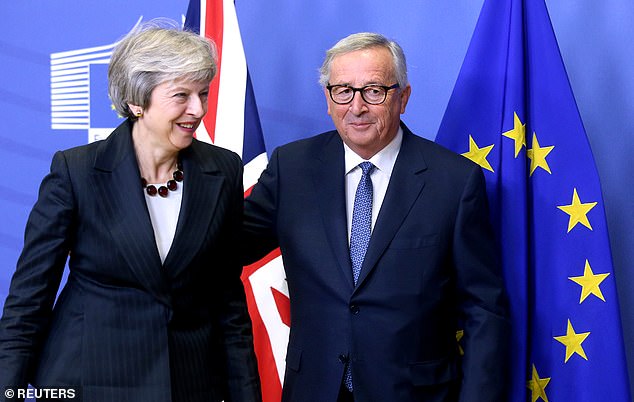 Theresa May will meet separately with European Commission president Jean-Claude Juncker (pictured) and president of the European Council, Donald Tusk

On Thursday Mr Tusk sent a draft of the political declaration to the EU 27 countries.

The document sets out the framework for the future relationship between the UK and the EU.

It has been agreed at negotiators’ level and agreed in principle at political level.

Should Spain not torpedo plans, leaders of the EU27 will meet on Sunday with the aim of endorsing the draft Brexit withdrawal agreement and to approve the draft Political Declaration on future UK-EU relations.

The Withdrawal Agreement is the 585-page legal text that sets out the terms of the UK’s departure.

Among its contents are arrangements for the contentious Northern Ireland backstop and the £39 billion ‘divorce bill’.

The declaration states how trade, security and other issues will work in broader terms.

As Mrs May makes a final push to get approval for her deal in Brussels there is due to be a weekend of vocal discontent at home.

The DUP conference is taking place in Belfast, where leader Arlene Foster is due to tell delegates that the Withdrawal Agreement’s backstop plans are against Northern Ireland’s interests.  Tory Brexiteer Boris Johnson is also expected to speak.

Speaking today, finance minister Philip Hammond claimed that Britain’s draft deal to leave the European Union is the best available solution to safeguard the economy and start to reunite a divided country.

‘This deal is a way of Britain leaving the European Union … with minimum negative impact on our economy,’ Hammond told the BBC.

‘The only thing that is holding the economy back at the moment is uncertainty about our relationship with the European Union,’ he added.

‘If we were to leave the EU without a deal I have no doubt that the consequences for the economy would be very serious indeed, very disruptive and very negative for jobs, for prosperity in the future.’

Hammond, who met DUP leader Arlene Foster on Friday, defended the agreement as good for a country where divisions have been exposed by the June 2016 EU referendum. 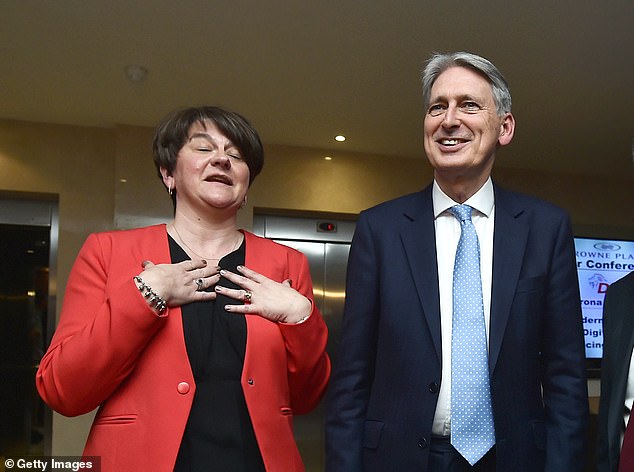 Democratic Unionist Party leader Arlene Foster greets UK Chancellor Phillip Hammond as he arrives to speak at the DUP party conference yesterday. He defended the draft Brexit agreement as good for the country