Spare: How the early days of Meghan and Prince Harry’s romance unfolded

Prince Harry has opened up about the early days of his relationship with Meghan in his bombshell memoir Spare.

He recounted the moment he first laid eyes on his future wife, and later when they first met at 76 Dean Street, one of Soho House’s private member clubs in London – and told of the passionate reunion between them after spending weeks apart in the summer of 2016.

He said he and Meghan spent the night reunited at one of the Soho House branches on the day of the anniversary of Princess Diana’s death, and recalled waiting ‘breathlessly’ outside his wife’s room until she opened the door and ‘pulled me inside’.

The steamy details are just some of the moments the Duke of Sussex, 38, shared in his memoir, which hit shelves on Tuesday. Here, FEMAIL details the how the early days of the couple’s romance unfolded, according to the book…

HARRY SETS EYES ON MEGHAN FOR THE FIRST TIME

In a section of the book entitled ‘The captain of my soul’, Prince Harry writes about the first moment he sees Meghan – on a friend’s Instagram page, using a dog filter (pictured in a different clip using a similar filter)

The duke recounted coming across a video of Meghan with their mutual friend Violet Von Westenholz on Instagram and being immediately drawn to her ‘angelic face’ – despite the pair using a funny dog filter.

‘I’d never seen anyone so beautiful,’ he said, saying it felt like a ‘punch in the throat’ because of Meghan’s ‘wild joy’.

The duke said the short clip stopped him in his tracks and he kept returning to it – before messaging their mutual friend, who said she could ‘connect’ the pair.

Meghan then messaged Harry on Instagram, according to the memoir, before the duo exchanged numbers and eventually agreed to go on a first date.

Harry next recounted the moment he first saw his future wife in person when they met at 76 Dean Street in London, one of Soho House’s private member clubs.

Describing her outfit, Prince Harry wrote: ‘She was wearing a black sweater, jeans, heels. I knew nothing about clothes but I knew she was chic.’

He explained how he was stuck in traffic ahead of their first meeting and had to explain via text that he was running late.

Harry said he eventually arrived half an hour late, ‘red-cheeked, puffing, sweaty’ and apologised. The two enjoyed a beer together before Meghan headed to separate dinner plans.

The Duke of Sussex and his now wife, Meghan, thought to be pictured on their second date

After FaceTime calling each other following their first date, Meghan and Harry agreed to meet the very next day before the American actress had to leave to return to Canada for filming of hit legal drama Suits.

They met again at Soho House on July h 2016 and upon Meghan’s arrival at the date, Harry recalled gifting her red, white and blue cupcakes in honour of Independence Day.

The date soon became steamy between the two, with Harry recalling that the couple were in the middle of a kiss – ‘not their first’ – when their waitress once again arrived to see if they wanted anything else.

Their meals, Harry said, were left uneaten as the ‘conversation flowed’ – and eventually the duo agreed to spend a week together in the summer in Botswana. 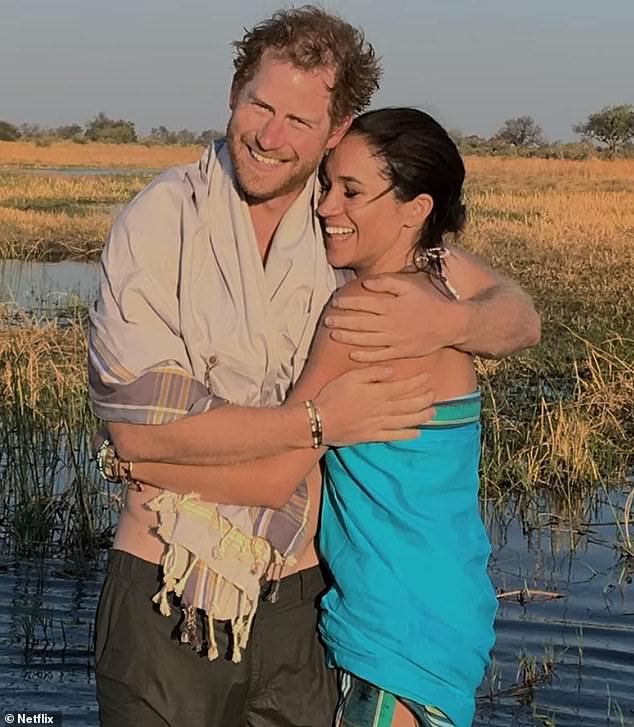 Harry and Meghan on their third date in Botswana

Meghan arrived to the house they would be staying at and Harry said he presented her with a chicken-salad sandwich, wrapped in clingfilm.

He recalled that there was an awkwardness after their first hug – because despite having talked and FaceTimed ‘countless times’, this was the first they’d seen each other in person since their first two dates.

The couple toured the local area before camping in a tent outside. At the end of the week, as the pair were separated, Harry said his future wife began to cry.

Harry continued on to a lads’ holiday in Maun, Botswana. He recalled wrecking his phone and wanting to send a gift to Meghan in a second letter. He ventured while in ‘lion country’ to find flowers to include in the note. 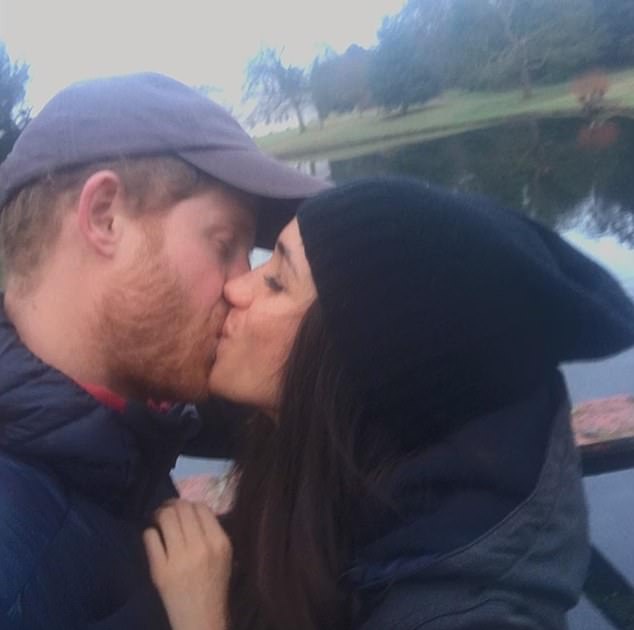 In his memoir Spare, the Duke of Sussex, 38, recounts the very passionate way in which he and Meghan reunited in London after spending weeks apart in the summer of 2016

The pair next met one another in person in August, with Harry recounting the very passionate way in which he and Meghan reunited in London after spending weeks.

The royal revealed he and Meghan spent the night at one of the Soho House branches on the day of the anniversary of Princess Diana’s death, and recalled waiting ‘breathlessly’ outside her room until she opened the door and ‘pulled me inside’.

Hinting the passionate clinch that followed their reunion, he wrote: ‘I want to say we hung a “Do Not Disturb” sign on the door. But I don’t think there was time.’

Harry recounted how Meghan had instructed him to meet her at the Soho House where she was staying.

He revealed in the book how she texted him that she had made it into the UK while he was laying flowers on his mother’s grave at Althorp with the Prince of Wales. Harry drove back to London with William and met Meghan later that day.

He said in the book that she had told him to take a secret way to the hotel and a freight lift, where he met a friend of hers named Vanessa who led him to her hotel door.

Meghan opened the door, her arms reaching for Harry, he recalled. ‘She pulled me inside and thanked her friend in one fluid motion, then slammed the door quickly before anyone saw.’

It is not known which Soho House location the duke was referring to, but it may be the same one where they had their first date, 76 Dean Street in Westminster.

In one section of the book, Harry wrote about planning a meal with Meghan after spending the night together at Soho House in London.

The two decided to meet in a local Waitrose, dressing up in disguises to do so.

The duke writes: ‘Equally anonymous, I grabbed a basket, walked casually up and down the aisles.

‘Beside the fruit and veg I felt her stroll past me. Actually, it was more a saunter than a stroll. Very saucy. We slid our eyes towards each other, just an instant, then quickly away.’

Meghan and Harry early in their relationship. Harry admitted he was ’embarrassed’ to show Meghan his home, Nottingham Cottage, after their shopping trip to Waitrose, and revealed his future wife likened it to a ‘frat house’

Harry admitted he was ’embarrassed’ to show Meghan his home, Nottingham Cottage, after their shopping trip to Waitrose, and revealed his future wife likened it to a ‘frat house’.

The duke admitted that his London home – where he lived for six years – was ‘no palace’.

Although the royal said he had been looking forward to showing Meghan his living quarters shortly after they started dating in 2016, he worried that the two-bedroom cottage might not live up to expectations.

The father-of-two wrote: ‘I was excited to welcome Meg to my home, but also embarrassed. Nott Cott was no palace. Nott Cott was palace adjacent – that was the best you could say for it.’

As he watched Meghan walk up the garden path to his home, Prince Harry said he was ‘relieved’ that she ‘gave no indication of disillusionment’.

However, that changed when the duchess stepped inside the cottage – where the ceilings are ‘dolls’ house low’. He added: ‘Then she said something about a frat house.’

Prince Harry said he had never noticed how ‘shabby’ the furniture in his home was before – with the then Suits actress appearing particularly unimpressed with his beanbag chair which matched his brown sofa. 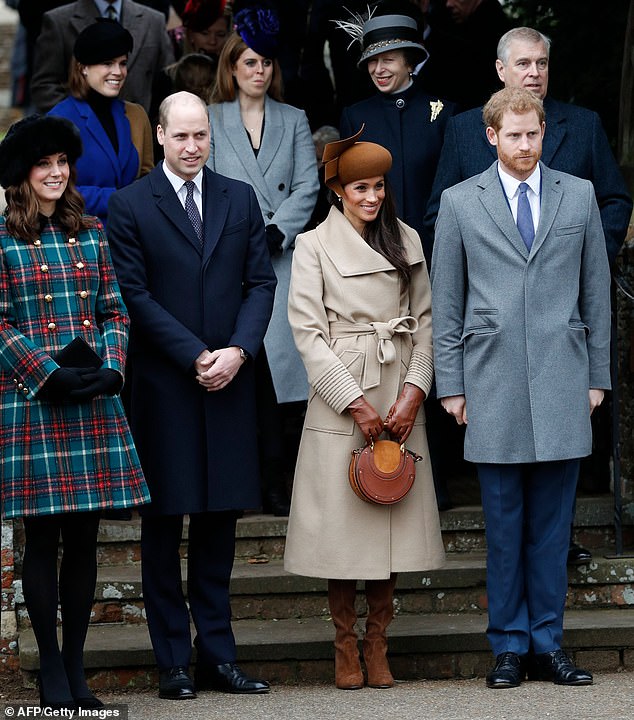 Prince Harry introduced Prince William to Meghan in late 2016. Pictured: The Prince and Princess of Wales and Duke and Duchess of Sussex in December 2017

In his memoir, the duke described the moment he introduced his older brother to his girlfriend as a ‘classic collision of cultures’.

The meeting took place in late 2016 at the Prince and Princess of Wales’s Kensington Palace apartment, shortly before Prince Harry and Prince William went on a shooting trip.

The duke explains how Meghan had already met Princess Eugenie, her then-boyfriend Jack Brooksbank, the Duchess of York, Prince Andrew and the Queen.

Describing the short walk from Harry and Meghan’s home Nottingham Cottage to Apartment 1A, the duke admitted that he was more nervous for his girlfriend to meet William than anyone else.

When his brother answered the door, Harry says William was a ‘bit dressed up’ in smart trousers and a shirt.

He wrote: ‘I introduced Meg, who leaned in and gave him a hug, which completely freaked him out. He recoiled.’

Giving some context to the awkward encounter, Prince Harry said his brother wouldn’t usually hug someone he didn’t know.

In contrast, Harry explained how this was just Meghan’s way of greeting strangers.

He continued: ‘Maybe Willy expected Meg to curtsey? It would have been protocol when meeting a member of the Royal Family for the first time, but she didn’t know and I didn’t tell her.’

After ‘exchanging a few warm words’ in the doorway, the Prince of Wales invited the couple into the flat – prompting Kate and William’s black cocker spaniel Lupo to start barking.

When the couple asked after Kate, William told them that she was out with their children George and Charlotte.

Following the brief meeting, Meghan returned to spend her first night alone in Nottingham Cottage while the brothers embarked on their shooting trip.