A father who lost a leg in a horrific shark attack now fights against culling and says he holds no animosity towards the predators.

Glenn Dickson had to have his right leg amputated after he was attacked by a Bull Shark near Hinchinbrook Island, north of Townsville, in February 2017.

He had just speared a fish and was making his way to the surface when the shark attacked, biting his leg from below and tearing a huge chunk of flesh away. 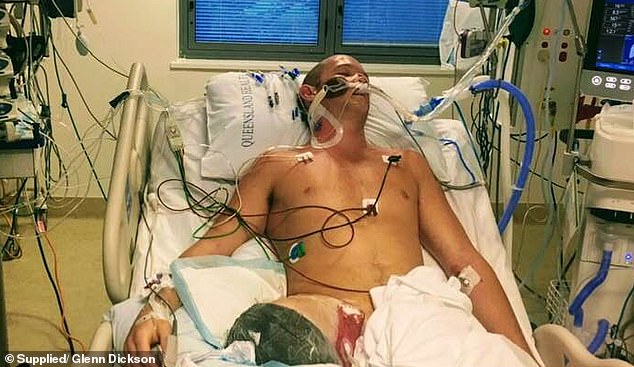 He felt the predator latch onto his leg and thrash him around violently before the water around him instantly filled with blood.

‘Things immediately went into slow motion, in the first few micro seconds I remember hoping it was just one of my friends grabbing my leg,’ Mr Dickson told Daily Mail Australia.

‘Then I knew it wasn’t, I felt like I was in a washing machine it was thrashing me with such force and power, I was a rag doll.’

He said gauging time was hard in the moment but it felt like the whole ordeal lasted one minute.

‘Once I realised what was happening I went into full survival mode,’ he said.

‘I could actually see the shark circling in the water, it seemed like it was sussing out if I was decent to eat or not.’

The shark eventually came in for another go again however he said he couldn’t be sure it was even the same shark.

‘It was a feeding frenzy,’ he said. 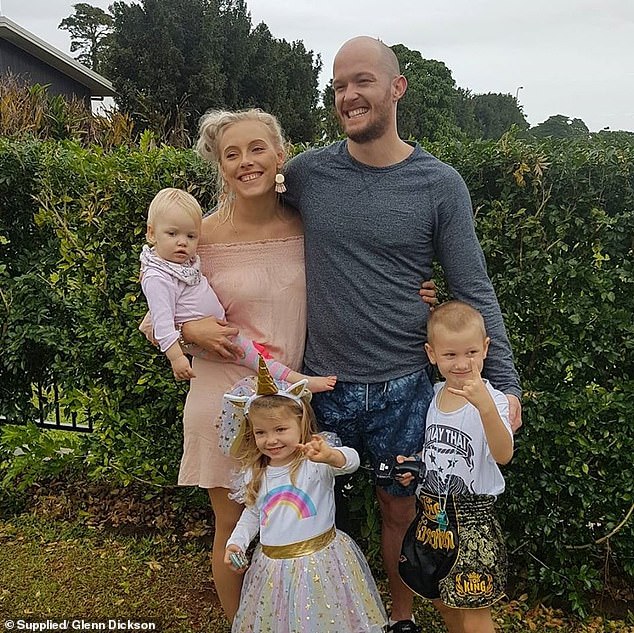 His three friends were able to pull him from the water and if not for their quick thinking Mr Dickson certainly would have died there on the boat’s deck.

They used a shirt to tie a makeshift tourniquet around his leg which had been shredded by the Bull Shark.

‘It looked like a big slice of watermelon cut out of my leg,’ he said.

As two of the men tended to Mr Dickson the third got behind the wheel and rushed back to the shore as quickly as possible.

‘I was in and out of consciousness, I probably passed out about six times after losing so much blood,’ Mr Dickson said.

Once on the shore he was rushed to Cairns Hospital where his leg had to be amputated. 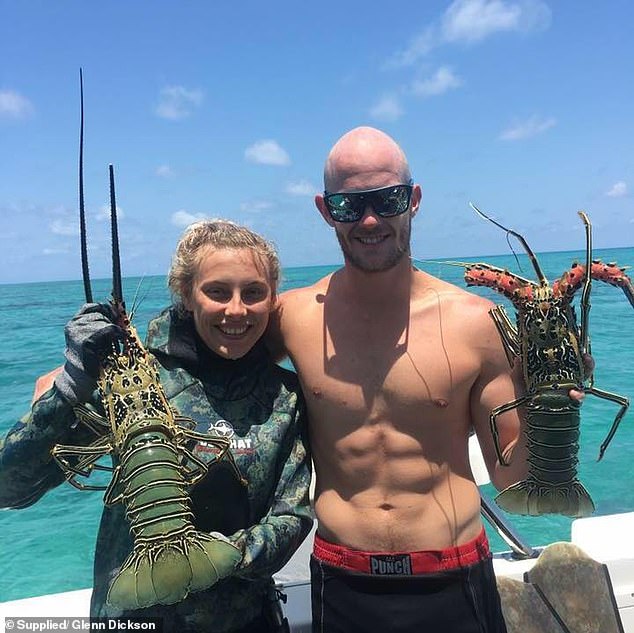 As an avid spearfisherman and dedicated personal trainer Mr Dickson had to adapt to losing his leg however he is now an outspoken critic of shark nets, baiting and drum lines (pictured with wife Jesse-Leigh Dickson)

‘Had that bleeding not been controlled with direct pressure and a tourniquet applied, and blood being given to him by the helicopter rescue crew,’ he said.

WHAT IS A DRUM LINE

A drum line is an aquatic trap designed to lure in and capture large sharks by using baited hooks.

They are generally used near popular beaches and are designed to reduce the number of sharks in the area.

By extension the reduction is supposed to lower the probability of a shark attack.

‘I’d give him another 60 seconds and it’s quite possible this gentleman would’ve died from his injuries.’

Mr Dickson said he was probably even closer to death.

‘I remember having a choice of whether to live or die, it was extreme tiredness and I could have just went to sleep,’ he said.

However he said it was the thought of his loving fiance Jesse-Leigh Dickson, who was pregnant with their third child, and their two young children that helped him stay alive.

‘When I got to the hospital my parents were already there because they live in Cairns and my wife was on the way,’ he said.

‘I remember thinking I’ve fought this far and the hardest part was over so I shouted to my parents ”I will survive” as I was taken to surgery.’

An active man before the attack Mr Dickson was an avid Muay Thai fighter and personal trainer which he attributed to his survival and recovery.

‘Being in good shape I think helped me survive on so little blood,’ he said. 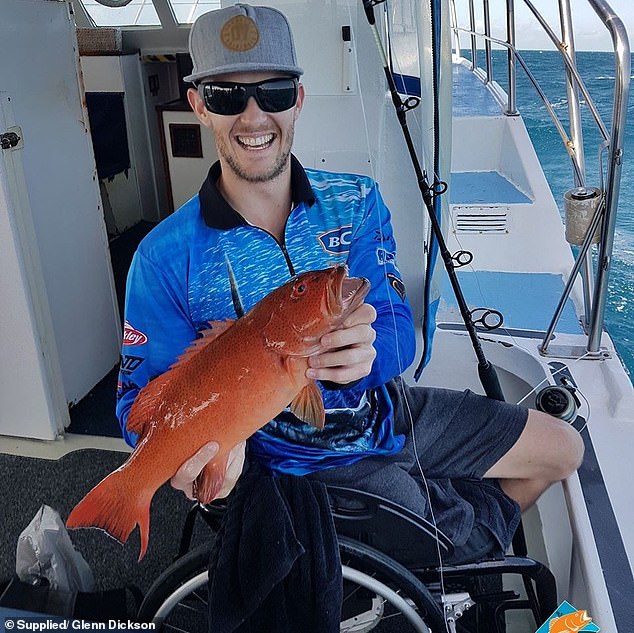 He didn’t let the life altering attack change his life forever and he was back in the water within three months.

Mr Dickson now tours as a motivational speaker to share messages of strength and survival in the face of almost certain death.

‘Everyone faces adversity in their life, in one way or another, and I try to inspire my clients to fight through any adversity and I relate my story in doing that,’ he said.

WHAT IS A SHARK NET

Shark nets are not a barricade and do not keep sharks from making it to the shore.

Generally between 150m in length and up to six metres tall.

Designed to entangle sharks but are only in the water for small windows in the year.

Since being implemented shark nets have killed 15,000 animals besides sharks.

He also openly defends sharks against culling and drum line baiting, recognising the importance of the predators.

‘Sharks, like everything, are important to the eco-system and we do enough damage as it is, we don’t need to kill off an entire species that is critical to the ocean’s eco-system,’ he said.

Mr Dickson said he is ‘100 per cent’ against culling, drum lines and shark nets despite anyone arguing they may have prevented his attack.

‘We go into the water and play around with their food source, something is eventually going to happen when you do that,’ he said.

‘I think by killing sharks on drum lines you actually create a more dangerous situation because other sharks also come into the area looking for that same meal.’ 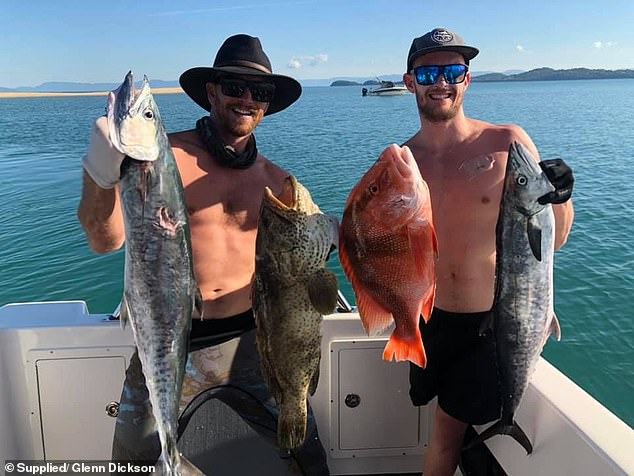 ‘I think by killing sharks on drum lines you actually create a more dangerous situation because other sharks also come into the area looking for that same meal,’ Mr Dickson (pictured right) said

Another of his sticking points for shark nets is the indiscriminate way in which they catch and ultimately kill other species.

‘They are trying to think of better ways to do it without killing sharks because they are aware it would create an unhealthy eco-system to cull them,’ he said.

‘If you choose to go into the water where these pre-historic animals are then you need to be aware they will act on their pre-historic instincts.

‘They aren’t targeting people directly, if they were we would be seeing a lot more attacks.’

He said the oceans has been home to sharks for millions of years before humans evolved and decided to encroach. 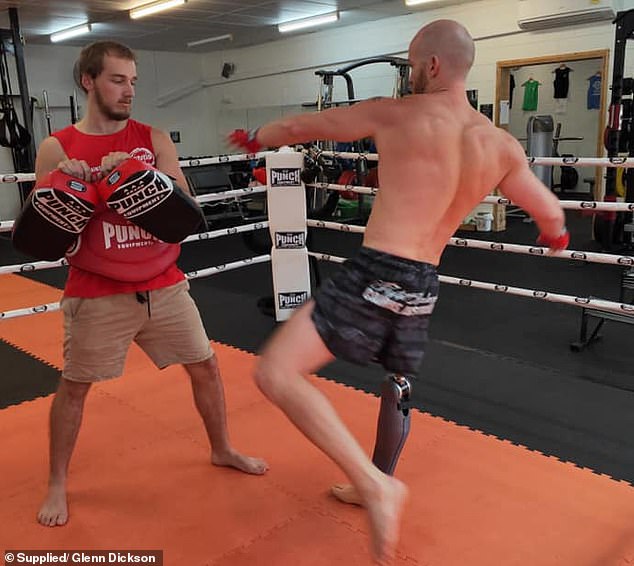 ‘It’s the risk you take every time you get into the ocean,’ he said.

Mr Dickson said he believes if sharks truly saw humans as prey there would be countless more attacks.

‘Nets are simply ineffective at keeping bathers safe but are really good at drowning iconic and harmless wildlife like turtles, dolphins and beautiful hammerheads,’ he said.

‘The science shows that there is no evidence between the abundance of sharks and the likelihood of being bitten.

‘What will keep people safe, is a greater awareness of the ocean environment.’ 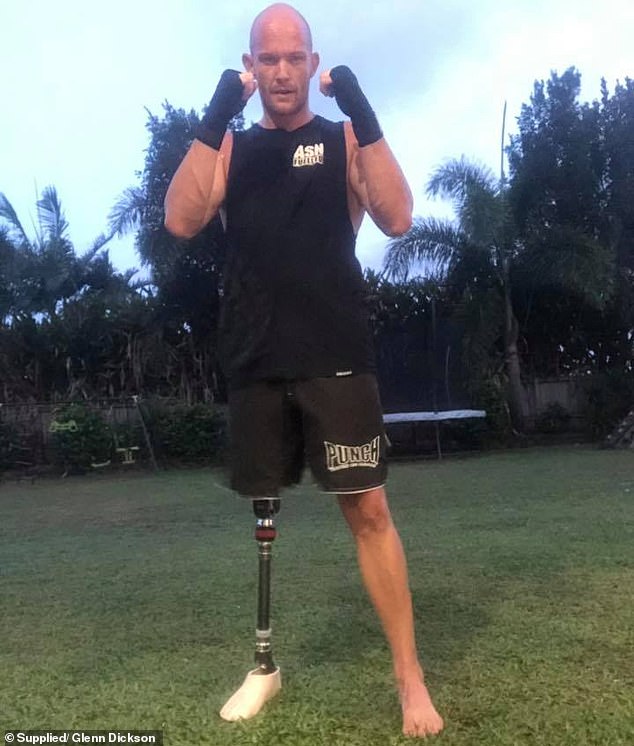 Mr Dickson said people who supported shark nets, drum lines or baiting needed to research sharks and the ocean’s eco-system closer to realise the importance of the predators