A special constable and his Hungarian wife flew in women from eastern Europe to work as prostitutes and enjoyed ‘luxury lifestyles’ from the proceeds, a court heard.

Ivett Szuda, 32, and Karl Ring, 34, allegedly paid more than £100,000 rent for apartments for the women to use in Chelsea, including a flat at Chelsea Cloisters.

Mother-of-two Szuda was the point of contact for Hungarian women who ‘answered online adverts offering work for prostitutes’, and jurors hears they used the money they generated to pay for holidays and designer clothes.

The pair are accused of running a website called Kensington Angels advertising more than 100 prostitutes at one point, Isleworth Crown Court heard.

Ivett Szuda, 32, left, and Karl Ring, 34, right, are accused of running a prostitution ring in Chelsea by enlisting eastern European women online and putting them up in flats in Chelsea

The women were told they could make up to £300 a day and would split half their earnings with the couple, the court heard.

Ian McLoughlin, prosecuting, said Szuda was also known as Eva by the girls.

He said one of the women became a sex worker after working for the couple as their nanny.

Ring made a profile for her on Kensington Angels and asked her if she would like to work as a prostitute, the court heard.

Mr McLoughlin said the nanny declined, but her family in Hungary were experiencing financial difficulties, so she accepted the offer and moved out of the house into an apartment in Barons Court.

He said: ‘The circumstances for her family took a turn for the worst. She decided to start working for the couple as a prostitute.

‘It was decided that she should stop working for the couple as a nanny.’

Ring was employed by the Metropolitan Police as a special constable from 2013 to 2015, jurors heard.

Szuda has no record of working in the UK nor or claiming benefits, the court was told.

But one of the women who worked as a prostitute for Szuda and Ring said the couple led a lavish lifestyle with the cash they made.

Mr McLoughlin told the court: ‘She said that both defendants liked the good things in life.

McLoughlin told jurors how the apartment at Chelsea Cloisters was paid for.

‘The rent for the premises was paid each month from Ms Szuda’s bank account until it was paid by a family member.

‘The occupier was also given as Ms Szuda’s mother. 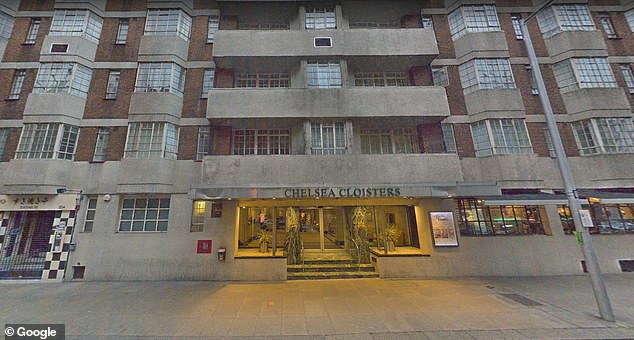 The court heard the couple paid more than £100,000 in rent for apartments for the women, including at Chelsea Cloisters, pictured

‘The story focused on a man who was a donor to a major party.You should ignore it so far as your decision making is concerned.

‘You should make your decision making on what you hear in the court.’

Mr McLoughlin said 11 women are named on the indictment as having been controlled by Szuda and Ring for the purposes of prostitution.

But he claimed many more unknown women worked for them.

He added: ‘The women by and large have come voluntarily.

‘However willing a particular individual concerned may have been the moving of anyone into the UK if it’s found that you are going to control them in prostitution is an offence.’

Police officers found £20,000 in cash at the address, jurors heard.

Ring and Szuda both deny 12 counts of controlling prostitution for gain, four counts of trafficking for sexual exploitation and one count of possessing criminal property.

Szuda alone denies three counts of arranging or facilitating travel with the view to exploitation.