Almost 200 Australians who were stranded in Cambodia have finally arrived home after a special flight was arranged ahead of coronavirus lockdowns.

The Australian embassy in Cambodia helped arrange the flight which landed in Sydney on Monday morning.

Some passengers had been trying to get out of the country for weeks but many flights from Cambodia were repeatedly cancelled.

All on board will be bused to hotels around Sydney where they will have to isolate for 14 days to prevent the spread of the deadly disease.

The desperate flight was arranged amid growing concerns for the welfare of Australians stuck in the Southeast Asian country after Cambodian Prime Minister Hun Sen ordered cross-border restrictions on any travel between provinces.

A spokesperson for the Australian embassy in Cambodia told AAP there were 164 Australian citizens, plus 20 permanent residents and family members boarded the flight as regular commercial options ‘were drying up fast’.

Travellers were seen leaving the airport with face masks on as they made their way to the awaiting buses.

Passenger Damien Shaw told reporters the flight had been packed with ‘virtually all seats taken’.

‘There was a few empty seats.’ 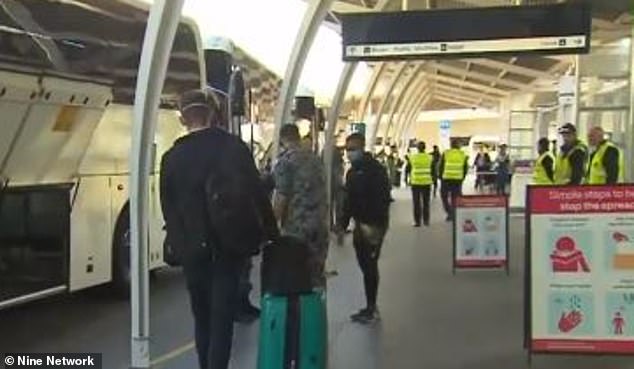 He said he was looking forward to spending two weeks in quarantine as it would give him a chance to cut back on his smoking.

Cambodia has been criticised for its slow response to the coronavirus pandemic, however attitudes have hardened recently and Prime Minister Hun Sen early on Tuesday cancelled next weeks annual Khmer New Year celebrations.

Heavy travel restrictions were also imposed between provinces earlier in the week which added a sense of urgency for the flight, with Australians living in the countryside told to make a speedy trip to the capital to avoid being locked out of the airport.

The embassy said it took ‘a lot of work to make this happen’ in ‘challenging circumstances’ adding this would also help relieve pressure on Cambodia’s healthcare system, which Australia continues to support through its aid program.

‘Great to have been able to help Aussies re-connect with loved ones back home through this flight,’ ambassador Pablo Kang said on his Twitter feed.

‘We thank all involved, including the government, for their assistance, and our passengers for their patience and understanding.’