Teenagers can sleep sounder by wearing special glasses that filter out blue-light or by cutting out evening use of smartphones, tablets and computer screens.

Screens, such as mobile phones and tablets, emit blue-light which can affect the body clock and hormones that help us to sleep.

By cutting back on light exposure in the evening, teenagers participating in a study improved their sleep quality, concentration and mood.

Researchers believe the simple hack is promising to reduce the risk of long-term health problems, as sleep deprivation is also linked to obesity, diabetes and heart disease.

Teenagers can sleep sounder by cutting out evening use of smartphones, tablets and computer screens — or by wearing special glasses that filter out blue-light (Stock image)

Researchers recorded the sleep patterns of 25 smartphone-loving teens at home both before and after the adolescents were given one of two trial treatments.

The first saw the teenagers banned from using their devices 20 minutes before bed in the evening, while the second had them wear special glasses, that filter blue light, in the run up to bedtime.

After just one week of either trial treatment, the teenagers were seen to both fall asleep and wake earlier — and experience less symptoms of sleep deprivation.

These findings add to mounting evidence that too much light in the evenings — especially from devices — upsets the body’s clock and sleep hormone production.

Researchers from the Amsterdam UMC hospital aimed to determine how detrimental blue light was to young people in their own homes.

Initially, the researchers looked at 55 teens, aged between 12 and 17, containing a mix of frequent and limited screened-device users.

The teens that were in front of screens for four hours or more every day suffered as a result.

They, on average, went to sleep 30 minutes later and woke up late compared to those who used devices for less than an hour a day.

They also had more symptoms of sleep loss – the immediate affects are typically fatigue, lack of concentration or focus and bad mood.

‘Adolescents increasingly spend more time on devices with screens and sleep complaints are frequent in this age group,’ said study researcher Dr Dirk Jan Stenvers, who is an endocrinologist at Amsterdam UMC.

‘Here we show very simply that these sleep complaints can be easily reversed by minimising evening screen use or exposure to blue light.

‘Based on our data, it is likely that adolescent sleep complaints and delayed sleep onset are at least partly mediated by blue light from screens.’ 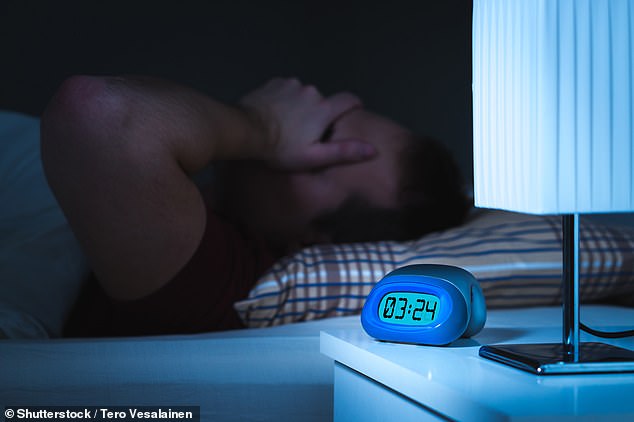 After just one week of either trial treatment, the teenagers were seen to both fall asleep and wake earlier — and experience less symptoms of sleep deprivation (Stock image)

The findings add to the body of evidence suggesting that exposure to too much light in the evening can impair both the body’s internal clock and the production of the sleep hormone melatonin, leading to less and poorer quality sleep.

HOW DOES BLUE LIGHT AFFECT SLEEP AND WHAT CAN YOU DO?

Circadian rhythms are around 24-hours in length.

They vary from person to person – which is why some people are ‘morning people’ and others are ‘night owls’.

Natural factors within the body produce circadian rhythms as well as environmental signals such as daylight.

Irregular rhythms have been linked to various chronic health conditions, such as sleep disorders, obesity, diabetes and depression.

Exposure to light suppresses the secretion of melatonin, a hormone that influences circadian rhythms and helps with sleep.

Melatonin levels rise in the evening and stay elevated throughout the night, promoting sleep.

How can you reduce your exposure?

The blue light emitted by computer, smartphone and tablet screens is particularly harmful in this regard, experts have warned, as this wavelength, common in the daytime, confuses the body when received in the evening.

Getting insufficient sleep not only causes tiredness and poor concentration in the short-term, but can also increase the risk over more serious, long-term health issues.

These complications can include diabetes, heart disease and obesity.

Recent studies have also suggested that the effects of sleep deprivation resulting from extended screen time may have a greater impact on children and adolescents than it does on adults.

However, no previous study had fully explored the impacts of screen time in real-life adolescents in a home setting — or whether such can be reversed.

‘Sleep disturbances start with minor symptoms of tiredness and poor concentration but in the long-term we know that sleep loss is associated with increased risk of obesity, diabetes and heart disease,’ said Dr Stenvers.

‘If we can introduce simple measures now to tackle this issue, we can avoid greater health problems in years to come,’ he added.

With this study complete, the researchers are now moving to investigate whether minimising screen exposure to improve sleep has longer-lasting impacts.

They will also be looking to see if the same relationship exists for adults.

The full findings of the study were presented at the European Society of Endocrinology’s 2019 annual meeting, in Lyon, between May 8–21, 2019.

The presentation abstract is published online.

WHAT ARE THE SYMPTOMS OF SLEEP DEPRIVATION?

The average individual needs around eight hours of sleep each day, although this figure can vary from person-to-person.

Sleep deprivation can either be short-term or chronic.

In the short term, a poor night’s sleep can lead to tiredness, difficulties in concentration and general irritability.

The occasional night of disturbed slumber will not harm your health.

After several nights of insufficient sleep, the mental effects increase in intensity.

Sleep deprivation can also lead to psychiatric symptoms, including disorientation, hallucinations, and paranoia.

Regular sleeplessness can lead to serious medical conditions such as diabetes, heart disease and obesity.

It can also shorten your life expectancy.