Instant car-ma! Speeding driver swerves across traffic to merge onto interstate – in front of police cruiser which flips on its flashing lights and sets off in hot pursuit

This is the moment a speeding driver cut through traffic dangerously to merge onto the interstate and was instantly pursued by a police cruiser.

The footage was recorded on the dashcam of another car near Flamingo Road and Hiatus Road in Florida.

The speeding driver is chased by police for a few moments before they are pulled over – to the delight of the passengers in the car with the dashcam.

At the start of the clip, the driver of the dashcam car is making their way onto the interstate, chatting with their companions.

You can hear both male and female voices in discussion.

They react in shock as the speeding car flies past them, coming from the right and cutting across two lanes. 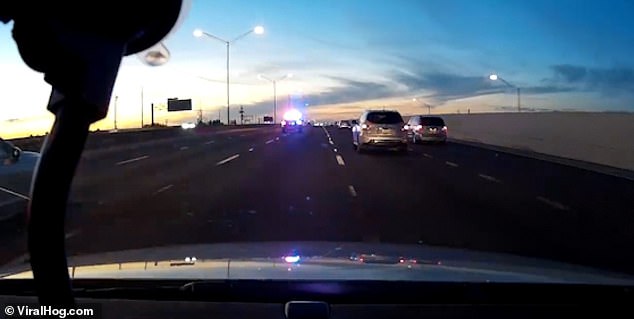 However, a police officer quickly turned on their lights and sped off in pursuit of the speeding driver

After a couple of seconds, one of the passengers cheers as they notice a police cruiser turn on its light and set off after the speeding car.

One passenger expresses how glad he is that the driver is being punished.

Initially it seems as if the driver of the speeding red car was going to lead the police on a chase.

However, the car eventually pulls over and police officers look set to confront him as the clip ends.