With loud engines, screeching tyres and sudden bursts of speed, boy racers are often decried as the most dangerous drivers on our roads.

But a new study shows that those who speed the most are in fact middle-aged – and the worst of all drive upmarket Audis.

A survey of 6,000 British motorists aged from 17 to 80 showed that those most likely to break the speed limit are the 41-60 age band, who do so for 6.6 per cent of their total time at the wheel.

It also found that Audi drivers are the worst culprits, breaking the limit 8.7 per cent of the time, followed by BMW drivers at 8.3 per cent.

A new study shows that those who speed the most are in fact middle-aged – and the worst of all drive upmarket Audis. (File photo). In fact, three out of the five marques driven by the most inveterate speeders are German 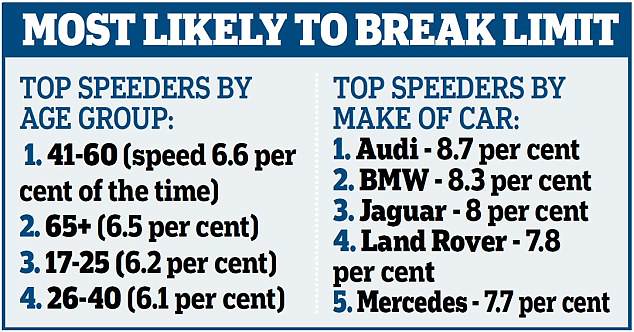 In fact, three out of the five marques driven by the most inveterate speeders are German, with Mercedes in fifth place on 7.7 per cent. Jaguar and Land Rover, both now owned by India’s Tata Motors, come in at third and fourth.

The slowest drivers drive Suzukis, speeding for just 4.2 per cent of their mileage.

Gareth Boyes, 42, of Edinburgh, says he sees a lot of speeding drivers on his commute into Glasgow and most are middle-aged tailgaters.

‘You don’t see boy racers so much any more – but maybe they just aren’t out of bed yet!’ he added.

The new figures come as the Government considers the introduction of graduated licences with restrictions on new drivers – such as not letting them drive at night, carry multiple passengers or drive the most powerful cars.

The speeding research was carried out by Smartdriverclub, which monitors speed and mileage and rewards more careful drivers with cheaper insurance.

‘Motorists in their 40s have that classic combination of intense work and home pressures which can make them heavy-footed when they get behind the wheel.

‘Our customers like the fact that they get a gentle reminder from us if they have been going over the speed limit or braking harshly on a frequent basis.’