Slumped and stupefied in busy town centres, the Spice addicts in these photographs provide graphic proof of the drug’s dehumanising effects.

One is doubled over, frozen on the pavement with his head drooped and arms hanging limply, while others lie comatose on the ground as commuters and tourists pass by.

The latest city to be affected is Lincoln, where Spice users were pictured collapsed and covered in vomit on shop floors and in parks. 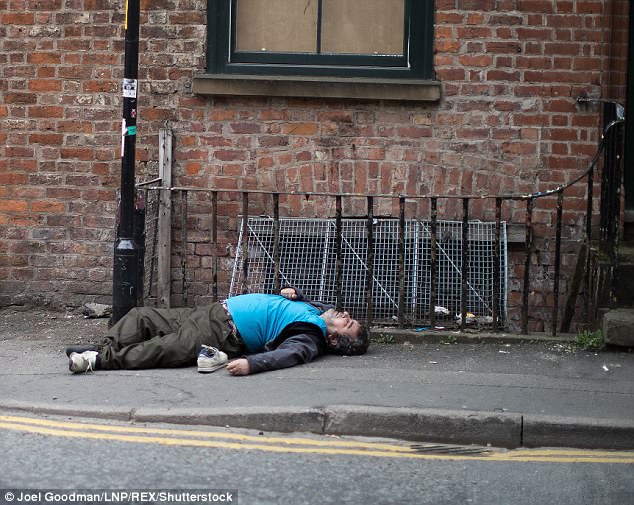 This man in Manchester is lying collapsed on the ground, oblivious to his missing shoe 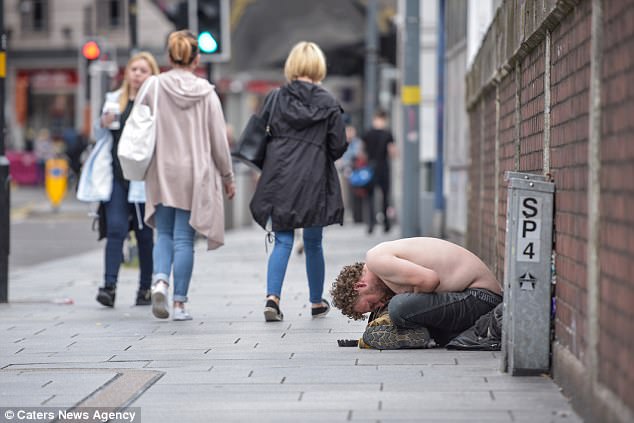 In Birmingham, this man is bent double and stripped to his waist while probably unconscious

One sat in a crumpled heap at the bottom of a public phone box.

Debra Swain, who runs the Riverside Cafe, said: ‘It is like watching The Walking Dead.

‘I get here at 5am when it is pitch black. I am a just a woman on my own. It can be intimidating. Sometimes I lock myself in.’

The Mail has spent months visiting the worst affected areas.

In Manchester, reporters spoke to Ryan, a homeless man on a busy pavement who was lighting up a pipe filled with tobacco and Spice.

The once aspiring motorcycle mechanic has taken Spice daily for two years, adding: ‘It puts you to sleep. It helps you forget about your situation. I was on weed, but this is easier to get hold of and cheaper.’

For just £5, users can buy a small bag of Spice. For £10 more, they can buy a ‘ball’ as large as an orange that can last more than a week.

Despite originally being peddled as an alternative to cannabis, the effects of Spice are different and wildly unpredictable.

Users hallucinate, sweat profusely and their limbs refuse to move as they overheat. It can cause liver failure, kidney failure and death. 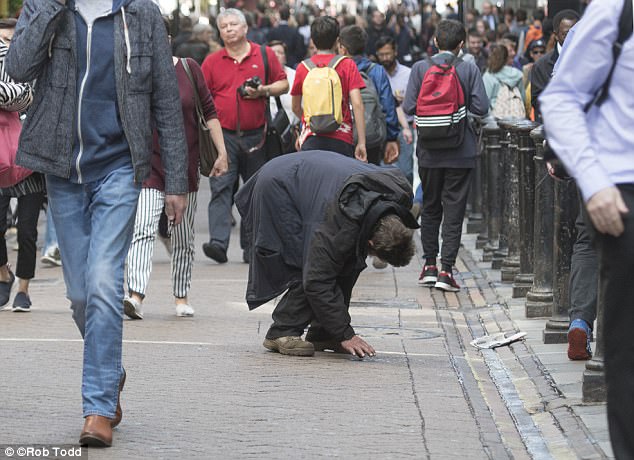 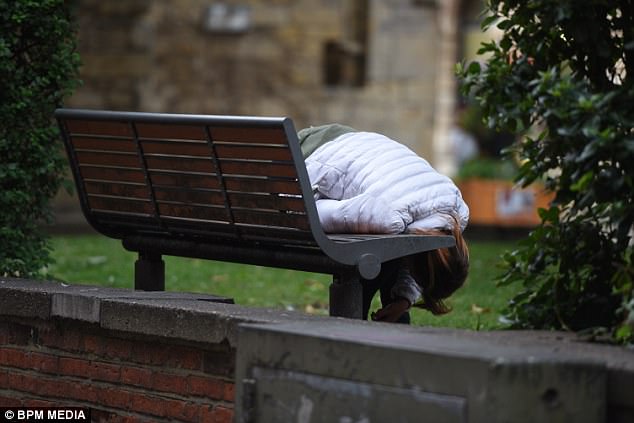 The zombie-like effects are believed to last for ten to 30 minutes before users regain lucidity.

They can then fall back into a stupor within minutes. Other side-effects such as paranoia and dizziness can last for up to eight hours. In Charing Cross, central London, tourists looked on in horror as a man on Spice stood in one spot for ten minutes while doubled over. He then walked 50 yards before freezing again and could not respond coherently to offers of help.

In Birmingham, users Leon and Ray rolled the drug with tobacco into joints. Within moments, Leon could do no more than stare glassy-eyed into the middle distance.

Leanne, who is homeless, said she became hooked after accepting a cigarette. Unknown to her, it had been dipped in the drug.

‘It made me black out and I don’t remember much,’ she said. ‘But that is why I still take it – because it helps me forget.

‘Now I can’t get off it. I’m not normal unless I take it because I’m so addicted, I have the shakes, I start sweating and throwing up, but as soon as I have a drag I’m fine.’

Experts claim Spice is sold to the homeless, addicts and those with mental health issues because they are less likely to be scared of the dangerous side-effects. It comes in up to 100 chemical variations, making the effects of each batch completely unpredictable.

Dr Janos Baombe, 41, a consultant in emergency medicine at Manchester Royal Infirmary, treats up to five people a week who become seriously ill after using the drug. But he sees many more incapacitated around the city centre. He said: ‘I have never seen drugs this dangerous or this powerful.

‘Within days you can become tolerant and need to take more.

‘The withdrawal symptoms are similar to somebody coming off heroin, but Spice users become hooked much more quickly.’

Spice has begun blighting smaller towns, including Torquay in Devon. Business owners in the Castle Circus area claim up to six ambulances are called every day. Catherine Livingston, 46, who owns the Castle Pub, said: ‘People are like zombies, passing out near the road.’

Kevin Foster, the local Tory MP, said: ‘It’s only a matter of time before we have a death.’