A surgeon accused of ‘deliberately deceiving’ a woman into having sex without a condom was cleared of rape yesterday.

Matthew Sewell wept as a judge told jurors to find him not guilty after ‘a number of serious concerning issues’ in the case came to light.

Solicitors for the 40-year-old hospital consultant said they were considering taking out a private prosecution against the woman ‘for perverting the course of justice’.

The case was thrown out after defence barrister Tania Griffiths QC argued that there was no case to answer.

Miss Griffiths said the woman, who cannot be named for legal reasons, had embellished her account to police and lied in her statement. Teesside Crown Court was told that she denied she had been in a sexual relationship with anyone else at the time the incident was said to have taken place.

But she later admitted under cross-examination that she had exchanged WhatsApp messages with a friend that showed otherwise.

It also emerged that the complainant had admitted in a police interview that she embellished her account of the first time she slept with Mr Sewell.

The spinal deformity surgeon met the complainant, who was in her early twenties at the time, on Tinder in December 2016.

His profile on the dating app claimed he was 27, although in fact he was then 36. 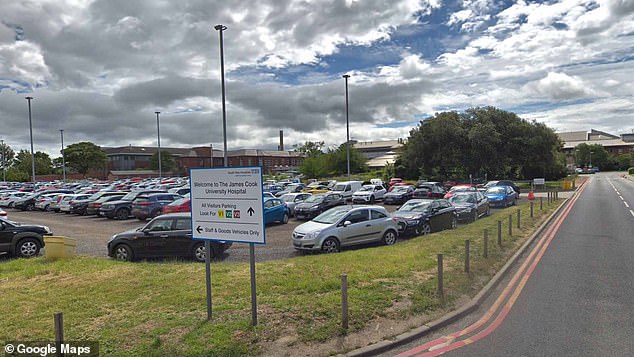 Mr Sewell, who worked at the James Cook University Hospital (pictured) in Middlesbrough at the time, was said to have ‘pleaded’ with her not to report him

The woman, who has since qualified as a doctor, had claimed that Mr Sewell, from south-west London, pretended to put on a condom before they had sex. But she said she later discovered ‘no attempt had been made’ by him to use the contraceptive.

When she confronted the consultant, he asked her: ‘Are you angry with me?’

Paul Abrahams, prosecuting, had earlier told the court: ‘She described that she would have been happy to have sex if the condom was put on, as previously they had unprotected sex… which she was upset about.’

Mr Sewell, who worked at the James Cook University Hospital in Middlesbrough at the time, was said to have ‘pleaded’ with her not to report him. He resigned following the allegations and has not worked as a doctor since.

Miss Griffiths said: ‘He had the whole world at his feet.

‘He said, ‘On Monday I was saving a child’s life, and on Friday I was in a police cell’.’

Judge Stephen Ashurst said: ‘I have come to the conclusion, having analysed in some detail, I was satisfied that there was not evidence that could prove the charges.

‘Secondly, even if there were evidence, the sheer implausibility of witnesses during the trial were such that no reasonable tribunal could safely convict.

‘The decision has been made after some careful consideration in such a troubling case.’ Mr Sewell’s lawyers said that, in addition to a possible private prosecution, they would report the woman to the General Medical Council.

Sean Grainger, of Watson Woodhouse solicitors in Middlesbrough, said: ‘We are considering a private prosecution of her for perverting the course of justice.

‘Mr Sewell has not been able to work for three years and he has been receiving sickness benefits for the stress brought about by this case.

‘He now has to appear before the General Medical Council to ask for permission to practise again.’