A spiritual guru who charges up to $28,000 for ‘Goddess Embodiment’ training and ‘Awakened Man’ retreats teaching men to be ‘divine masculine warriors’ is the nephew of a woman who was a senior disciple of sinister cult, The Family.

Jonathan Movitz runs One Love Humanity with partner Mary Mikhael, who says she is a ‘revered priestess’ who ‘decided to incarnate into the body and live amongst you’ and heal people who are ‘in pain or afraid’.

Mr Movitz claims to have ‘co-created the union of the Threefold Sacred Flame onto the planet’ and committed his ‘lifetime to the evolution of planetary love, to serve Source and the Divine Plan’.

His aunt Joy Movitz, who later took the name Joy Travellyn, was once The Family’s bookkeeper and high-ranking member of cult leader Anne Hamilton-Byrne’s inner circle.

Hamilton-Byrne, who claimed she was the reincarnation of God, ran The Family for two decades in the 1970s and 1980s.

She took in followers’ children at birth, who were then locked away, beaten, brainwashed, starved, their hair bleached, and drugged with LSD and told she was their mother.

Jonathan Movitz and Mary Mikhael (above) run a ‘movement’ called One Love Humanity which charges up to $28,000 for retreats and ‘soul mentoring’ 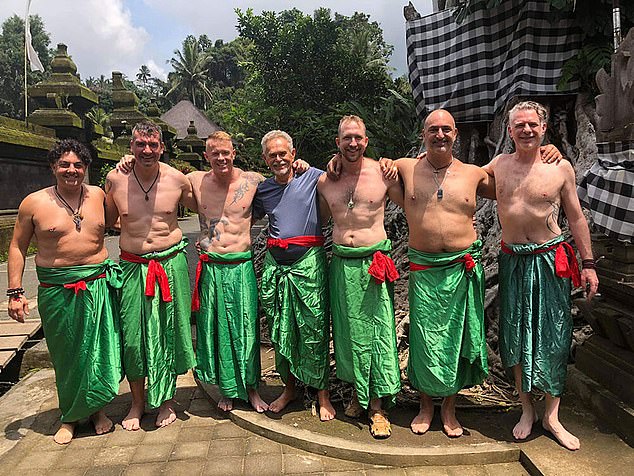 For $5378, not including accommodation, meals or flights, you can attend an ‘Awakened Man’ retreat in Bali and learn to be be a ‘divine masculine warrior’ and an ‘illumed master’ 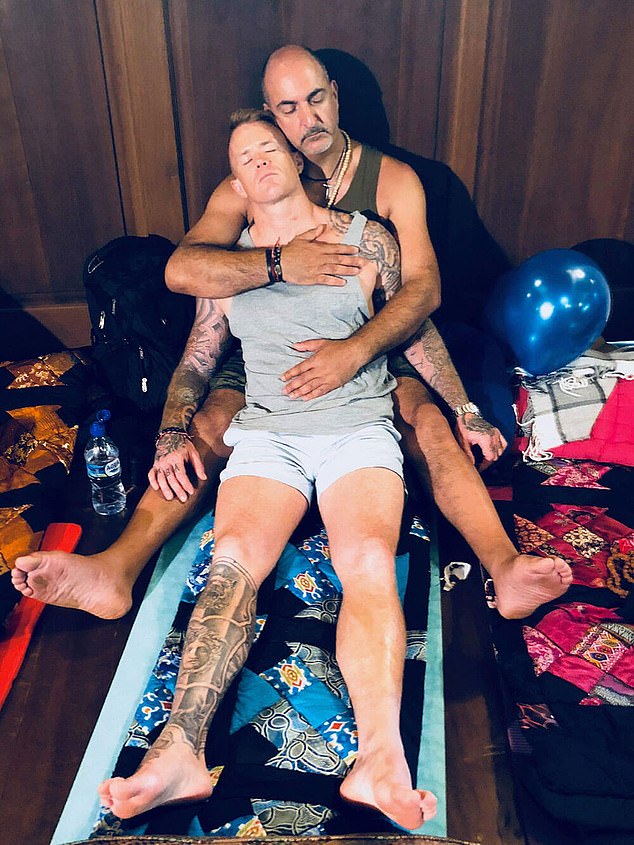 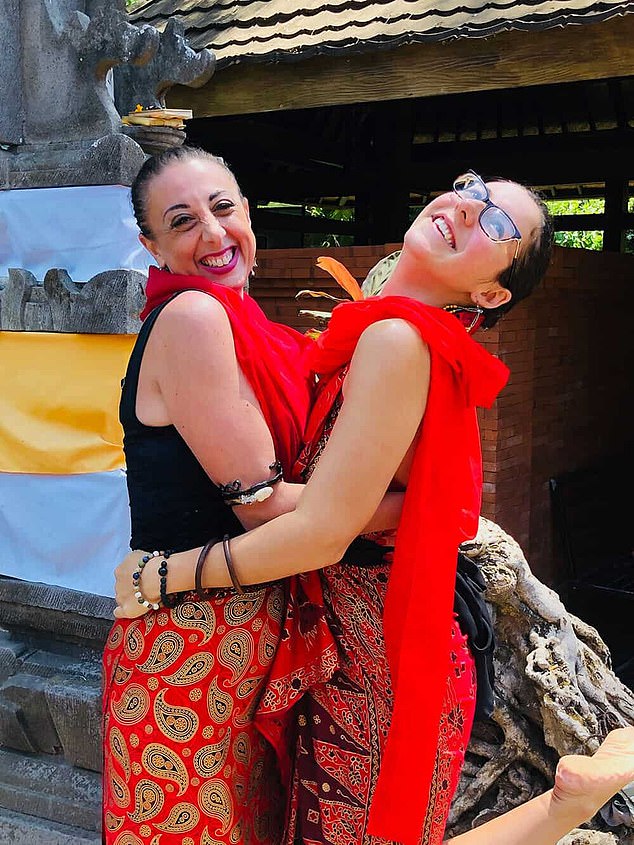 Joy Travellyn was one of eight women devotees convicted in the Victorian County Court in 1988 on charges of imposition and defrauding the Commonwealth after falsely obtaining social security benefits totalling $223,000.

Travellyn was sentenced to five months prison for fraud worth more than $38,000, which was reduced to three months on appeal but she was released on a good behaviour bond.

It was under Hamilton-Byrne’s instruction that Travellyn’s then 13-year-old son had his first LSD treatment.

Hamilton-Byrne, who died aged 98 in 2019, bought sports cars, property around the world and had plastic surgery on cult funds and property taken from members.

The children in the cult were given new names, dressed in matching clothing like a bizarre version of the Von Trapp family, and their hair peroxided to make them look like siblings. 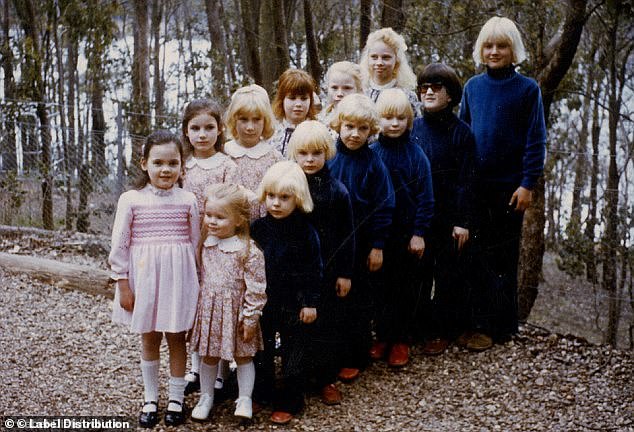 The Family cult’s children were taken at birth, locked away, beaten, brainwashed, their hair bleached, starved and drugged with LSD under the direction of leader Anne Hamilton-Byrne

Cult leader Anne Hamilton-Byrne (above left) fed children LSD, claimed she was God reincarnated and had an inner circle of eight females, including Joy Movitz (above right) 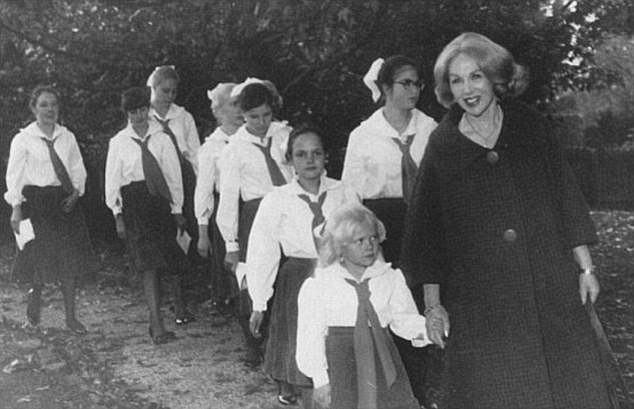 Hamilton-Byrne, who died in 2019, insisted kids be drugged with LSD when they became teenagers and controlled every part of her disciples’ lives, claiming this freed them from the ‘need to return to the earth plane’.

Hamilton-Byrne was raising a master race of children who believed she was their real mother.

Joy Movitz’s biological son, Ben Shenton, who wrote a book about his childhood in the cult, Life Behind the Wire, said his mother had fallen prey to Hamilton-Byrne after suffering a spinal injury.

Hamilton-Byrne told Joy, ‘I will heal you if you follow me’ and within weeks Joy was out of bed and ‘absolutely hooked’, Mr Shenton said.

An accomplished cellist and the wife of a wealthy businessman, Joy Movitz became estranged from her family and went to live in the UK after The Family fell into disgrace and scattered across the globe.

Her brother Ivan Movitz and sister-in-law Lillian Movitz, who are Jonathan Movitz’s parents, were respected members of Melbourne’s Jewish community, as were Joy’s in-laws who, as The Family scandal unravelled, asked their surname not be revealed.

Jonathan Movitz (in pharaoh outfit) and Mary Mikhail (second right) with attendees on a retreat where for $5000-plus, people are promised enlightenment and  ‘wound healing’ 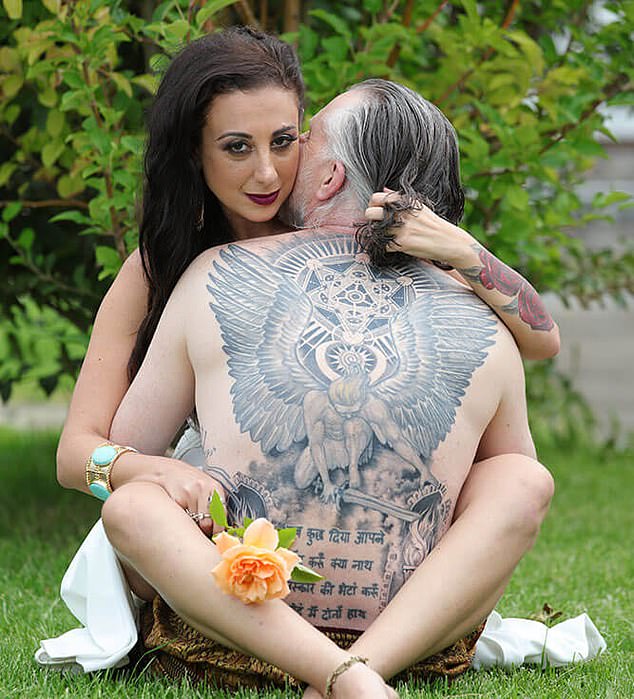 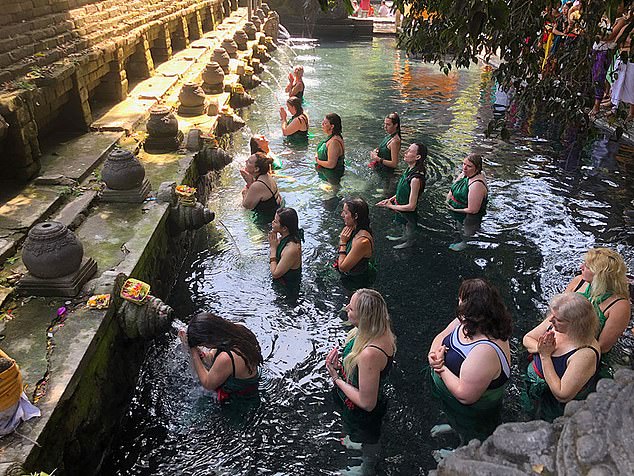 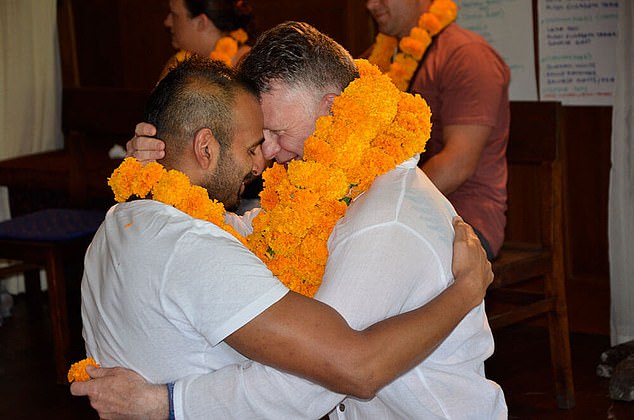 Man Love is taught by Jonathan Movitz (right) at training sessions which can cost clients up to $28,000 if they wish to engage in six months of ‘soul fire mentoring’

Jonathan Movitz, an entrepreneur, has helped ‘transform management effectiveness’ for clients such as Telstra, Optus, Canon and banks including Westpac and NAB, according to his Institute of Conscious Leadership website.

On their One Love Humanity (OLH) site, Mr Movitz and Ms Mikhael are currently advertising spots for six or eight-day Bali, Thailand and Queensland ‘Divine Goddess’ and ‘Man Love’ retreats and workshops in 2022.

With all their prices listed online in US dollars, for ‘$3900’ – which equals $5378-a-head – you can become an ‘Empath Warrior’ and learn ‘Shamanic Alchemy’, or learn ‘sacred marriage rituals’.

According to OLH’s terms and conditions, ‘the cost of the retreat does NOT include airfares, accommodation, meals and excursion costs. These are entirely your responsibility to arrange.’

A mentoring program with Mary and Jonathan costs $8136, and the VIP program at around $28,000 includes six months of ‘soul fire mentoring’, learning ‘Temple Mysteries’ or about ‘inner child wounding’, depending on your gender.

For $2590, women could ‘unapologetically dance to the beat of their own drum’ and explore feminine principles of ‘womb medicine’ along with masculine foundations of ‘seed consciousness’. 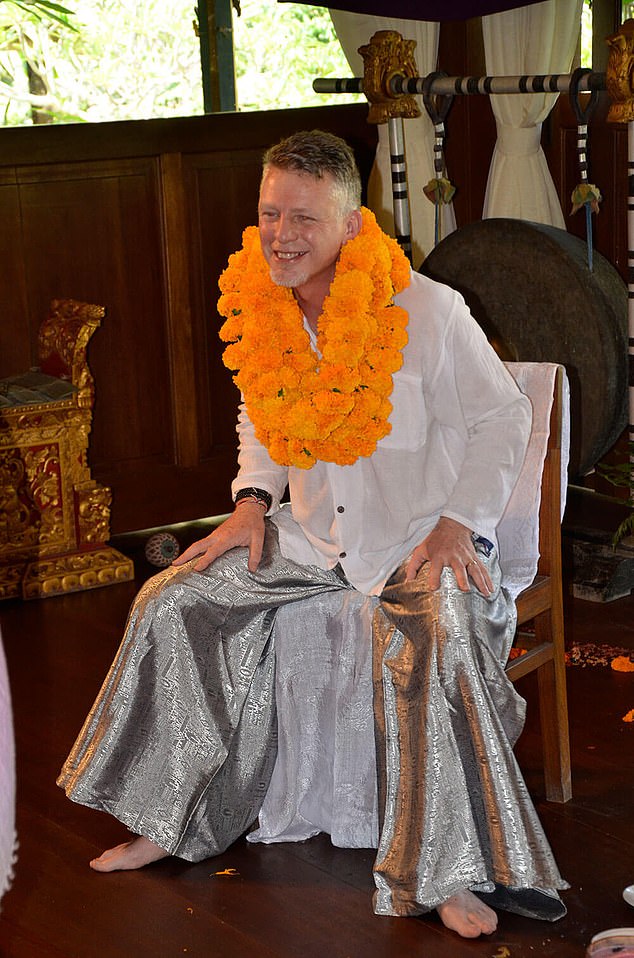 Jontahan Movitz (above), whose aim it is to ‘co-create the union of the Threefold Sacred Flame onto the planet’  sits at the head of a class where he can lecture on anything from healing ‘brother wounds’ to ‘divine masculinity’ 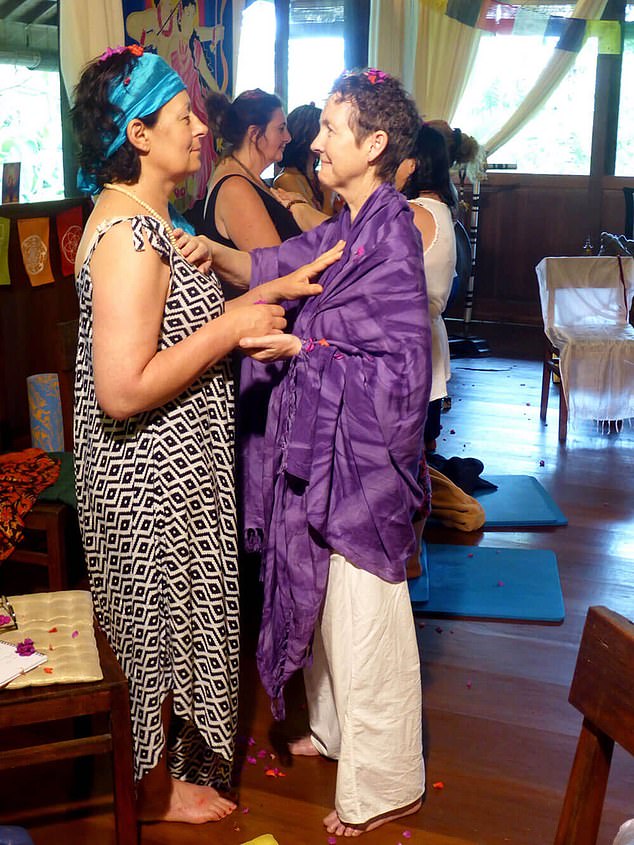 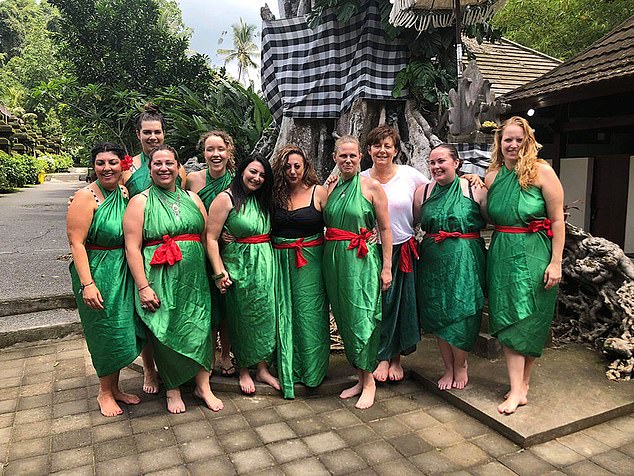 Women on a Goddess Embodiment retreat in Bali (above) could pay more than $5000 to learn alchemy from Mary (black top, centre) , and become ‘ambassadors for a global revolution’

Ms Mikhael, 41, who is an Egyptian-born Coptic Christian, is a self-described ‘soul-spirit visionary’ who is sharing ‘the ancient teachings of the Rose Lineage’.

She reveals on the couple’s YouTube channel ‘why I decided to incarnate into the body and live here among you’ and said she is ‘dreaming the ripple’ with meditations to help end slavery.

‘One of the purposes of every soul of my cell ingrained in my blood is … I have come here to fulfil a mission to be a prophecy of the divine sacred marriage,’ she says.

On the Goddess Embodiment retreat, described as ‘immersion as a signpost on your intimate travels’, participants held hands in a circle and cried, laughed and hugged. 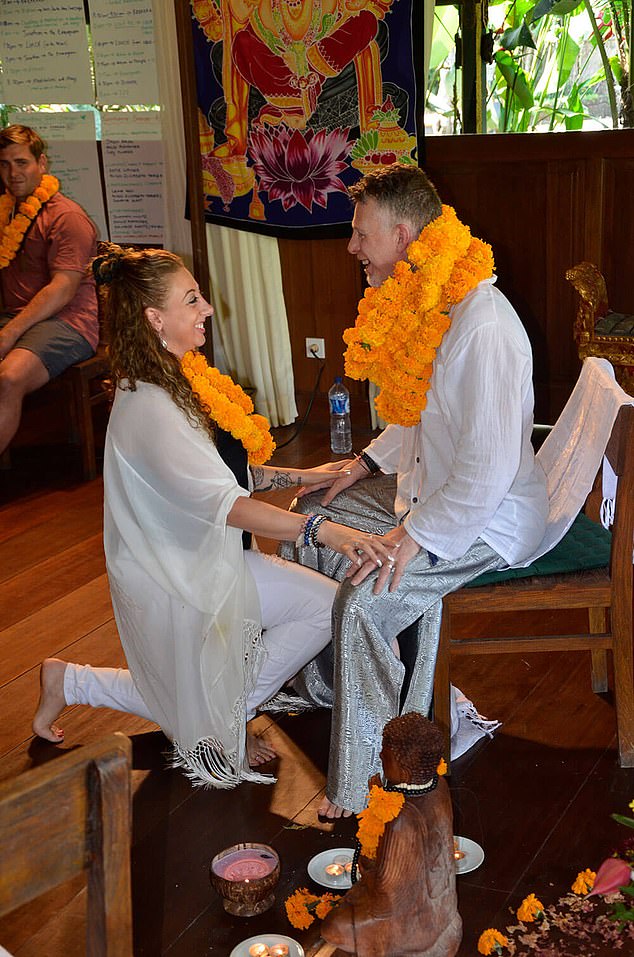 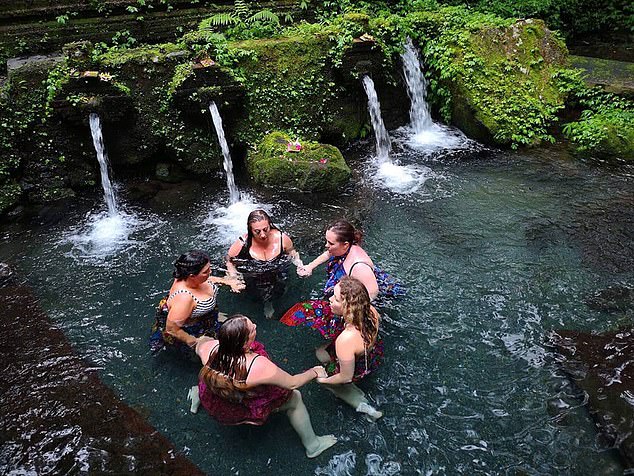 The ‘revered priestess’ Mary Mikhail (top, centre) and four women in a pool on a ‘Priestess Initiation’ workshop which has tickets available in 2022 at $5000-plus, bed and board not included

Awakened Man training (above left), Goddess embodiment and sacred marriage classes (above right) are offered on a $28,000 VIP package which includes ‘ancient teachings lost in time’

They also danced with veils, were led blindfolded into a swimming pool, tickled one another with feathers, and made visits to a temple dressed in green satin robes tied with red sashes.

The men wore similarly-coloured outfits on the ‘Awakened Man’ retreat, which the OLH site warns ‘is not for all men’.

It says the retreat is ‘for men who hear the calling of their soul, the desire to uplift and heal the past consciousness of the masculine and birth the Divine Masculine onto the planet’.

‘To become the Spiritual Warrior … in service to God. It is for men who wish … to become the illumined Master,’ the retreat notes say. 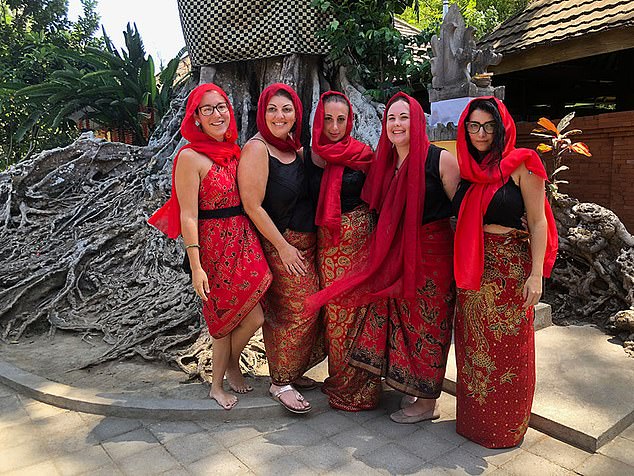 Mary Mikhail (centre, with goddess trainees) is a self-described ‘soul-spirit visionary’ who is sharing ‘the ancient teachings of the Rose Lineage’ 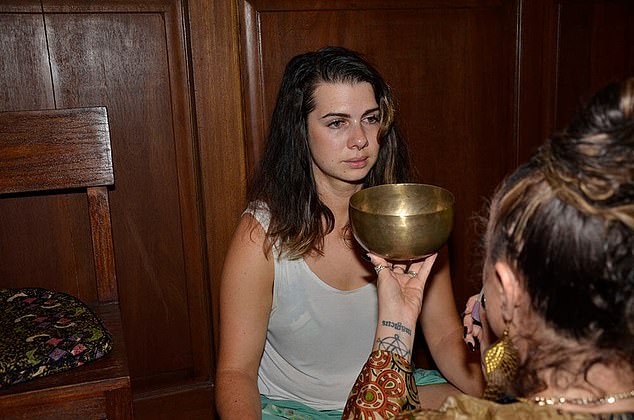 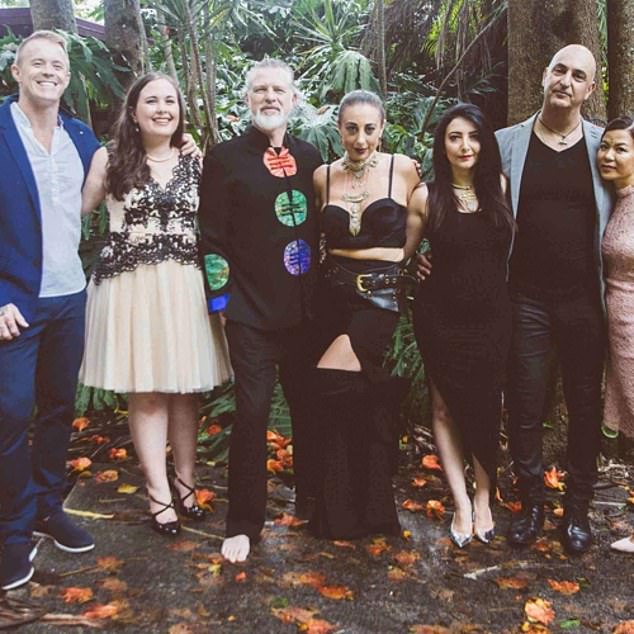 ‘To move into sacred union with the Divine Feminine and birth Sacred Relationships onto the planet.’

Participants will be given an opportunity to heal ‘father and mother wound, first feminine wound, inner child wounding and brother wounds’.

In images from retreats and workshops, Jonathan Movitz can be seen sitting on a red velvet throne, regaling participants, and sometimes wearing an Egyptian pharaoh outfit.

This year the couple held an online ‘rebirth awakening summit’.

Speakers Lee and Sherry Patterson, who are ‘life, relationship and spiritual coaches to celebrities, public figures, musicians and actors’ in the US described the summit as ‘the birthing of an opportunity to bring all these gorgeous people together’.

In a YouTube interview between the Pattersons and Ms Movitz and Ms Mikhail, Mr Patterson said the OLH mission was about ‘connection’.

‘Connection creates the healing,’ Mr Patterson said, ‘the other day someone said “you guys are a cult!” and I said “we’re … connection. we’re a different ‘C’ word!”.’ 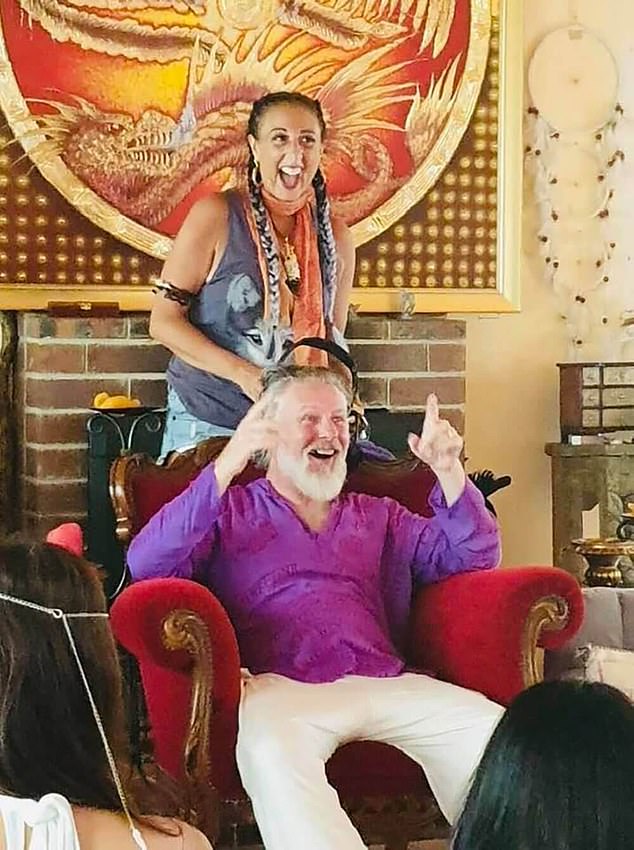 Jonathan Movitz, above on his red throne with Mary Mikhael behind him, regales participants with his insights which he says will bring the rise of consciousness  of divine masculinity and femininity 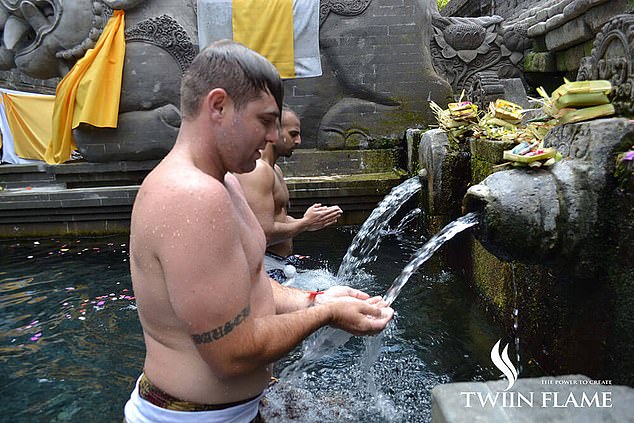 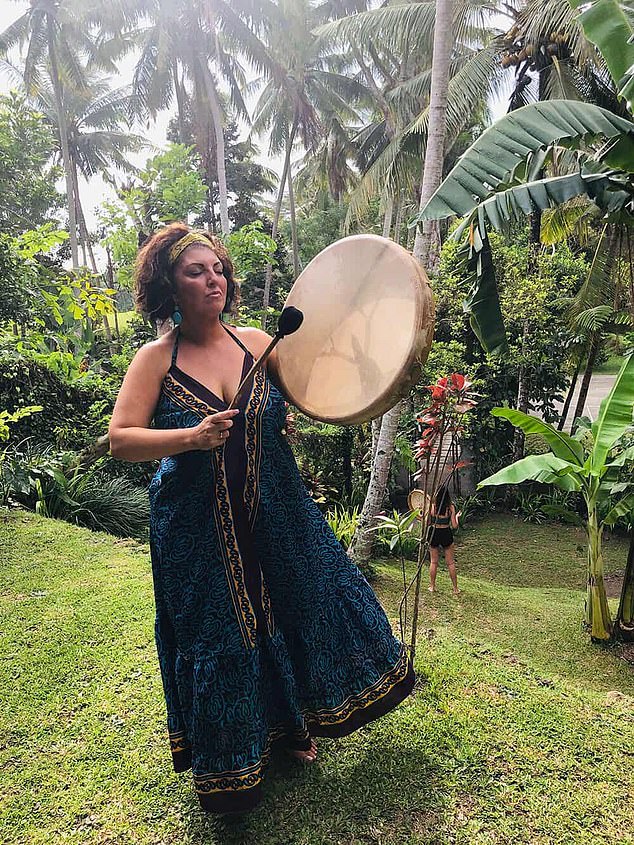 On One Love Humanity’s ‘Magic Woman Ceremonial Immersion’ , women can ‘unapologetically dance to the beat of their own drum’ and explore feminine principles of ‘womb medicine’ along with masculine foundations of ‘seed consciousness’ 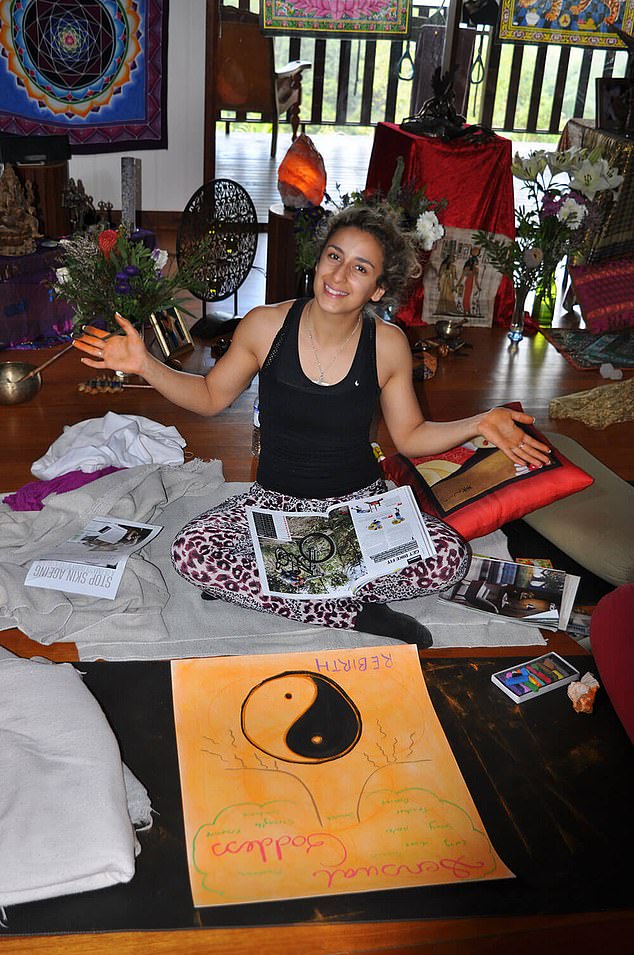 The OLH’s motto on its website says, ‘We are at a sacred time in our evolution; a time of birthing a higher state of consciousness for ourselves and our beautiful planet’.

Asked by Daily Mail Australia if One Love Humanity was a cult, Ms Mikhael said ‘we’re not a cult. We don’t have followers’.

‘We don’t want to have anything to do with The Family,’ she said.

Ms Mikhail said the couple had been doing ‘a lot of free work during the Covid period. It’s about supporting people, then empowering people … to be a beacon.’

Joy Movitz Travellyn was one of eight women members of The Family who were Anne Hamilton-Byrnes right-hand women and were known as ‘aunties’ to the children.

In 1984, the Supreme Court of Victoria heard that Travellyn ‘had done all the talking’ in a property sale of a sect member who may have been subjected to ‘undue influence’ to sign over house proceeds ten days before she died. 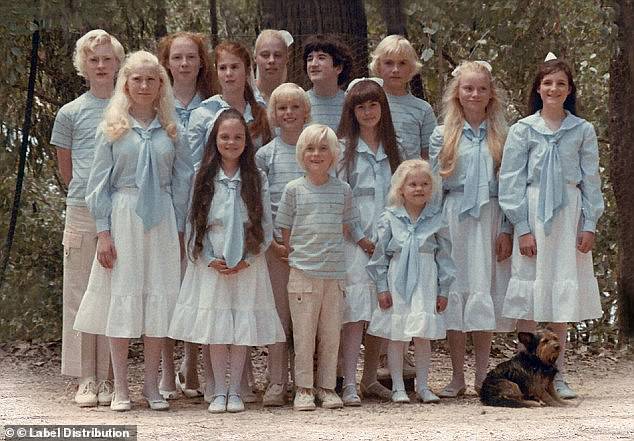 Child members of The Family Cult (above) had their names changed, their hair bleached, and were locked in and starved with Ben Shenton (centre row, third left) only finding out later that his real mother was Joy Trevallyn 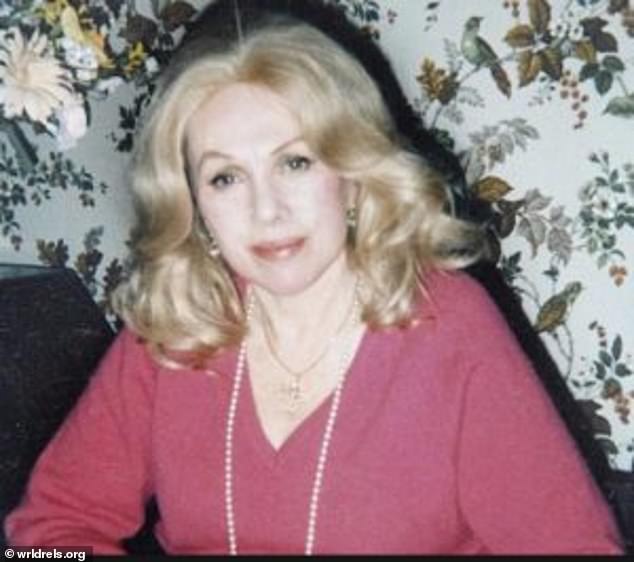 Anne Hamilton-Byrne went into exile after the scandalous truth about her cult The Family was revealed but returned to Australia and died, demented and aged 98, in 2019

The Family operated from two compounds in the 1970s and 1980s, in the Dandenong Ranges on Melbourne’s outskirts and at Lake Eildon, Victoria.

Anne Hamilton-Byrne controlled all parts of her disciples’ lives, claiming this freed them from the ‘need to return to the earth plane’.

Devotees were against reincarnation and used mind-expanding LSD as a ‘clearing out’ of the past.

The clearings were to ‘take members into the past and to view (Hamilton-Byrne) on a higher spiritual plane’.

Members believed they had previously lived as Beethoven, John the Baptist, Mozart and Pontius Pilate.

Hamilton-Byrne went into self-appointed exile in 1986, and it is believed the sect thereafter managed its money in Swiss bank accounts.