Sports Illustrated Swim Search finalists are more diverse than ever

The latest casting lineup for the Sports Illustrated Swimsuit Issue may be its most diverse ever, including women of all shapes, sizes, ages and backgrounds.

The magazine is using Instagram to share the 17 finalist to make it into their #SISwimSearch this year, and the picks unveiled so far include plus-size models, women proudly displaying their stretch marks and cellulite, and even a 55-year-old rocking a string bikini.

Also in the group is Miss Universe runner-up Ariadna Gutierrez, a 37-year-old US Army veteran, and a dancer who suffers from alopecia and is completely bald.

Dancer: Christie Valdiserri, pictured, is one of 17 finalists in the Sports Illustrated Swimsuit Issue’s Swim Search this year 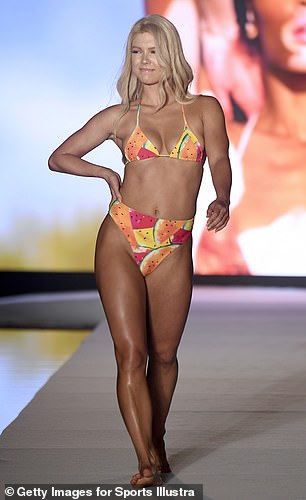 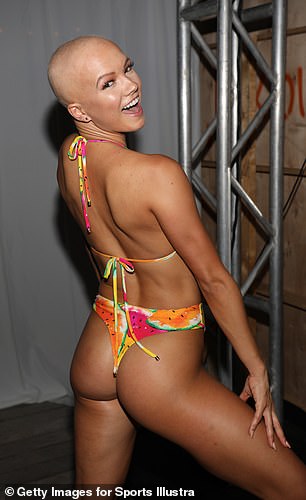 Christine walked the runway at 2019 Sports Illustrated Swimsuit Runway Show During Miami Swim Week in July, taking off her wig on the catwalk

Appearing in the magazine’s Swimsuit Issue has launched the careers of countless models, from Kate Upton and Chrissy Teigen to Ashley Graham – and now there are 17 hopefuls vying to step into their string bikinis.

The women were chosen after the magazine’s annual Miami Swim Week runway show in June, which was considered the publication’s most diverse ever.

The runway also brought together a lineup of women who stand for important issues, such as wearing socially conscious swimwear, too.

In images posted to Instagram, the women had the opportunity to reveal a little more about themselves.

Fitness instructor and dancer Christie Valdiserri⁣⁣⁣, who has documented her journey with alopecia, poses proudly in a tiny black bikini, her bald head a first for the magazine. 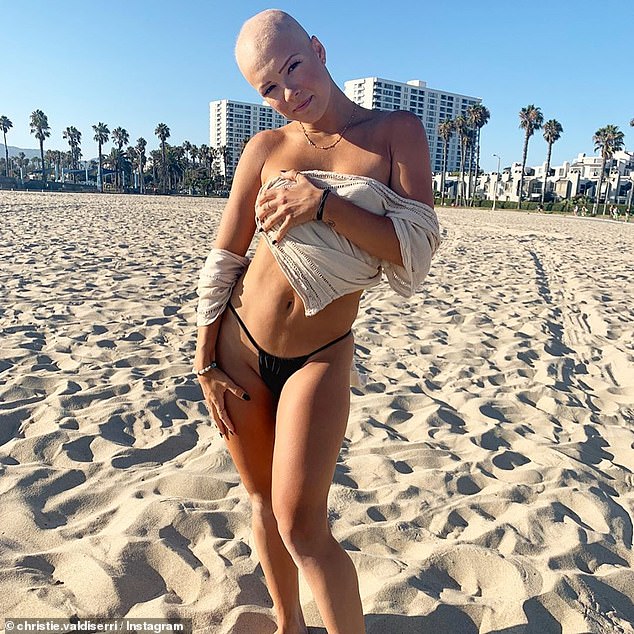 ‘Associating hair with beauty was taught to us. We weren’t born believing hair makes you pretty, but society has lead us to believe that,’ she said

She said she was inspired to ‘educate the next generation that beauty comes from who you are, not from what you look like.’

‘Associating hair with beauty was taught to us. We weren’t born believing hair makes you pretty, but society has lead us to believe that. So I plan to let my personality and my positive nature shine through regardless of if I ever have hair on my head again,’ she told Sports Illustrated.

‘I want to show the confidence that I’ve worked so hard for and my love for life to radiate through my posts and through my presence everyday, so young girls or other women who are losing their hair or have been hiding under a wig for years have at least a small glimpse of hope.

‘I want to give people the little push they need to go from being bald to being bold,’ she added. 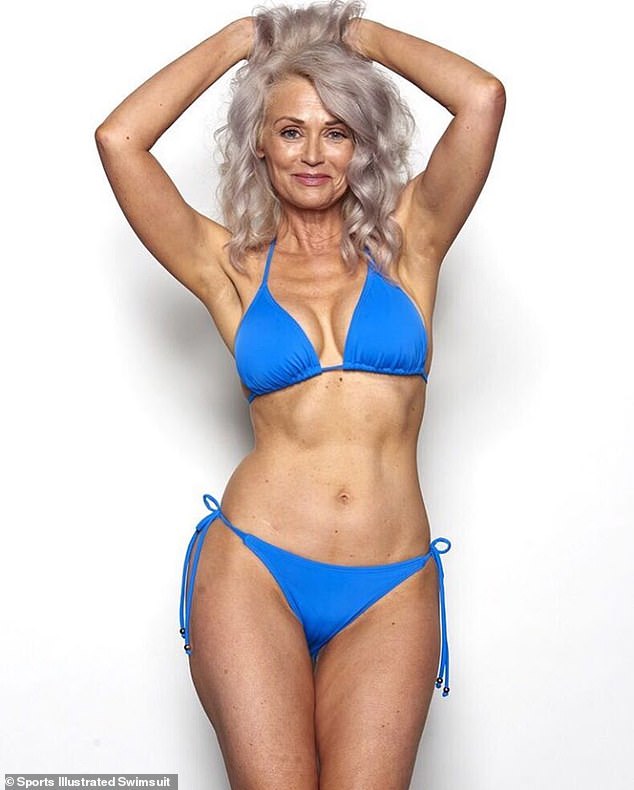 Fifty and fab: Kathy Jacob, pictured, wants to prove that women in their fifth decade are still relevant, amazing and sexy 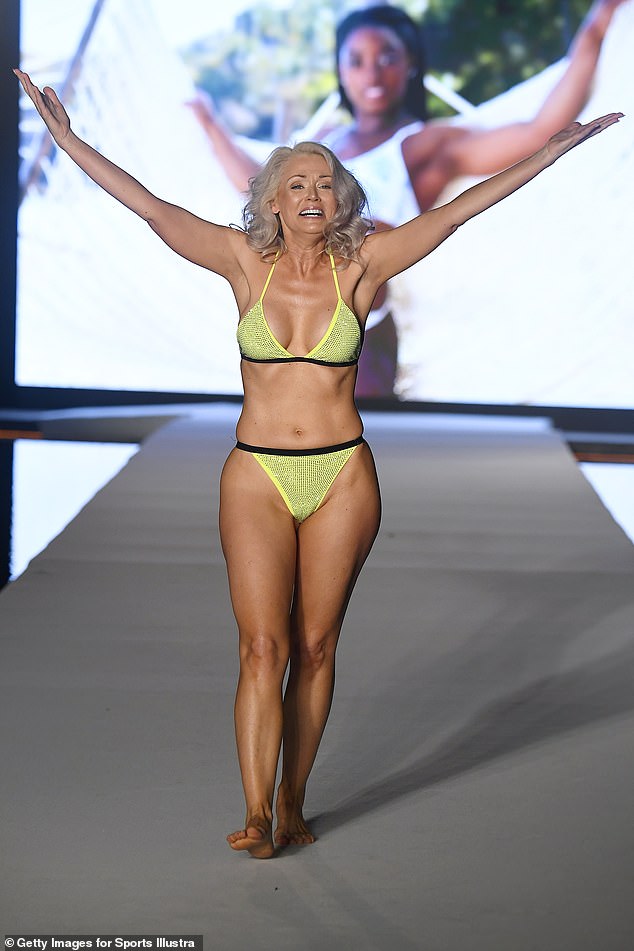 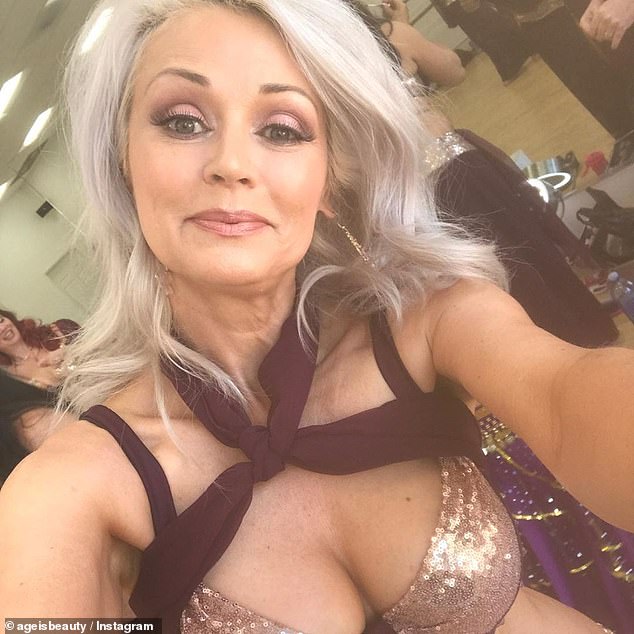 Kathy Jacob, 55, is the oldest woman to ever walk the runway for Sports Illustrated, and is certainly one the oldest models to pose for the magazine.

The longtime model and actress said she was taking part in the search in a bid to ‘change’ the views on how women over 50 should look and act.

She also added that ageism ‘impacts all of us’ but she wants that to stop once and for all.

‘I am doing this to be part of a change in the views on women over 50, not only by society, but by ourselves. It is a boomerang effect, and we as women over 50 need to stand together and realize how amazing, relevant, beautiful and sexy we all are. It’s time women of all ages unite and claim our power,’ Kathy said.

Kathy certainly isn’t shy about posing in swimwear or lingerie, and has modeled both before — including in shots with her 22-year-old daughter, Abigail Rose.

The two even starred together in a Third Love underwear campaign earlier this year. 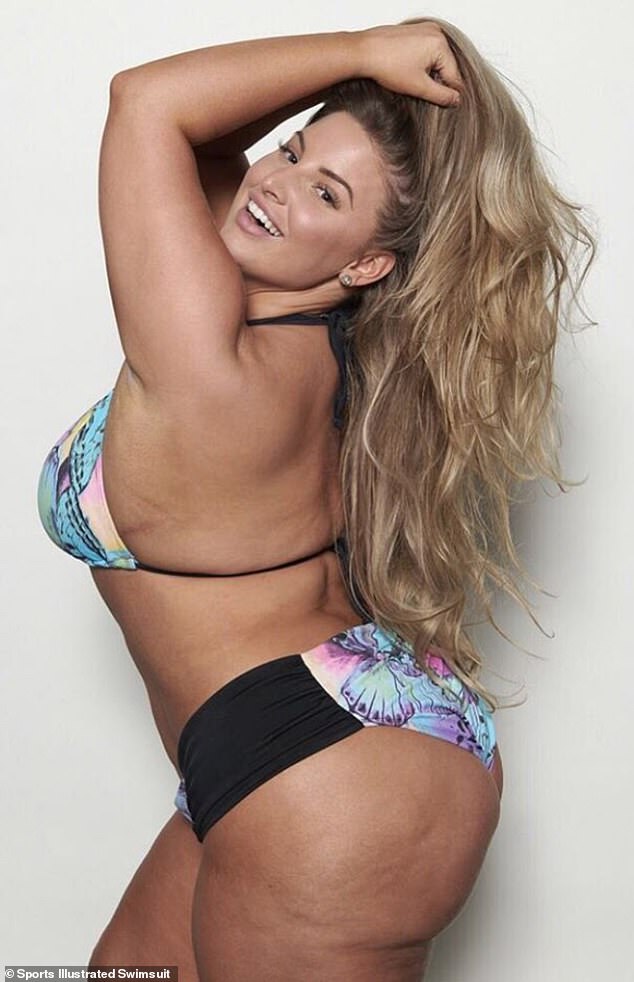 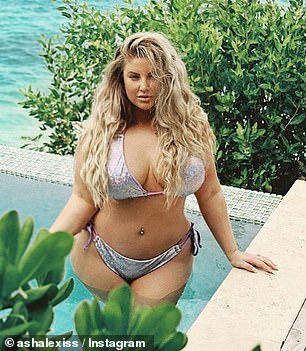 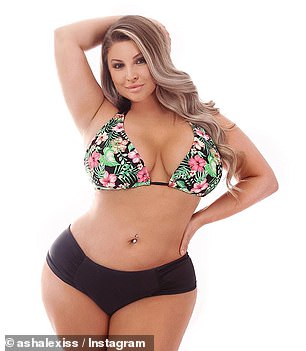 Advocate: The stunning Boston model, who is an advocate for body positivity, said she’s been ‘curvy her entire life’ and has dealt with endless amounts of bullying 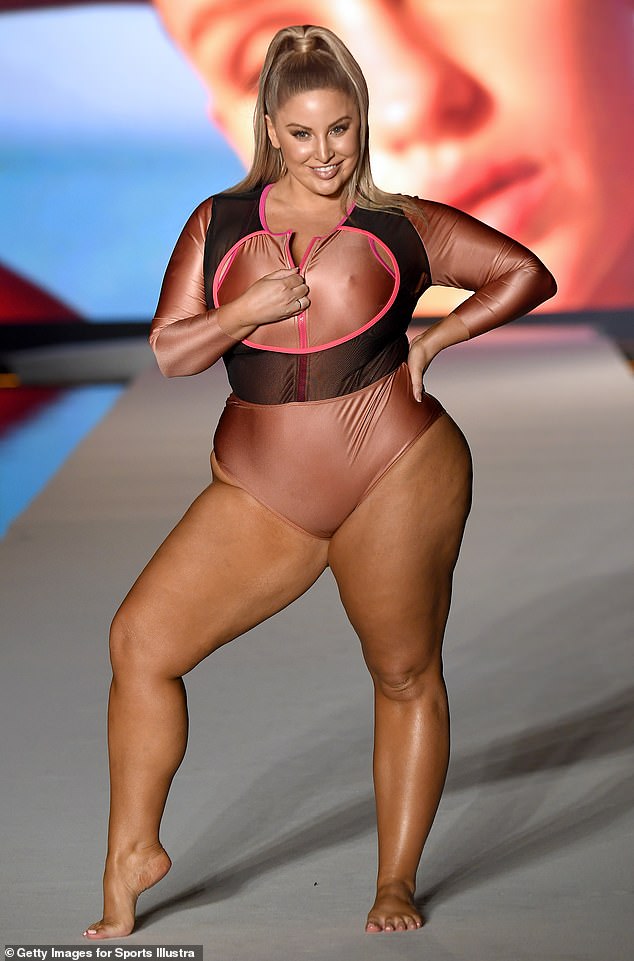 Workin’ it! Ashley is pictured walking the runway at Miami Swim Week in July

Ashley Alexiss, 28, is no stranger to the limelight, with 1.2 million followers on Instagram and her own plus-size swimwear brand, ShopAlexiss.

The stunning Boston model, who is an advocate for body positivity, said she’s been ‘curvy her entire life’ and has dealt with endless amounts of bullying.

‘Even at my smallest, I still had curves. I remember being bullied almost daily through elementary, middle, and high school, for my body. I’m still attacked for it to this very day,’ she shared.

‘When you truly understand that the beauty that you possess is in your complete control, your mindset changes. I know I’m not everyone’s cup of tea and that’s OK. Accepting that is the biggest challenge,’ she said.

‘I like to share with people who struggle to love the skin they’re in that they only have one life and one body and wasting time hating it isn’t fair to them,’ she added. 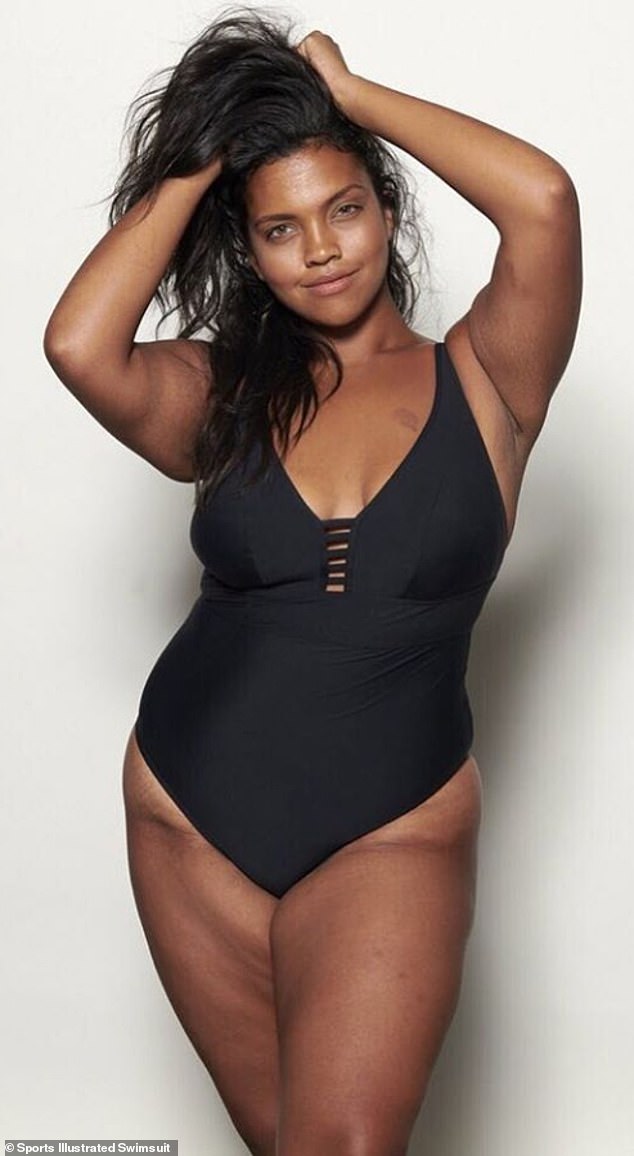 Golden ticket: Florinda Estrada, who is signed to One Models in New York, received Camille Kostek’s ‘golden ticket’ endorsement at the Miami castings 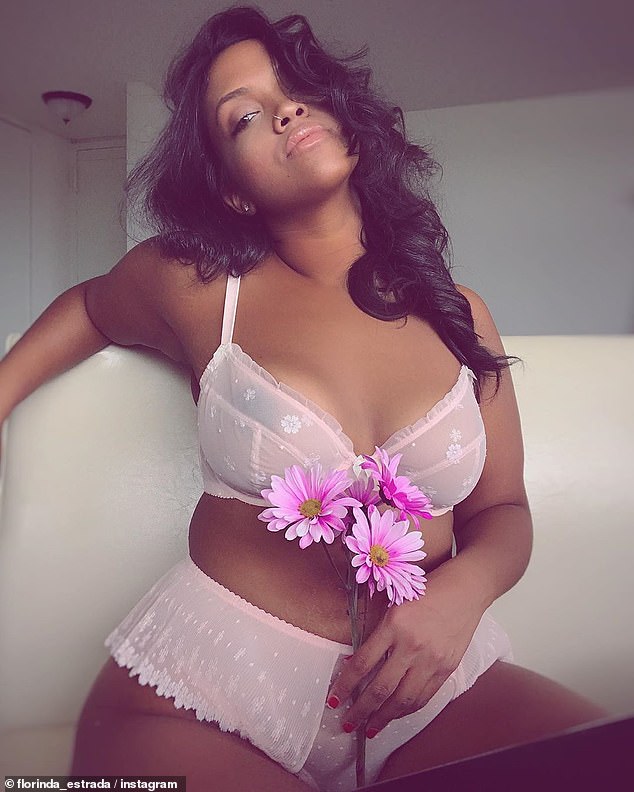 ‘A little hope infused with the belief that I would eventually get my “yes” is what has kept me going this long,’ she said 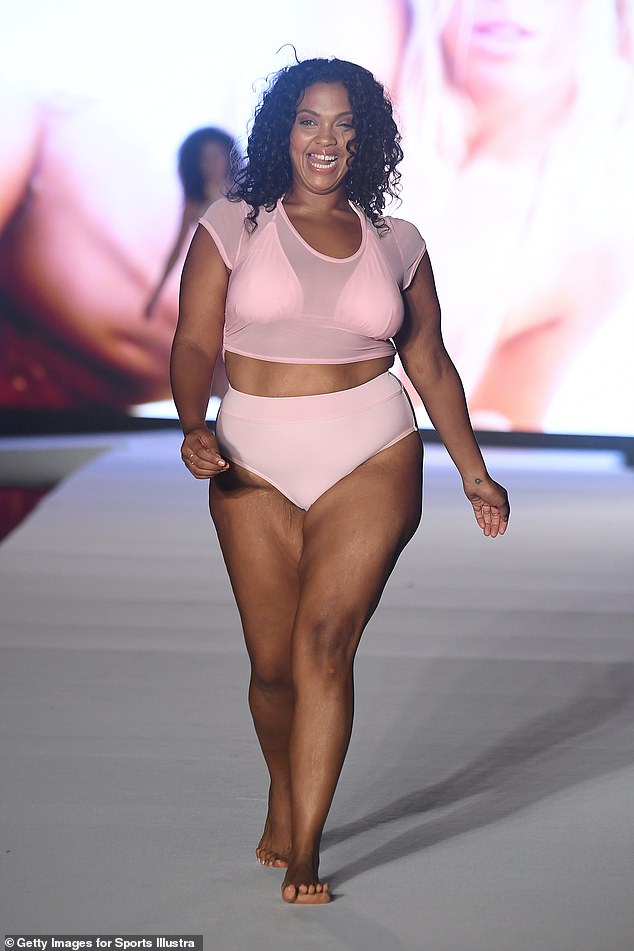 She added: ‘Even if my journey ends at the Sweet 17, I already won’

⁣New York-based model Florinda Estrada posed makeup-free and said that she’s been fueled even though ‘one million people can tell you no.’

‘If you’re passionate about something, decide to give it your all, and just commit to being your self throughout that entire process, if there is a “yes” out there for you, you will get it–even if it takes years and years of trying.’

‘A little hope infused with the belief that I would eventually get my “yes” is what has kept me going this long. And look, I got mine! Even if my journey ends at the Sweet 17, I already won,’ she poignantly shared.

In Miami, Florinda was selected by SI regular Camille Kostek to win a ‘golden ticket’ and skip the line to go straight into castings.

‘It was everything,’ Florinda said of the moment. ‘It made me feel like because Camille–a past winner of SISwimSearch and current SI Swimsuit cover model–saw something in me, I had the responsibility of not letting her down!’ 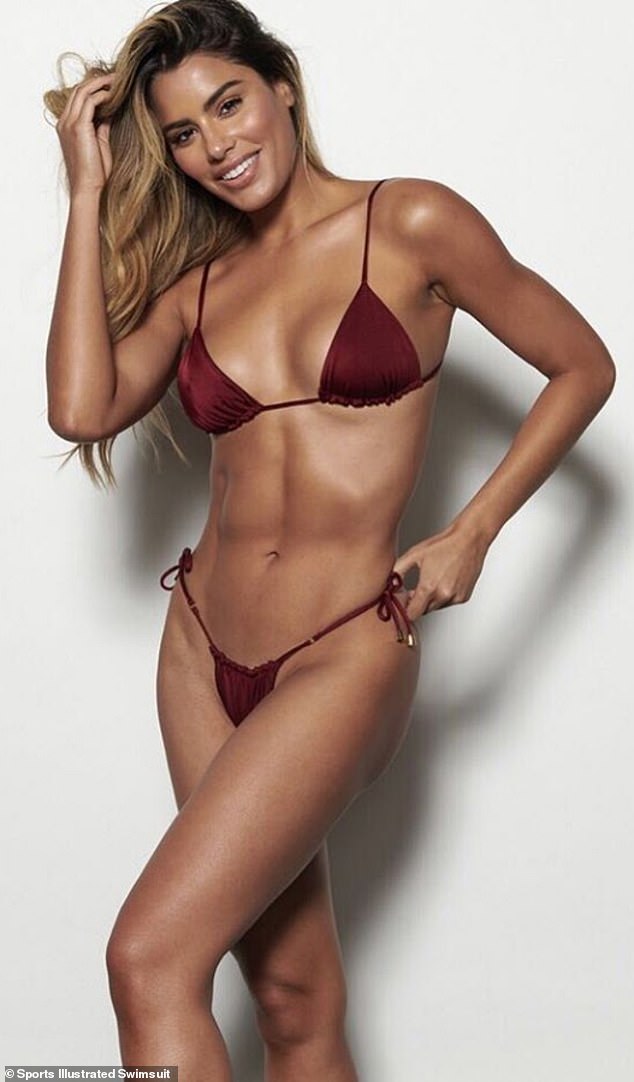 Beauty queen: Ariadna Gutierrez, former Miss Columbia, showed off the results of her dedicated Pilates routine as she was named one of the 17 finalists 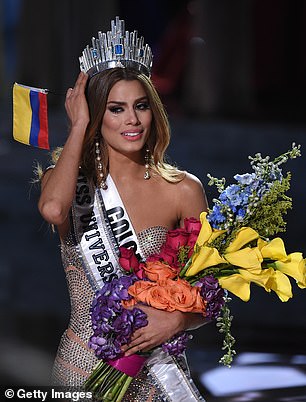 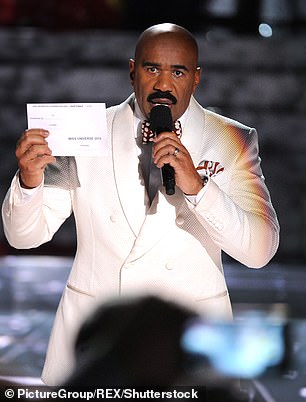 Yikes! Steve Harvey mistakenly announced her as the 2014 Miss Universe winner, when she was actually runner-up 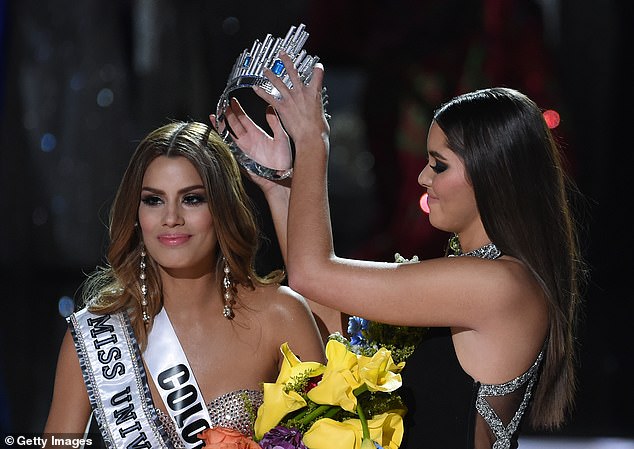 Ouch! The traumatic moment aired all over the world, and over and over on the internet

Swimwear model Ariadna Gutierrez also joins the mix, five years after Steve Harvey mistakenly announced her as the 2014 Miss Universe winner, when she was actually runner-up.

The Latina beauty said the pageant ‘changed her life’ even if the viral moment was ’embarrassing’.

‘I believe that Miss Universe changed my life. It was a moment where I suddenly went from being Miss Colombia to being the wrongly crowned girl at the Miss Universe pageant.

‘At that moment in time, I thought I was living one of the most horrible experiences of my life, personally and professionally. I was representing Colombia, and did not want to disappoint a whole country that was counting on me,’ she said.

‘With this experience, I’ve learned that from the darkness we can create light. Of course, I was sad, depressed, and even embarrassed, but the truth of the matter is even though I went through that, it’s opened so many doors that might not have been opened if that moment didn’t happen.

Finalists: Models Tanaye White, left, and Salina Jade, right, are among the final 17 women vying for a spot in the magazine 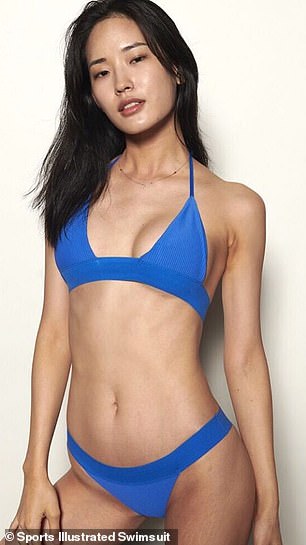 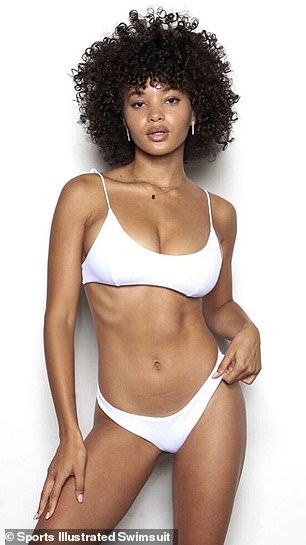 ‘I am very lucky that that moment has brought me here, where I am able to represent not only my country, but the Latin community,’ she concluded.

Ariadna, 25, regularly shows off her Pilates fitness routine on Instagram to her 3.5 million followers.  She previously placed third in the American installment of Celebrity Big Brother and has acted alongside Vin Diesel. 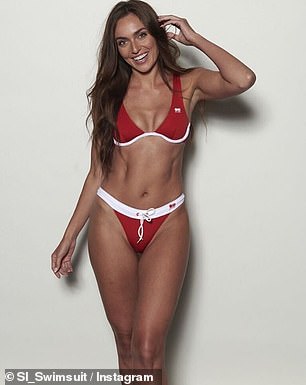 Girl power: US Army veteran Courtney Smits is also one of the finalists

‘Working in a male dominated field has shown me that femininity and hard work are no longer mutually exclusive,’ Courtney said.

‘I was told that at one point in my career, I will be forced to choose between these two worlds that don’t seem to fit together, that I “can’t be a model and be in the Army.”

‘I was told that my male superiors and coworkers wouldn’t take me seriously if I wear make up or “embrace my pretty,” and I was told by modeling agencies that I should quit the Army because “I am too pretty to be shot at.”

‘Being a part of Sports Illustrated means that I can show young girls and women that we CAN have it all!