In the wake of Real Madrid’s third successive Champions League victory, some fans have noticed that their team photo from before the match is eerily familiar.

The photo from their 3-1 win over Liverpool in the Champions League final is almost identical to the one taken a year early, when they beat Juventus in the 2017 final.

Real Madrid lined up with the same starting eleven for both finals, but the players not only positioned themselves in the same order, they also used the same poses and hand positions.

The only thing that differs between years is the colour of the kit, but everything else could be interchangeable.

From Marcelo’s hands on on his team-mates legs, to Luka Modric dipping down slightly lower than the rest, and Cristiano Ronaldo stretching up on his tip-toes.

Real Madrid have shown they are able to replicate their efficiency on and off the pitch, but they are clearly getting used to posing for such photos. 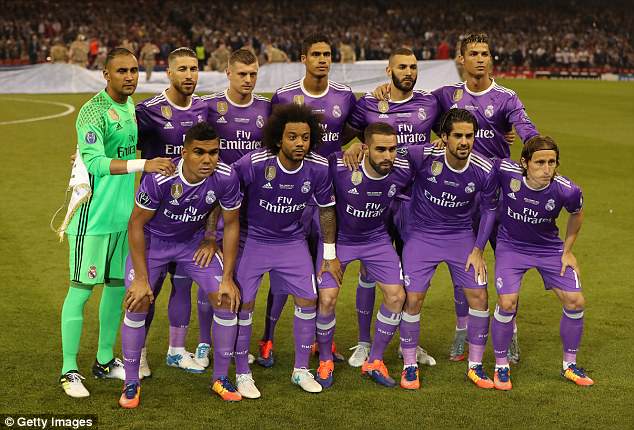 The spot received quite the reaction on social media, with fans labelling the players as ‘robots’ while others suggested ‘if it ain’t broke don’t fix it’.

Whatever Madrid are doing is clearly working as they claimed their fourth Champions League title in five years and a record thirteenth in total.

Madrid will be looking to continue their streak next season, but with uncertainty around some of their players future a third replica photo may be off the cards.

Ronaldo hinted at his departure following the final before later back tracking, while Karim Benzema has come in for a lot of criticism throughout this season.

Toni Kroos could also be subject to a bid to lure him away from the Bernabeu after Thiago Motta urged Paris Saint-Germain to buy the German midfielder.

@JoshMound what’s crazier than the fact every hand is in the same position is that they have played exactly the same starting 11 a year later and still won!

Why change something that’s not broken?

They are robots it’s confirmed.

Marcelo with the same hand placement 😂