Spot the dinosaur! Clue – he’s taking a drink at the Yorkshire wonder of Flamborough Head near Filey

As we gaze out at dozens of gleaming white kittiwakes bobbing and squabbling on the navy waters of the North Sea, my guide, Tim, says: ‘Really it’s a giant speed-dating site for couples who will never, ever split up.’

Looking upwards, I spy half a dozen gannets squatting on a narrow shelf gouged into the cliffs, their stoic demeanour suggesting they might be a little more patient about choosing their life partners.

Higher up the cliffs sits a solitary fulmar, seemingly wondering if turning up on this date night was a wise decision after all.

Clifftop date: Flamborough Head, known as The Drinking Dinosaur, on the Yorkshire coast

All these birds mate for life and Bempton Cliffs, five miles outside the North Yorkshire seaside town of Filey, is where these birds, as well as puffins, guillemots and razorbills, come to find a lifelong match after a long winter abroad.

It’s a spectacular sight — almost as arresting as the dinosaur I spot later during my visit.

I walk along the windswept fringes of this RSPB reserve — equipped with half a dozen lookout points which jut out over the cliff edge — while behind me stands a lonely concrete pillbox, one of the remnants of the long-mothballed RAF Bempton, a crucial radar monitoring base during the Cold War.

Filey, easily visible from these lookout points, is the kind of town that’s so sedate and timeless I almost expect to see a vacationing Princess Mary promenading along The Crescent, the sea-facing street of whitewashed late-Georgian and early-Victorian terraces.

Back in the 1930s, the daughter of George V would take her young sons regularly to this discreet and demure seaside town, originally home to a handful of sea trout and lobster fisherman.

Slowly it has developed as a more middle-class alternative to the nearby coastal resorts of Bridlington and Scarborough.

Meandering through the town’s narrow streets today is to be immersed in a hushed and contented bygone era. The menu at Inghams, where I eat sublime haddock and chips, includes the option of a slice of bread and butter for precisely 20p.

The prosaically named Household Stores looks like the kind of place that would stock a good reamer for a pipe and a sturdy styptic pencil. 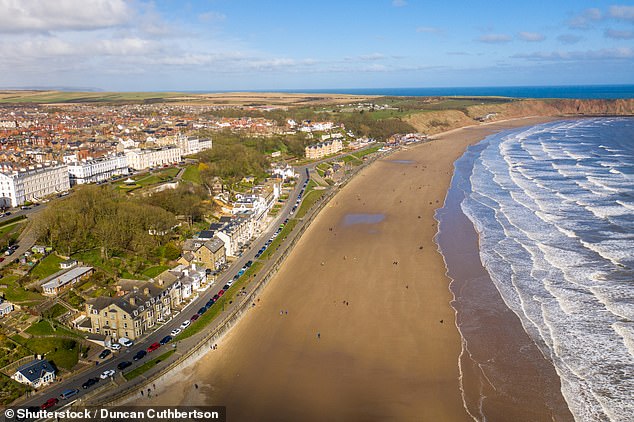 The beach at Filey, where birds such as puffins, guillemots and razorbills come to find a lifelong match after a long winter abroad

The fishmonger H. G. Lovitt closes at 1pm, doesn’t take cards and sells some of the best-value monkfish, salmon, rollmop herring and dressed crab that I’ve ever seen on the UK coastline.

But there’s a welcome sprinkle of modernity if you look hard enough. The Boat Shed is a modish bistro with an immense menu of Yorkshire gins and superior pizzas with creative toppings, such as Camembert and prosciutto.

And at my cute-as-a-button guest house, Seafield, gift bags of local fudge are left on my pillow on arrival, and breakfasts go far beyond the standard fry-up into the territory of eggs royale with dill and avocado.

On my second day, Tim, a Blue Badge guide who has been leading private tours around Yorkshire for five years, takes me to Flamborough Head, also known as The Drinking Dinosaur, due to the shape of the rock formation.

Here stands what might just be Britain’s most handsome lighthouse. The cream-coloured structure dates back to 1806. Climbing to the top of the 119 steps is a challenge, but the view is worth every one.

The waves throw tantrums against the chalk and limestone cliffs while the lighthouse emits four white flashes every 15 seconds, day and night, 365 days a year, as it has done for centuries.

I watch as the late afternoon sun begins to dip, and the steady heartbeat of the beam sheds light on Filey and the deep navy swell of the North Sea beyond.