It’s the go-to music streaming service for millions of people around the world, but news of a subscription price increase has left many Spotify users reeling.

Spotify has confirmed plans to increase the prices of its premium subscriptions in the UK from April 30.

The Premium Student, Premium Duo and Premium Family plans will all increase in price next month, with the biggest price increase affecting the Family tier, jumping from £14.99/month to £16.99/month.

Several frustrated users have taken to Twitter to discuss the price increase this afternoon, with one claiming that Spotify is getting ‘too big for its boots.’

A Spotify spokesperson said the service has 70 million tracks and 2.2 million podcasts, providing listners ‘greater value than ever before.’

‘We offer a variety of subscription plans tailored to our users’ needs, and we occasionally update our prices to reflect local macroeconomic factors and meet market demands while offering an unparalleled service.’

It’s the go-to music streaming service for millions of people around the world, but news of a subscription price increase has left many Spotify users reeling

The subscription price increase was confirmed by Spotify in an email sent out to users this morning.

MailOnline’s Shivali Best received the email about her Premium Duo subscription, which is increasing in price from £12.99/month to £13.99/month.

The email reads: ‘Starting April 30, 2021, we’re increasing the price of Premium Duo so we can continue to bring you new content and features that you can enjoy both as a couple and as individuals.

‘Since you’re already a Premium Duo subscriber, we’re giving you one additional month at the current price.’

It appears the price of the standard Premium subscription (£9.99/month) is not changing. 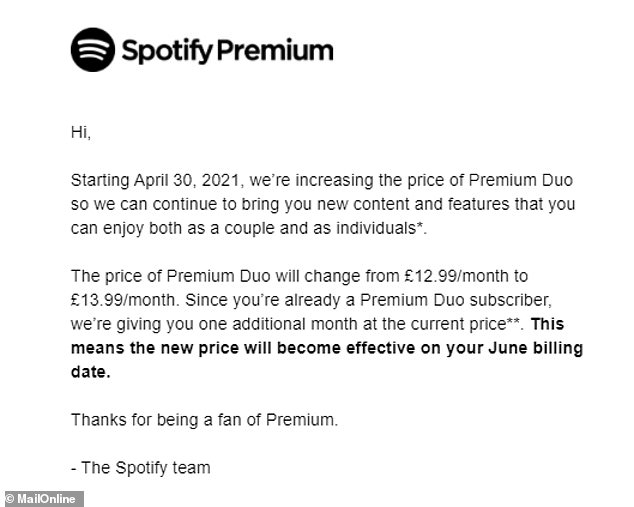 MailOnline’s Shivali Best received the email about her Premium Duo subscription, which is increasing in price from £12.99/month to £13.99/month

MailOnline has contacted Spotify for further information on whether the price changes are in the UK only or will affect users globally, all they confirmed was that they often update local pricing based on ‘macroeconomic factors’.

Unsurprisingly, many loyal users are furious about the news.

One user tweeted: ‘Spotify increasing subscriptions by 20% thats some jump in price and I’d like to know who they think they are.’

Another added: ‘Spotify is getting too big for their boots increasing the premium price for students.’

Meanwhile, another user was quick to point out the convenient timing of the price increase, as Spotify owner Daniel Ek announced plans to bid for Arsenal.

They wrote: ‘My Spotify duo price going up while they’re preparing a bid for a certain North London club. Could it be?!’

Unsurprisingly, many loyal users are furious about the news, taking to Twitter to discuss Spotify’s subscription price increase

The price increase also appears to have steered some users towards rival apps, including Apple Music.

Spotify’s price change means that most of Apple Music’s subscription plans are now cheaper, with the Student plan priced at £4.99/month, the individual plan at £9.99/month, and the family plan at £14.99/month.

The news comes shortly after it was revealed that Arsenal legends Thierry Henry, Dennis Bergkamp and Patrick Vieira have joined billionaire Spotify owner Daniel Ek in a bid to buy the club following fans’ protests against current owner Stan Kroenke.

Ek, estimated to be worth around £3.4billion, tweeted his intentions to explore the possibility of acquiring the club on Friday.

He said: ‘As a kid growing up, I’ve cheered for as long as I can remember. If KSE would like to sell Arsenal I’d be happy to throw my hat in the ring.’

Director Josh Kroenke, the son of the current owner, has insisted the club is not for sale, but the presence of three of its legends backing a new bid will apply pressure following recent events.

Sportsmail understands, however, that club chiefs have doubts over the seriousness of Ek’s takeover bid.

Their reservations stem from the fact that Ek chose to tweet about it rather than try to start official discussions, while roping in the Invincibles is also seen as a publicity stunt masking his lack of the necessary funds to buy the club.

A spokesperson for Spotify said: ‘With more than 70 million tracks and 2.2 million podcasts, Spotify continues to innovate and invest in providing our listeners with greater value than ever before, including the best audio content and user experience.

‘We offer a variety of subscription plans tailored to our users’ needs, and we occasionally update our prices to reflect local macroeconomic factors and meet market demands while offering an unparalleled service. ‘

WHAT DO MUSIC STREAMING SERVICES CHARGE AND WHAT DO YOU GET FOR YOUR MONEY?

Free with ads and shuffle only play

Lets you to listen to albums from start to finish

No adverts interrupting your enjoyment

No adverts interrupting your enjoyment.

Integrates with your existing music collection

Connects with your favourite bands