Squalid home where a husband left his sick wife to die

A cancer-stricken wife whose 67-year-old husband left her to die in a soiled armchair surrounded by rubbish and covered in maggots has been pictured for the first time.

Stomach-turning photographs taken inside the squalid Liverpool home where Richard Wallach allowed severely ill Valerie Wallach to fester in her own faeces were shared by the Crown Prosecution Service on Friday.

Wallach failed to look after his wife, 62, before she was eventually admitted to hospital riddled with skin ulcers and infested with flies and maggots in August 2017.

He was convicted on manslaughter by gross negligence on Friday and will be sentenced October 10. 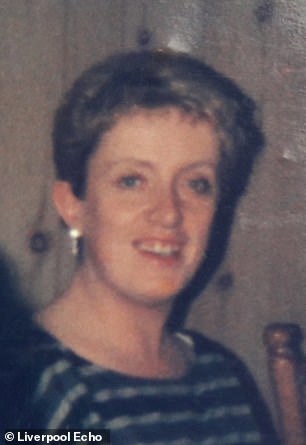 Horrific: Richard Wallach (left) was found guilty of killing his wife Valerie (right) through gross negligence after she was found to be severely ill and left to fester in the living room of their home in Toxteth, Liverpool. Now photos show the scale of the filthy conditions she was left in 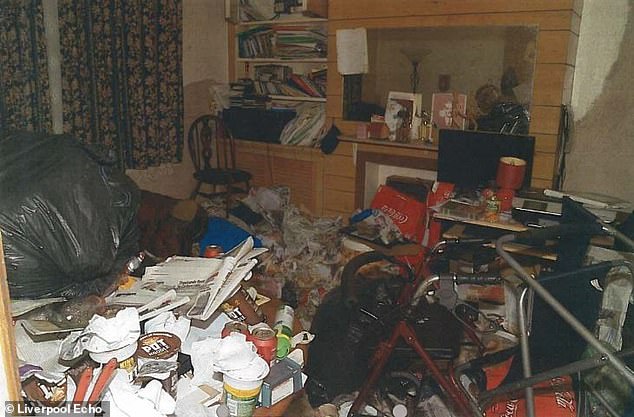 A number of framed photographs can also be seen sitting on shelves but the images are barely visible through the grime in the dark room. The floor is littered with rubbish and broken chairs

The appalling photographs show the true extent of the filthy conditions which doctors fear she may have been sat helplessly in for a number of months.

Pictures show a living room littered with rubbish strewn across the floor and broken chairs thrown on their sides among empty bottles of Coke and Pot Noodle cartons.

Wallach was still living in the home where his wife had been confined to an armchair ‘substantially soiled’ with urine and faeces, until the verdict was delivered today.

The court heard that Mrs Wallach died just 19 days after being taken into the Royal Liverpool Hospital and diagnosed with advanced breast cancer, organ failure and pressurised sores.

But hospital staff claim that her husband was more concerned with his own constipation when he was told that his wife would die.

Firefighters who were called to the house by paramedics who attended to check on Mrs Wallach, claim that she was living in the worst conditions they had ever seen.

Liverpool Crown Court heard that Mrs Wallach was admitted to the city’s Royal Hospital on 24 August 2017 with pressure sores and sepsis.

Her husband turned up at the Elms Medical Centre on 24 August and said his wife had collapsed in a chair at their home in Gwendoline Street nearby. 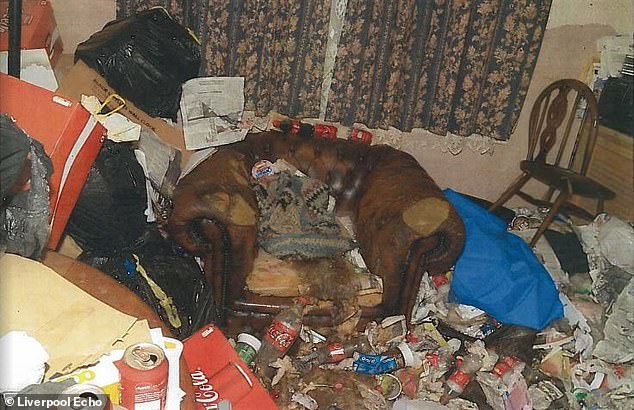 Filthy living room: The 67-year-old failed to look after his wife before she was finally admitted to hospital riddled with skin ulcers and infested with flies and maggots in August 2017

He said she was still responsive but was babbling. He said he couldn’t call an ambulance as he didn’t have a telephone.

The doctor thought it was more likely that she had been like that for weeks if not months.

She was in a critical condition and staff were shocked at the poor state of both her health and her condition. She was covered in faeces and there were maggots in the folds of her skin.

Some of Mrs Wallach’s pressure sores were categorised as Grade 4, the most serious type, and had even caused her skin to shed, right down to the bone.

Kate Johnston, a tissue viability support nurse at the Royal, said the patient was brought in in ‘an appalling state.’

She said: ‘Her clothing was covered in faeces and she hadn’t washed in some time.

Mrs Wallach died on September 12, 2017. An autopsy revealed the cause of death as multi-organ failure, breast cancer and infected pressure ulcers. 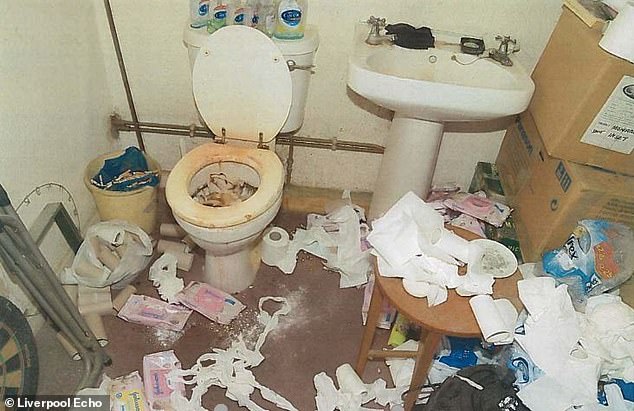 Paramedics who went to the address noted the foul smell and build-up of rubbish inside, and decided to wear protective clothing while entering. The toilet was overflowing and tissue strewn across the floor

The couple’s kitchen is also covered in open food containers and piles of rubbish.

In the tidiest room of the house, where Mr Wallach told the court he spent most of his time, cigarette packets and filled ashtrays can be seen on an ironing board that he used as a table.

The paramedics were shocked by what they saw when they arrived at the house. It was filthy and Mrs Wallach was in a chair, pale, struggling for breath, vacant and her skins was inflamed and covered in flies.

The paramedics and two fire fighters had to wear protective clothing to move her.

She was said to be in terrible pain. When she was admitted to hospital, Wallach told staff that his wife had been in that condition for a few days.

Paramedics who went to the address noted the foul smell and build-up of rubbish inside, and decided to wear protective clothing while entering.

The conditions were described as ‘truly appalling’, and there were a large quantity of bags of rubbish with rotting and mouldy food.

Emergency workers were forced to wade through the bags to reach Mrs Wallach. 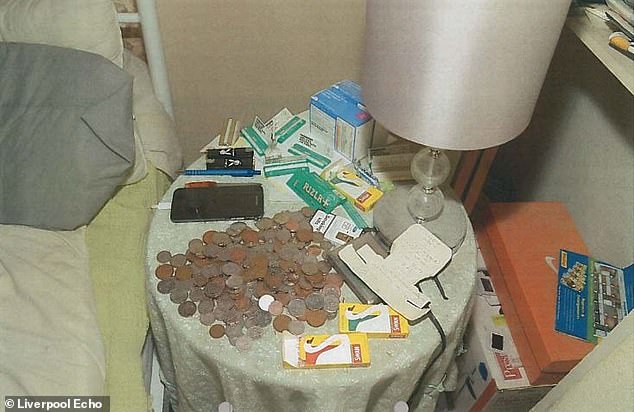 Coins, cigarette rolling papers and a filters were found on a bedside table among rubbish

Prosecutor Richard Pratt said: ‘The collective experience of the fire officers spanned well over 30 years – they had never seen a living human being in such a poor condition.’

After his wife’s death, Wallach was interviewed by police and later charged with gross negligence manslaughter.

He maintained that it had been her choice to spend all her time in the chair and he used to help her upstairs to the toilet but she had become immobile and so stayed in the chair and slept there.

Wallach claimed he would see her several times a day and would give her sandwiches and takeaway meals such as fish and chips, which she would feed herself, and give her coca cola to drink.

He told detectives, ‘We were together for 25 years and I loved the bones of her.’

In court, his QC David McLachlan asked if he was responsible for his wife’s death he replied, “I take offence at that. I am not guilty for the death of my wife, no way.”

Shown photographs of the state of the downstairs of the house Wallach, a former partner in a Cornish guest house, admitted: ‘I am an untidy person. I am just generally untidy.’

Wallach, who has been found by a psychiatrist to be suffering from ‘hoarding’ disorder, was also shown photographs of his wife in hospital and admitted the injuries were ‘very bad.’ 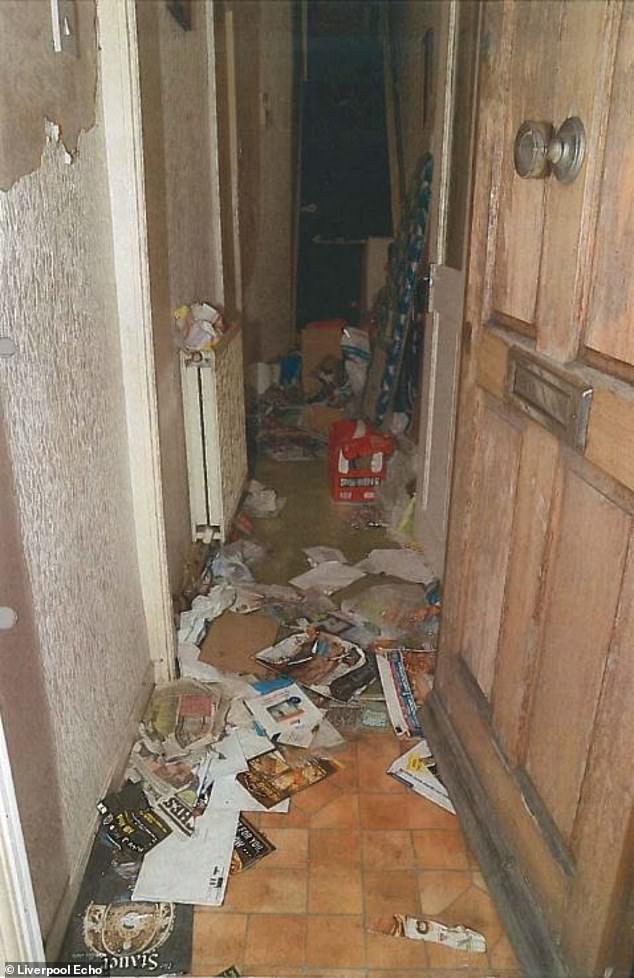 This disgusting hallway of the Toxteth, Liverpool home which the pair had lived in since 2003

He said: ‘I looked after her to the best of my ability. I assumed she was all right.

‘If she had been in pain she would have let me know and I would have done something about it.’

Asked why he had shown indifference about his wife’s grave condition at the hospital instead asking for help for his constipation he said he had no recollection.

He said that he assumed the hospital would make her better and did not think she was going to die.

Mr Pratt pointed out the ‘atrocious’ odour found by emergency workers but Wallach said he had not noticed and dealt with the smell by opening the window and using air fresheners.

Sharon Campbell, a lawyer with the Complex Casework Unit of Mersey Cheshire Crown Prosecution Service, said: ‘Mr Wallach said he was unaware of Valerie’s deteriorating health despite the fact he was the only person living with her and caring for her.

‘This is hard to believe, bearing in mind the condition in which she was found by the paramedics. He preferred to stay upstairs when “things deteriorated”.

‘He told police that he cared for her to the best of his ability, but there appeared to be no care of his wife in the last few months.

‘The condition in which Valerie Wallach was found was nothing short of appalling. Her last few months on this earth were spent in pain, filth and squalor.

‘Medical reports confirmed she died prematurely as a result of the pressure sores and associated sepsis.

‘The jury saw through his claims and found him guilty of gross negligence manslaughter. A shocking and disturbing case indeed.’