This is the heartwarming moment a squirrel appears to thank a woman for rescuing its injured baby after tugging on her pants to get her attention.

Tia Powell, 28, of Pulaski, Virginia, was walking in Kiwanis Park when she noticed a squirrel had ‘stood in her way’ and appeared to be trying to stop her from leaving.

The furry animal led her down a trail to a baby that she noticed had a wounded leg and was struggling to move.

Powell feared she couldn’t help the creature and began to walk away only to find the squirrel had followed her and was pulling at her leg.

She called friend Jasmine Brown, 28, and the pair transported the baby to safety over a gated fence and into a nearby tree cuddled in one of their jackets. 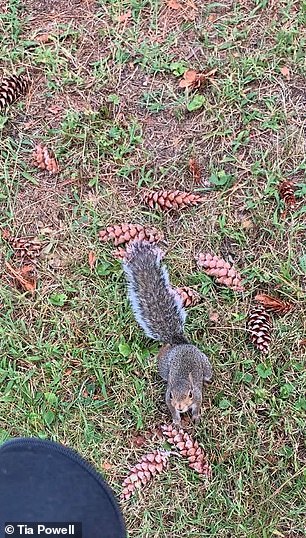 Tia Powell claims the squirrel stood right in front of her while she was on a walk in Kiwanis Park in Virginia. The animal seemed desperate to gather her attention and would later lead her to an injured baby that appeared to have been attacked by a cat 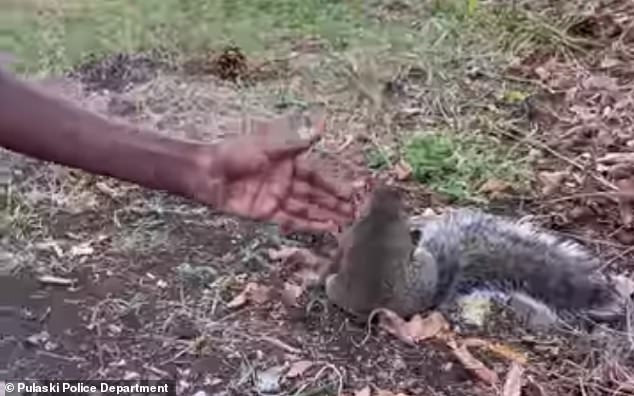 Powell called her friend Jasmine Brown and the pair managed to help the animal to safety and onto the other side of a metal fence. Later in a video clip shared by the police department, the baby squirrel appeared to thank Powell for saving them

Later in a touching scene the baby squirrel returned to brush up against Powell’s hand before running back to join its mom in a nearby tree.

The gesture appeared to be a ‘thank you’ from the animal who was grateful the pair had saved them from a cat who was standing nearby.

The sweet moment was filmed by Pulaski Police Department who attended after Powell called an animal rescue team.

Powell told DailyMail.com. ‘It was surreal and we as people don’t give animals credit they deserve.’

Brown explained that the squirrel was ‘very attached’ to them both throughout the incident on Friday.

The clever squirrel had led Powell to her baby who was limping near to the park entrance.

She believed a stray cat could have caused the injury but was not certain.

After the older animal refused to let her leave, she fed the pair a sandwich and watched them.

The squirrels later tried to escape to safety through a metal fence but only the mother could climb up it due to the damage caused to the baby squirrel’s leg.

Powell and Brown tried a number of ways to assist, including helping to carry it back  to the mother.

Powell told DailyMail.com ‘The mother kept going away and coming back to the baby. She was trying to get it to jump and all of that but wasn’t able to.

‘I was able to hold it alone and the mother was comfortable with me as well.’ 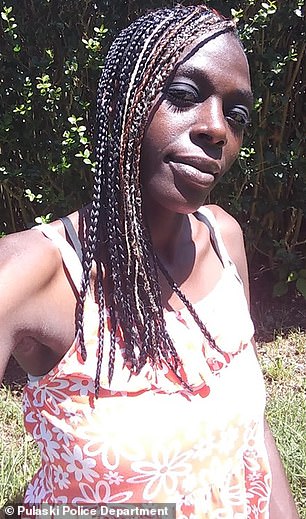 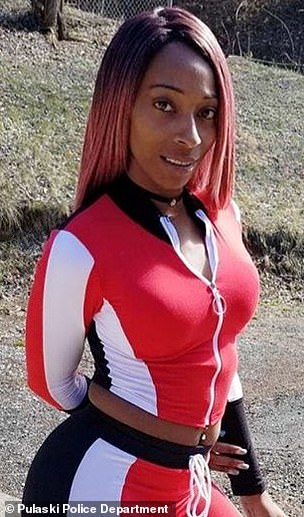 Powell (left) claimed to have been with the squirrel for at least two hours. Brown (right) also assisted in the rescue by jumping a fence 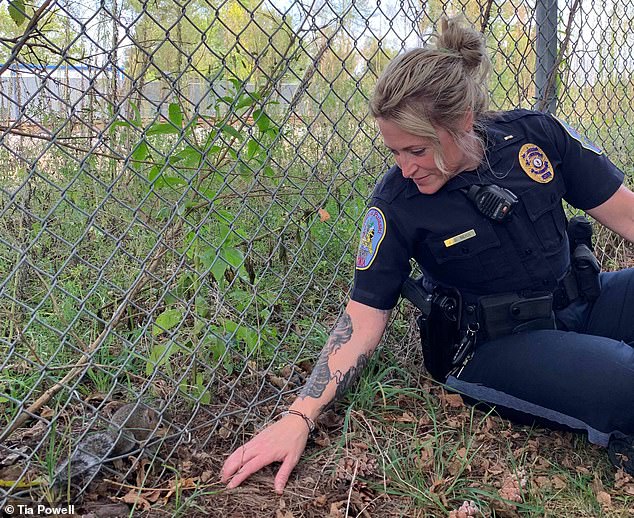 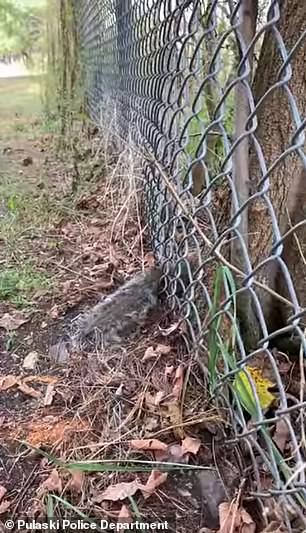 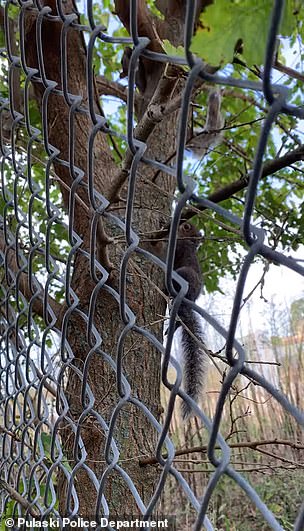 Later after the baby squirrel appeared to thank Powell, it ran through the fence. From there the animal continued up a tree to be with its mother

Eventually Brown was forced to put the squirrel through the fence in her jacket so it could be reunited with the parent on the other side.

Brown told DailyMail.com: ‘It tried to jump from tree to tree and when it feel we were right there to catch it.

‘It got back to its mom it felt great the mom. The mom lead the squirrel to where it needed to be safely.

‘I was terrified, I’ve never done this before but I would do it again if I had to.’

The clip of the grateful baby squirrel has been viewed more than 100,000 times since being posted by Pulaski Police Department.

Powell was been dubbed ‘the squirrel whisperer’ by the force online and returned to the spot with her children days later to see if the animals were still there.

She claimed to have spotted two squirrels and wondered if they were the pair she rescued.

Powell told DailyMail.com: ‘It was very heartwarming and still in shock about it all.’