High above Frigate Bay, a large brown pelican circles, pauses, does a swift about-turn, then swoops 20ft into the blue waters of the Caribbean.

A minute later, the same bird is perched nonchalantly on the side of a catamaran, digesting its breakfast, while we are tucking into bacon and eggs, and fresh fruit on the terrace of Timothy Beach Resort.

Such simple, thrilling pleasures are part of the daily diet at this resort on a prime position at the southern end of Frigate Bay, on the west coast of St Kitts. The banner above the entrance reads ‘Friendly, Affordable, Just Right’ — and that’s Timothy Beach in a nutshell.

There are glitzier hotels on the island, including a spanking new Park Hyatt, but we would not dream of staying anywhere else. This is the third year running we have taken a winter holiday here and we are already planning our next visit. We just love the place: three-star amenities, but with a five-star ambience.

If the pelicans are the show-stoppers, the other flora and fauna are just as delightful, turning breakfast into a feast we do not want to end. Above our heads, a dainty pink dove has built its nest in the eaves. On the next table, a tiny yellow bananaquit is pecking at grains of sugar. Beyond the swimming-pool, two monkeys sit on a wicket fence, scratching each other’s backs. A lizard stirs in the hibiscus bush.

Twenty years ago, when I first visited St Kitts, it was a well-kept secret, attracting few British visitors. That is changing fast, with direct flights from London — which start next month — two or three large cruise ships docking every day and some high-end developments, particularly in the Christophe Harbour area. 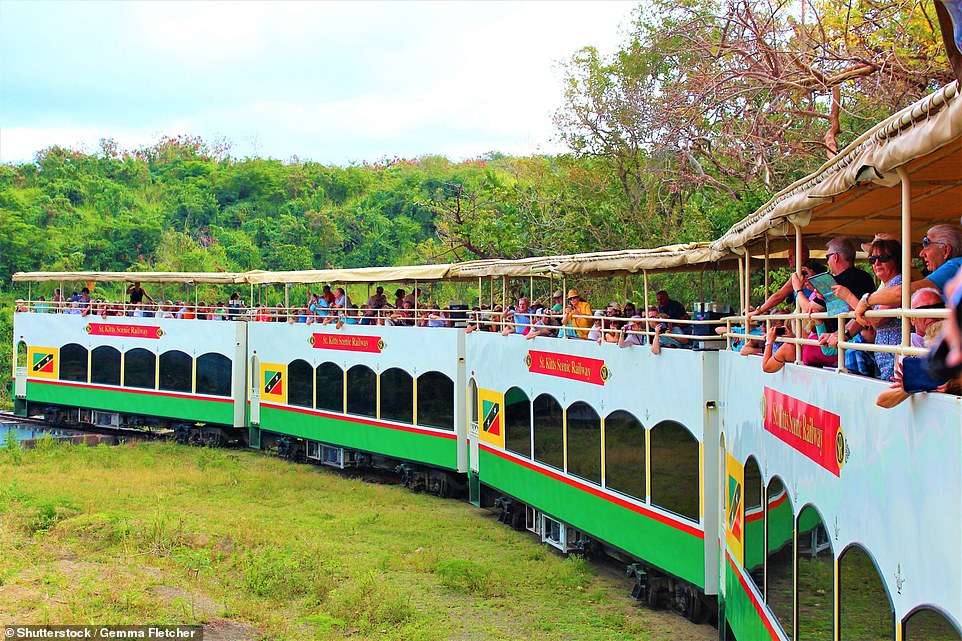 KNOW BEFORE YOU GO

Britons are still outnumbered by Americans and Canadians, and the woman on the next sunlounger is more likely to come from Michigan than Manchester. But if you like the idea of a laid-back Caribbean island that is not a millionaires’ playground, St Kitts is just the job.

Within a short walk of our hotel, there must be at least a dozen beach bars and restaurants, where one can have a rum punch or two, enjoy the sunset, then eat delicious local food at reasonable prices.

My favourite, against stiff competition, has to be the quirky Mr X’s Shiggidy Shack Bar and Grill (motto: ‘Time Well Wasted’), run by wise-cracking Amy from Louisiana and other extroverts.

The grilled red snapper, caught that morning, is out of this world and there is great live music twice a week.

Further afield, the ramshackle old capital Basseterre is an unhurried delight. There is a first-class museum of local history, well worth a visit, and a rabbit warren of shops and market stalls next to the port where the cruise ships dock.

But the focal point is the Circus, a small square dominated by a green clock-tower, where we spend many a happy hour on the balcony of the Lemongrass café, watching the world go by.

Dandies in pin-striped suits emerge from the Inland Revenue. Schoolgirls in tartan skirts josh with some dreadlocked coconut-sellers.

An old lady with a bright red parasol waits at the pedestrian crossing. There is a large cockerel squawking its head off just 20 yards from the bank. Taxis hoot, friends exchange high-fives, burly policemen lounge in doorways, doing diddly squat.

Most days we explore the island in our hire-car, savouring every minute. Scenically, St Kitts is far prettier than Barbados or Antigua, with cloud-capped mountains to the north narrowing to a peninsula of gentle hills and secluded bays.

The sister island of Nevis, which is another Caribbean beauty, is just a few miles away and accessible by ferry.

If barflies and beach bums are spoiled for choice on St Kitts, there is plenty for history buffs, too. The rugged old fortress on Brimstone Hill is a World Heritage Site, dating back to the days when the French and the British vied for mastery of the region.

Wander round the cramped barracks and the high battlements, topped by cannon, and you get a real flavour of the era. Two memorable half-day excursions complete our ten days of sheer pleasure on the island. 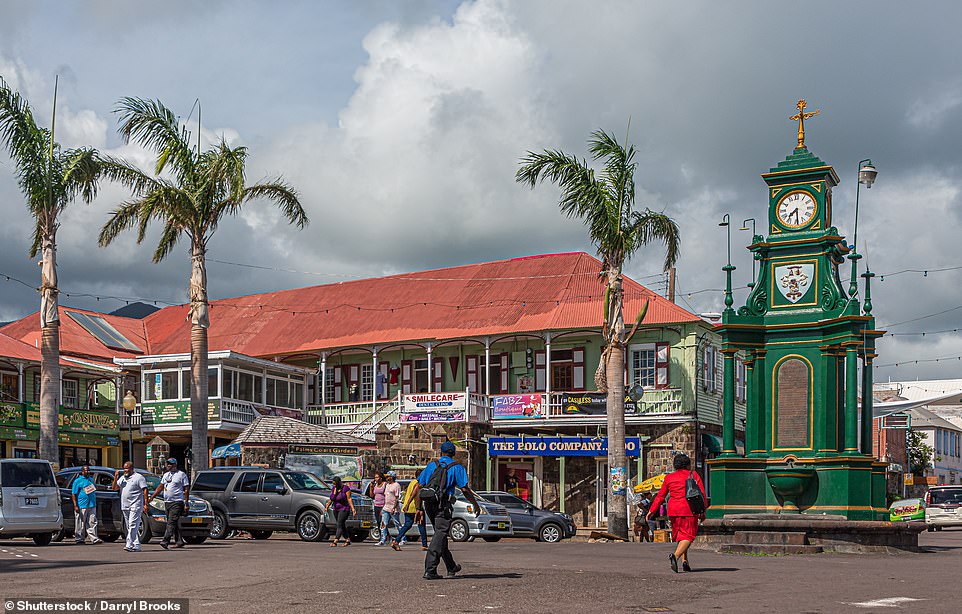 Lively: The Circus, a small square dominated by a green clock-tower, is a focal point in St Kitts

Price is for room only, based on two sharing, and includes direct return flights from Gatwick.

Car hire costs from £30 a day with ABC Car Hire (alancars.com). Although taxis in St Kitts are not unreasonable in fares, it is worth considering hiring a car for at least some of your stay to explore the outlying parts of the island.

A round-island trip on the St Kitts Scenic Railway, where rum punches and songs by a local choir add to the fun, takes us past dilapidated old sugar plantations and tiny villages that look as if they haven’t changed in centuries.

Schoolchildren wave at us from the shade of a mango tree. Breakers from the Atlantic crash against the sargasso-strewn shore. A smiling pig gets up on its trotters to have a better view from its sty.

Twenty-four hours later, we are enjoying St Kitts from the water, during a snorkelling trip on a catamaran.

The crew of Blue Water Safaris are comedy gold, from Captain Crackers in his pirate hat to his preposterously beautiful son, his ripped torso glistening as he poses for the cameras.

There is non-stop banter on board, plus the usual lashings of rum, and the snorkelling is pretty decent, too.

As well as shoals of prettily striped fish, we catch glimpses of turtles and large rays.

As we take our leave of St Kitts, it is not just the holy trinity of sun, sea and sand to which we make genuflection, but the people. On some Caribbean islands, the posers sometimes seem to outnumber the real people, but on St Kitts, you get a true mixture of locals, expats and visitors, all happily sharing the same space and all determined to savour life in the slow lane.

From octogenarian Popcorn, ex-British consul and local legend, to Magic, the softly spoken masseur on the beach, to Pauline from Doncaster, who moved to St Kitts 30 years ago and, with her partner, has made Serendipity one of the best restaurants on the island, there are lovable characters everywhere you turn.

If you are after the real Caribbean, unhurried and unpretentious, look no further.