St. Louis police to investigate officer who was filmed ‘pummeling a man when asked about his job’

A St. Louis police officer is under investigation for allegedly assaulting a man at a gas station earlier this month, according to local authorities.

A spokeswoman with the St. Louis Metropolitan Police Department told DailyMail.com that an internal investigation was being conducted after surveillance video of the shocking confrontation was released.

The incident occurred on August 8 at approximately 9.30am a BP gas station on Martin Luther King Drive and involved a black off-duty officer and 31-year-old Bryan Boyle.

A spokeswoman with the St. Louis Metropolitan Police Department told DailyMail.com that an internal investigation was being conducted after surveillance video was released of the August 8 fight

As Boyle reaches for the juice he purchased, the officer – identified as Officer Brandin Neil – shoves him and sends him flying backwards.

Neil yanks his Taser out and aims it at Boyle, pushing him back as the man comes closer.

Boyle walks back to the register to grab his items, with the officer holding on tightly to his hands, and the cashier hands him his money. 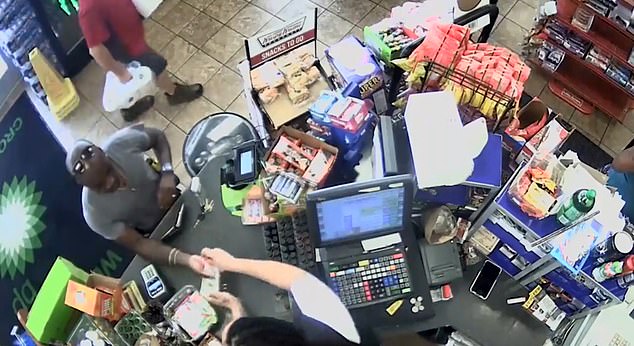 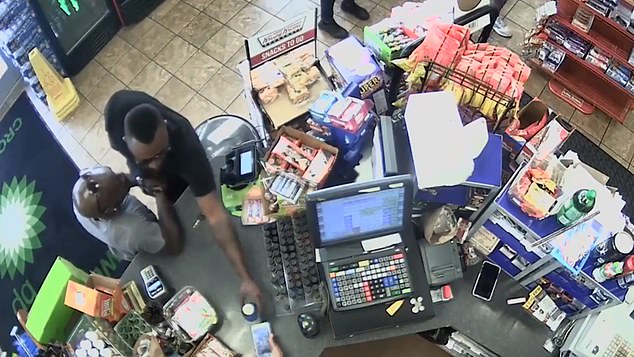 The officer tries to detain Boyle but as the man resists, the policeman starts punching him in the head.

Boyle can be seen defending himself but not returning any of the hits.

Soon the two men are separated and Boyle looks at his person and appears to be injured.

Boyle and the officer talk some more but Neil is steady in trying to apprehend the customer.

The two continue arguing before the officer attempts to detain Boyle again. This time, Boyle grabs Neil and takes him to the ground. He waits for other policemen to arrive before surrendering to police. 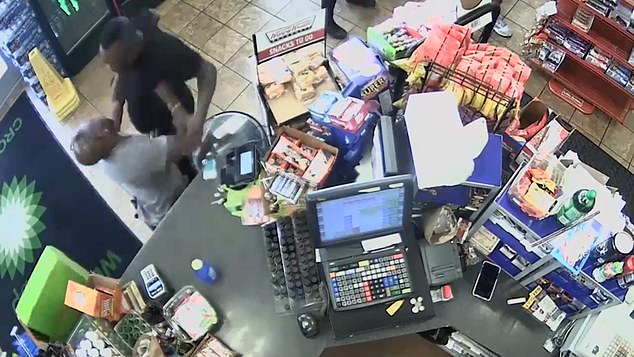 As Boyle reaches for the juice he purchased, Neil shoves him and sends him flying backwards

Boyle explained to the St. Louis Post Dispatch that he had been asking the officer about his job when the attack occurred.

He added that the man never even identified himself as an officer until he tried to make the arrest.

Sources say the man is a detective with the department and has been on the force since 2017. He was driving a police vehicle at the time of the altercation. 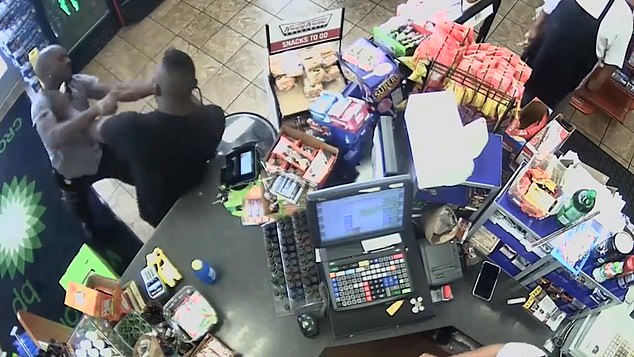 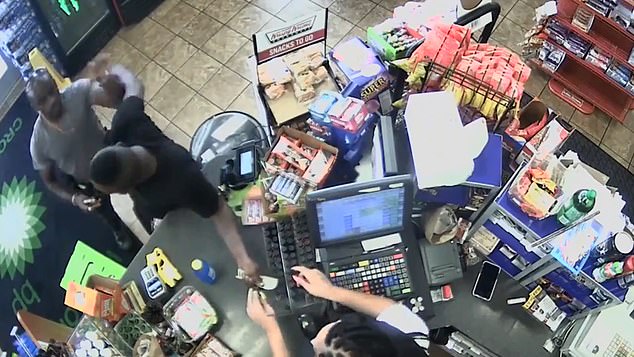 He even threatened the man with a Taser (on the counter)

Witnesses corroborated the detail that Boyle had been asking about the police force, expressing his own interest for joining.

The father-of-two shared that he had been buying some juice for his 11-month-old daughter when Neil jumped him.

‘He tells me I’m in his personal space, but I was like, “How am I in your personal space when the cashier is serving me?”‘ Boyle explained.

‘The next thing I know, he shoved me, pulled out his Taser and put it on the counter and starts telling me to put my hands behind my back, and he just starts beating me in my face with his handcuffs. 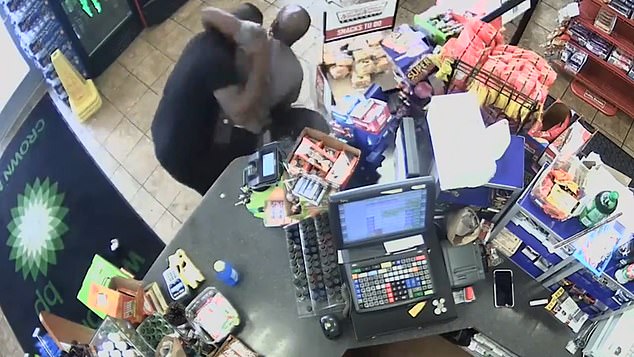 ‘I’m like, “Dude, what is going on?” I was really confused. I was trying to tell him you’re an inspiration to me. You are doing something I want to do. And he comes after me again. I look at him like he’s a king and he’s still trying to put my hands behind my back for no reason.’

Boyle explained that he didn’t fight the officer because he feared for his life.

‘If I would have fought back, he would have said he was in fear for his life and he could have killed me,’ he asserted. ‘I was just trying to ask him, “What did I do to you?” But something told me, “Do not swing back,” because I would have been dead and wouldn’t nobody have known what happened.’

With Neil also being black, Boyle felt even more disheartened by the whole ordeal.

‘For my own brother to not accept me the way he didn’t accept me,’ he said said. ‘I’m lost.’

Backup was called to the scene and it was then that Boyle allowed himself to be apprehended. 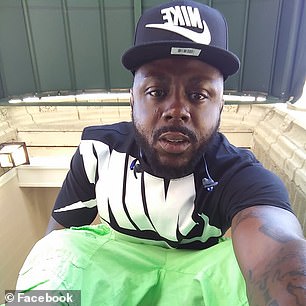 Boyle no longer wants to be on the police force

Boyle said: ‘When I heard all of the police officers come in, I hurried up and gave them my arms. just wanted to know why I was under arrest.’

The man was taken to a local hospital to be treated for cuts to his face.

‘Even with blood pouring down my face, I was telling him, “I look at you as an inspiration.” I don’t understand what happened, why he did that to me,’ Boyle said.

And since the incident took place, Boyle has no plan of joining the police force.

The concerned parent wondered: ‘I wanted my sons to look up and see it’s OK to do (police work), but imagine if my son was with me? Would it change his mind about the police, too? I’m figuring out a way to change my everyday living to show them something different.’

Store clerks were surprised by the entire ordeal and refer to Boyle as a ‘regular’ at the store. One clerk even called Boyle a ‘VIP’.

‘I am all for the police, they have a very dangerous job,’ Aamer Abusaid, the store manager, said. ‘But this man should not be the police.’

The Post Dispatch found that on March 26, Neil was working a secondary shift at Wheelhouse when he pushed two people. He was off-duty at the time.

Neil was featured in a 2018 Fox segment about the police department’s attempt at finding more minority recruits. 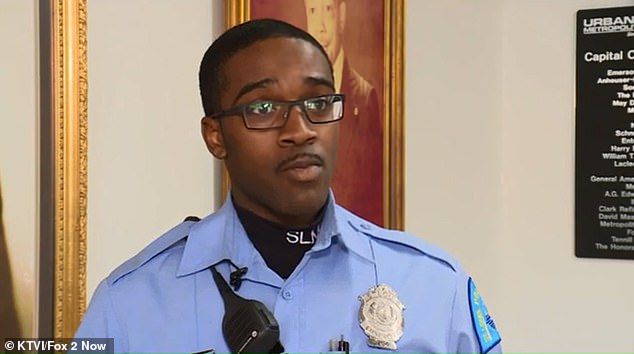