Stabbing victim left message: ‘This place is a bloodbath’

A woman used a jagged piece of broken plate to kill her boyfriend.

Sarah Lewis plunged it into the face of her partner Paul Lavelle at his flat last May.

The 50-year-old’s nostril was left badly cut resulting in him bleeding to death during the night.

Sarah Lewis, 46, plead guilty to manslaughter after stabbing her boyfriend Paul Lavelle in the face with a piece of jagged broken plate, resulting in his death

Lewis was jailed last week for seven and a half years at Liverpool Crown Court, after admitting manslaughter.

The 46-year-old was accused of murder but pleaded guilty to the less serious charge on the second day of her trial.

As Mr Lavelle was dying at his flat in Old Chester Road, Rock Ferry, Birkenhead, he phoned a business client and left a voicemail which said: ‘This place is a bloodbath, it’s a f***ing bloodbath.’

Following the attack, Lewis took several photos of her boyfriend’s face and then left to spend the night at her sister’s home, despite having not spoken to her for about 15 months. 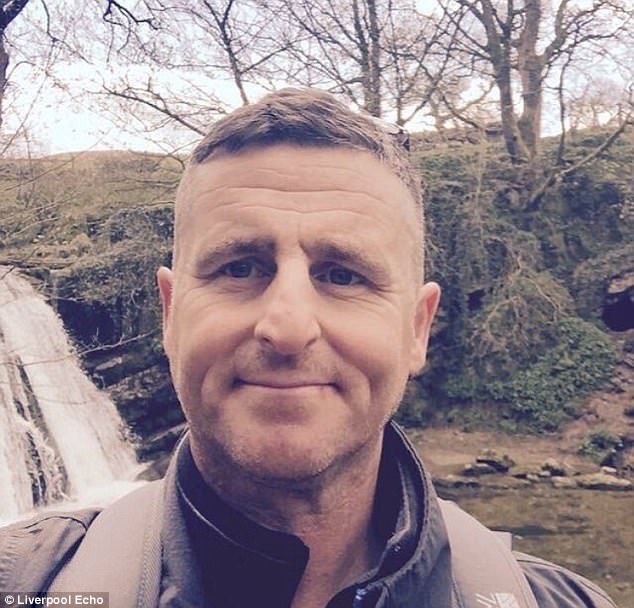 ‘We have not only lost a dad, we have lost a friend and a role model’: In an emotional statement, Mr Lavelle’s son Jake said how much he misses his father

When she returned the next day she found Mr Lavelle dead.

He had not taken any steps to get help, or contacted the emergency services but had repeatedly phoned Lewis, making eight calls, all of which went through to her voicemail which she deleted.

Lewis, of Croxteth Avenue, Seaforth, and Mr Lavelle had been in a relationship for around a year after meeting on a dating website.

But their relationship was often stormy, the court heard, especially when they had drunk excessive amounts of alcohol, with police being called out on numerous occasions.

Tania Griffiths, QC, prosecuting, said: ‘We submit this was a deliberate and premeditated attack, not planned but premeditated, in that she threw the plate and shattered it, before picking up the shard.’

He said: ‘Losing my dad has caused me more pain and heartbreak than I can put into words 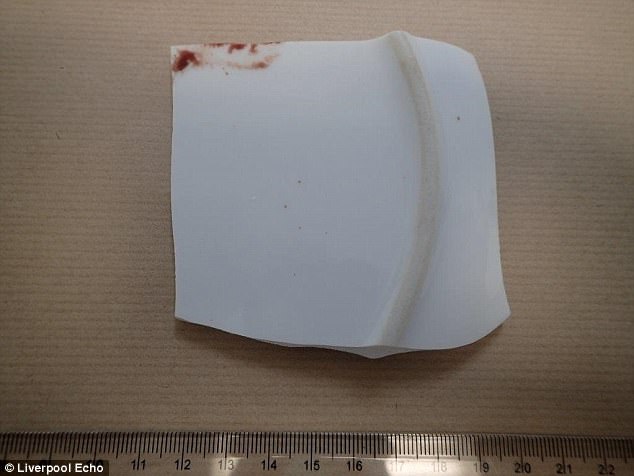 The plate used by Sarah Lewis to kill Paul Lavelle. Mr Lavelle repeatedly phoned Lewis after the attack, making eight calls, and all went through to her voicemail which she deleted

‘I struggle to deal with the fact I will never see, hear, or feel my dad again at a time when I need him most

‘We have not only lost a dad, we have lost a friend and a role model.

Throughout my life, I will always have a part of me missing.’

A statement from Mr Lavelle’s mum, Barbara Lavelle, said: ‘Paul was my first-born son, I miss him greatly. I feel I have been robbed of something I will never get back.

‘I realise I will never see his cheeky smile or spend Christmas with him.’

Dorian Lovell-Pank, QC, defending, told the court: ‘Through me, Sarah Lewis wants Paul Lavelle’s family and friends to know she is deeply, deeply sorry for what she did to him and how her actions have affected his family and so many others.

‘She, too, will have to live with what she has done for the rest of her life.’

Judge David Aubrey, QC, sentencing, said he was satisfied Mr Lavelle had not tried to harm Lewis during the incident on May 27.

He told Lewis: ‘It was a sad and unusual death and no-one would have expected him to die from that injury, but he did, and you and no-one else bear full responsibility.’

A statement from Mr Lavelle’s family after the case said: ‘The Lavelle family would like to personally thank Merseyside Police and all involved for their support, compassion and hard work shown throughout this devastating ordeal.’

Detective Inspector Allison Woods, of Merseyside Police, said: ‘The sentence of Lewis today will hopefully provide some comfort to Paul’s family, who continue to suffer the consequences of her actions that day.

‘Lewis only chose to accept her guilt during her trial, dragging out the suffering of Paul’s family and friends in the process.

‘I would like to thank Paul’s family for their bravery and courage during this ordeal, and assure anyone who is involved in domestic abuse to come forward and speak to people who can help the situation before it escalates.

‘Domestic abuse can happen to anyone at any time regardless of gender, age and sexuality. It is important for people to recognise when it is happening to them and that confidential support and advice is available to those that need it.’