Stacey Abrams said Sunday that due to her faith she was pro-life until college changed her perception.

The Georgia Democratic gubernatorial candidate told CNN’s State of the Union program that she now views it that her faith should not allow her to impose value systems on others.

‘I have thought about my faith a great deal,’ Abrams said in the Sunday morning interview when asked about how her belief system affects her view on abortion.

‘In fact,’ she continues, ‘I was anti-abortion until I went to college. And, there, I met a friend who has my shared faith values, but we started having conversations about what reproductive care and abortion care really is.’

She said college gave her a ‘different perspective’ on abortion and what role the legislature should play in health care.

Abrams is vying to take Republican Georgia Governor Brian Kemp’s seat in the November midterm elections as he runs for his second term.

Also running in the general election this fall are Libertarian Shane Hazel and independent candidates Elbert Bartell and President Boddie, a write in.

Abrams’ previous view on abortion is shared as the issue becomes a main point for Democrats trying gain traction in the midterm elections.

The left sees the issue as a way to hold onto their majorities after the Supreme Court ruled in June to overturn the 50-year precedent set in Roe v. Wade that protected abortion rights at the federal level.

When asked about keeping abortion legal in Georgia should she take residence in the governor’s mansion, Abrams said, ‘What I understand is that the majority of Georgians do not like this law. It is an extreme ban. It is dangerous, and it affects women across the spectrum.’

Georgia, prior to the ruling this summer, already had some of the most restrictive abortion laws.

Kemp signed in 2019 a law that banned abortion at six weeks into a pregnancy, which is typically when a fetal heartbeat can be detected. In the case of unplanned pregnancies, many women still do not know they are pregnant at six weeks. 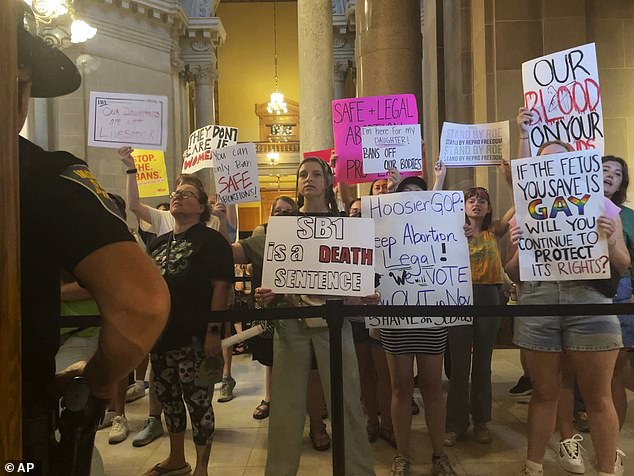 Democrats see abortion as a mobilizing issue for the 2022 midterm elections after the Supreme Court overturned Roe v. Wade earlier in the summer

The Supreme Court decision, made possible by a conservative majority, sent abortion laws back to the states rather than keeping it federally protected.