A gourmet coffee shop has caused uproar with parents by banning all children under the age 12.

Furious families have blasted ‘pompous’ bosses at Fifteen on the Corner in Lichfield, Staffordshire, after they were turned away from the premises with their youngsters in toe.

The cafe has faced a deluge of angry reviews on TripAdvisor with ‘gobsmacked’ customers calling for it to be boycotted.

Mother-of-two Laura Gee, 35,  said: ‘I think its pathetic really and the place looks half empty since they started their absurd policy.

Furious families have blasted ‘pompous’ bosses at 15 on the Corner in Lichfield, Staffordshire, after they were turned away from the premises with their youngsters in toe

‘They have given no explanation as to why they are doing this and alienated half the town, who now think they are just stuck-up, snooty and pompous idiots.’

One visitor wrote on TripAdvisor: ‘I didn’t manage to get two feet through the door before being asked to leave because of my children.

‘It’s disgusting. My wife and I, along with our three children, had walked two miles, just to be turned away and treated poorly.

‘It’s not my place to say a policy isn’t correct but speaking down to customers and embarrassing them just for having children?

‘I wouldn’t recommend this cafe to anyone, not if you have a slither of dignity.’

Another mother said she was ‘amazed, embarrassed and totally gobsmacked’ that she was banned from a café for simply having children.

She added: ‘You’d think I’d have brought a dog in.’

One parent added: ‘What a ridiculous policy. There was no reason provided and I was so shocked that I did not question it. It was only when I was outside that I realised how awful this was.

‘We soon found another better and less pompous place to have a drink. Hopefully they will change their policy or go out of business soon.’

Another said: ‘One morning we were turned away by a rude middle aged man who said they no longer allowed children into the cafe.

‘I often walk past and smile now that I see the cafe is now half empty and has enraged half of the parents in Lichfield with their short-sighted and discriminatory policy.’

One reviewer said her 10-year-old daughter was left traumatised after being embarrassed so publicly and refused to go into another café after the ordeal. 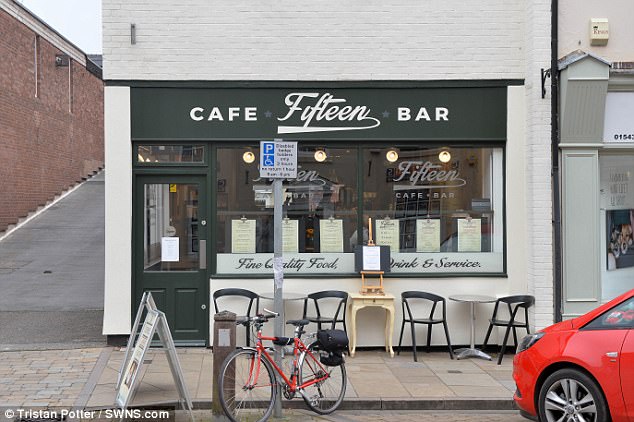 The parent added: ‘We were told, loudly, that there are no children under 12 allowed. There was no sign outside to alert us to this policy.

‘My daughter is 10 and a sensitive soul at that. Once she heard this she was mortified, and as we left the cafe she was very embarrassed, thinking that she had done something wrong.

‘She didn’t want to go into another cafe for fear that she wouldn’t be allowed in.

‘This cafe made my daughter feel small and worthless, and I’m truly shocked that it is legal to treat a section of society like this. It’s awful.’

However, not everyone disagreed with the café’s ban and believes the policy is a good idea.

Another reviewer Marie C said: ‘Peace at last. The ban is brilliant for me as a retired person as I do not want to be surrounded by small children when I am eating.

‘And Lichfield is full of coffee shops where children are allowed.’

Another person added: ‘It’s a welcome change not to have kids screaming and running around.

‘There are plenty of places to take children and it’s wonderful to find an adult friendly venue. Thank you!’

When approached for comment, a female worker at the shop confirmed the ban but added: ‘The owner is out of the country until next week so there’s nobody here that can comment.’