When Damien Zoyo took his mates away to celebrate his forthcoming wedding, it turned into a stag do with a difference.

He and his pals went walking in the Highlands and spotted a very rare white stag just 200 yards away.

Legend has it that this rare animal brings good luck to those who see it.

Mr Zoyo, 30, and his friends were in the Cairngorms National Park when they came across a herd of 200 red deer.

The group initially thought they were ‘shadowy figures’ on the hillside before Mr Zoyo noticed the bright white stag.

When Damien Zoyo took his mates away to celebrate his forthcoming wedding, it turned into a stag do with a difference when they found an extremely rare white hart stag in the Scottish Highlands

It is unknown how many white deer are living in the wild, but only a handful have been spotted in Britain this century.

Likened to unicorns, the majestic creatures were coveted by kings and feature in the mythology of different cultures, including the Arthurian legends.

The group of four also managed to spot the animals on their return journey.

Marc Brunelle, 44, who pictured the deer, said: ‘The weather was incredible, I could never even imagine Scotland to have weather like this, so we decided to go for a walk.

‘We were getting into the middle of the wilderness when we spotted the herd.

‘There were about 200 of them — it was magical. The groom is good at spotting animals and he saw the beautiful white one.

‘We got about 200 metres from them but it was clear they didn’t want us around so they started to walk away.

‘We continued with our walk but when we walked back later we saw them again.’

It is thought that this could be the first time a white red deer has been spotted in the wild in recent years.

Charles Smith-Jones, Technical Adviser at the British Deer Society said: ‘It’s definitely a white red stag. This is very unusual. You don’t see many of them in the wild.

‘They are that way for a reason but being white is only good when there’s snow.

‘There’s some lovely old stories about them. King James I spent four years trying to get a white deer captured to have in Windsor Park, but they never actually managed it.

‘In some cultures they are seen as messengers of the gods so they’re left well alone.’

Red deer, which are found in the Scottish Highlands and the South West of England, usually have a rusty red coat which turns brown in the winter. 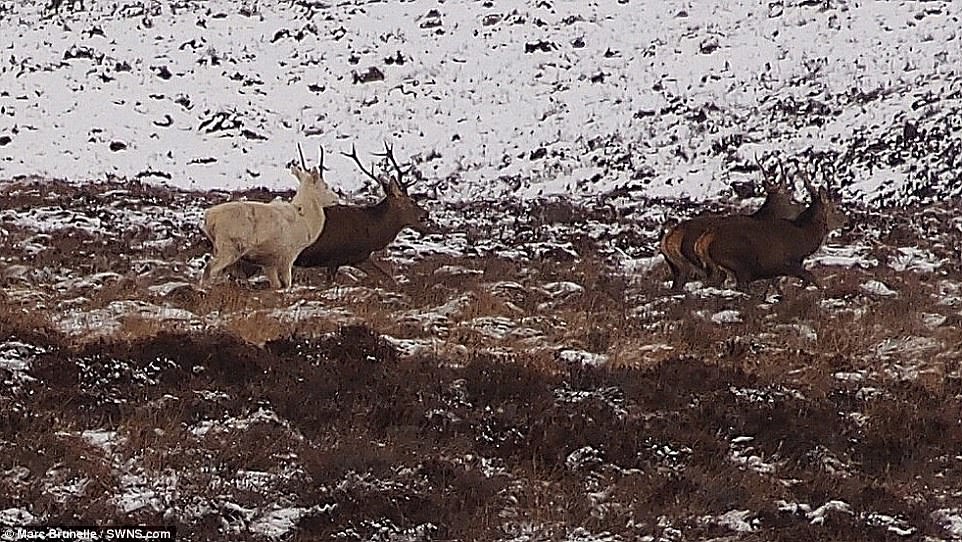 Likened to unicorns, the majestic creatures were coveted by kings and feature in the mythology of different cultures, including the Arthurian legends. Only a handful have been spotted in the wild in Britain this century

It is thought the white appearance is caused by leucism – partial loss of pigmentation caused by a reduction in multiple types of pigment, not just melanin.

A small number of deer are albinos and are identifiable because of their pink eyes.

It is unknown if the white deer spotted in the Cairngorms has albinism or leucism.

The shocking white colour of the deer often puts the animal and its herd in danger as they attract the attention of poachers.

The pale animals are often called ‘Judas’ deer as their presence can betray the whole herd.

Mr Smith-Jones said: ‘For any animal coloured so brightly it’s very difficult for them to survive. They’re so visible they are targets.

‘If you have a white animal in a group of animals it immediately draws attention.’

The friends hope the sighting is a good omen ahead of Mr Zoyo’s wedding to Caroline Aulen, 34, at the end of the month. 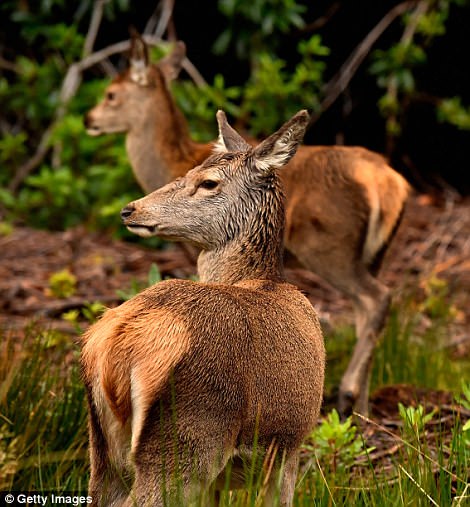 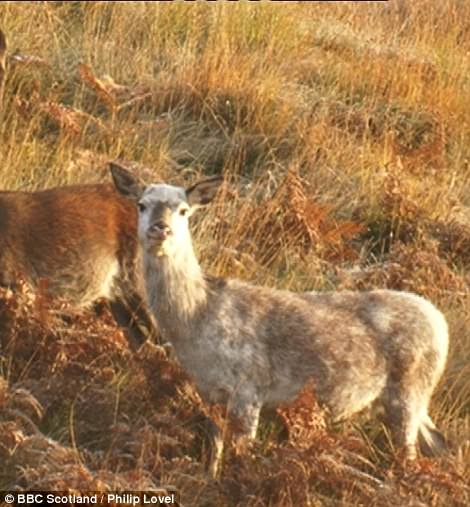 Red deer (left) usually have a rusty red coat which turns brown in the winter, while white deer (pictured right by BBC Scotland) are thought to have a rare genetic condition called leucism

Over the centuries, white deer have become an almost mythical figure and are coveted for their purity and good fortune.

According to Scottish legend, King David I was hunting in the 12th century when a white stag charged him.

When he grasped its antlers they miraculously turned into a large cross.

He was then inspired to build a shrine to the Holy Rood – meaning Holy Cross – at the site of the Queen’s Holyrood Palace.

In Arthurian legend, the white stag is an animal that can never be caught and represents the quest for spiritual knowledge.

King Richard II, who ruled in the 14th century, also used the deer, or White Hart, as part of his crest.

According to Celtic legend, it was unlucky to kill a White Hart, while the French thought harming one of the animals would lead to a life of unrequited love. 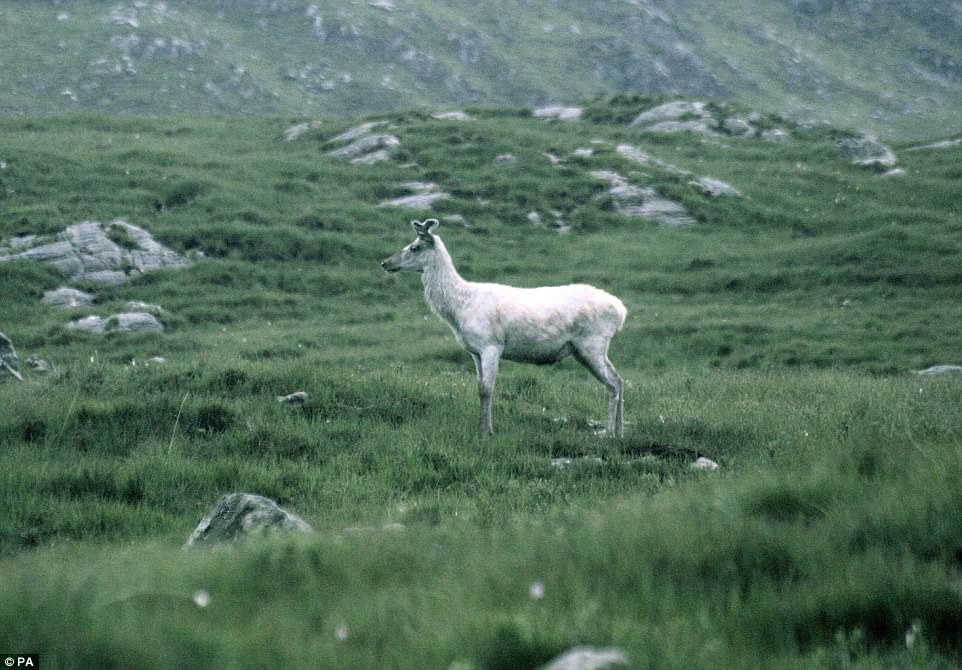 In the past decade, a handful of white deer have been spotted in the New Forest, on the border between Devon and Cornwall, and in Dumfriesshire

In the past decade, a handful of white deer have been spotted in the New Forest, on the border between Devon and Cornwall, and in Dumfriesshire.

Many of these sightings were of fallow deer, who are more commonly white.

‘The white colouring is probably caused by leucism, which is a rare genetic condition that reduces the pigment in the animal’s hair and skin.