Stamp duty calculator: How much will you pay on property?

Our calculator below shows how much stamp duty you would pay on a property purchase.

> Check the best mortgage rate you could apply for

How much tax would you have to pay on a home or buy-to-let?

Stamp duty is charged on the purchase price of a home.

First-time buyers now have a stamp duty exemption up to £300,000, while bills were eased for some home buyers further down the price ladder and cliff edges removed in a reform four years ago.

In April 2016, stamp duty on buy-to-let and other additional properties was reformed, with the addition of a new 3 per cent surcharge on all rates. For a £250,000 property that is the difference between a £2,500 stamp duty bill for owner occupiers and a £10,000 for a landlord.

How stamp duty has changed

Stamp duty is charged on the purchase price of a property.

Until 3 December 2014, it was charged slab-style and percentages above thresholds were imposed on the full purchase price.

Reforms in the Autumn Statement of 2014 by then Chancellor George Osborne mean that it is now levied progressively, like income tax, with percentages stepping up above thresholds.

In the 2017 Autumn Statement, stamp duty relief for first-time buyers was announced. They pay nothing up to £300,000 and if they purchase a home costing up to £500,000 they only pay stamp duty between those two figures. If they buy a home costing more than £500,000, they must pay full standard stamp duty.

Buyers, including both parties in a joint purchase, must have never owned a property in the UK or abroad before to qualify.

House prices have risen substantially over the past 20 years, meaning that stamp duty has raked in much more for the Treasury

Before Gordon Brown’s time in charge of the nation’s finances stamp duty was a flat rate of one per cent above £60,000.

This meant that it was a minimal cost for home buyers, particularly as the average home cost £58,200 in May 1997, according to the Nationwide index. 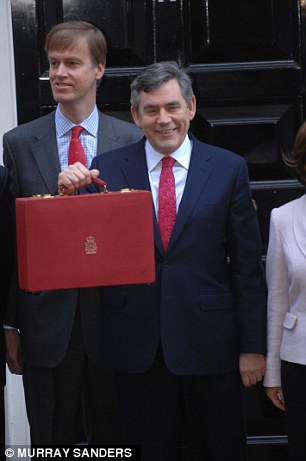 During his time as Chancellor, Gordon Brown ratcheted up stamp duty rates

Despite the punitive nature of the higher bands, they never rose with the huge house price inflation seen since their introduction.

If stamp duty thresholds had risen in line with average property inflation since 1997, as measured by the Land Registry’s quarterly house price figures, by December 2014 when the slab system was axed they would have been:

What you need to know about buying a home

Buying a home, whether it is your first-time or not, can be a daunting experience.

From the initial hunt trawling through property websites, to finally getting the keys, it can be an arduous process with plenty of tricky hurdles to overcome.

From what you can afford, to how to decide whether it is a buyer or seller’s market, how much to offer and how to make sure you secure that home and it doesn’t fall through, this is essential property-buying listening.