Stansted Airport ‘shambles’ as all flights cancelled after bus fire

Passengers have slammed Stansted Airport’s response to a bus fire outside the terminal which forced the cancellation of all flights yesterday evening.

The airport was plunged into chaos in the wake of the fire, which broke out at 4.20pm, sending thick black smoke billowing into the air.

But although the fire was brought under control within 20 minutes, it was announced at 8pm that all flights until midnight would be cancelled – despite an earlier announcement that they would be ‘returning to normal operations’.

The airport has since apologised for the disruption caused, but stranded passengers took to social media to vent their frustration.

Holidaymakers going away for the Easter weekend are facing chaos this evening as all flights from Stansted were cancelled, after a fire broke out on a car park shuttle bus at the airport near London 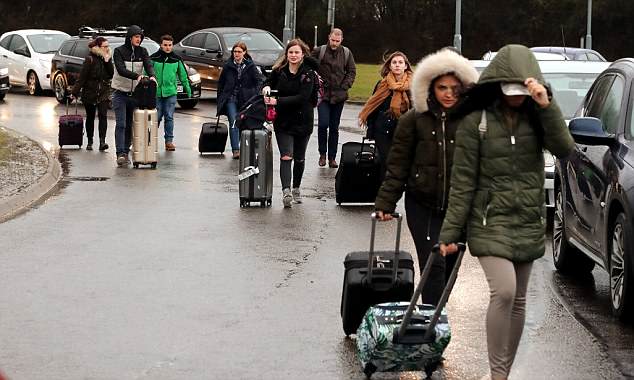 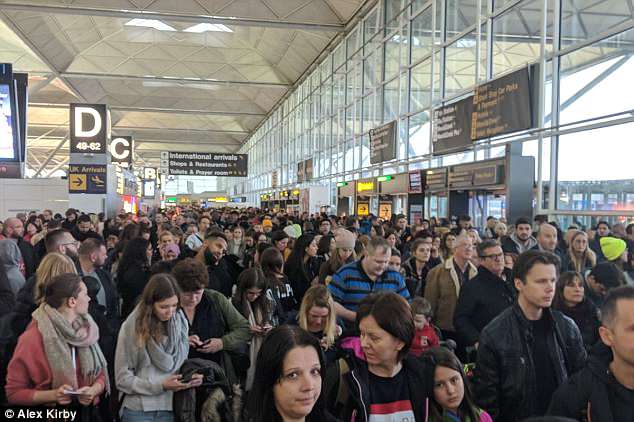 One passenger labelled it ‘an utter shambles’ while others complained of ‘third world’ conditions and demanded to know if they would be offered compensation.

Another wrote: ‘No staff in sight just announcements. We see this time and again at Stansted. Bloody disgraceful!’

Mirela Zarichinova said: ‘They wouldn’t let us inside the terminal because it is apparently packed. No information. No security. No staff members around.’

Another Twitter user said: ‘No one got to fly! A bus caught on fire outside the building. Why did everything else fall apart?!’

Responding to the comments, a spokesman for Stansted Airport insisted that they had followed the proper procedure, and that information was being given to passengers in what was a ‘difficult’ and ‘fast moving’ situation.

Some passengers were evacuated with others reporting they were stuck outside the airport and pictures showing long queues inside the terminal.

A Stansted statement on Twitter said all flights until midnight had been cancelled, and said passengers were ‘politely asked to leave the airport’. Today the airport apologised and said it was open as usual.

Passengers earlier reported being stuck outside the airport, with Sarah Hinch asking Ryanair on Twitter: ‘We were due on the 6.30 pm flight to Dublin is it delayed? We can’t get into the terminal.’ 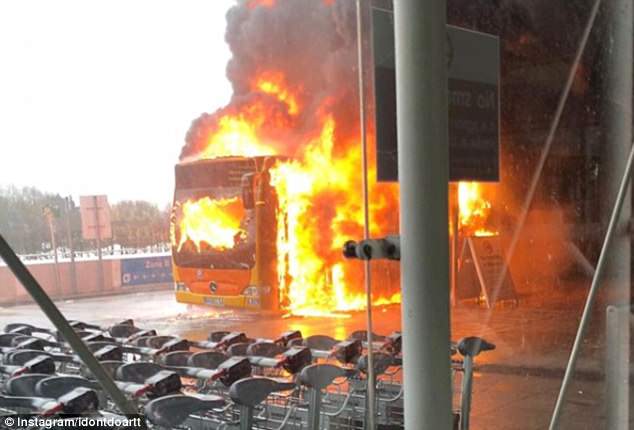 A fire broke out on a car park shuttle bus at Stansted Airport in London, sending plumes of thick smoke emerging from the burning wreckage 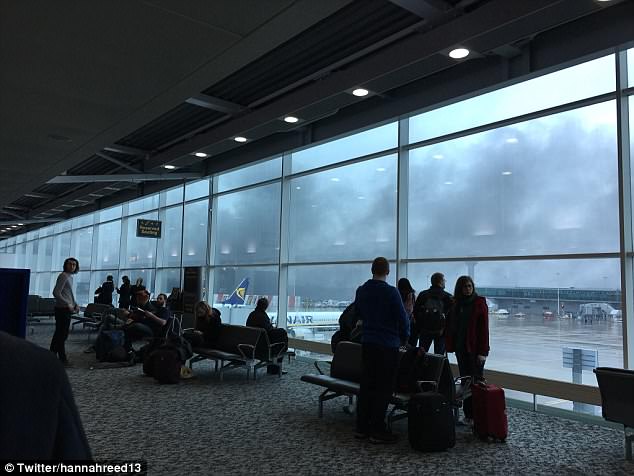 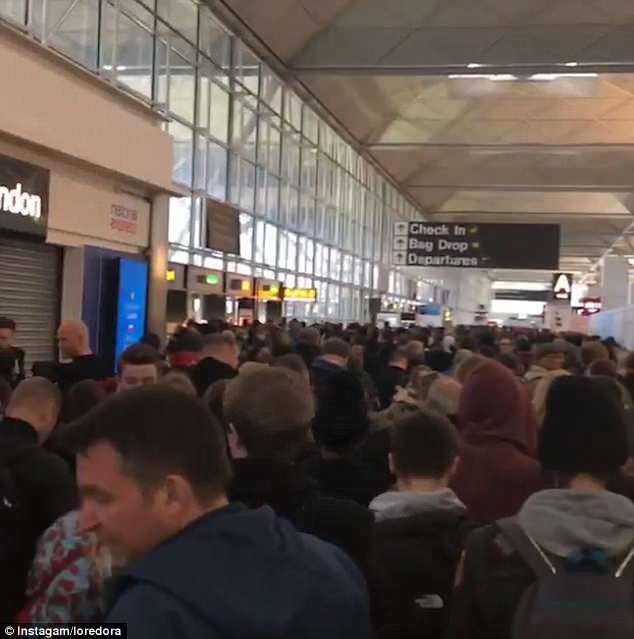 Jan Graversen, who was due to be flying to Copenhagen, said there was ‘gridlock’ in the car park outside, while Aileen Prendergast said she was ‘locked out of the terminal’.

Winnie Agbonlahor said she had been waiting to leave the train station for 25 minutes because of the earlier evacuation, while Zak Johnson said he had been sitting and standing in queues for two hours in the aftermath of the accidental fire, which Stansted Airport said had been caused by an electrical fault.

National Rail also reported disruption on trains to the airport, with some services cancelled on the Stansted Express to London Liverpool Street.

A Stansted spokesperson said: ‘The process was arranged in line with the procedures not only from us but the fire service too.

‘It was a very fluid situation and the first priority was to evacuate people to a safe distance away as it was unknown at that stage what the cause of the fire was.

‘However, after that it meant that passengers were on the wrong side of security.

‘While it was not perfect, in terms of making the priority people’s safety that was achieved and there were no injuries.

‘There was a lot of people there and information was being provided but people in the heat of the moment may not have heard the tannoy announcements while they were looking for specific information about their flights.

‘The airlines had to make their decisions as to whether cancel their flights in what was a difficult situation.’ 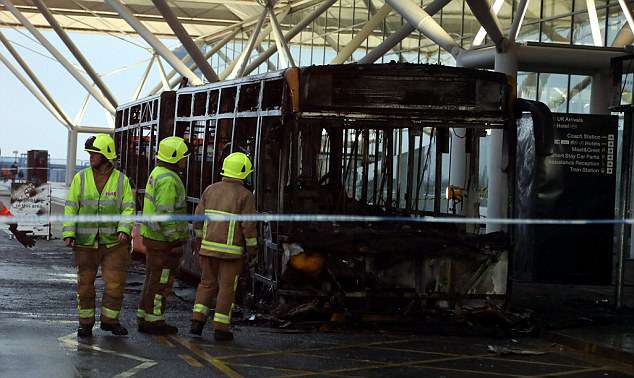 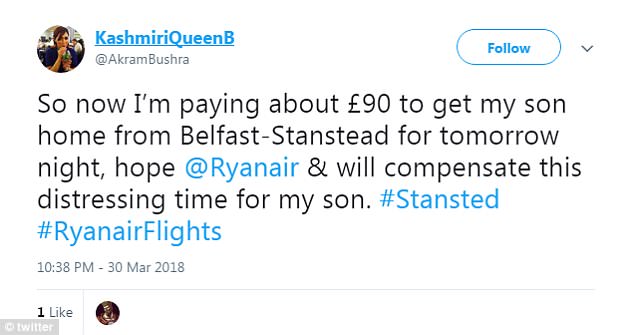 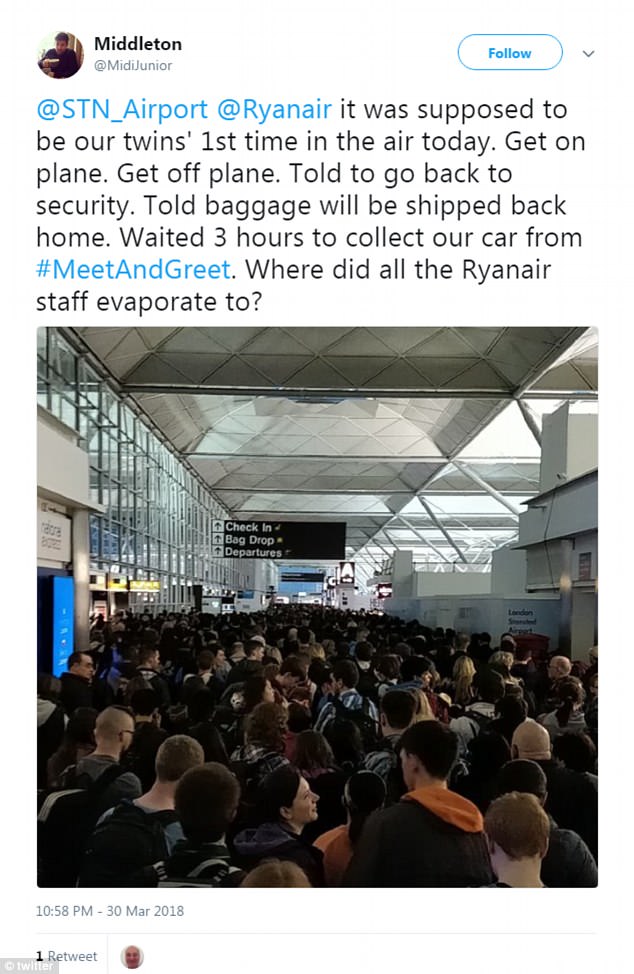 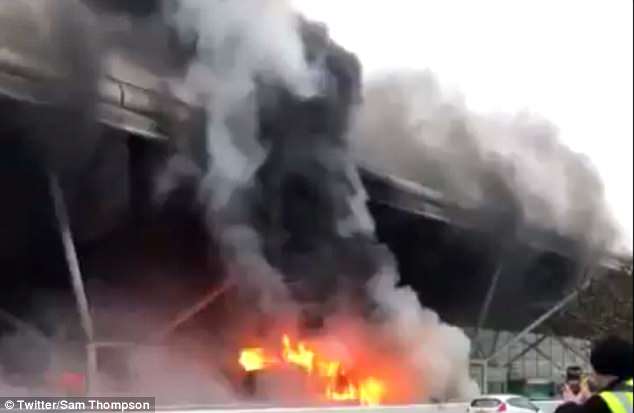 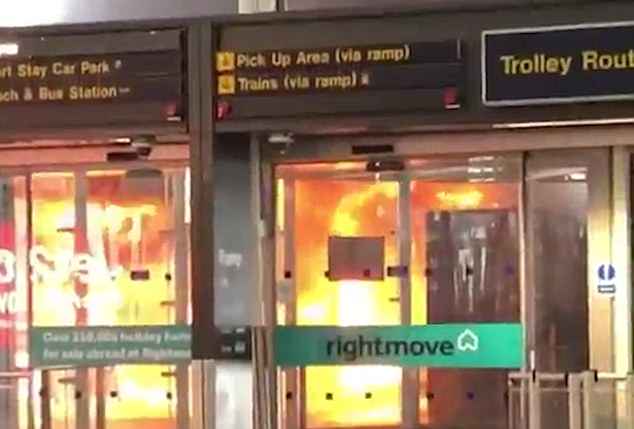 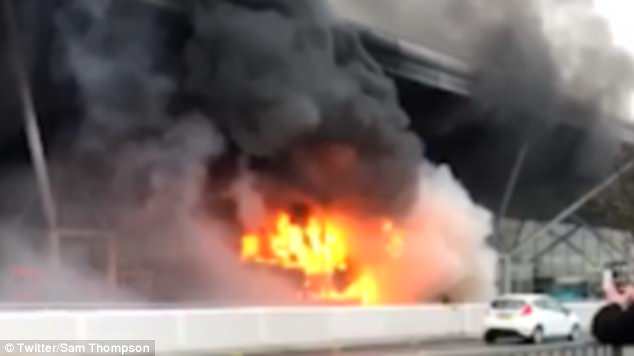 One witness wrote on social media: ‘Smoke billowing across the terminal building at #stansted airport – police diverting traffic away from the terminal’ 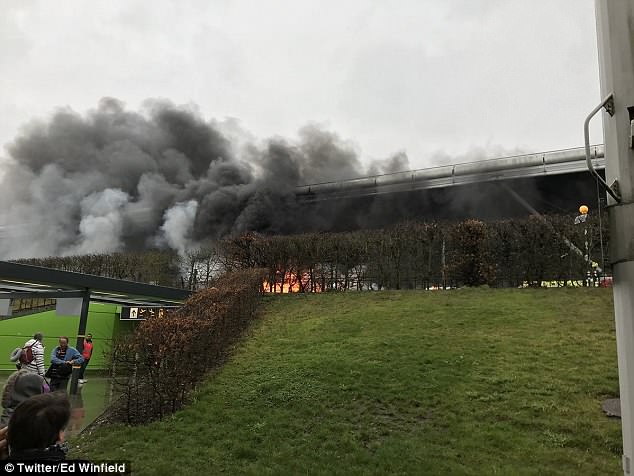 A Stansted spokesperson told MailOnline yesterday: ‘A shuttle bus caught fire on the terminal forecourt. The fire is now out but smoke from the fire went into the terminal building meaning we had to evacuate parts of the terminal.’

There are no reports of any injuries, the airport confirmed. The fire and rescue service said the bus was destroyed and the front of the airport building suffered smoke damage.

The area was immediately sealed off as the airport’s own fire crews and appliances from Essex fire and rescue tackled the blaze.

One witness wrote on social media: ‘Smoke billowing across the terminal building at #stansted airport – police diverting traffic away from the terminal.’

Sharing footage on Twitter, another passenger said it looked like a ‘fireball’ had gone up over the airport, while another user said there were ‘massive flames’ at the scene.

Another video taken at the scene showed a view through the terminal door of the fire raging outside. 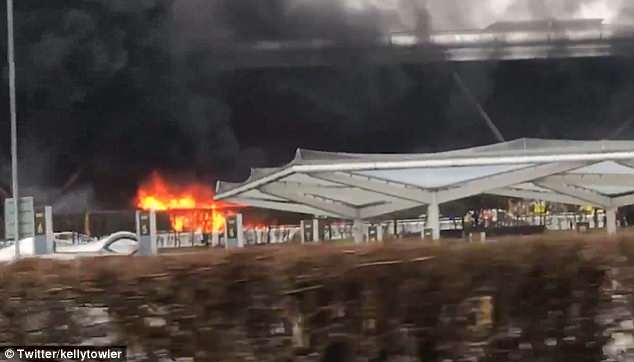 One person said they were stuck at border control and could see the smoke outside.

Julia Buckley said: ‘In arrivals. Saw thick smoke as plane was landing. Can’t see anything from here. Can smell smoke though. But atmosphere is calm’.

A statement from the fire service said: ‘Crews reported on arrival that a bus, positioned outside the terminal entrance, was well alight.

‘Due to the volume of smoke, the terminal was partially evacuated while firefighters extinguished the fire.

‘The fire was extinguished completely by 5.02pm. Firefighters are still at the scene using thermal imaging cameras to ensure there are no remaining hotspots in the area.’

Four fire engines from the Essex Fire Service attended the blaze, with the terminal partially evacuated 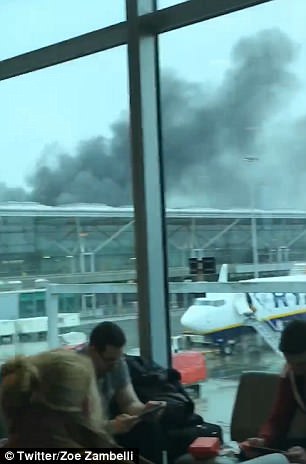 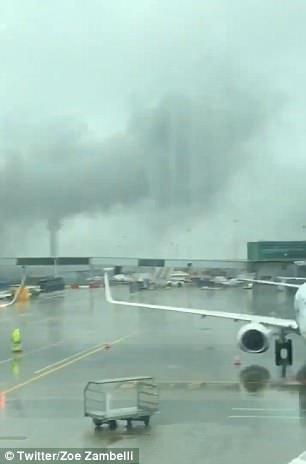 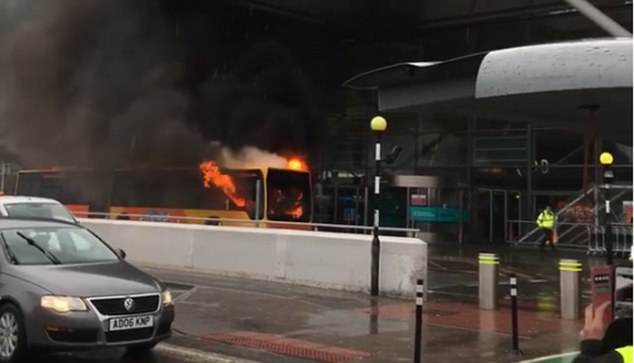 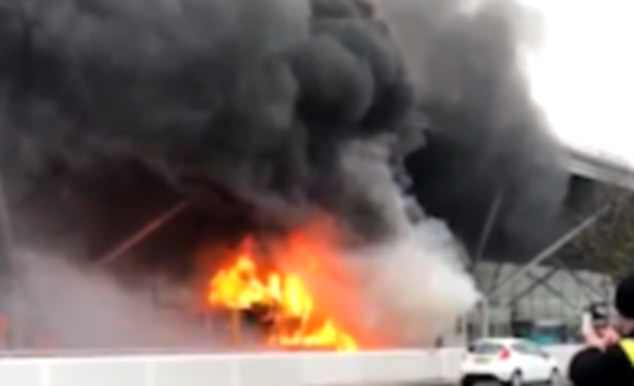 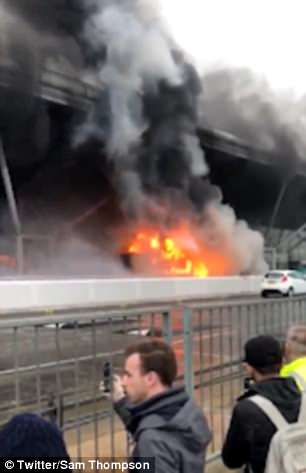 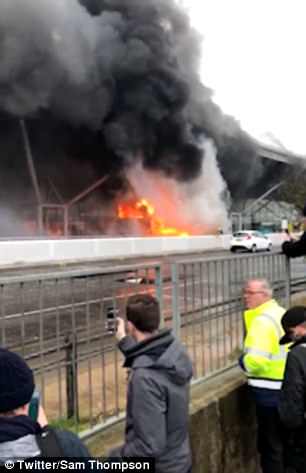 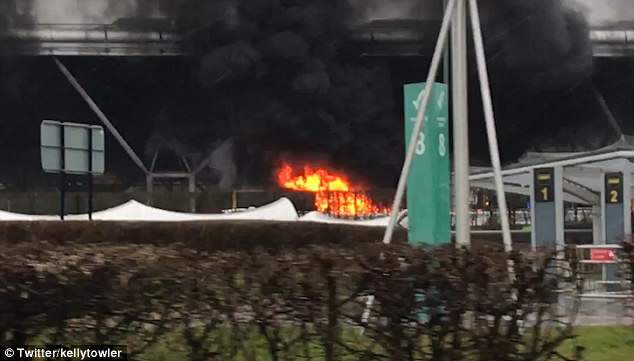