Starbucks has apologized after an Oklahoma police officer was was given a coffee cup with the word ‘pig’ printed on the label while working on Thanksgiving.

The Kiefer police officer stopped at the Starbucks in Glenpool to order five cups of coffee for dispatchers working on Thanksgiving.

But the officer was left disgusted after the coffee label had the word ‘pig’ printed on the side.

The Starbucks cup the officer was served in Glenpool, Oklahoma, with the label ‘PIG’ on the side

Kiefer Police Chief Johnny O’Mara called the manager of the coffee chain who offered to reprint the label if the officer brought the cups back.

However the police chief decided to share a picture of the cup on Facebook yesterday with the caption: ‘So… one of my on-duty officers decides to do something nice for our dispatchers.

‘It’s Thanksgiving Day; our dispatchers are under appreciated as it is. My officer goes to Starbucks to get the dispatchers coffee as a thank you for all they do (especially when they’re working a holiday.)’

He continued: ‘This is what he gets for being nice.

‘What irks me is the absolute and total disrespect for a police officer who, instead of being home with family and enjoying a meal and a football game, is patrolling his little town.’

‘This cup of coffee for a ‘pig’ is just another little flag.

‘It’s another tiny pinprick into the heart of men and women who are asking themselves more often: ‘Why am I doing this?’

He added: ‘Just pour the coffee, please. Are we at a point where a task as simple as pouring an exceptionally overpriced cup of coffee is so complicated that it cannot be accomplished without ‘expressing oneself?’ 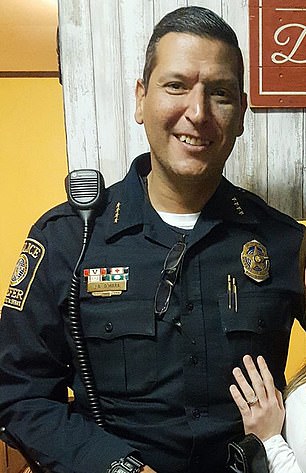 ‘As a side note, I called the store and was told they’d be happy to ‘replace the coffee with a correct label.’ The proverb ‘Fool me once, shame on you. Fool me twice, shame on me’ came to mind.

‘Thank you, first responders, for risking it all this Thanksgiving away from your families.

‘If you’re looking for coffee use a place where you pour your own and you’re certain of what’s in it). Stay safe; go home.’

Jessica Linnet: ‘Oh my gosh!!! That is horrible they did that. So disrespectful. Thank you though for what all you and your officers do for us.’

Linda Dee Rooney-Card added: ‘Thank you and your officers and dispatchers for all you do.’

Starbucks spokesman Jory Mendes told KTUL: ‘This is absolutely unacceptable and we are deeply sorry to the law enforcement officer who experienced this.

‘We have also apologized directly to him and we are working to connect with the police chief as well as to express our remorse.

‘The barista has been suspended pending the outcome of our investigation into this matter.

‘This language is offensive to all law enforcement and is not representative of the deep appreciation we have for police officers who work tirelessly to keep our communities safe.’

The Starbucks employee has reportedly reached out to the officer and apologized claiming it was a joke.