While most of us are adding on the extra pounds while in lockdown, a Starbucks barista who consumed hundreds of calories in coffee each shift revealed she has lost almost 2st since being furloughed.

Ali Summers, 30, from Essex, would normally drink three coffees a day – either Flat Whites or Skinny Vanilla Lattes, which contain up to 220 calories each – as well as a breakfast of the chain’s yogurt and granola pots (250 calories) or a Hickory Smoked Bacon Sandwich (308 calories).

But since stopping work due to the coronavirus lockdown, Ali has lost 1st 9lb, bringing her total weight loss in the last four months to 5st. 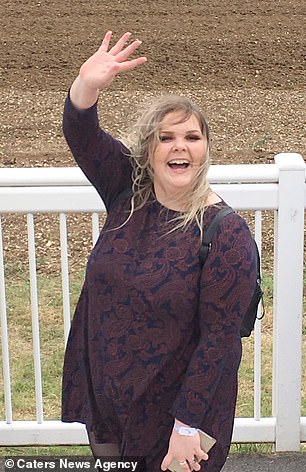 Starbucks barista Ali Summers, 30, from Essex, who was addicted to coffee, has lost a staggering five stone since being furloughed 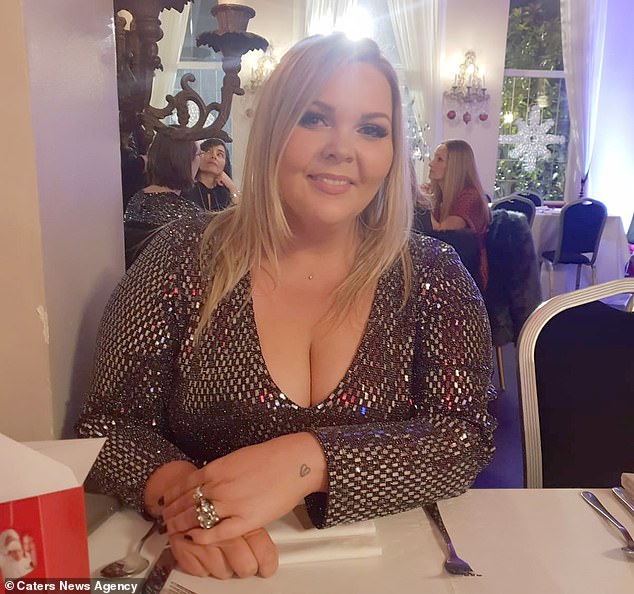 Ali is also three dress sizes smaller and can now fit into a size 14 – and admits cutting out the snacks and drinks she used to have at work has made a huge difference.

The mother-of-one started on the 1:1 Diet Plan by Cambridge Weight Plan in January and now consumes 600 calories a day, rather than the 2,500 she was having before.

Before starting her diet, Ali would drink three coffees from Starbucks a day as well as a bacon roll and a granola yoghurt pot with banana.

Here, the calories found in her usual selections are revealed…

However she still faced the obstacle of Starbucks breakfasts, snacks and drinks, on which employees enjoy a 30 per cent discount. She cut them out before lockdown but being furloughed has now removed temptation completely.

Ali said: ‘The hardest obstacle when I was trying to lose weight was the coffee that I would normally have at work. Every time I worked a shift, I would have at least two-three coffees per day. One at the start of my shift, one on my break and sometimes just before I went home.

‘I used to get to work early so after I dropped my little girl off at school, I would have breakfast there as well.’

But Ali has now ditched the sweet drinks, explaining:  ‘I have completely cut out Starbucks but I do miss having a good coffee. When I’m back at work, if my plan allows me too, I can always treat myself again.

‘I’m shocked by how much weight I’ve lost. When I started the plan, I was so happy, had so much more energy and that feeling was enough to make me carry on. I got such a buzz from feeling good that I never even thought about food’.

Ali began her diet on January 8 2020 when she was 18st 6lbs, which was due to a toxic relationship leading to ‘a lot of weight gain’. 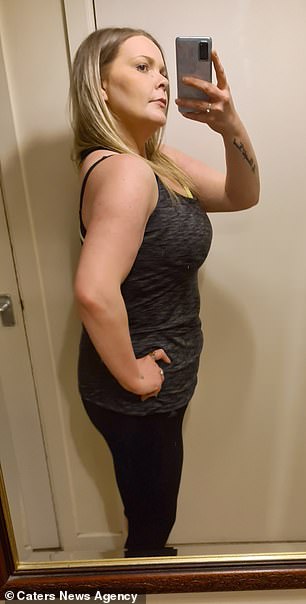 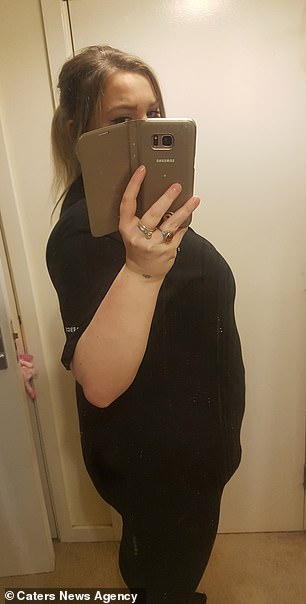 Yet since switching up her diet earlier this year, Ali (pictured after her diet, left, and before it, right) has gone on to lose five stone, dropping from 18st 6lbs to 13st 5lbs in four months 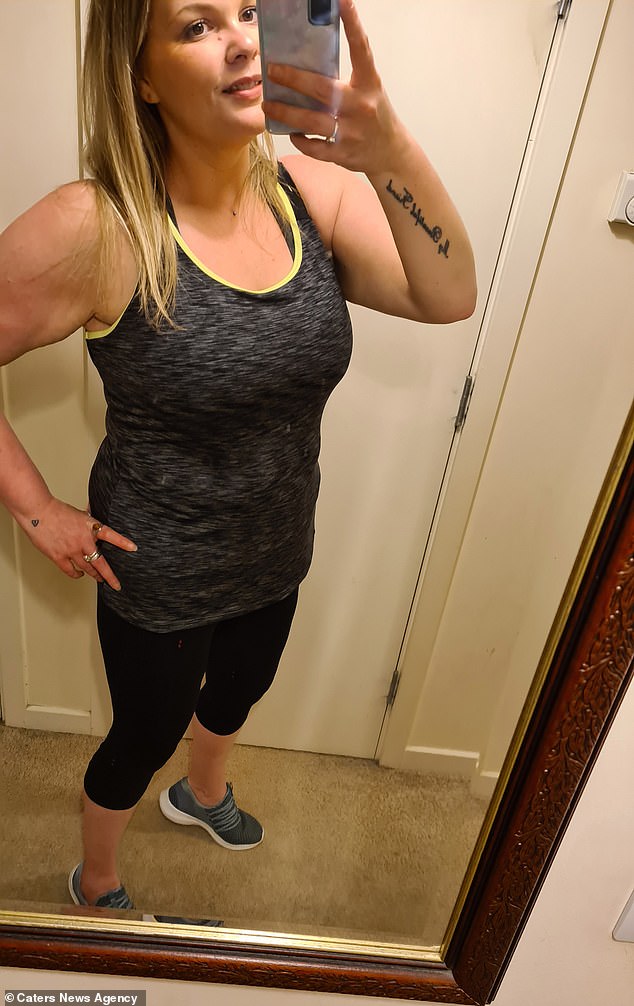 She recalled: ‘I had been out of that relationship for a year and I felt this huge liberation so I spent the whole of last year enjoying my time and not caring as much.

‘But it wasn’t until later in the year I saw some pictures and realised that I needed to get a grip of myself or I’m going to spiral out of control.

‘I gained weight so gradually that I never really saw it and after having a blow out, I really looked at myself and decided it was time for a change’.

Lunch: Toastie with crisps and fruit 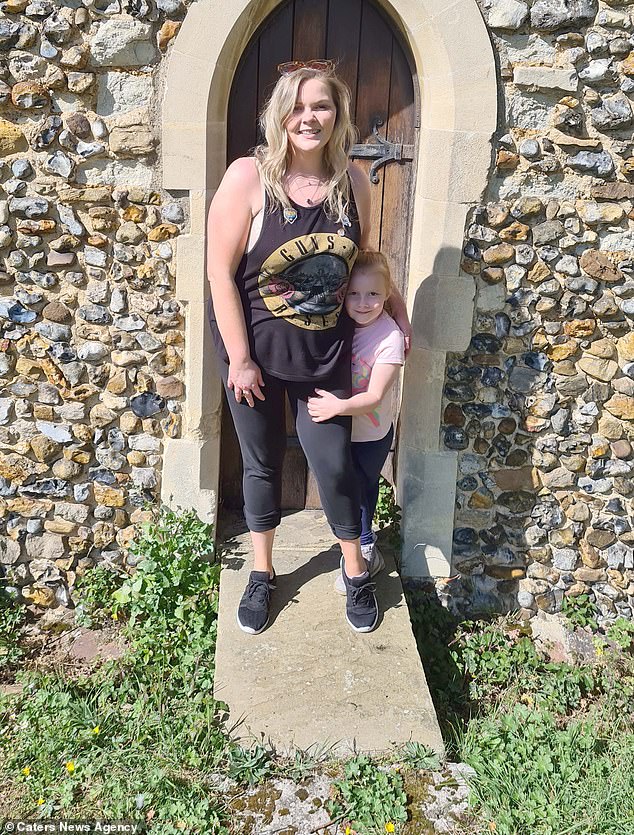 Ali (pictured recently with her daughter) follows the 1:1 Diet Plan by Cambridge Weight Plan – which sees the barista completely cut out her usual coffees and consume just 600 calories compared to the 2,500 she was enjoying before. 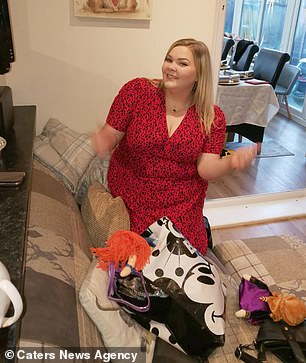 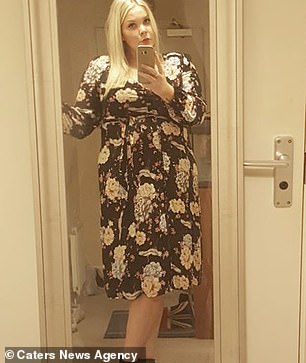 Ali is on The 1:1 Diet Plan by Cambridge Weight Plan and is only currently allowed three products a day which equate to 600 calories.

She said: ‘I would consume more than 2500 calories a day before and now I’m consuming just over 600 calories a day. I’m not where I want to be and would still like to lose a few more stone.

‘The weight comes off really quickly with this plan and I’m seeing this as a huge lifestyle change. I’ve lost the weight rapidly and am considering moving up a step and introducing proteins and vegetables into my diet and having a higher calories intake’.

Ali had been buying size 20 dresses but can now fit into a size 14, adding: ‘I bought a size 16 dress and it was swimming on me. That in itself was such a shock; I didn’t realise how much weight I had lost. I’m excited to be able to go clothes shopping after lockdown’.