A Starbucks customer received a life-saving kidney transplant after his barista’s husband offered to donate.

Vince Villano, 41, of DuPont, Washington, was diagnosed with a genetic kidney disease at age 30.

Two years ago, doctors told the former Army sergeant that his disease had progressed to an advanced stage, leaving him on dialysis hours a day.

Vince’s condition was deteriorating to such an extent that he was told he would die unless he received a kidney transplant.

One day in January, when he was feeling down, he told his barista Nicole McNeil about his rapidly declining health – who went home that night and told her husband Justin.

Right away, Justin offered to get tested. After a year, he was found to be a perfect match for Vince and donated his kidney to him yesterday.

Vince Villano, 41, of DuPont, Washington (right) was given a second chance at life after he received a kidney from Justin McNeil (left), the husband of his Starbucks barista, Nicole 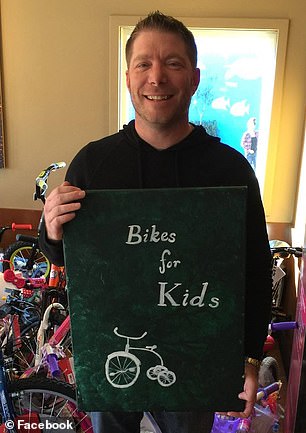 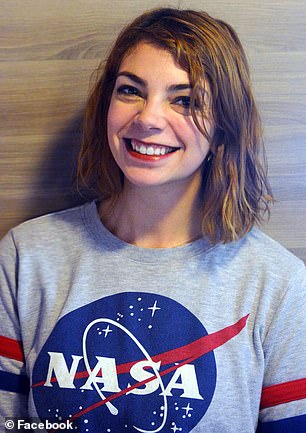 Vince (left) was a regular at the Starbucks where Nicole (right) works in DuPont. In January 2017, noticing he seemed upset, Nicole asked him to talk about what was bothering him

Nicole, 35, told DailyMail.com that Vince had been visiting the Starbucks in DuPont before she started working there four years ago.

She knew his regular order – a thirty-ounce vanilla cold brew with extra vanilla – but not much else.

‘Even when he seemed happy, he always looked a bit glum and wanted to just get his coffee and go,’ Nicole said.

However, one day in January 2017, Vince seemed to be sadder than usual, so Nicole, who was coming off the end of her shift, asked what was bothering him.

‘When I asked him, he said: “It would take too long to tell you.” I said: “I actually do have the time today”.’

Nicole clocked off and they sat at a table to talk.

Vince told her that he had been diagnosed with polycystic kidney disease (PKD) when he was 30 years old.

PKD is a genetic disorder that causes fluid-filled cysts to grow in the kidneys. These cysts can change the shape of the kidneys, which reduces kidney function and potentially leads to kidney failure.

Every generation of Vince’s family had PKD, going back to his great-grandmother who died from the disease.

His kidneys were now swollen to the size of footballs and starting to stick to other organs.

According to the National Institute of Diabetes and Digestive and Kidney Diseases, 661,000 Americans are suffering from kidney failure.

The father-of-two was put on the list for a kidney transplant, but was told it could be between four to five years before a match was found. 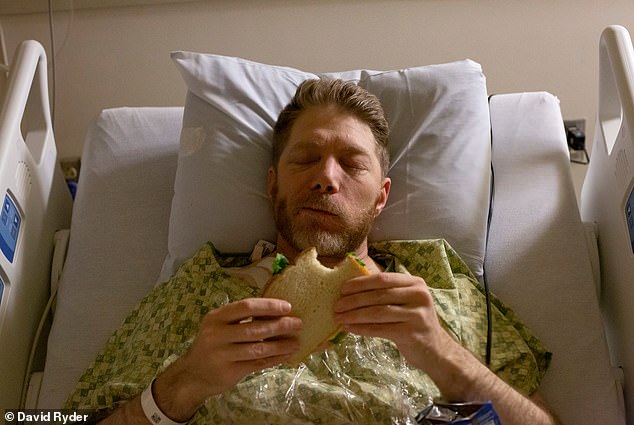 During the conversation, Vince revealed he was diagnosed with polycystic kidney disease, a genetic condition that could lead to kidney failure, at age 30 and would die without a transplant. Pictured: Vince eats a sandwich while receiving dialysis at St Joseph Medical Center in Tacoma, Washington, on December 13, 2018 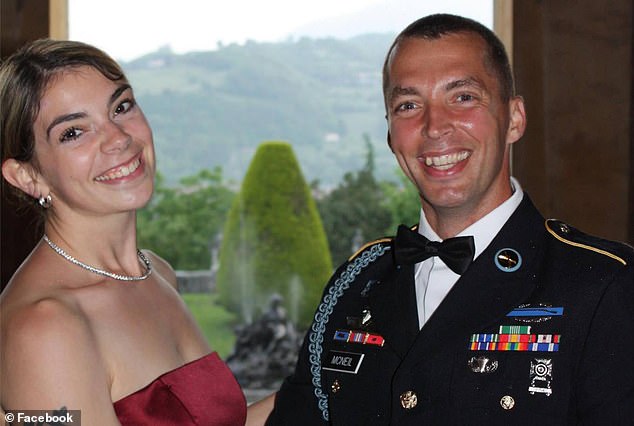 Nicole (left) told her husband Justin (right) about the conversation she had with Vince when she got home. Justin offered that night to get tested to determine if he was a match 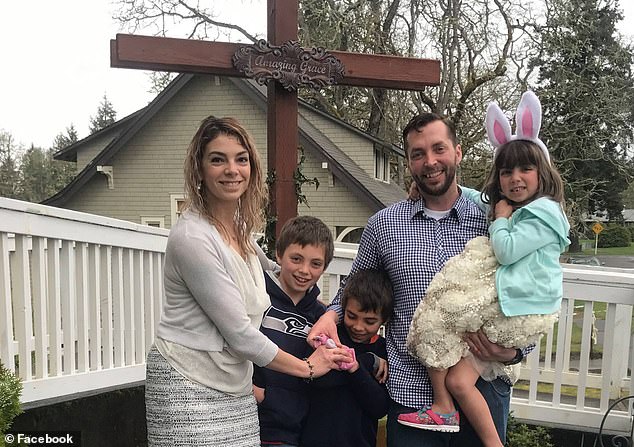 After a year of tests, Justin’s kidney was declared a match for Vince. Pictured: Nicole and Justin with their three children

Later that night, Nicole and her husband Justin, 36, were running through what they’d done that day and she told him about the conversation she had with Vince.

‘I invited [Vince] to my birthday party and then he started coming over for parties on the holidays and then he and Justin started hanging out on their own,’ she said.

Vince and Justin discovered they had a great deal in common: they were both Army veterans who enjoyed camping and fishing.

Justin told Vince his plan to get tested. Vince seemed skeptical of the idea that Justin would be a match, but agreed.

After a year of tests, Justin’s kidney was declared a match for Vince. 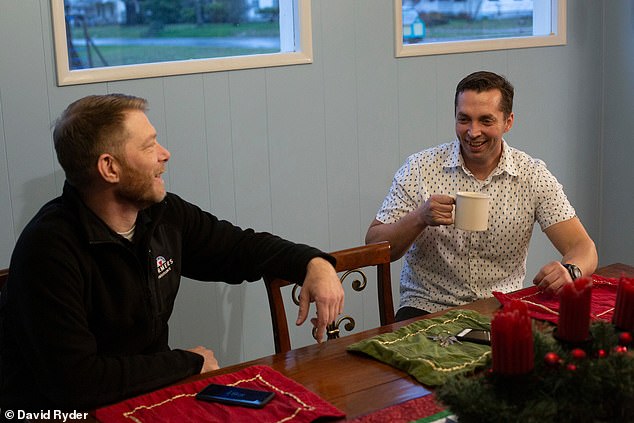 The transplant was scheduled at the University of Washington Medical Center in Seattle for December 26, the day after Christmas and Justin 36th birthday. Pictured: Vince, left, and Justin chat at the McNeil home in DuPont on December 11, 2018 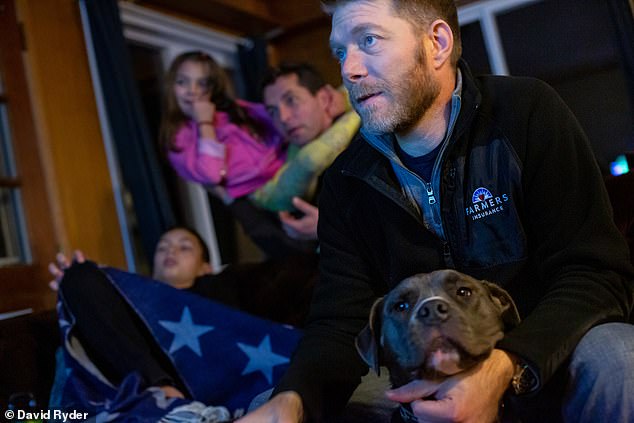 By this time, Vince’s kidneys were functioning at just four percent. Nicole says the operation was a success and that both men are recovering well. Pictured: Vince pets the McNeils’ dog Rowlf while watching football on December 16, 2018 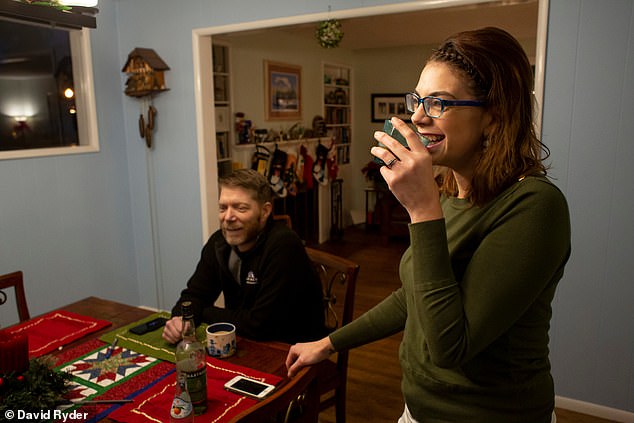 Nicole says Justin doesn’t want to inspire others but rather wants to encourage them to help others. Pictured: Vince, left, and Nicole spend time together at the McNeil home on December 16, 2018

‘All of sudden, it was like this is not just a pipe dream anymore, this is actually happening,’ Nicole.

The transplant was scheduled at the University of Washington Medical Center in Seattle for December 26, the day after Christmas and Justin 36th birthday.

By this time, Vince’s kidneys were functioning at just four percent.

Nicole says the operation was a success that both men are doing well. They’ve just started getting up and walking around the hospital floor.

Justin will be in the hospital until Saturday, December 29, and will require rest at home for two weeks before he goes back to work in the Army National Guard.

Vince will likely remain in the hospital until New Year’s Eve. He will need to be on immunosuppressant drugs to prevent rejection of his new organ, but doctors say the kidney should keep him alive for at least 20 more years.

Nicole says that while her husband is glad he was able to offer his kidney, he doesn’t view his actions as heroic.

‘Justin doesn’t want any glory. We’re giving all the glory to the Lord,’ she said.

‘He doesn’t want to inspire anyone but we just want it to be an encouragement to others to seek out those opportunities to help people. Whether it’s donating organs or blood, they’re so many ways to help.’