High street chain Starbucks has been blasted for selling a hot chocolate for children that contains five teaspoons of sugar.

The hot beverage also could be detrimental for seven to 10 year olds, who are meant to have no more than 24g of sugar each day, under Government guidelines.

It comes just days after Starbucks, which has around 350 stores in the UK, promised to slash the use of sugar and change the face of eating out. 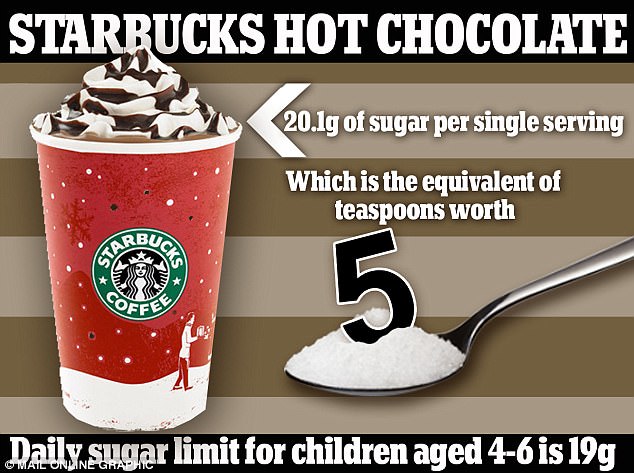 The hot beverage also could be detrimental for seven to 10 year olds, who are meant to have no more than 24g of sugar each day, under Government guidelines

The Seattle-founded firm was one of dozens to pledge to cut sugar in their food and drink by 20 per cent in the next two years.

The move is designed to meet targets set by watchdogs at Public Health England (PHE) as part of the Childhood Obesity Plan.

The new revelation, made by The Sun, suggests more needs to be done to combat sugar-laden products, especially those aimed at children.

Nutritional information on the firm’s website doesn’t show any information for the ‘Kids’ hot chocolate.

However, when visiting the UK version of the firm’s website, it is listed as a possible option underneath the ‘Classic Hot Chocolate’ range.

It is the same size as a ‘Short’ and also contains semi-skimmed milk and two pumps of Mocha sauce.

HOW MUCH SUGAR CAN WE HAVE?

The Government recommends that free sugars – sugars added to food or drinks, and sugars found naturally in honey, syrups, and unsweetened fruit and vegetable juices, smoothies and purées – shouldn’t make up more than 5 per cent of the energy (calories) you get from food and drink each day.

Extras such as a marshmallow or flake can be added to the drink, which is already 215 calories, the newspaper reports.

Campaigners have blasted the firm for targeting children with the sugar-laden treat, which is popular on a cold winter’s day.

A spokesman for the British Dental Association said: ‘Tooth decay is the number one reason for hospital admissions among young children.

‘We urgently require industry to play its role in weaning Britain off its addiction to sugar.’

A Starbucks spokesman said: ‘We offer ways to reduce sugar, including no whipped cream.’

Official statistics released last year showed that children eat the equivalent of 20 chocolate chip cookies’ worth of sugar every day.

The vast majority of the sugar children eat is hidden in common foods such as cereals and soft drinks, making it hard for parents to control what they consume.

The Government agency’s guidance came as it warned that the average child eats almost 400 biscuits each year – which could make them fat.

HIGH STREET CHAINS TO SLASH THE USE OF SUGAR

High street chains, including Costa, McDonald’s and Greggs, promised last week to slash the use of sugar and change the face of eating out.

The firms signed up to a code of practice including a pledge to cut sugar in their food and drink by 20 per cent by 2020 amid Government pressure.

This will mean a change to the recipes of many products and the addition of new low sugar items to menus up and down the country.

The move is designed to meet targets set by watchdogs at Public Health England (PHE) as part of the Childhood Obesity Plan.

These are some of the biggest names on the high street, however a number of brands, including the likes of KFC and Burger King, are not part of the initiative and will take measures of their own.

The Code, drawn up by a working group from all the participating companies, includes a series of commitments around cutting sugar and responsible marketing to children.