Starbucks appears to have found the perfect way to give its baristas a scare this Halloween: It’s selling another very limited-edition Frappuccino inspired by a supernatural creature.

After the success of the Unicorn Frappuccino earlier this year, the chain announced today that it is selling a Zombie Frappuccino for a limited time in the US and Canada, starting today and ending October 31.

And the reviews are quickly rolling in — though they’re hardly unanimous. While some have called the beverage ‘disgusting’, others have named it as a new favorite. 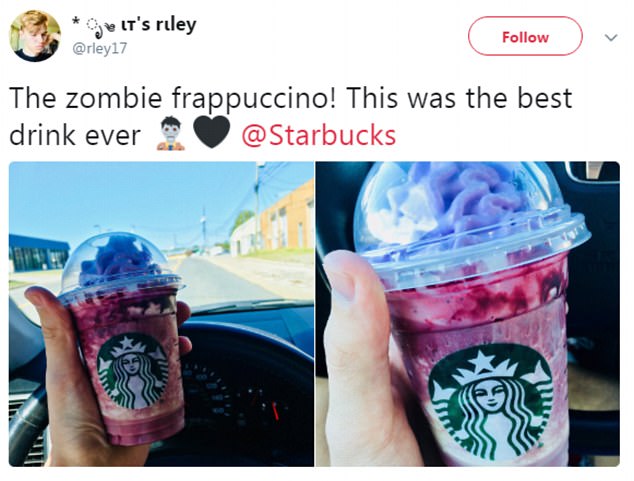 Get it by Halloween: The drink is available in the US and Canada through October 31 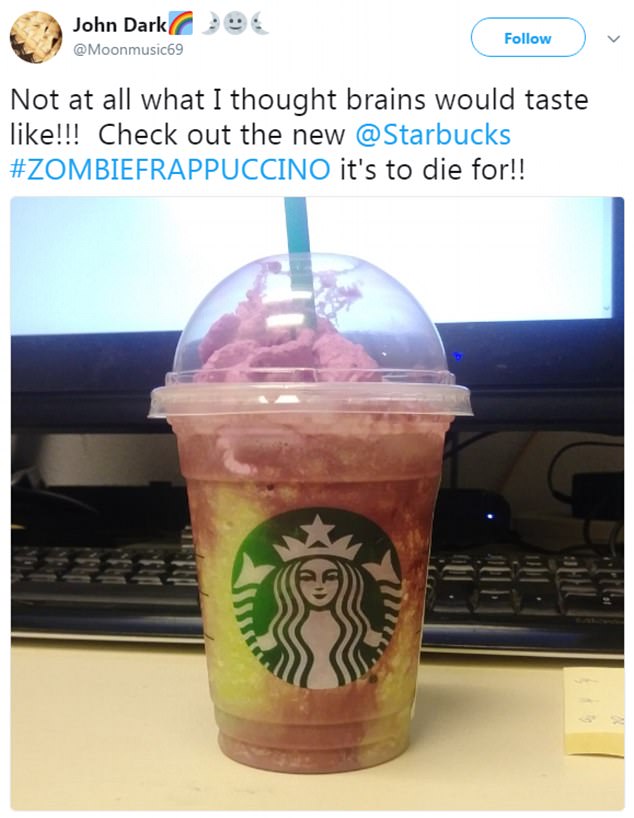 Instant fan: So far, several customers have taken to social media to share positive thoughts about the concoction

Sweet: It doesn’t have any espresso or coffee and is made with a Crème Frappuccino base 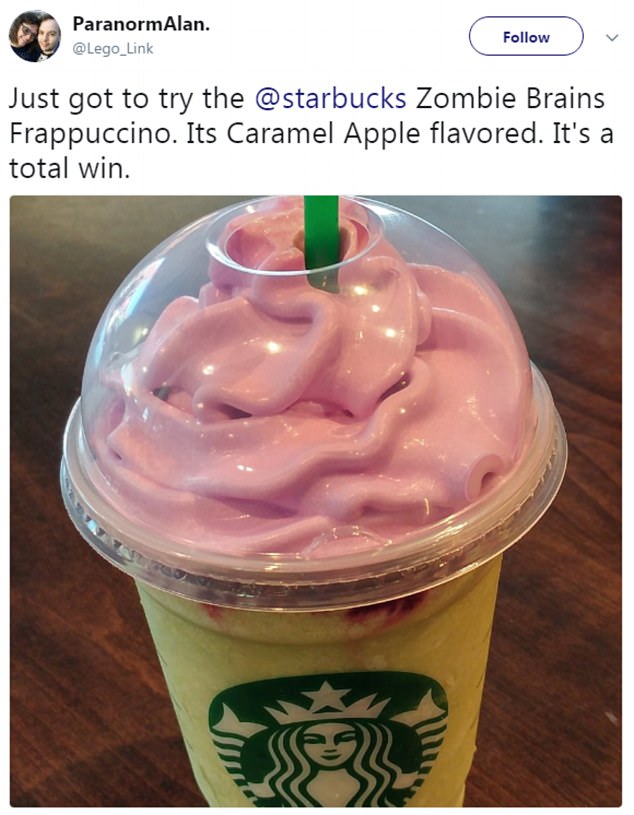 Creative: It has a red mocha ‘blood’ drizzle and is topped with pink whipped cream ‘brains’

Mixed reviews: Not everyone is in love with the drink, and some customers have called it ‘gross’

Rumors of the Zombie drink began swirling online in the middle of the month, when some baristas posted information about the top-secret menu item online.

Starbucks confirmed the news this morning as the drinks hit stores. Made with a Crème Frappuccino base, it has no espresso or coffee.

It mixes tart apple and caramel flavors, and is topped with a red mocha drizzle — to look like blood — and pink whipped cream ‘brains’.

So far, some customers are seriously impressed and have happily shared images of their purchases on social media.

‘Just got to try the @starbucks Zombie Brains Frappuccino. Its Caramel Apple flavored. It’s a total win,’ wrote one.

‘I think the Zombie frappuccino is good and you should get it and add espresso and extra brains,’ said another.

Yet another said the concoction was ‘to die for’, and a very enthusiastic fan wrote, ‘The zombie frappuccino! This was the best drink ever.’ 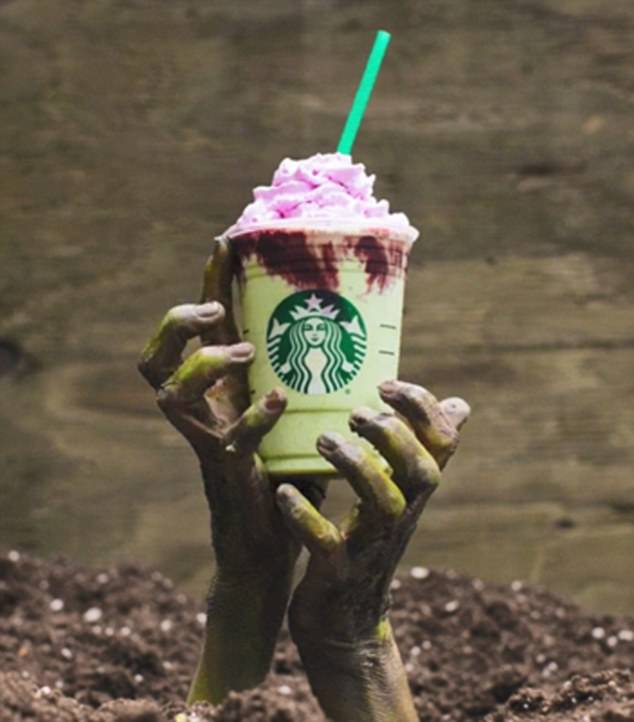 Uh-oh: Quite a few baristas are unhappy about the menu addition

Flashback: Stores were hectic when the Unicorn Frappuccino was released

Yikes: Some anticipated that the crowds would be similar 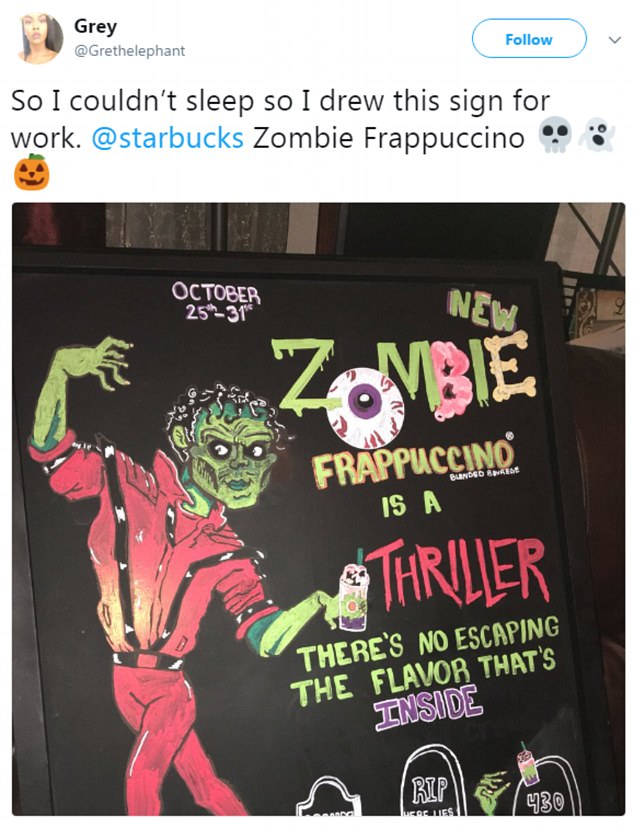 Thriller! However, other baristas seemed happy for the opportunity to be artistic with chalkboards

‘I usually LOVE mixes of sour fruit and sweeter flavors like caramel, but I only have one thing to say about this: I think a real zombie would taste better. On behalf of zombies everywhere, I’m offended,‘ said US Femail Reporter Clemence Michallon.

US Trainee Reporter Marlene Lenthang, meanwhile, described the Zombie Frappuccino as ‘a horrible clash of sour fruit and chocolate.’

US Femail Editor Charlie Lankston — who did not care for the Unicorn Frappuccino — would take that drink over the Zombie one any day.

‘Of all the limited edition Frappuccinos I’ve tried, I’m afraid this one was the worst,’ she said. ‘The sickly-sweet flavor is pretty unidentifiable to me and was just overpoweringly sugary. I’m not a huge fan of caramel apples either though, so perhaps that’s my problem?’

Only one taste tester was game to take more than a few sips — but she didn’t get carried away.

‘It tastes like toffee apples,’ said US Assistant Editor Katie Davies. ‘Bit odd for a drink, but the flavor isn’t horrible. Just taking a taste, I thought it wasn’t bad. But I definitely wouldn’t drink the whole thing.

Not everyone is in love with the drink, though. One Twitter user said a ‘trusted source’ told her it was ‘terrible’, while a female customer rated it a ‘-4 million/10’ and said it ‘smells like sweaty socks and tastes gross’.

Even the baristas have mixed reactions. While a handful have shared their sign-painting handiwork, featuring fun drawings of zombies and other spooky Halloween references, most are already waiting for the limited run to run out.

‘Starbucks launches Zombie Frappuccino tomorrow and I just wanna know why they hate their baristas,’ one wrote on Wednesday.

‘Just made the first zombie frappuccino. I can’t wait to hate my job here soon,’ said another. 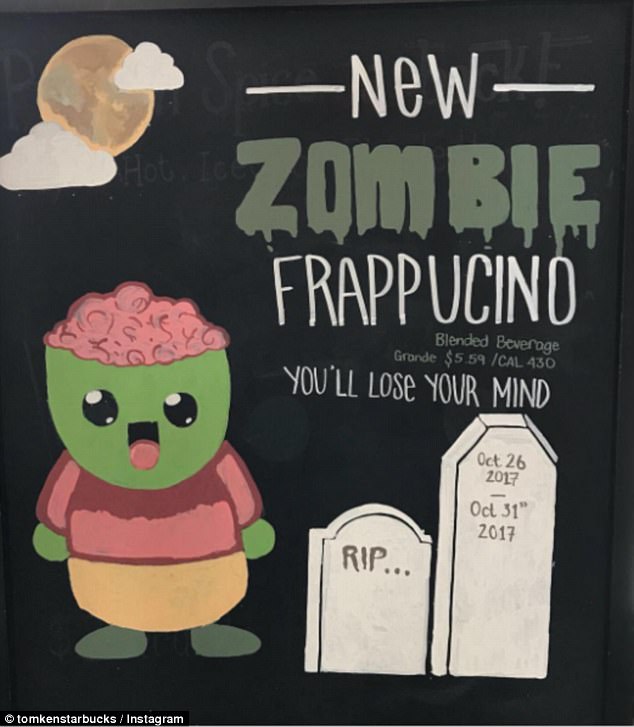 We’re zombies before we’d had caffeine, too! Baristas have been sharing images of their store chalkboards online since earlier this month 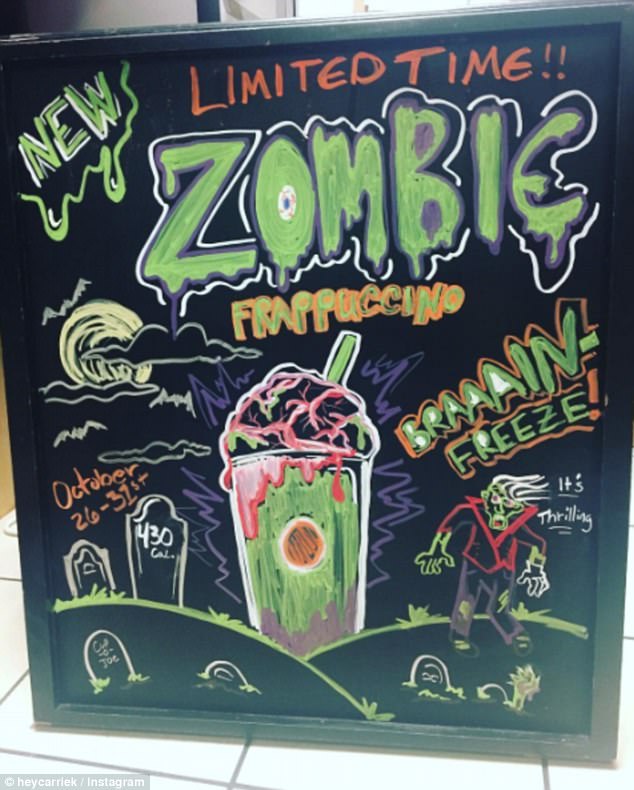 For those who love brains: Many seemed to have fun with the Halloween theme 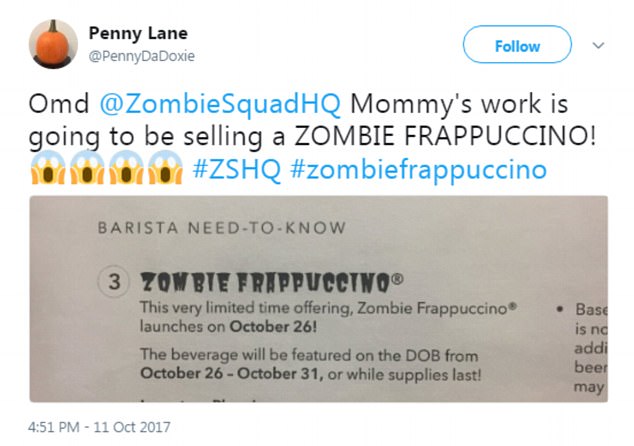 Creepy: Details of the drink were leaked before Starbucks’ announcement

Oh no, not again! Some baristas were dreading the release

When news of the drink first hit the internet earlier this month, several baristas took to Twitter to share their dread.

‘The Zombie Frappuccino will simply be the end of me. #baristaproblems,’ wrote one employee.

‘Btw Starbucks is rolling out a Zombie Frappuccino for Halloween it’ll only be for like a couple days,’ wrote another, ‘and no I won’t make you one.’

Other baristas seemed to be wary of the launch, anticipating hectic scenes like the ones made by the Unicorn Frappuccino.

However, employees who have been at Starbucks for years likely remember that this is not the first special Halloween drink it has introduced.

Last year and in 2015, they had a vampire-themed ‘Frappula Frappuccino,’ meant to invoke Dracula, which was made with white chocolate mocha sauce, milk, and strawberry puree. 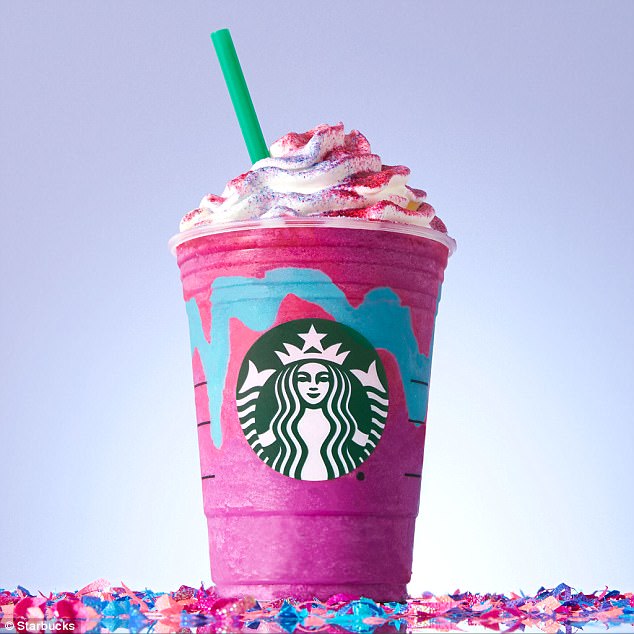 Betting on it: The Unicorn Frappuccino that came out this spring was hugely popular 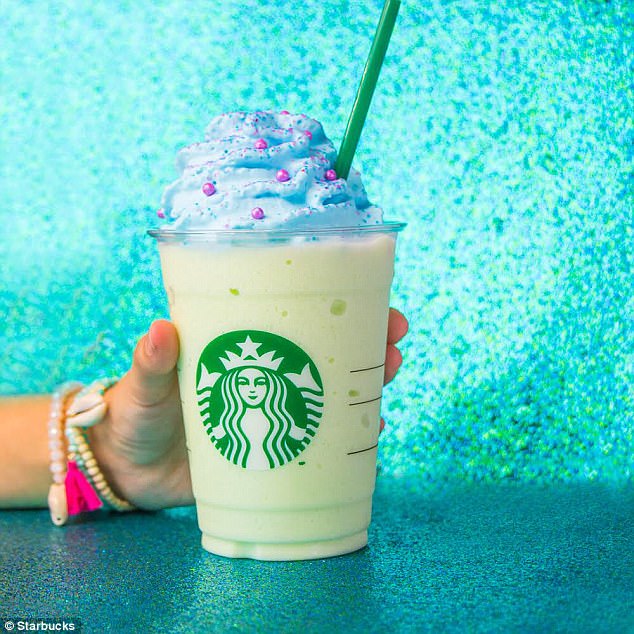 Magical additions: The chain also put out a Mermaid Frappuccino in Mexico 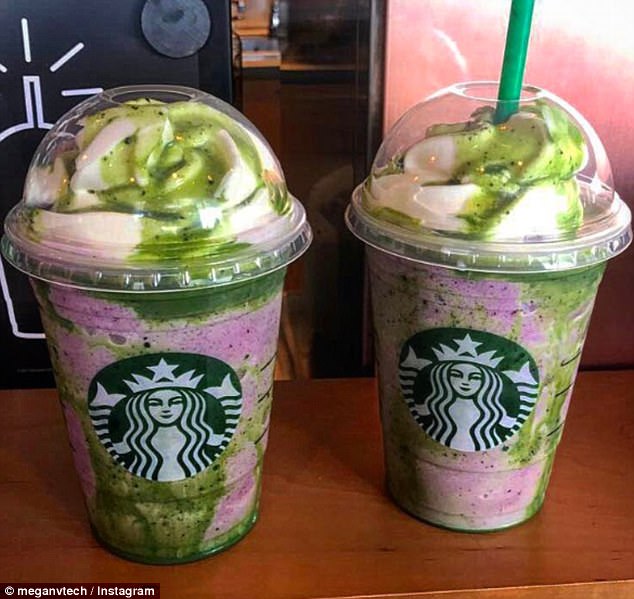 Breathing fire: Some secret menu fans have been ordering Dragon Frappuccinos as well

In 2014 there was also the Franken Frappuccino, a Green Tea Frappuccino made with peppermint syrup, chocolate sauce, and java chips.

The Zombie Frappuccino is be Starbucks’ second drink inspired by a mythical or paranormal creature in the US this year, though the chain did launch a Mermaid Frappuccino in Mexico this summer. It was also made with a Crème Frappuccino base and mixed with melon, a ‘magical flavor from the sea,’ and blue and pink sprinkles.

There have also been a few secret menu items devised by fans and baristas, including a Dragon Frappuccino made with a Green Tea Frappuccino base, vanilla bean powder, berry syrup, whipped cream, and purple sprinkles.

Starbuckssecretmenu.net, a compendium of secret menu items that can be ordered at Starbucks, also lists recipes for a Narwhal Frappuccino and a Lucky Leprechaun Frappuccino.