Justin Thomas ‘sick to my stomach’, Bryson DeChambeau ‘heartbroken and shocked’, while Gareth Bale sends his ‘thoughts and prayers’ – stars of the sporting world left stunned at the news of Tiger Woods’ car crash

Sport stars from around the world have shown their support for golf great Tiger Woods after his car crash earlier today.

Woods is undergoing surgery for non life- threatening injuries that include a compound fracture and a shattered ankle after crashing his car while on his way to an L.A. golf course to film for GolfTV on Tuesday.

The 45-year-old golfer was driving alone near Rancho Palos Verdes when his Genesis GV80 flipped over at 7.12am. 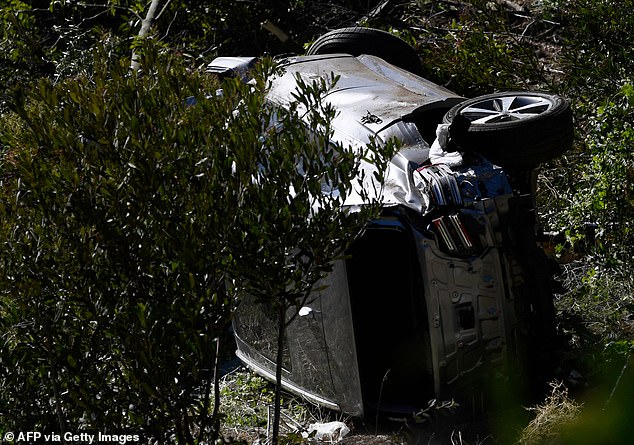 World No1 Justin Thomas said that he was ‘sick to his stomach after hearing the news of the accident.

He tweeted: ‘Sick to my stomach right now. Praying for @tigerwoods and hoping for an amazing recovery. Thinking about his entire family and team, as all of us are sending our best wishes. We know TW is a fighter. Get well soon’

Bryson DeChamberau, currently ranked 10th in the PGA standings, tweeted: ‘Heartbroken and shocked to hear about @tigerwoods accident today. My thoughts and prayers are with him for a full recovery.’

Justin Rose tweeted: ‘Just seen the awful news. We know how tough you are, we’ve seen it a hundred times. Hoping and praying you’re ok my friend.’

Golfer Ian Poulter also showed his support for Woods, tweeting: ‘Thoughts are with @tigerwoods and others involved, wishing a speedy recovery and I hope the injuries are not bad.’

Tottenham star Gareth Bale, who is well known for his love of golf, tweeted: ‘Sending my thoughts and prayers to @tigerwoods. Get well soon champ’

Firefighters had to use a device known as the ‘jaws of life’ to break open the car and rescue Woods.

He was then taken to an unspecified L.A. hospital where he is now undergoing surgery to correct ‘multiple injuries’ on his legs, his agent Mark Steinberg said in a statement shortly after the crash.

‘Tiger Woods was in a single-car accident this morning in California where he suffered multiple leg injuries.

‘He is currently in surgery and we thank you for your privacy and support,’ Steinberg said.