Celebrities flooded social media on Tuesday as they reacted to the news of Derek Chauvin being found guilty on all three charges of murder and manslaughter in death of George Floyd.

Whoopi Goldberg, Kerry Washington, Chris Evans and Mariah Carey were just some of the stars who were first to share their thoughts on Twitter, seconds after the jury in Minneapolis returned its verdict following just 10 and a half hours of deliberation.

Scandal actress Washington, 44, tweeted: ‘A guilty #verdict. But this fight for justice is not over. We have a lot of work to do. There is more fight ahead of us. But RIGHT NOW please take CARE of yourself. And let’s take care of each other. Prayers and love to the family of #GeorgeFloyd.’

Stars react: Whoopi Goldberg, Kerry Washington and more stars react as Derek Chauvin is found guilty on ALL three charges of murder and manslaughter in death of George Floyd 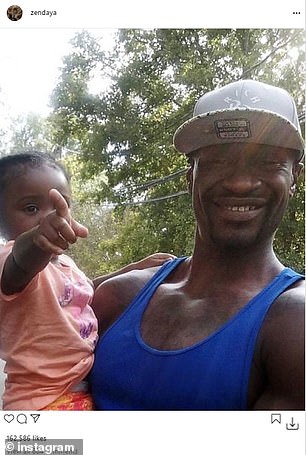 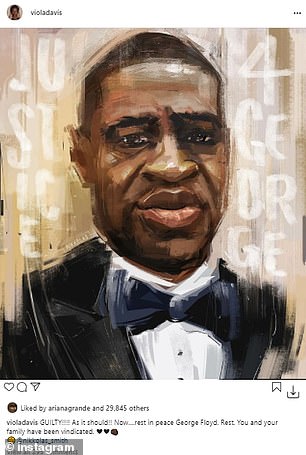 Chauvin, 45, has been found guilty of second-degree unintentional murder, third-degree murder and second-degree manslaughter in the death of George Floyd, and now faces 75 years in prison.

As the verdict was read out Chauvin looked on silently in the Hennepin County courtroom where jurors spent three weeks listening to testimony about the day Floyd died under the weight of the 45-year-old cop’s knee during an arrest on May 25, 2020.

Cheers rose from the crowds that had gathered outside the courthouse and down at the intersection of 38th and Chicago now known as George Floyd Square. 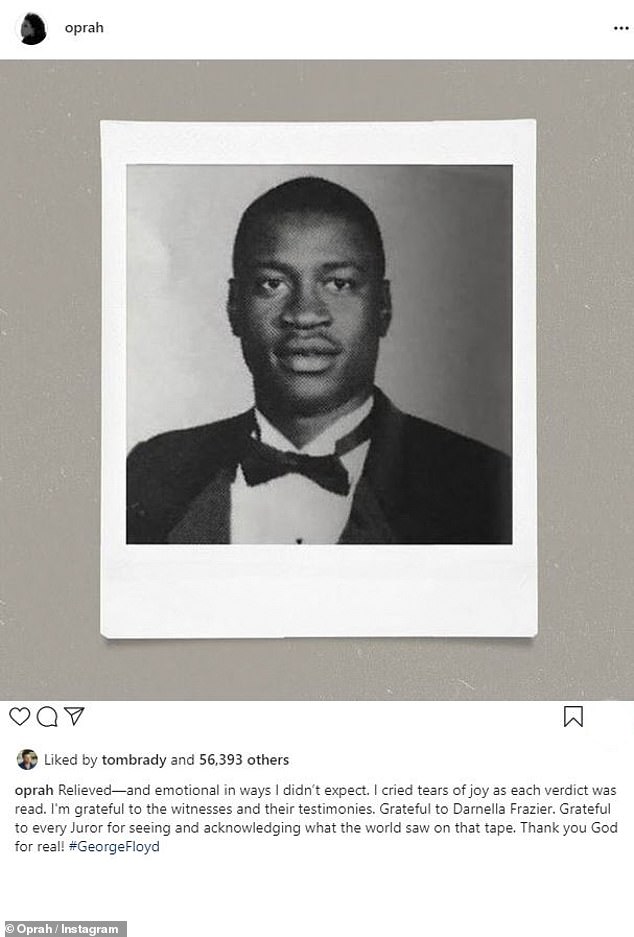 Thankful: Oprah Winfrey took to Instagram with an older picture of Floyd donning a tuxedo, expressing her relief after the verdict was read 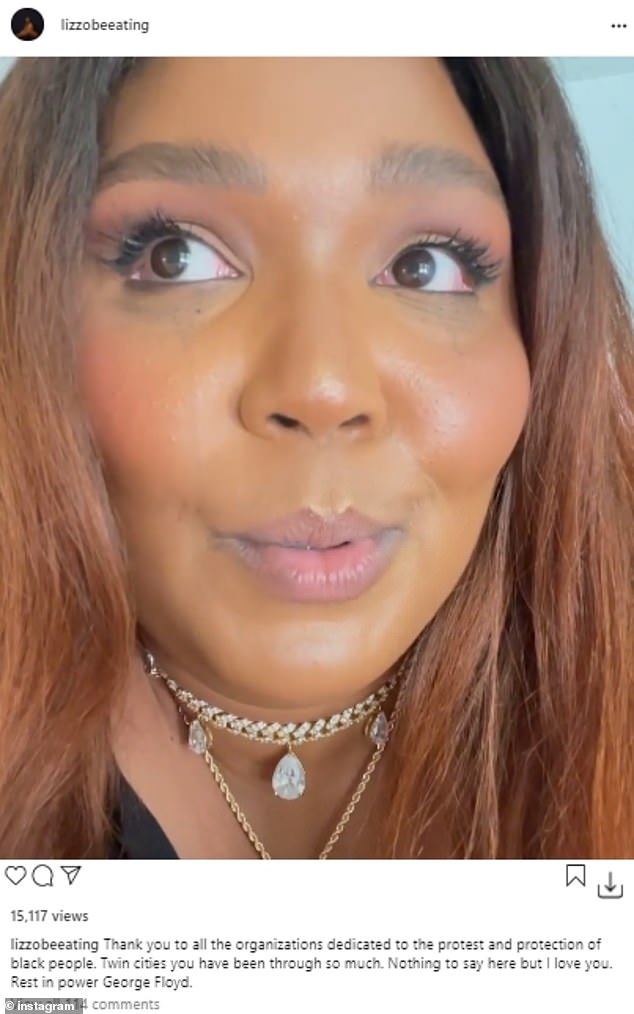 Emotional: Grammy winner Lizzo took to her Instagram account as she held back tears saying she had ‘nothing to say but everything to feel’

Following celebrity reactions, Barack Obama tweeted: ‘Today, a jury did the right thing. But true justice requires much more. Michelle and I send our prayers to the Floyd family, and we stand with all those who are committed to guaranteeing every American the full measure of justice that George and so many others have been denied.’

Oprah Winfrey took to Instagram with an older picture of Floyd donning a tuxedo, expressing her relief after the verdict was read.

‘Relieved – and emotional in ways I didn’t expect,’ she said. ‘I cried tears of joy as each verdict was read. I’m grateful to the witnesses and their testimonies. Grateful to every Juror for seeing and acknowledging what the world saw on that tape. Thank you God for real!’

Meanwhile, Oscar-winner Viola Davis lead reactions on Instagram who posted a painting of Floyd with the caption: ‘GUILTY!!!! As it should!! Now….rest in peace George Floyd. Rest. You and your family have been vindicated.’

In an emotional video posted to Instagram, Grammy winner Lizzo spoke directly to her 10.2million followers, while holding back her tears. 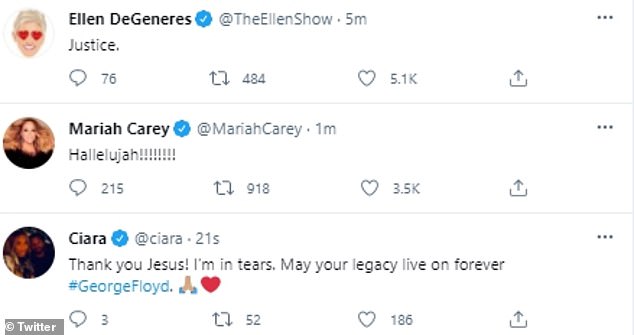 Response: Stars including Ellen DeGeneres, Mariah Carey and Ciara tweeted just seconds after the verdict was read out 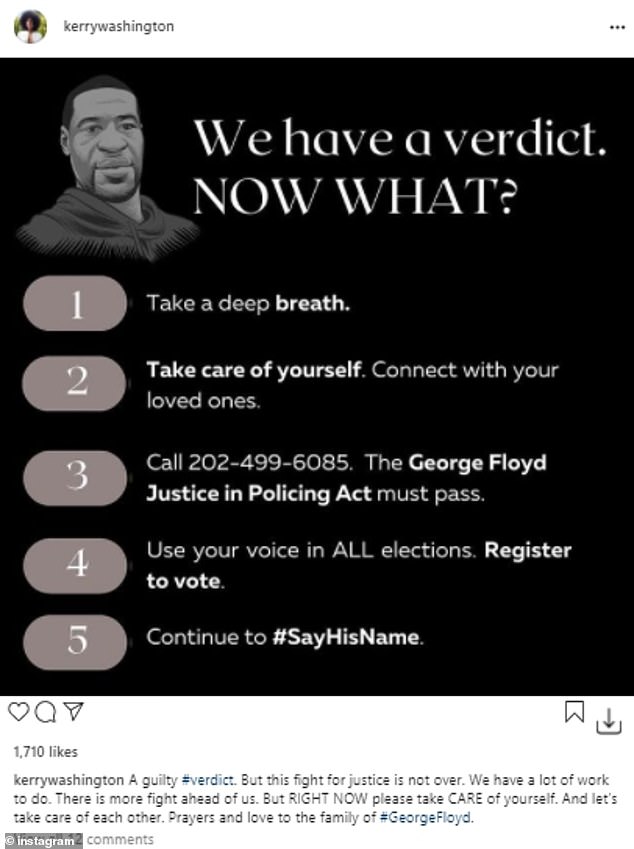 She captioned the post: ‘Thank you to all the organizations dedicated to the protest and protection of black people. Twin cities you have been through so much. Nothing to say here but I love you. Rest in power George Floyd.’

Kerry Washington also took to her Instagram page to share a graphic that read ‘We have a verdict. Now what?’ which contained a call to action for her followers, urging them to help pass the George Floyd Justice in Policing Act.

Mariah Carey also shared the same graphic, adding to her Instagram Stories: ‘Thank you because we need this. Sending love and prayers to the Floyd family. This is a day that will never be forgotten.. Believing something good will come out of this tragedy.. it’s a start. Praise the Lord!’ 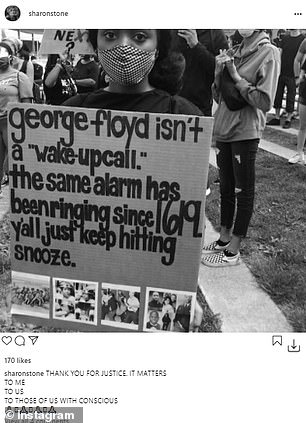 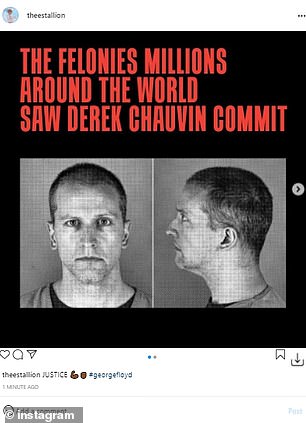 Speaking out: Sharon Stone (left) and Megan Thee Stallion (right) shared their reactions to the verdict on Instagram 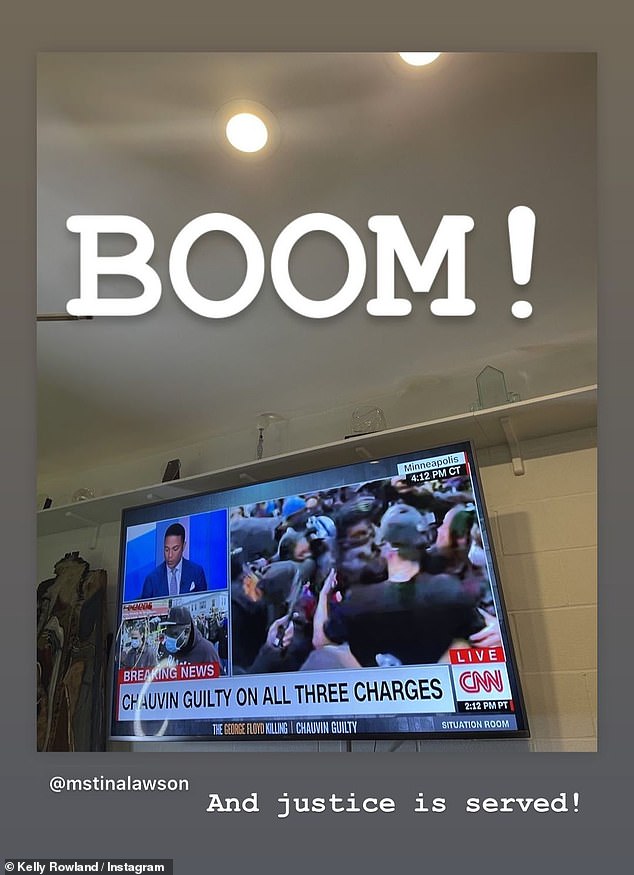 Big moment: Kelly Rowland shared a shot of her TV screen as she watched CNN coverage of the trial, writing, ‘And justice is served!’ 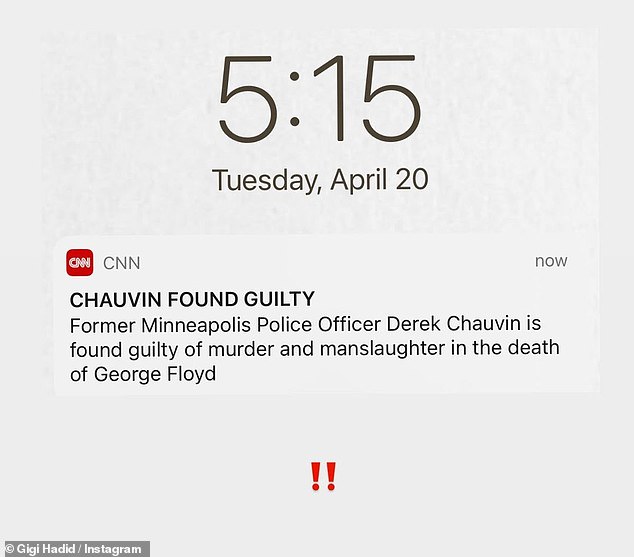 Reaction: Model Gigi Hadid posted a pair of exclamation points in reaction to news of the verdict 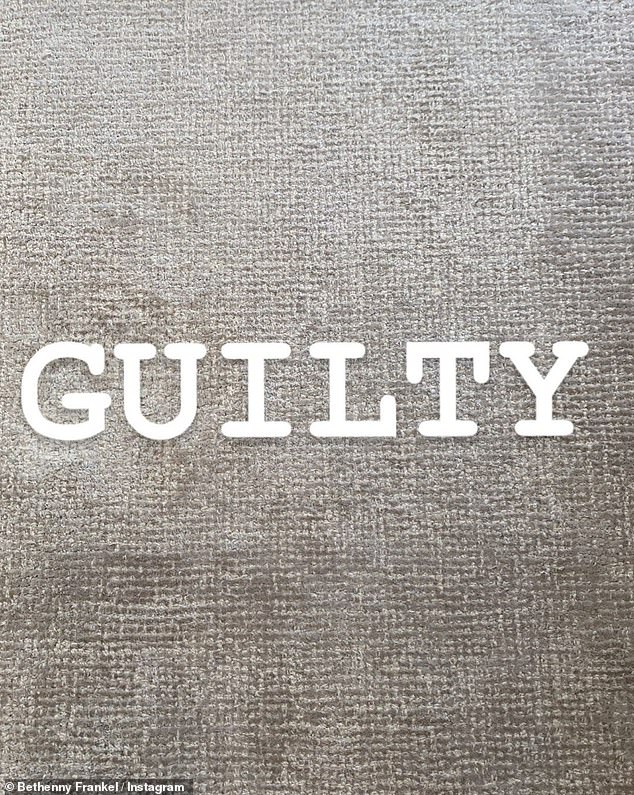 Not mincing words: Bethenny Frankel posted a shot of the word ‘Guilty’

Oscar-winning actor Jamie Foxx posted his reaction to the verdict, which he called a ‘bittersweet moment’ in a response on Instagram.

‘I am happy and relieved that the person that did this horrendous thing to you and your family was found guilty,’ Foxx began his post. ‘The bitter is that we cannot bring you back… The bitter is all of the lives that were affected by what happened to you… all the tears that have been shed… and hearts broken…’

He continued: ‘But through prayer and faithful people… Today with the announcement of this Verdict gives us some type of hope… hope that we can start righting the wrongs that have been in place for years in this country… rest in power George… And know that your words resonated around the whole world…’ 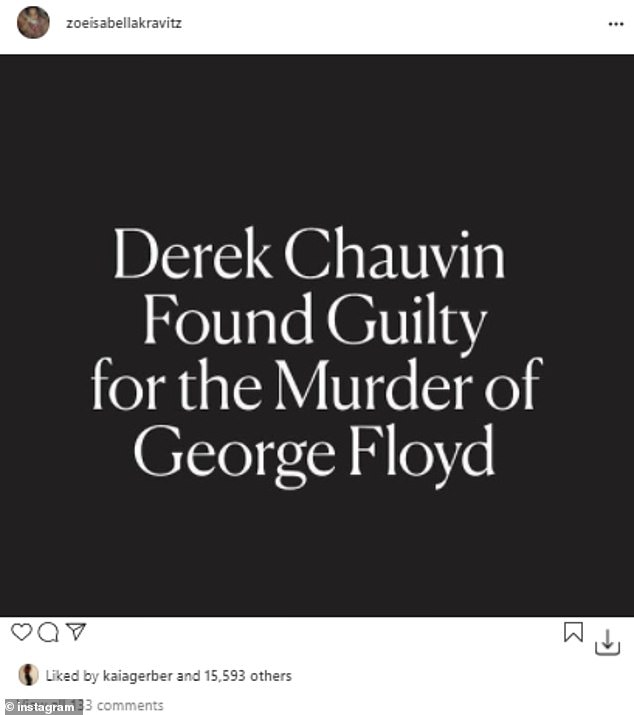 Justice: Zoe Kravitz joined celebrities flooding social media on Tuesday as they reacted to the news of Derek Chauvin being found guilty in the death of George Floyd

Satisfied: Director Ava DuVernay posted a fist emoji with the number three, representing each count Chauvin was found guilty on 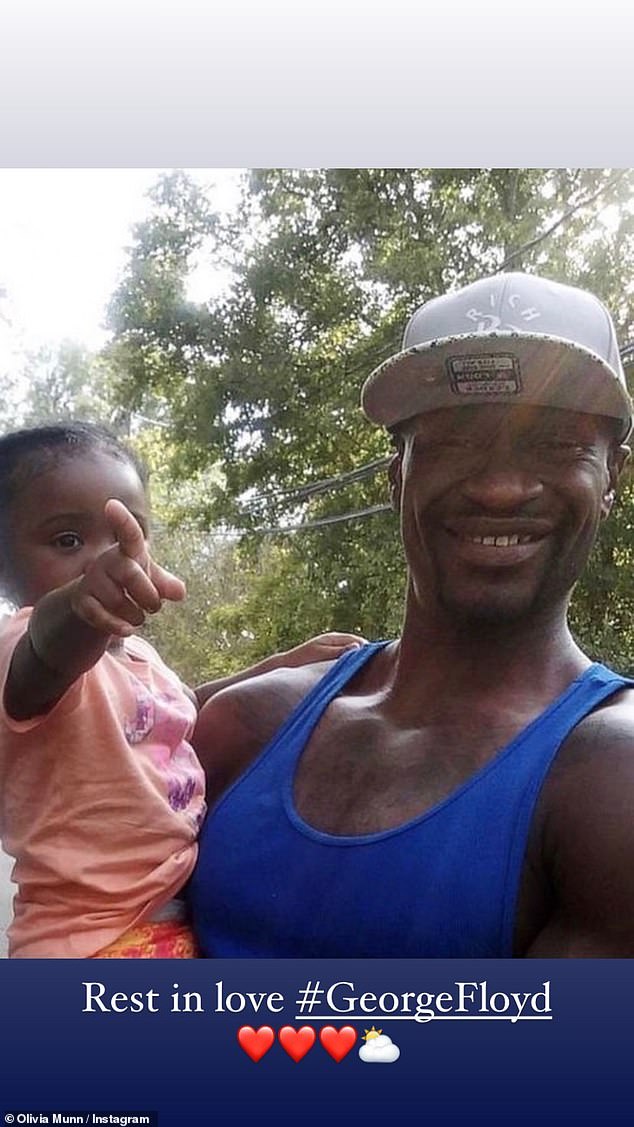 Beloved: Actress Olivia Munn shared a shot of the late Floyd with his child, writing, ‘Rest in love’ 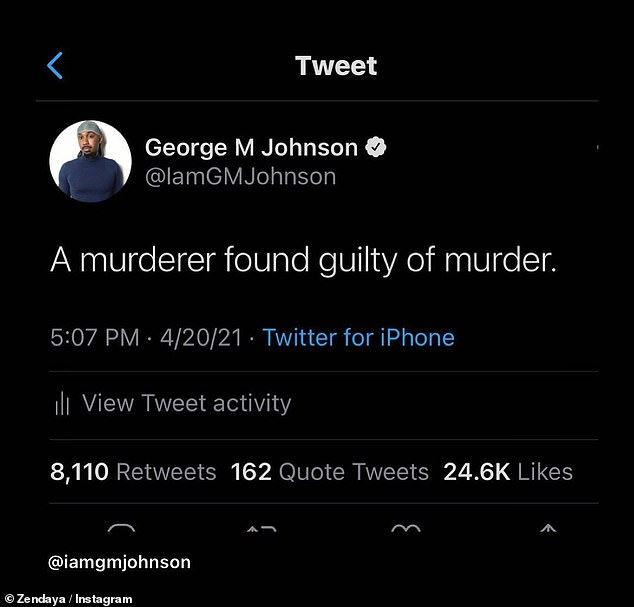 A transcript last year revealed Floyd’s last moments, whereby he was said to have called out: ‘Momma, I love you. Tell my kids I love them. I’m dead’

Foxx finished his response by referencing Floyd’s heartbreaking words, concluding: ‘You asking for your mother… You asking for just a bit of air… You asked for dignity…. Today we took a small step towards honoring you and the thousands like u who had Their lives taken senselessly… god bless u and ur family. And god bless us all.’ 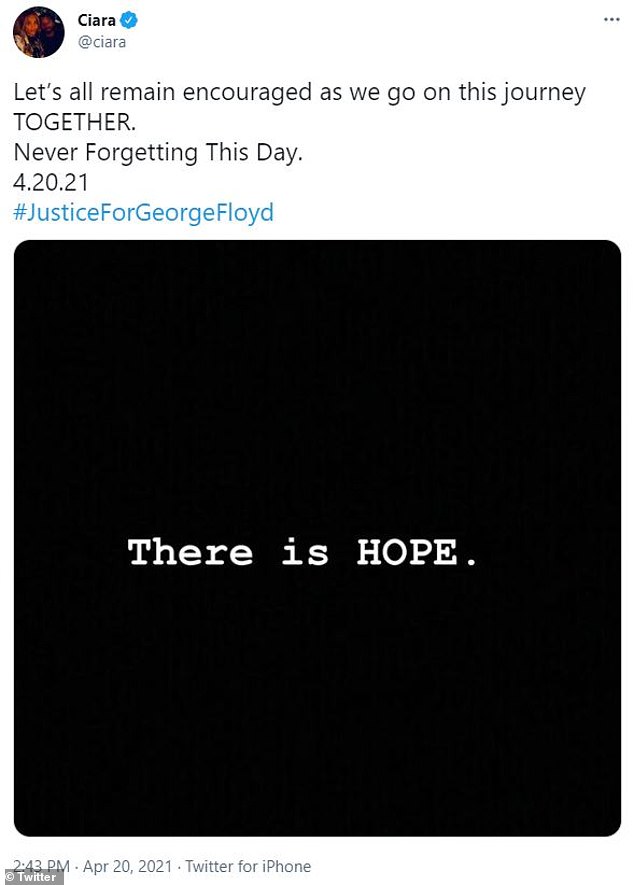 Optimistic: Singer Ciara said that the day marked a new hope for society 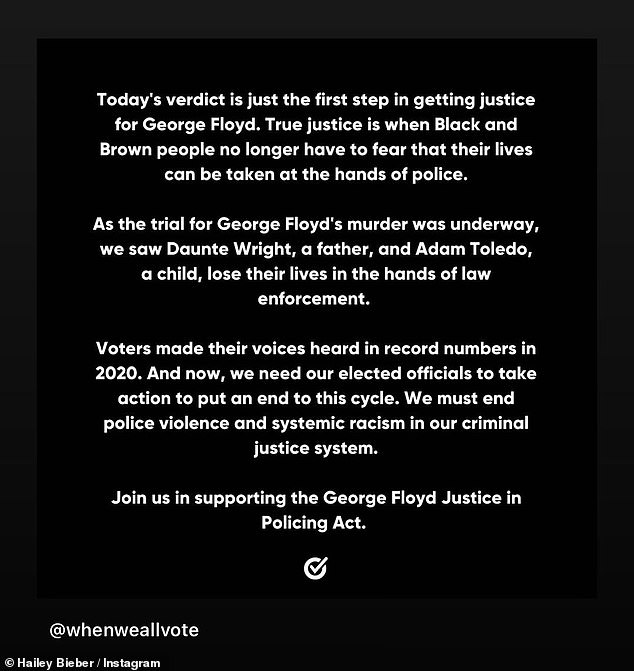 Moving forward: Hailey Bieber shared a statement about another step for social change

Statement: Singers such as Michelle Williams, Leanne Rimes and Katy Perry posted messages in support of the verdict

Calling for change: Justin Timberlake said his heart was with George Floyd’s family amid the news

The View’s Sunny Hostin, who was appearing on ABC news, opened up about her legal background and how it tempered her expectations heading into Tuesday.

‘I’ve been a lawyer for 27 years and I remember when I was in law school during my first year, the Rodney King verdict came out and it was an acquittal for four officers who, on video, beat and stomped and Tased a man, beat a man 56 times with a baton and I believed my eyes then,’ Hostin said in the segment.

Hostin continued: ‘So I believed my eyes this time with George Floyd, and even though I knew that fast verdicts always hint at an agreement, even though all of my training told me they likely convicted on at least the highest count or at least the lowest count.’

She noted that police convictions are rare ‘because Black men and Black boys are killed by police with impunity in this country,’ adding, ‘I am so relieved that this is what justice finally looks like for my community.’

Justin Timberlake said his heart was with George Floyd’s family on the emotional day.

‘This verdict is just the first step in a long line of injustice against the Black community, often with no consequences,’ he said. ‘The work is not nearly done. While there are many more families waiting for justice, my heart is with George Floyd’s family right now.’