Startup develops edible ketchup packets made from SEAWEED for condiments

Humans produce more than 300 million tons of plastic a year, half of which is single-use and

Now a UK startup is doing its part to break our global plastic addiction with an eco-friendly casing that can be used for ketchup, mustard, soy sauce, or any condiment.

Made from seaweed, Ooho sachets from Notpla are biodegradable, compostable and even edible.

Seaweed farmed in northern France is dried out and ground into powder before undergoing a patented process that turns it into a clear goopy substance which can be molded like plastic.

Seaweed grows faster than paper or starch, and doesn’t compete for land or fresh water.

Made from seaweed extract, Notpla’s Ooho sachets can be used in place of ketchup, soy sauce or salad dressing packets. The packaging is biodegradable, compostable and even edible

‘Seaweed is a fantastic base material due to its sustainability credentials and fast growth,’ COO Lise Honsinger told Packaging Europe. ‘By using a natural material as an input, it makes us a carbon recycler, rather than plastics which obviously come from non-renewable oil.’

‘Can you imagine something growing that fast?’ he tells Business Insider. ‘You don’t need fertilizer, you don’t need to put water on it, and it’s a resource that we have been using for a long time.’

The sachets come in a variety of sizes, from a third of an ounce to two ounces. 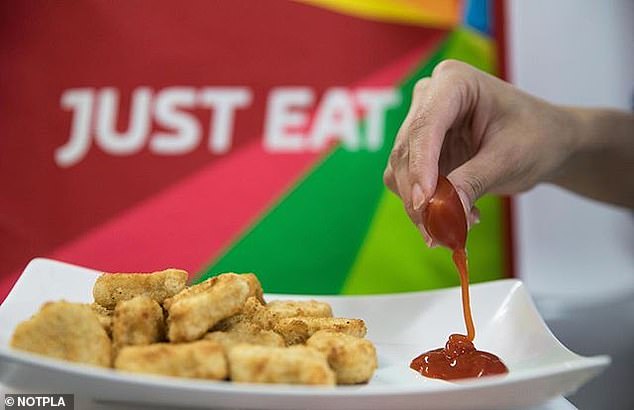 The ‘Ooho’ name comes from the sound people make when they see it for the first time, Garcia says

The ‘Ooho’ name comes from the sound people make when they see it for the first time, Garcia says.

The company has partnered with Just Eat, a British food delivery app, on a trial program using Ooho packets for Hellmann’s ketchup, barbecue sauce and other condiments.

According to Unilever,  Hellman’s parent company, over 90 percent of customers felt the sachets were just as easy to use as regular plastic packets and would like to see more takeaway sauces in Ooho packaging.

‘This trial is a great example of collaboration driving game-changing innovation,’ said Unilever’s Hazel Detsiny. ‘We’re creating a new and exciting experience for Just Eat customers who can enjoy the same great tasting Hellmann’s – but with zero plastic waste.’

Notpla has already developed Oohos for beverages: In lieu of a bottle cap or pull tab, you just bite off the corner and drink.

In early March, a vending machine that dispenses Oohos filled with an Lucozade energy drink was installed at a gym in London. 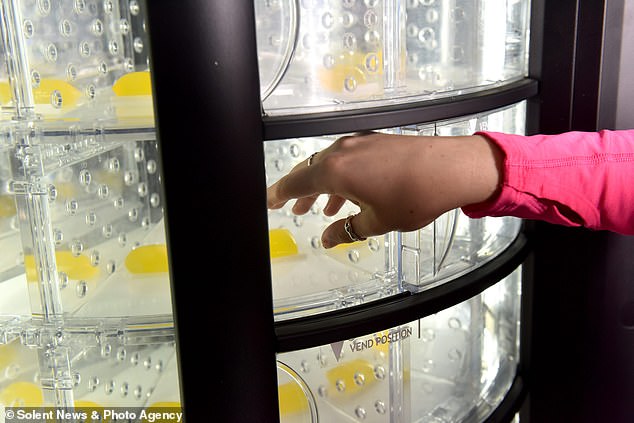 After raising more than $1 million in a crowdfunding campaign last year, Notpla raised more than $5 million in venture capital earlier this year.

Next, it’s taking a bite out of another environmental menace – carryout containers – with a line of disposable takeout boxes, coming to market later this year.

Most cardboard takeaway containers are treated with polylactic acid, or PLA, which can take centuries to decompose.

The Notpla Box is treated with seaweed and plant extracts to make it waterproof and greaseproof. 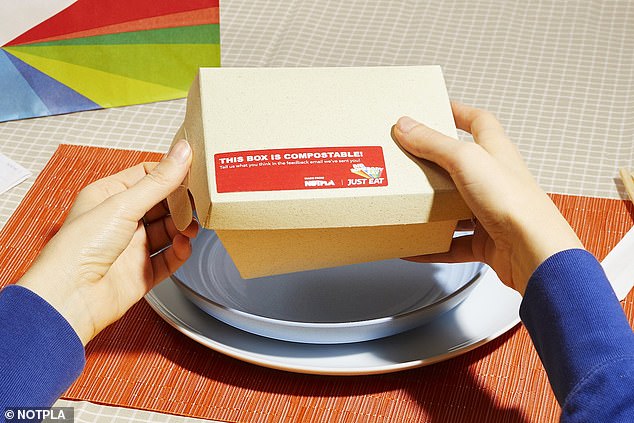 Treated with seaweed and plant extracts to make it waterproof and greaseproof, the Notpla carryout box biodegrades in three to six weeks

It completely breaks down in just three to six weeks.

‘What we’ve done is replace the PLA with our natural material, so even if it does enter nature, it will degrade naturally like a piece of fruit or a vegetable,’ Juno Wilson, Notpla’s projects and business manager, told Business Insider.

How much plastic winds up in the ocean every year?

Of the 30 billion plastic bottles used by UK households each year, only 57 percent is recycled.

And 95 percent of plastic packaging – is thrown out after a single use, according to the Ellen MacArthur Foundation.

More than 8.8 million tons of plastic finds its way into the ocean each year, equivalent to a truckload every minute.

At current rates, that will increase to four truckloads per minute in 2050, by which time plastic will outnumber marine life in the world’s waters.

More than 8.8 million tons of plastic finds its way into the ocean each year

More than half of the plastic waste in the ocean comes from just five countries: China, Indonesia, Philippines, Vietnam and Sri Lanka.

China alone is responsible for 2.4 million tons of plastic in the ocean, nearly 28 percent of the global total.

The United States contributes just 77,000 tons, or less than one percent.