State death rates for coronavirus in the US

The coronavirus death toll in the United States has doubled in a little over a week to more than 48,000 – the highest in the world – and the total number of infections has increased to over 856,000.

As the number of cases and death toll continues to rise, the current fatality rate for COVID-19 across the United States is 5.6 percent.

All 50 states in the US have now reported deaths due to coronavirus after Wyoming announced its first fatality earlier this month.

The true figures, however, are believed to be much higher, in part, because of limited testing across the country and difficulties in counting the dead.

Here is a state-by-state breakdown of death rates, as well as the number of deaths per 100,000 people:

New York remains the hardest-hit state amid the coronavirus pandemic.

Gov. Andrew Cuomo said his state was showing more signs the worst was over including a drop in hospitalizations but he warned of a potential ‘second wave’ if restrictions are relaxed irresponsibly.

Cuomo has announced that he is creating a massive ‘tracing army’ that will find infected people and get them into isolation. He acknowledged that local officials were feeling political pressure to reopen businesses but warned against making decisions based on such factors.

A handful of states in the Northeast have created a pact to ordinate reopening amid the pandemic.

It comes as the death toll in New York state climbed past 15,000. The toll doesn’t count nearly 4,900 deaths in New York City that are believed to have been caused by the virus but haven’t been confirmed by a lab test.

In California, health officials have said that two people with coronavirus died in the state weeks before the first reported US death from the disease on February 29 in Washington state.

The finding adds to the evidence that the virus was circulating in the US earlier than previously thought.

Health officials in Santa Clara County revealed on Tuesday that two people died at home on February 6 and February 17.

The first confirmed US death from the virus was reported on February 29 in Kirkland, Washington.

The Medical Examiner-Coroner, however, received confirmation on Tuesday that tissue samples sent to the CDC for the prior two deaths had tested positive for the virus.

California, Oregon and Washington have formed a pact to coordinate reopening the West Coast states.

Protests have flared in Midwestern states over the current stay-at-home orders in place.

The stay-at-home measures, which experts say are essential to slow the spread of the virus, have battered the US economy and more than 22 million Americans have filed for unemployment benefits in the past month.

Demonstrations to demand an end have been erupting in states like Ohio and Minnesota, Michigan.

Despite the protests, the governors of seven mostly Midwestern states – Michigan, Ohio, Wisconsin, Minnesota, Illinois, Indiana and Kentucky – have said they will work in close coordination to reopen their economies battered by efforts to contain the coronavirus.

The governors of Iowa, Missouri, North Dakota and South Dakota declined to join the partnership.

A handful of US states, mostly in the South, are aggressively moving towards reopening their economies even though health officials have warned that lifting lockdown restrictions too soon could risk a second surge in infections.

Georgia, Texas, Tennessee, South Carolina and Colorado have all set states for to partially reopen.

None of those states have met basic White House guidelines unveiled by President Trump last week that call for 14 days of declining cases before a state should reopen.

The loosening of economic restrictions in the middle of the still deadly pandemic is set to provide a live-fire test on whether parts of the US can start to reopen without triggering a surge in infections that may force them to close again.

Amid a national debate over how to fight the virus while mitigating the deep economic toll, these moves by the cluster of states are the first to test the borders of resuming ‘normal’ life.

Georgia has been hardest-hit of these states with 19,000 cases and nearly 800 deaths. Infections in South Carolina have increased to more than 4,600 and there are now 135 deaths. There are nearly 7,400 infections in Tennessee and 157 deaths. Texas has recorded nearly 21,000 cases and 545 deaths. 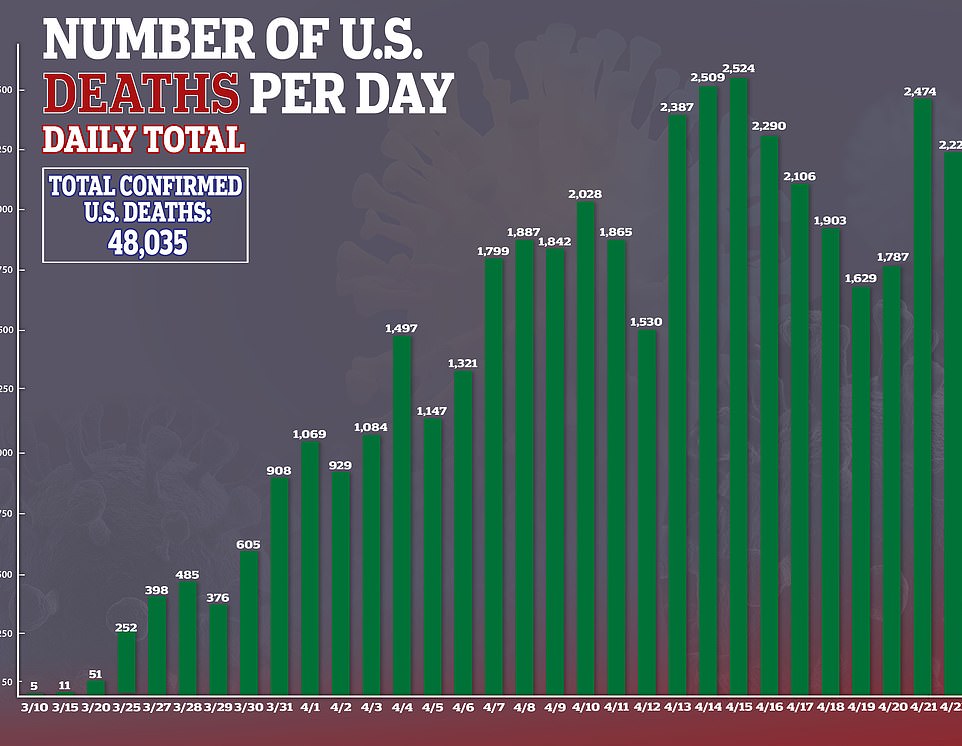 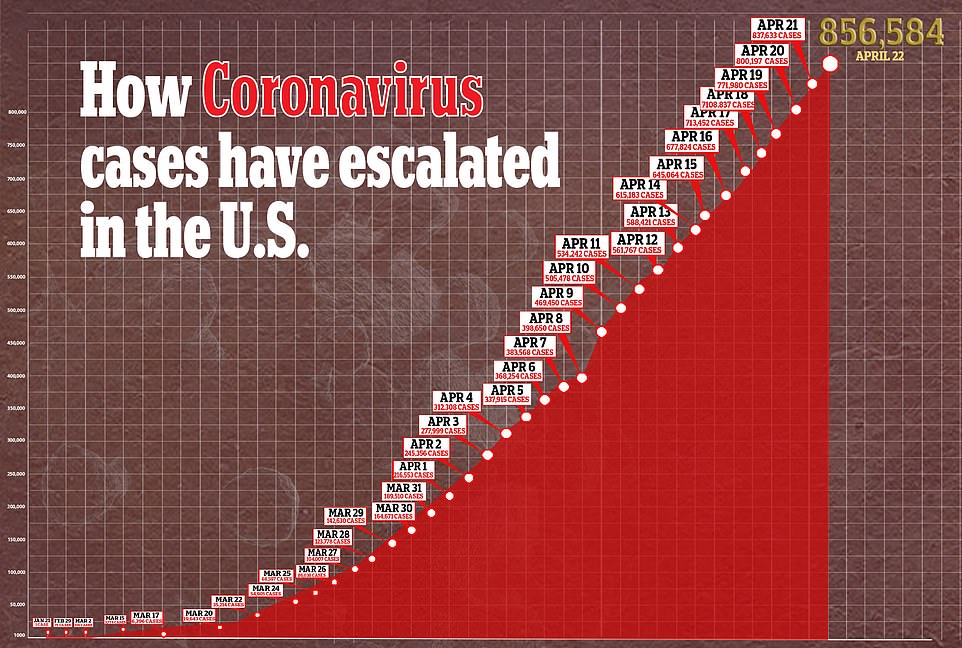