Statue of Christopher Columbus is removed in Chicago’s Grant Park

Statue of Christopher Columbus is removed in Chicago’s Grant Park

A statue of Christopher Columbus that drew chaotic protests in Chicago’s Grant Park was taken down early on Friday amid a plan by President Donald Trump to dispatch federal law enforcement agents to the city.

Crews used a large crane to remove the statue from its pedestal as a small crowd gathered to watch.

Several work lorries were seen in the area but it was unclear where the statue could be taken. 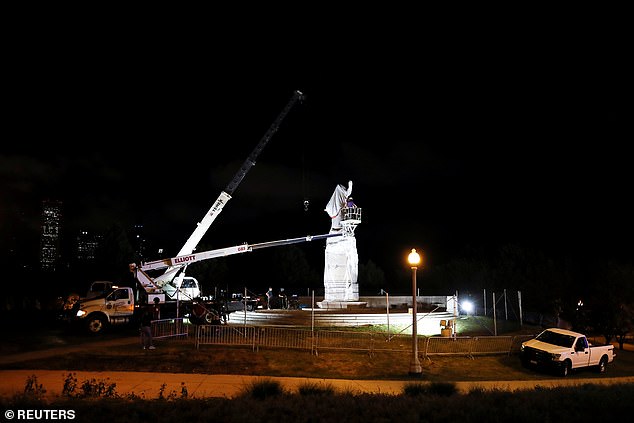 The figure of the colonial explorer in Grant Park – who is seen by many as a symbol of white supremacy – was the center of violent scenes in Chicago on Friday night.

Cops unleashed tear gas on protesters and several were left injured after they attempted to tear down the statue in Grant Park.

At least 20 complaints of police brutality were filed against officers following the night’s events, with one activist Miracle Boyd saying she had one of her teeth knocked out by a cop when they smacked her in the face.

Days later, Chicago police released a shocking video showing protesters aiming fireworks and frozen water bottles at officers and announced 49 officers had been injured by ‘criminal agitators’ in the commotion.

The White House plan came after a protest over the statue led to police swinging batons and demonstrators hurling frozen water bottles, fireworks and other projectiles at officers.

It also stemmed from a shooting during a funeral that wounded 15 people.

A collection of activist groups had filed a lawsuit on Wednesday, seeking to block federal agents from interfering in or policing protests. 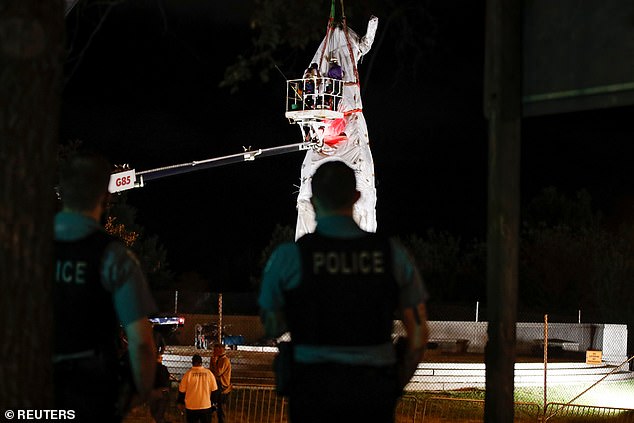 On Tuesday in another neighborhood, a spray of bullets from a car passing a gang member’s funeral wounded 15 people and sent dozens running for their lives.

‘I’ve never seen things worse in this city than they are right now,’ said the Rev. Michael Pfleger, a Roman Catholic priest and longtime activist on the city’s South Side.

Much of the strain stems from the fact that it remains unclear exactly what the federal officers will do in Chicago.

Mayor Lori Lightfoot sought to tamp down fear that the surge will resemble the kind of scene that unfolded in Portland, where unidentified agents in camouflage have beaten unarmed protesters and stuffed some of them into unmarked vehicles.

Lightfoot said she has been told the U.S. Attorney’s Office will supervise the additional agents supporting the Chicago offices of the FBI, the Drug Enforcement Agency and the Bureau of Alcohol, Tobacco, Firearms and Explosives.

But given the longstanding animosity between city officials and Trump, leaders from the mayor on down worry that those promises will not hold up.

City officials will be on guard for any ‘steps out of line,’ particularly from agents with the Homeland Security Department, and they will not hesitate ‘to take the president to court,’ Lightfoot said.

Trump announced the plan Wednesday, saying he would send agents to Chicago and Albuquerque to help combat rising crime.

Barr said the number of agents being deployed to Chicago is ‘comparable’ to the Kansas City surge of more than 200.

Trump, who is making law and order a central theme of his re-election campaign, painted Democrat-led cities as out of control and lashed out at the ‘radical left.

‘In recent weeks, there has been a radical movement to defend, dismantle and dissolve our police department,’ Trump said, blaming the movement for ‘a shocking explosion of shootings, killings, murders and heinous crimes of violence.’

Lightfoot has repeatedly said she does not support protesters’ calls to pull money from police in favor of social services.