ALL 6.4 million Victorians could soon be back in lockdown if state’s coronavirus cases continue to rise – as NSW threatens to JAIL people from hot spot suburbs who cross the border

By Charlie Coë and Levi Parsons For Daily Mail Australia

The entire state of Victoria could be forced back into lockdown if the number of new COVID-19 cases continues to rise.

‘If we don’t get control of this really quickly we will end up with … a whole state shutdown,’ Mr Andrews said on 3AW radio.

Victoria has a population of 6.4 million, the second biggest state in terms of population behind New South Wales.

Mr Andrews is putting 36 suburbs within 10 postcodes into lockdown from 11.59pm on Wednesday as the number of coronavirus cases keeps rising in the state.

On Monday and Tuesday alone, the state identified 139 new cases of the deadly respiratory infection.

Premier Daniel Andrews speaking to the media on Tuesday as he announced 10 postcodes – comprising a population of about 311,000 – would be locked down to slow a resurgence of COVID-19 cases. He has warned the entire state of Victoria could be forced back into lockdown if the number of new coronvirus cases continues to rise 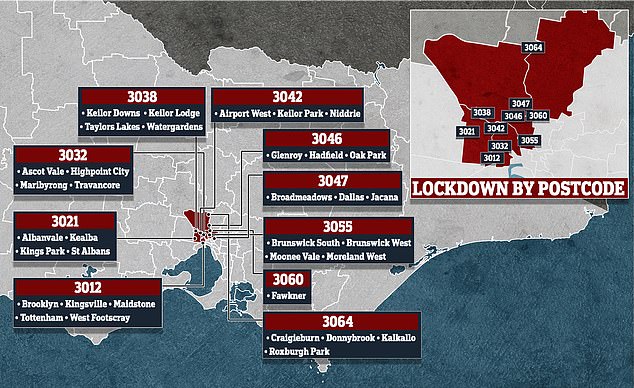 He said his public health advisors told him the move was necessary to stop ‘shutting down all postcodes later’.

‘This is not over. This is so wildly infectious that even minor breaches of the rules can lead to this random movement of the virus around the community,’ he said.

Mr Andrews added a ‘booze bus-type arrangement’ on main roads through the area would enforce the lockdown.

‘There will be random checks about why people are out of their house and if they have a valid reason,’ he said.

‘I hope we don’t have to issue any fines but unless you enforce these rules they won’t be followed.’

The warning by the Victorian premier comes as the NSW government announced on Wednesday morning it will ban people entering the state from the 36 Melbourne suburbs which have been locked down. 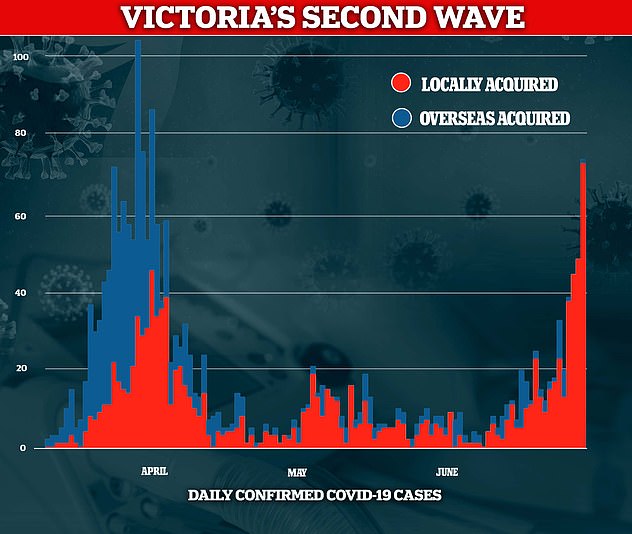 Health Minister Brad Hazzard said anyone from those areas caught in NSW could face six months in jail and an $11,000 fine from 11.59pm tonight.

NSW residents coming back from those hotspots are allowed to return home but must isolate at home for 14 days.

Mr Hazzard said he was ‘still working through’ how police will enforce the rule – but said one option would be to quiz drivers with Victorian licence plates on where they have been.

Queensland announced a similar policy on Tuesday and went further by requiring residents returning from those hotspots to pay for their own two-week quarantine before being allowed home.

‘Victorians living in virus hotspots have to take the Victorian and NSW health orders seriously and should be very aware that NSW will impose penalties if they seek to leave hotspot suburbs to enter NSW,’ Mr Hazzard said today.

There will be exemptions such as to obtain urgent medical care or for compassionate reasons.

Meanwhile, restrictions on entertainment venues, weddings, community sport and other gatherings will be eased in NSW from today but strict physical distancing measures remain in place.

Mr Hazzard said businesses should ensure they have a COVID Safety Plan outlining exactly how they will maintain a safe environment for their staff and customers. 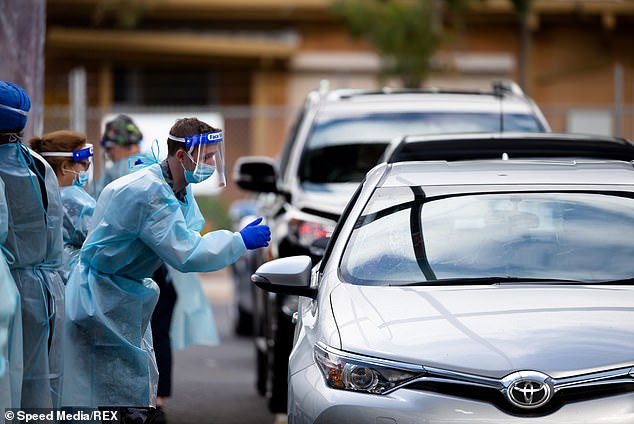 COVID rules are eased in NSW

The following COVID-19 restrictions have been eased from today, July 1:

· The number of people allowed inside indoor venues will be determined by the ‘one person per 4 square metre’ rule, with no upper limit. This includes function centres.

· Cultural and sporting events at large stadiums, racecourses and motor racing tracks will be allowed up to 25 per cent of their normal seated capacity to a maximum of 10,000. These events must be ticketed and seated and follow strict guidelines.

· Alcohol can still be served to seated patrons only, including at conference and function venues.

· Cinemas, theatres and concert halls can reopen subject to the one person per 4 square metre rule.

The rules on gathering remain the same: 20 guests inside the home and 20 for gatherings in a public place.

‘Until we have a vaccine, everyone has a role to play keeping the community safe, whether that is mum and dad at their kid’s soccer match or your local café operator,’ Mr Hazzard said.

‘The NSW Government has always said with the easing of restrictions comes risk, so I urge everyone to maintain physical distancing, get tested if you feel unwell and stay home if sick.’