Steak is BACK at JD Wetherspoon!

Steak will return to JD Wetherspoon next Tuesday after customers were left furious when the pubs were unable to serve any this week.

The chain will reintroduce sirloin steak, rump steak and gammon steak to its 900 pubs across the UK and Republic of Ireland for Steak Club next week.

The three items have been off the menu at the company’s pubs since Tuesday after a health scare at Russell Hume, a Derby-based supplier to the pubs and other firms.

Wetherspoon pubs, whose sirloin steak meal is pictured, are reintroducing steak next week 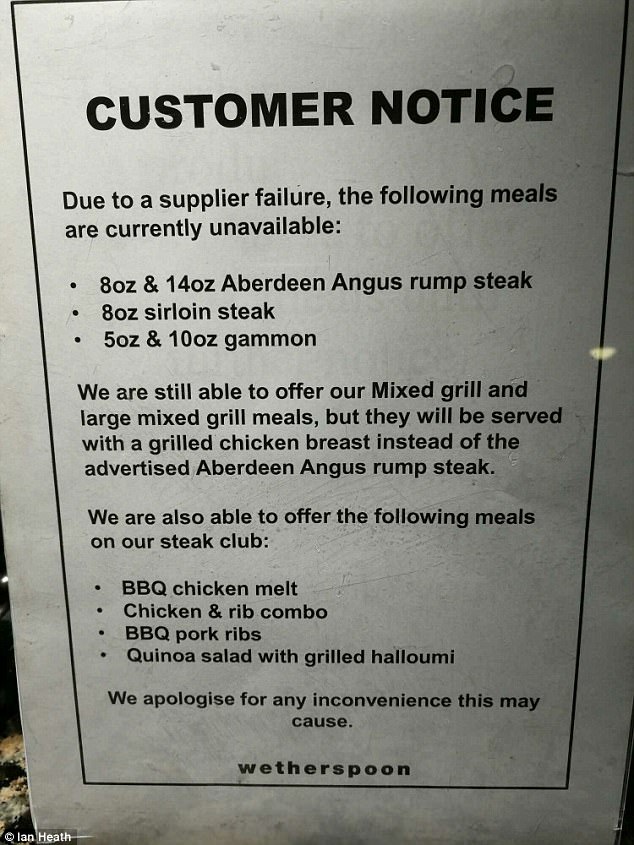 A notice, spotted by customer Ian Heath, attributed the absence to a ‘supplier failure’, saying the Aberdeen Angus rump steak, Sirloin steak and gammon would be unavailable

Wetherspoon has since cancelled its contract with Russell Hume and is now sourcing its steaks from various new suppliers in Britain and Ireland.

The pub chain’s chairman Tim Martin said this morning: ‘Firstly we wish to apologise to our customers for the inconvenience caused to them.

‘However, our decision to stop serving steak from Tuesday, despite limited information from the supplier, was the correct one.

‘Steak is one of the most popular dishes on our menu, and we serve around 200,000 per week on average, about half of these on our extremely popular Tuesday Night Steak Club.

‘We have now sourced alternative suppliers and our pub staff are once again looking forward to serving the steak dishes from Tuesday, January 30 onwards.

‘On Wednesday the FSA reported that they were thoroughly investigating Russell Hume Ltd, but also stressed that there was no indication that people had become ill from eating meat supplied by them. We will continue to monitor the situation.’

The Daily Mail reported today how meat from the supplier at the centre of the health scare was unknowingly served at several chains for 12 days before the public was warned.

It is feared millions of steak, chicken and pork meals dished up this month at pubs and restaurants – and possibly royal palaces – may have been tainted.

Which firms have been affected by the meat scandal?

Wetherspoon – All of the chain’s 900 pubs and more than 50 hotels across the UK are thought to have been serving steaks and gammon supplied by Russell Hume. 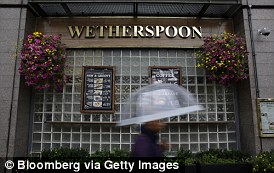 Jamie Oliver – All 32 branches of Jamie’s Italian are thought to have been serving meat supplied by Russell Hume. It is unclear if the five other restaurants in the celebrity chef’s empire were affected.

Hilton Hotels – A ‘small number’ of the hotel giant’s 41 British branches were affected.

Greene King – Said it only served ‘a handful’ of Russell Hume products across its empire of 3,000 pubs, restaurants and hotels.

Butlins, Haven and Warner Leisure Hotels – The holiday firms ditched ‘a number of meat products’ being served across their 42 hotels and resorts.

Experts questioned the secrecy surrounding the reasons for the recall, which has so far been attributed to ‘serious non-compliance with food hygiene regulations’.

The Food Standards Agency discovered problems at wholesaler Russell Hume, which supplies at least nine major chains including Wetherspoon and Jamie Oliver’s restaurants, on January 12. But the regulator did not issue a public alert until Wednesday.

Instead, it left it to Derby-based Russell Hume to warn its customers, which include Hilton hotels, Greene King pubs, and schools and care homes.

While the firm no longer holds a royal warrant, Buckingham Palace, Kensington Palace and Clarence House last night refused to deny they still source meat from the firm.

Wetherspoon learned of the issue on Tuesday when delivery drivers found Russell Hume depots ‘locked up’. The pub chain was forced to cancel its popular steak night at all its 900 venues, it is understood.

Russell Hume described the product recall as a ‘precautionary measure because of mislabelling’ and said there was ‘no reason to believe the product was unsafe to eat’.

An FSA source confirmed there were ‘public health’ concerns over what inspectors had discovered at Russell Hume’s six processing factories, but said there was ‘no indication that people have become ill’.

However, Chris Elliott, food safety professor at Queen’s University Belfast, said: ‘They will normally say there is ‘no risk to the public’ … they have not said that here.

‘The FSA talk about ‘serious non-compliance’ and food withdrawals, so it appears to me that something very serious is happening. There have been claims this is an issue of ‘labelling’, so it could be about expiry dates.’ 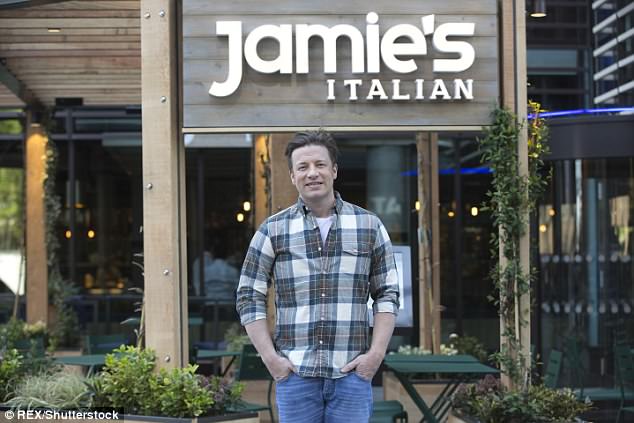 A spokesman for the Jamie Oliver Group said its restaurants had been able to source replacement meat, so the move did not result in shortages for diners 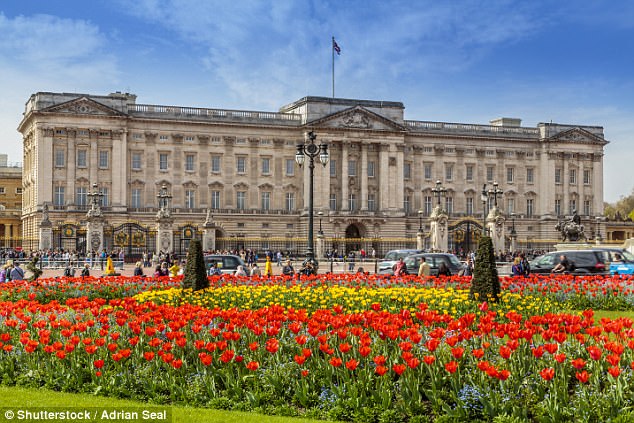 Kath Dalmeny, of food campaign group Sustain, said: ‘It is disgusting to hear that a reputable company such as Russell Hume has been breaching meat hygiene regulations, especially if it means that out-of-date meat may have been supplied to children in schools, and old people in care homes.

Wetherspoon customers were left fuming after the pub chain pulled steak from its menu – on steak night.

A notice attributed the absence to a ‘supplier failure’, saying the Aberdeen Angus rump steak, sirloin steak and gammon would be unavailable.

It said chicken would replace steak in the mixed grill, adding that alternatives in the steak club menu included pork ribs and quinoa salad with halloumi.

Russell Hume said at the time that the ‘product recall was a precautionary measure because of mislabelling’, adding that it had ‘no reason to believe that the product was unsafe to eat’.

Former Big Brother contestant Ellie Young tweeted how she went to a Wetherspoon for the Steak Club only to discover they had no steaks.

Ian Heath tweeted: ‘No steak on ‘steak night’ at the Old Manor in Bracknell. What exactly is a ‘supplier failure’?’

A spokesman for Wetherspoon said at the time that it faced a ‘supply issue’.

But Wetherspoon said it only learned the next day that the Food Standards Agency found ‘serious non-compliance with food hygiene regulations’ during a surprise inspection of Russell Hume on January 12.

Other companies including Butlin’s and Jamie Oliver’s Italian chain then became caught up in the widespread meat recall by the same supplier.

‘Out-of-date meat can make people sick, and in some cases may even be life-threatening. We put our trust in meat companies and food safety inspectors to keep our food and families safe.’

Mary Creagh, chairman of the Commons environmental audit committee, called on the FSA to come clean about the situation.

She said: ‘After the horse meat scandal, the Government promised the British public ‘never again’.’

Ms Creagh said that with the Russell Hume meat recall, ‘it looks like relabelling, which is food fraud’ may have again hit the UK meat industry.

She continued: ‘The FSA should reveal the extent and nature of the recall, and what steps they are taking to restore consumer confidence in the meat sector after this and the 2 Sisters food scandal last year.’

Asked if the recall was like 2013’s horse meat scandal, one worker at Russell Hume’s Birmingham plant said last night: ‘No, it’s not like that.’

The latest scandal began at that factory on January 12 when an unannounced inspection uncovered ‘serious hygiene concerns’.

Inspectors impounded certain products, but did not shut the factory at that stage.

Over the next seven days, they widened the inquiry to the firm’s sites in Liverpool, London, Exeter, Boroughbridge, in Yorkshire, and Inverkeithing, Scotland.

After finding ‘a pattern’ of ‘poor practices’, involving fresh and frozen red meat and poultry, all production and sales by the firm were ordered to be halted on January 19. But meat that had already been sold was not yet recalled.

It took until January 23 before the FSA ‘initiated’ a recall. Last night it was struggling to explain the delay. 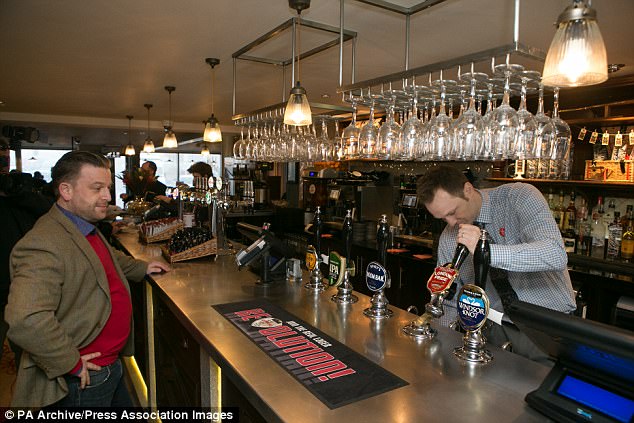 Wetherspoon serves around 200,000 steaks per week. Pictured: File photo of one of its pubs 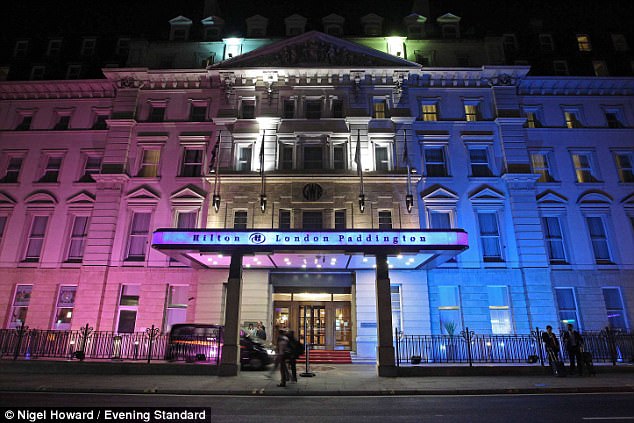 An FSA spokesman said its inspectors ‘can only work with the evidence they have’ and had to follow due process, adding: ‘Once the inspectors saw the pattern of poor practices, then there was no more production.’

He suggested it took several more days to initiate the recall because of red tape. 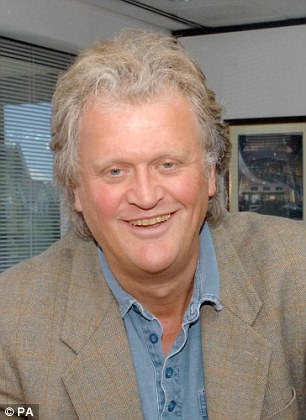 Tony Lewis, of the Chartered Institute of Environmental Health, said: ‘This is deeply worrying … it is essential the FSA provides clarification … the statements made by the respective parties simply do not add up.’

Yesterday Hilton said ‘a small number’ of its hotels were affected and that it ‘acted immediately to dispose of all products’ from Russell Hume.

The Jamie Oliver Group said it had switched suppliers. The QVC shopping channel, which sells Russell Hume meat, advised customers not to eat any bought in the past six months.

None of Russell Hume’s eight directors commented on the scandal yesterday. Chairman David Holding could not be reached for comment.

A spokesman for the firm said the FSA’s actions came as a ‘serious shock’. It said: ‘We are all well aware of the strict controls … our practices and compliance have never been challenged like this.’

It added that there was never any suggestion of its products causing illness and accused the FSA of creating ‘a very different impression’.