Steelworker kills himself by jumping into furnace at Chinese factory after losing £6,000 on market

Steelworker kills himself by jumping into furnace at Chinese factory after losing £6,000 in a day on the stock market

A steelworker has killed himself by jumping into a furnace at a Chinese factory after he lost £6,000 in one day on the stock market.

Wang Long, 34, was captured on CCTV throwing himself into the molten vat of steel at the factory where he worked in Baotou, Inner Mongolia.

A haunting still image shows him silhouetted against the fiery well moments before he hurled himself inside, causing red leaping flames and black smoke to billow out.

His employer Baogang Group confirmed that Wang’s death was believed to be related to a ‘large amount of losses’ and that he ‘could not repay his heavy debts.’

A haunting still image shows Wang silhouetted against the fiery well moments before he hurled himself inside, causing red leaping flames and black smoke to billow from the furnace 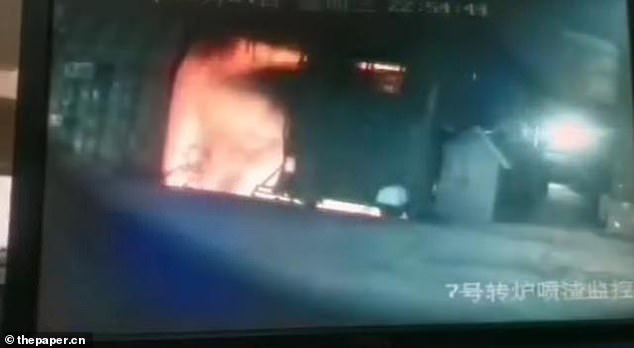 Wang jumped inside and disappeared. He was initially reported missing by his colleagues before the CCTV emerged

Last Tuesday, the steelworks had reported Wang missing after his colleagues were unable to find him following the night shift.

However, surveillance footage later revealed that Wang had died in what police believe was a suicide.

In the video, Wang is seen to take off his helmet and gloves, placing them on the ground.

For several minutes he appears to hesitate before jumping into the furnace.

The Baogang Group said: ‘We feel deeply sorry for his death. We are proactively appeasing the emotions of his family and carrying out psychological guidance for our workers.’

Wang’s colleagues told The South China Morning Post he had been trading stocks and futures for a while, that he was an ‘introverted’ character and unmarried.

Police think Wang killed himself because he had taken out large loans and on Wednesday lost 60,000 yuan (£6,000) on the stock market.

Its assets are worth around £20 billion and it has more than 48,000 employees.