Step ladder appears to walk by itself in southern India

It’s a step ladder! Equipment appears to walk by itself in India

By Glen Munro For Mailonline

A ladder which is bizarrely seen appearing to walk in southern India is now being worshiped by locals, in a bid to pacify the spirit thought to be causing the stealth movement.

In the video footage filmed in Kerala, villagers are seen staring at the object moving one step at a time on a dusty road, before running in fear. According to locals many believed the moving object was a trick initially.

The people who gathered to watch the unusual incident claim the ladder is possessed by the spirit of a person who fell and died from the ladder, according to News Lion TV. 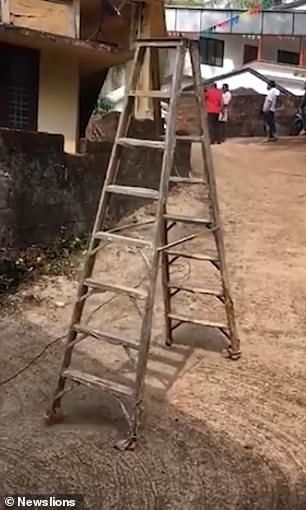 Many people who have watched the video in Kerala have apparently become too scared to visit the location and see the extraordinary occurrence with their own eyes.

A Reddit user has provided a theory to what has become known as passive dynamic walking.

It reads: ‘The ladder is on a floor that has an incline. Someone nudges the ladder so that it starts rocking.

‘The force of gravity working through the incline is just enough so the ladder keeps rocking but not so much that the rocking gets larger and the ladder falls over.

‘The structure and ‘spring’ of the ladder balanced with the forces pulling it downwards.’