Stephanie March has proved that it takes more than just blonde highlights to be transformed into Ivanka Trump.

The 44-year-old Law & Order: SVU star is making her debut as the first daughter in Comedy Central’s upcoming special A President Show Documentary: The Fall of Donald Trump, and it looks like she is having a great time getting into character.

Stephanie took to Instagram Stories on Friday to share behind-the-scenes photos of herself getting her hair and makeup done — a process that took about two hours. 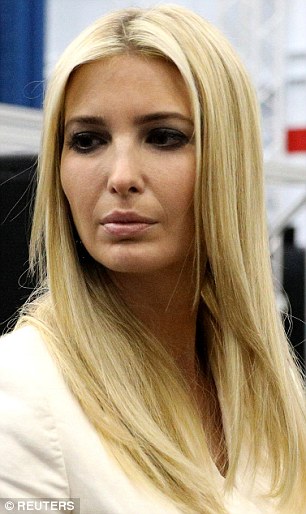 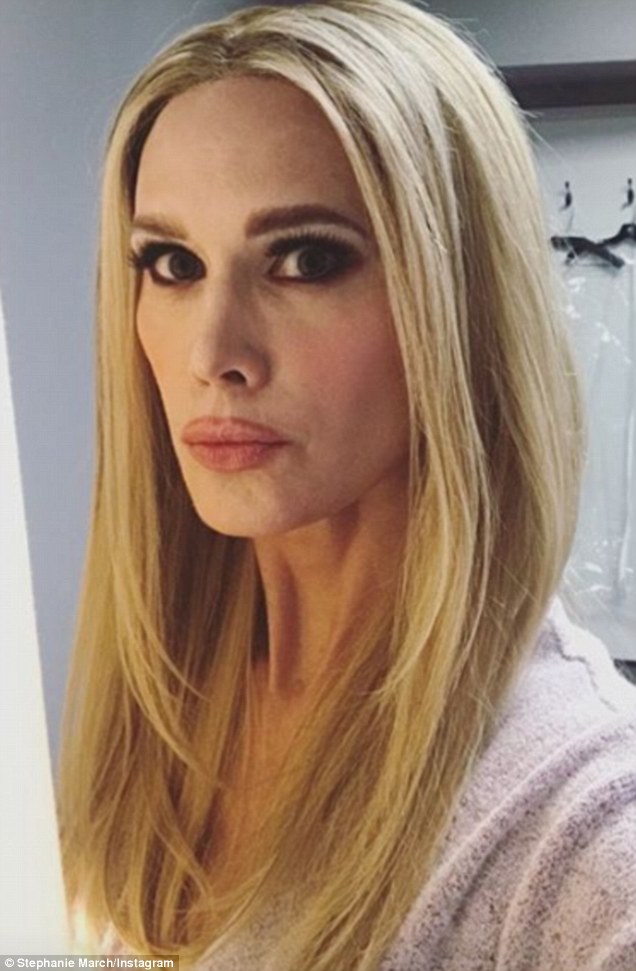 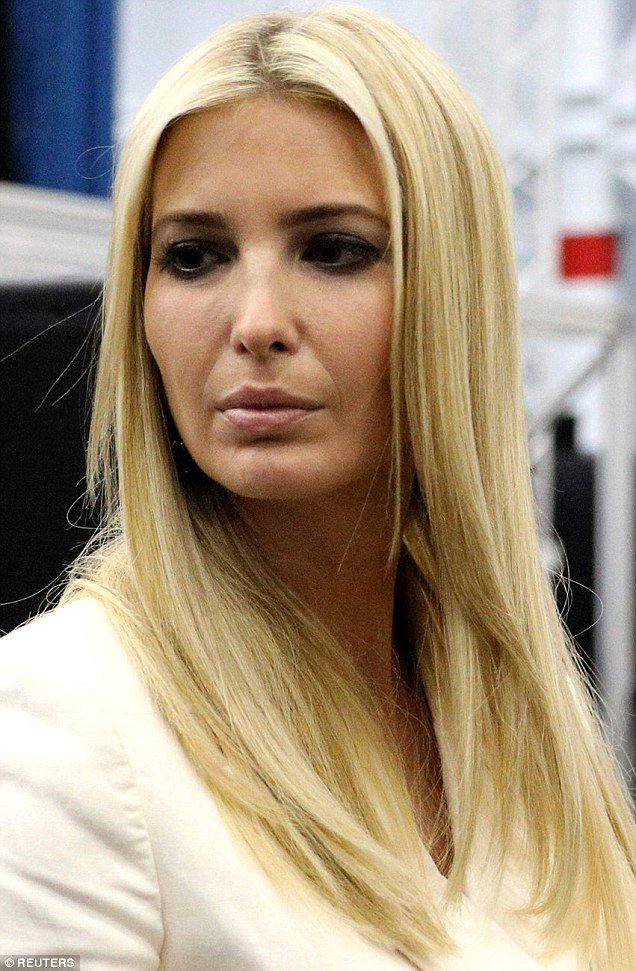 Can you tell the difference? It took about two hours for Stephanie complete her transformation into the first daughter 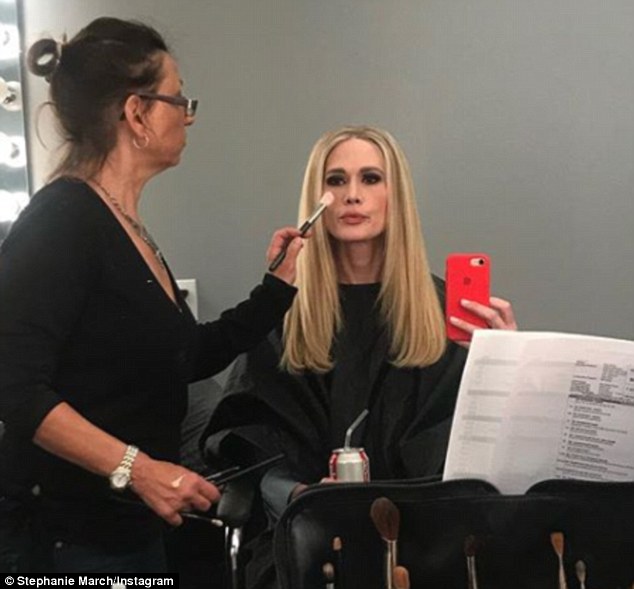 The actress teased her Ivanka transformation earlier this month when she shared a picture of herself going over her lines while wearing a wig cap.

‘This was a fun one. What is it? Stay tuned… #icantbelieveigetpaidforthis,’ she captioned the mysterious image.

After it was revealed that she would be playing 36-year-old Ivanka in the special, Stephanie started sharing snapshots of her transformation with her 46,000 followers.

She kicked off the series of photos with a picture of herself in her normal clothes and makeup at 5:30 in the morning —  ironically, the same time the the real Ivanka wakes up. 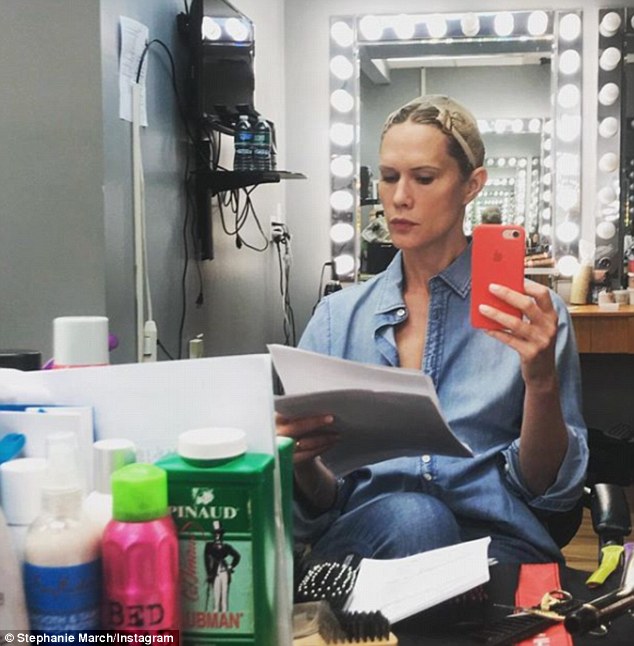 Mystery solved! The actress teased her role as Ivanka earlier this month when she shared a picture of herself going over her lines while wearing a wig cap. 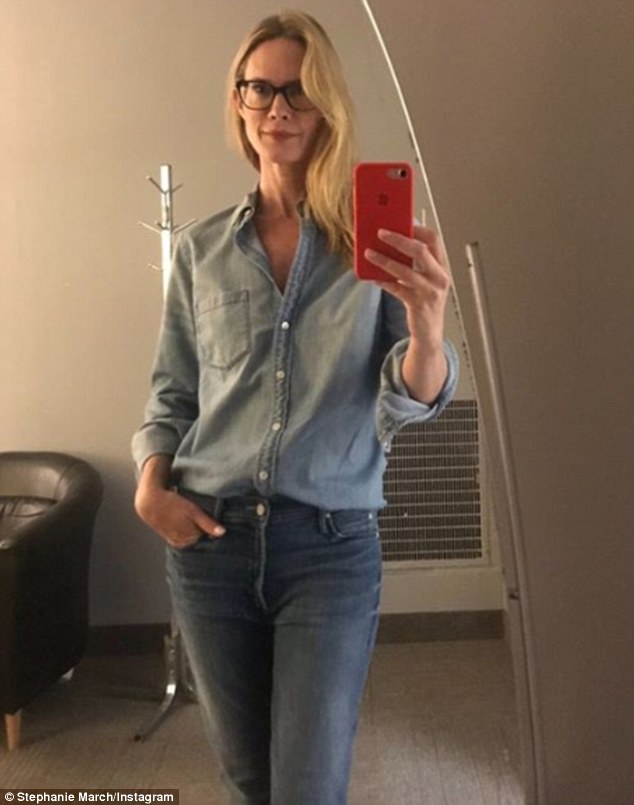 Early bird: Stephanie, who documented her transformation on Instagram Stories, revealed she was up at 5:30 in the morning ironically, the same time the the real Ivanka wakes up 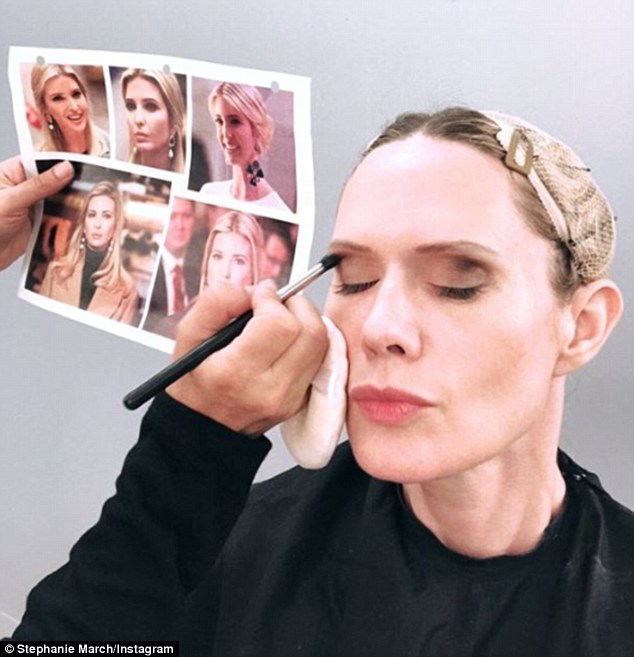 Ivanka-inspired! A makeup artist looked at a photo grid with pictures of the first daughter while giving Stephanie a smokey eye 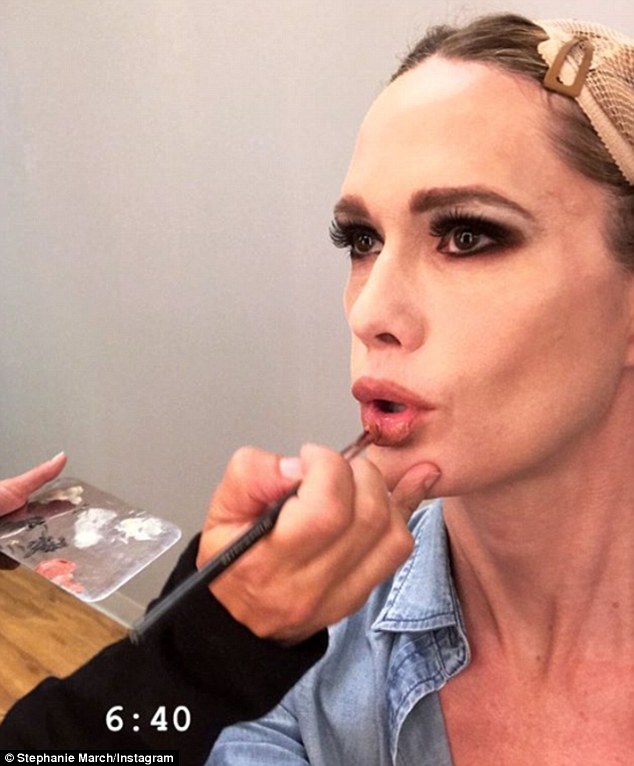 Almost natural: Stephanie was given a muted rose lip, a natural-looking shade that Ivanka frequently wears

In the next picture, Stephanie is sitting in a makeup chair with a wig cap on her head and a black cape over her clothes.

The makeup artist is holding up a photo grid with five different pictures of Ivanka while giving Stephanie an Ivanka-inspired smokey eye.

‘6:04 #ivanka in the works,’ the star captioned the snapshot.

The picture series continues with a photo of a makeup artist giving Stephanie a muted rose lip, a natural-looking shade that Ivanka frequently wears. 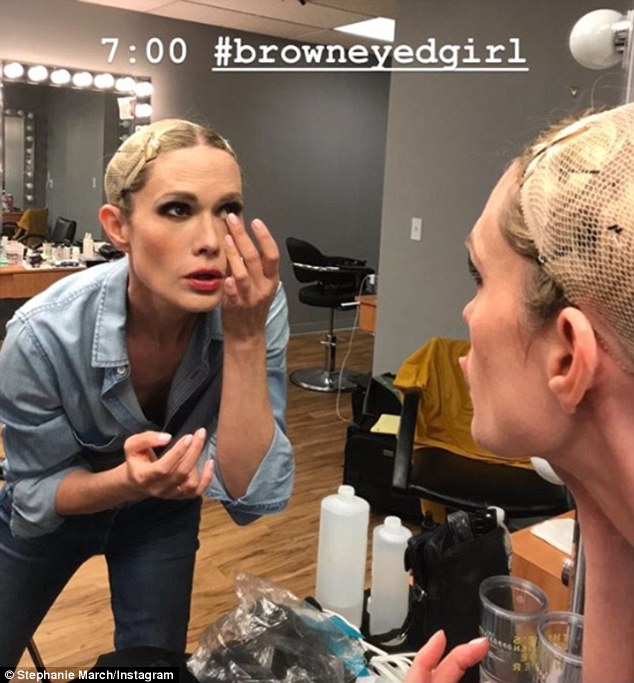 Going all the way: Stephanie had to wear brown contact lenses to cover her piercing blue eyes 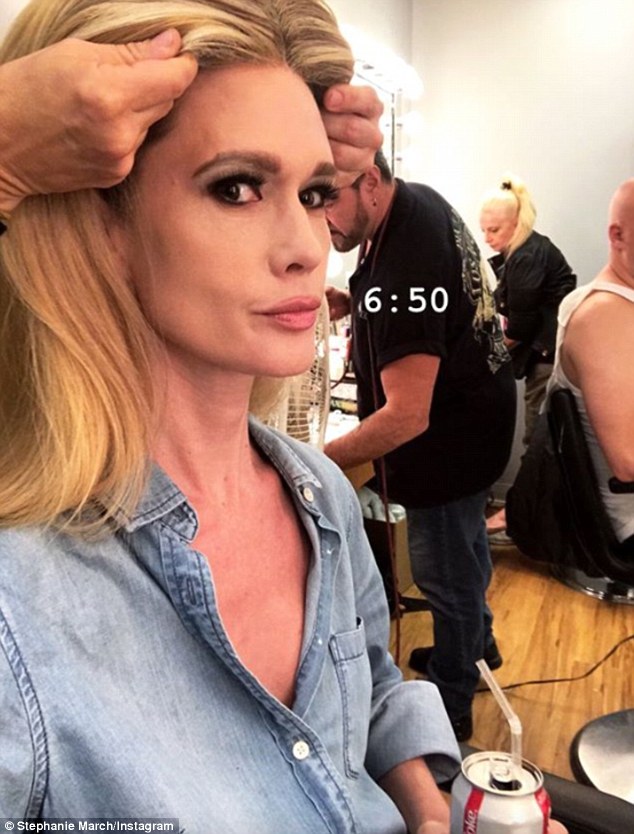 Almost there: Although Stephanie has blonde hair just like Ivanka does, she was given a voluminous wig to play the first daughter 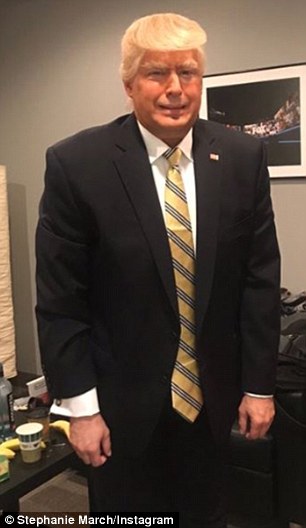 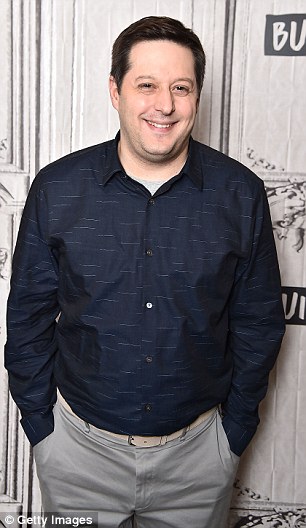 ‘This guy’: The actress posted a behind-the-scenes shot of Anthony Atamanuik in his Donald Trump getup. Unlike his character, the comedian has dark hair

Although Stephanie has blonde hair just like Ivanka does, she was given a voluminous wig to play the first daughter.

She also shared a picture of herself putting in brown contacts to cover her piercing blue eyes.

Ivanka’s eyes are naturally dark brown, but some suspect she wears contacts, as they have appeared to be green or hazel on some occasions.

Stephanie’s ‘prop’ was a large pearl cocktail ring, and when it was all said and done, she looked just like Ivanka.

The actress also couldn’t resist sharing a picture of Anthony Atamanuik in his Donald Trump getup, writing: ‘This guy.’ 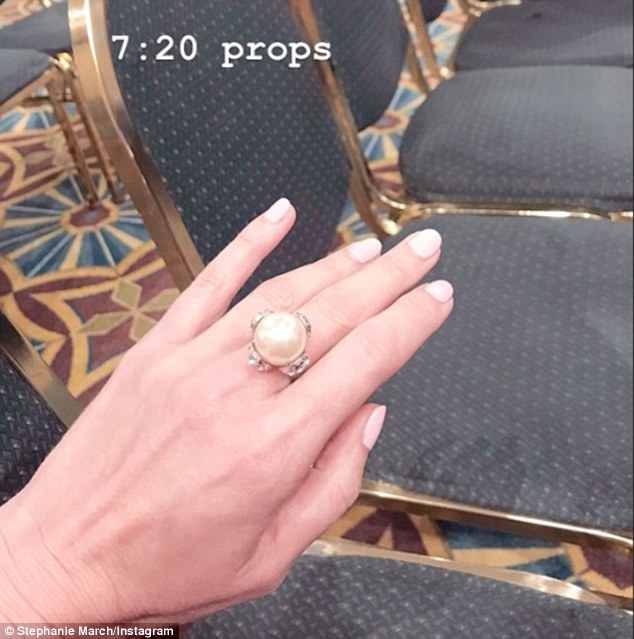 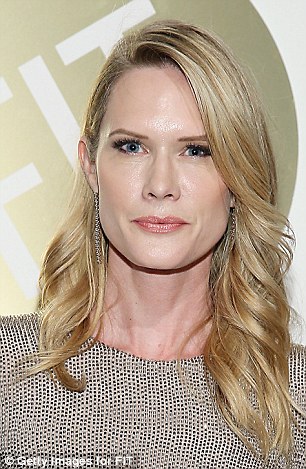 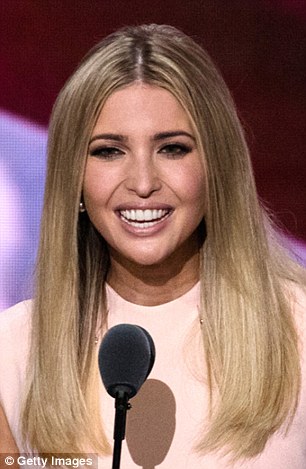 Lookalikes? Stephanie and Ivanka both have highlighted blonde hair and almond-shaped eyes 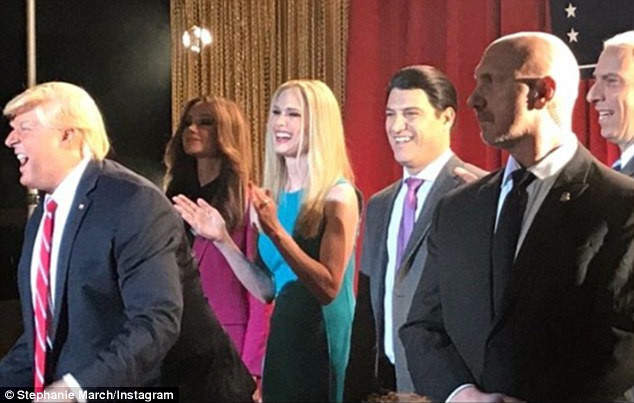 In character: Stephanie ended her Instagram Stories with a snapshot of herself wearing a teal dress while on stage with her co-stars 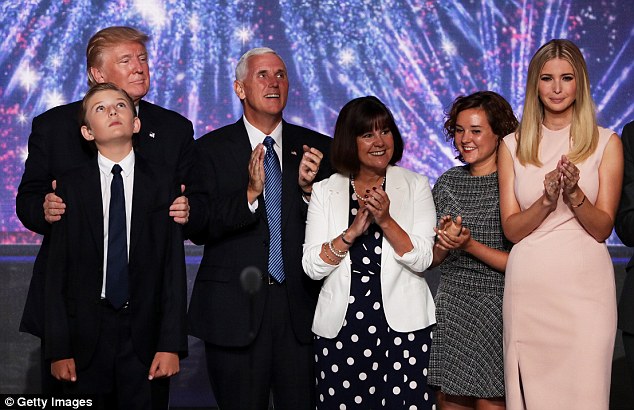 Throwback: The picture looks similar to one of Ivanka on stage with father and Vice President Mike Pence at the 2016 Republican National Convention

At 8:03 a.m., she snapped a photo of her completed transformation, explaining she was ‘trying to stand very, very still’ so she wouldn’t ‘ruin their hard work.’

Stephanie ended her Instagram Stories with a snapshot of herself in a teal sheath dress, similar to the ones Ivanka has worn in the past.

In the picture, she is on stage with Anthony as well as Peter Grosz, and Adam Pally, who play Vice President Mike Pence and Donald Trump Jr., respectively.

The fully scripted half-hour special, which debuts on October 22, is set in 2030 and looks back at the fall of the Trump administration through the eyes of its members.

Other stars of the show include Kathy Griffin as Kellyanne Conway, Mario Cantone as Anthony Scaramucci, and John Gemberling as Steve Bannon.