They had dated for 11 months, with their relationship recently coming to an end and the couple locking horns over ‘cheating’ claims.

But it seems Stephen Bear and Charlotte Crosby could be rekindling their tumultuous romance once more, as the pair were spotted having crisis talks on Tuesday.

It’s been claimed the pair have spent the last two nights together in a Newcastle hotel, just three days after former Geordie Shore star Charlotte had vowed ‘never to get back’ with her reality ex-beau and Bear was spotted leaving a nightclub in Essex with a mystery brunette.

Back on again? Charlotte Crosby, 26, is reportedly in crisis talks with ex-beau Stephen Bear over their on/off 11 month relationship following their recent split

According to The Sun, Bear has travelled up to Newcastle to reunite with his ex-flame and the duo have spent the last couple of night together at the Malmaison hotel to discuss their future.

While Charlotte had reportedly been keen to keep the pair’s reunion under wraps, Bear appeared to give away his appearance by parking outside of the hotel, a move that left him slapped with parking fines, in his car that boasts a personalised number plate.

A source close to the couple told the paper: ‘Charlotte is madly in love with Bear, but she needs to know she can trust him.

‘She told him if they’re going to make it work, then they have to give it their all. No more mini break ups or taking time apart – it’s all or nothing.’ 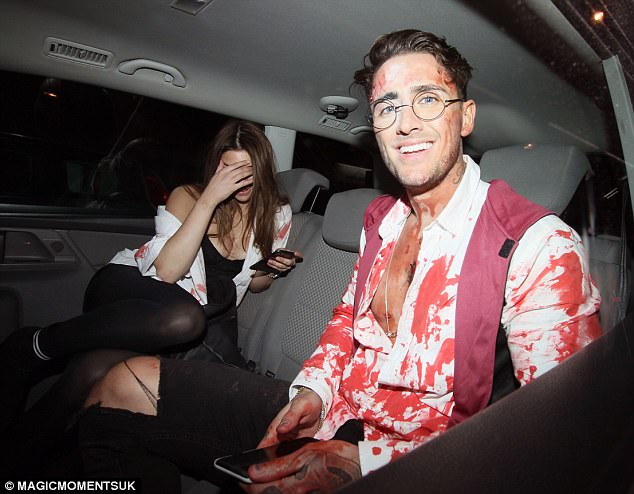 Awkward: Bear has reportedly spent the last two nights in Newcastle with his ex to discuss their future – just three days after being spotted with a mystery girl following a night out 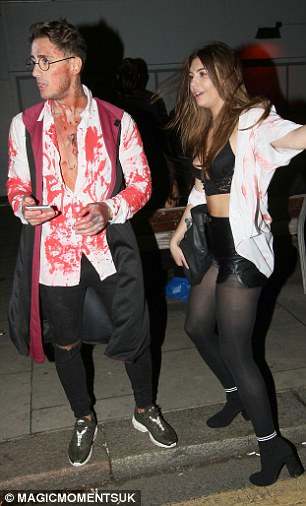 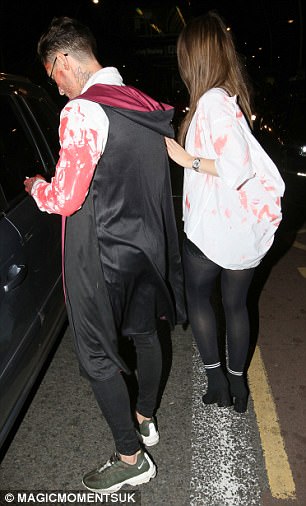 Embracing Halloween: The former Celebrity Big Brother winner was seen leaving Faces in Essex with the brunette in tow 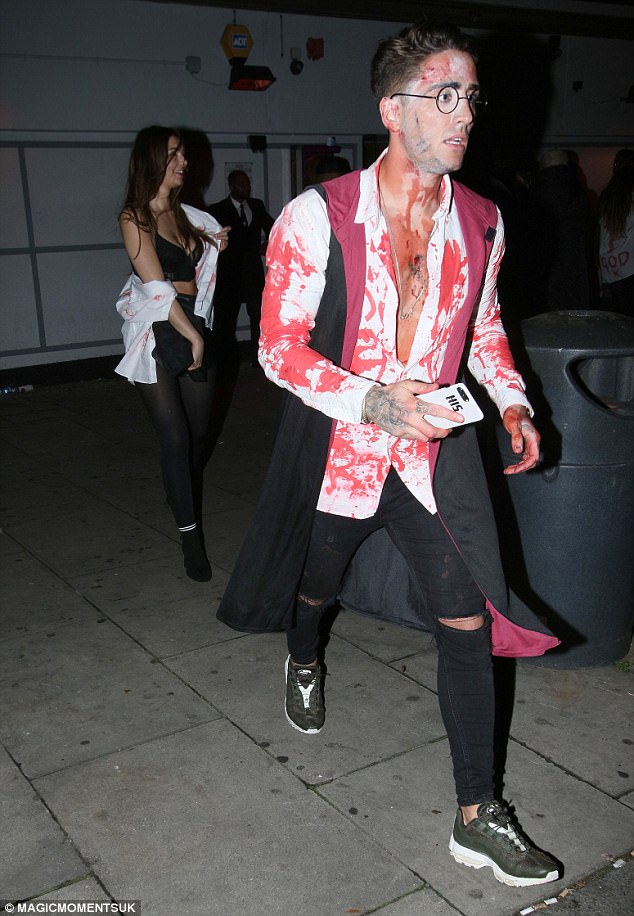 Getting into the role: Bear donned face paint and round-framed glasses for his night out 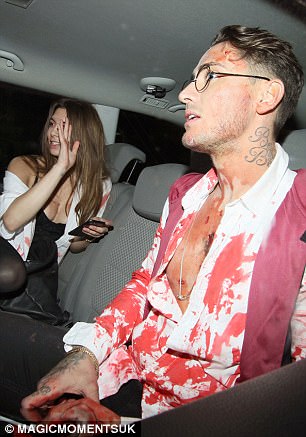 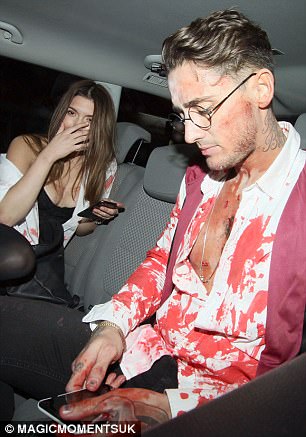 Heading home? He was seen leaving the nightclub with a brunette, as they clambered into the same taxi together 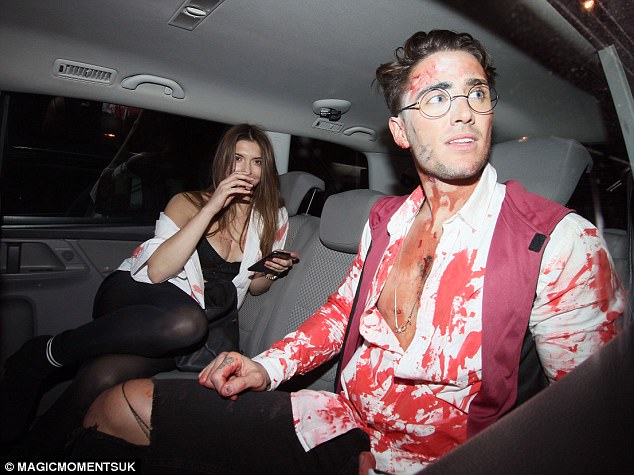 Not so subtle exit: Bear, meanwhile, wasn’t fazed and was seen looking in the direction of photographers as he sat in the back of the car with the brunette

MailOnline have contacted representatives for both Charlotte and Bear.

Representatives for the duo had confirmed Charlotte and Bear’s split recently, with the duo later seen clashing over ‘cheating’ claims. Ex On The Beach star Bear was spotted kissing another girl in a nightclub days within just 48 hours of partying ways with Charlotte.

He was later accused of ‘cheating’ on the starlet on social media, but vehemently denied the claims and insisted he had done nothing wrong as he and Charlotte had split up. His family had vocally shown their support for him on Twitter, with Charlotte later defending her ex-flame and insisting he didn’t cheat, but vowing ‘never to get back with him’. 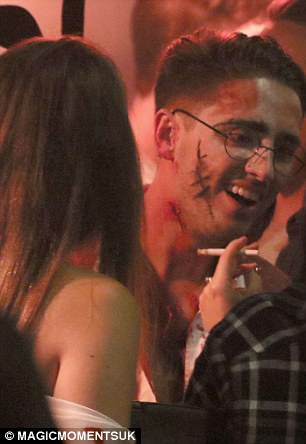 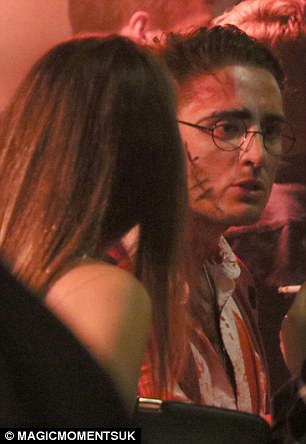 Newly single: Bear was seen chatting with a number of females inside the venue 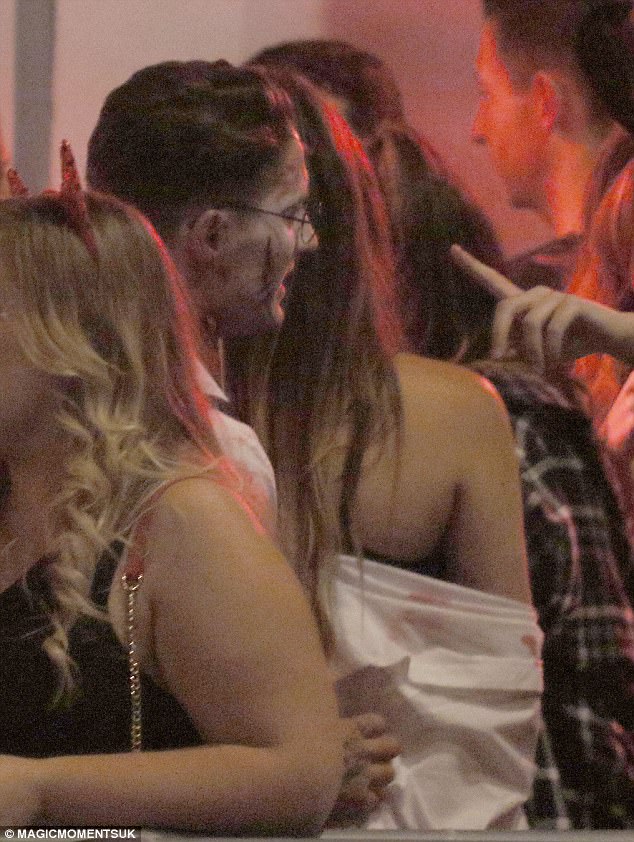 Close: Bear was seen cosying up to his companion inside the bar 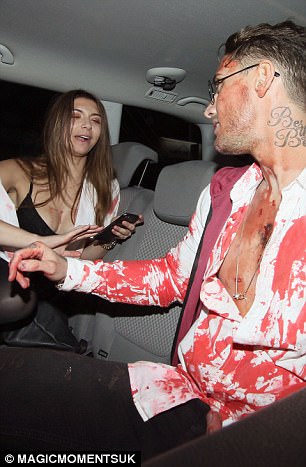 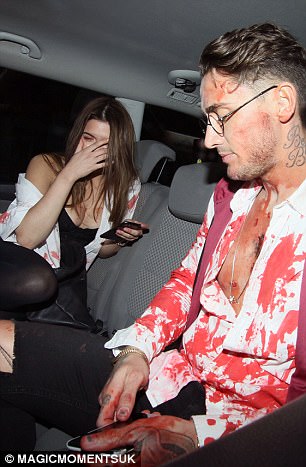 Something funny? He appeared to make the girl laugh as they shared an exchange in the back of the taxi 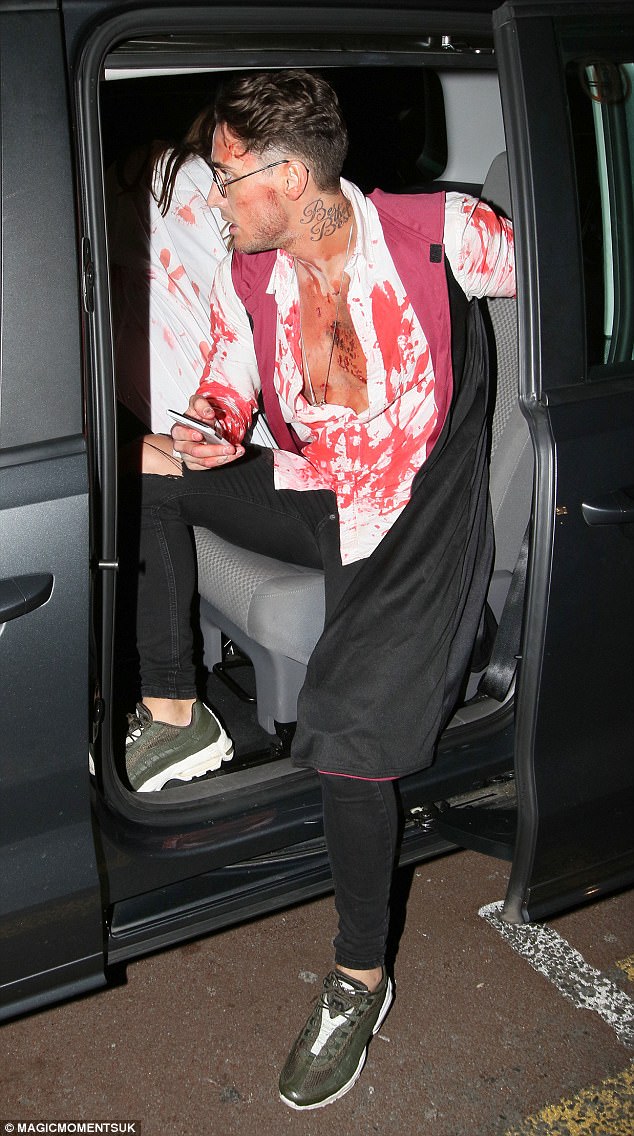 Drama: His appearance with the brunette is the latest in a string of nights out that have seen the reality star linked to a bevy of beauties – including one girl who he was alleged to have ‘cheated’ on Charlotte with in the wake of their split

News of their reported ‘crisis talks’ comes as pictures emerged of Bear heading into a taxi with a mystery brunette just three days ago, following a Hallloween-themed night out at Faces nightclub in Essex.

The former Celebrity Big Brother winner was dressed as a bloodied Harry Potter and was pictured sporting round-framed glasses, along with a stained white shirt, Hogwarts cape and ripped jeans.

He was seen leaving the venue and heading into a taxi with the mystery girl, who too appeared to embrace the Halloween spirit. The duo were seen putting on a cosy display inside the club, before leaving together. 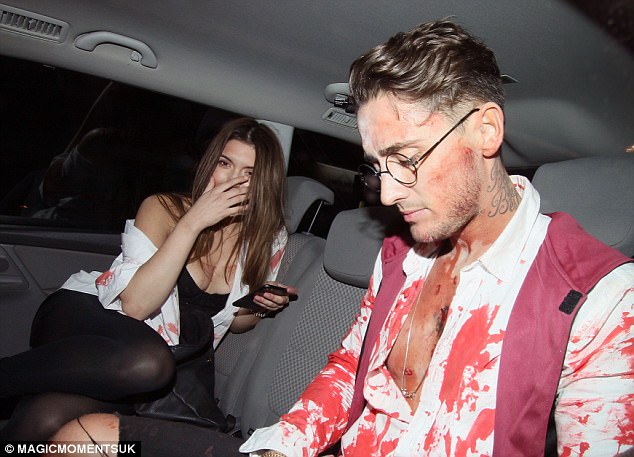 Defiant: He was pictured ‘kissing’ the girl during a night out, but Bear has insisted he hadn’t been unfaithful, as he had been single at the time having already split from Charlotte 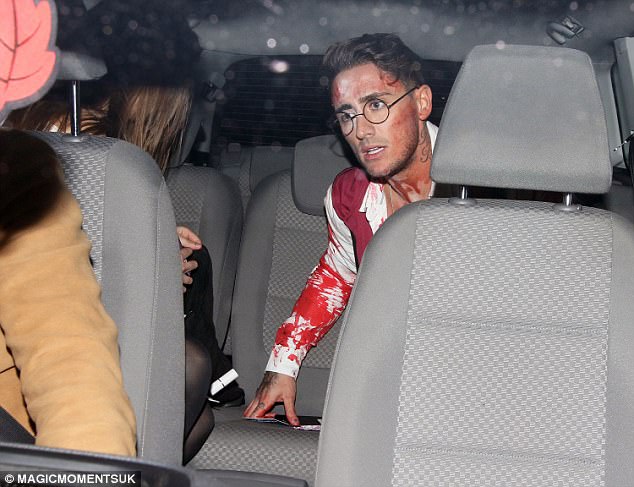 Support: Bear’s family had jumped to his defence following the infidelity claims, with Charlotte later insisting Bear hadn’t been unfaithful despite her first thoughts

Bear was pictured sitting in the backseat of the taxi with the brunette, who appeared in high spirits as she spoke with the star. Coming over coy, she attempted to cover her face with her hand, with Bear flashing a smile in the direction of photographers and pictured placing a hand on her knee.

MailOnline have contacted a representative for Bear.

His appearance with the brunette is the latest in a string of nights out that have seen the reality star linked to a bevy of beauties – including Yasmin Wells, 22, who he was alleged to have ‘cheated’ on Charlotte with in the wake of their split and has since been embroiled in a war of words with.

Bear has insisted he hadn’t been unfaithful, as he had been single at the time having already split from Charlotte. Yasmin, the girl at the centre of the row, meanwhile, has insisted she did not kiss Bear, but confessed he had made a move on her and claimed he and Charlotte had split two weeks previously. 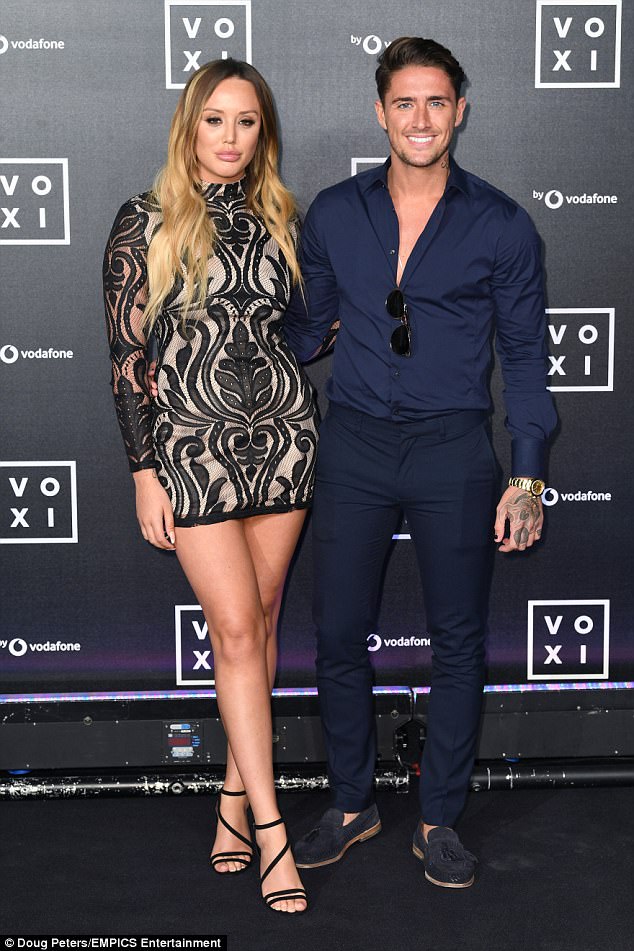 Over for good? Charlotte had insisted at the same time that she would ‘never’ get back together with Bear following their second split in three months

She told The Sun: ‘I met Bear at Faces – I was out celebrating my 22nd birthday with my friends. He turned up around 10.30pm with his mates and came up to me and asked: “What’s your name?”

‘I did not kiss him – and I’m definitely not dating him. He’s much too in the public eye for me – my phone’s been going off all day and it’s been driving me mad’.

Of him chatting to other girls about their split, she weighed in: ‘(It’s not really right, no), but some of my friends spoke to him and said he wasn’t with Charlotte, apparently they haven’t been together for about a week.’

Bear’s family had jumped to his defence following the infidelity claims, with his brother Danny responding via Snapchat. He filmed his wife looking at her phone as she remarked: ‘Stephen’s cheating on Charlotte apparently.’

Danny responded: ‘What I wanna know is, how can you cheat on someone when you’re not with them? And you dumped them days ago. Last time I checked that weren’t cheating. Anyway. True.’ 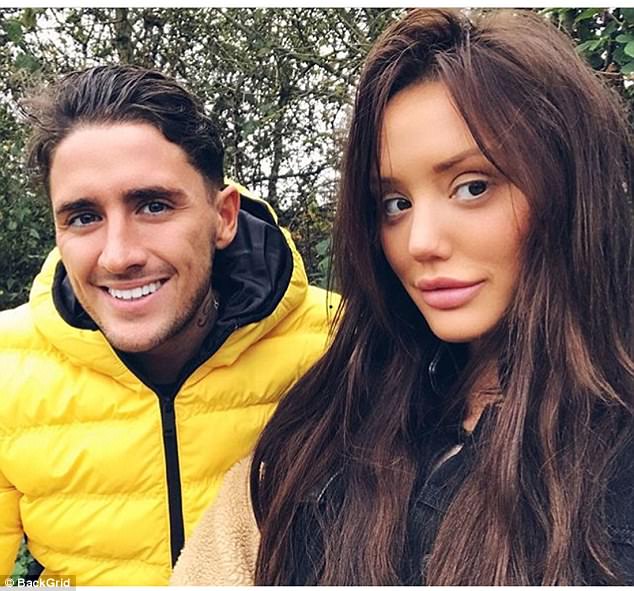 Locked horns: After the initial news of the pair’s break up, Charlotte accused her former beau of kissing another girl in a nightclub in a barrage of angry tweets

Meanwhile, Bear’s sister-in-law Cassie also defended the CBB winner on Twitter, replying to fans: ‘P****s, they weren’t even together – he finished with her 4 days ago.

She added to another follower: ‘It’s not taking sides wally – it’s fact. He dumped her days ago. Pure and simple – he’d had enough love.’

Charlotte and Bear split on Friday after a turbulent relationship, with Charlotte accusing her former beau of kissing another girl in a nightclub in a barrage of angry tweets.

She penned: ‘WOW… I can’t believe stuck by someone for so long…for it to take 48 hours for them to be necking on with someone in a club.

She continued: ‘In front of everyone’ followed by applause emojis, with her last tweet stating: ‘When you try and tell everyone someone is different and you have their back through and through. And they go and prove you wrong.’ 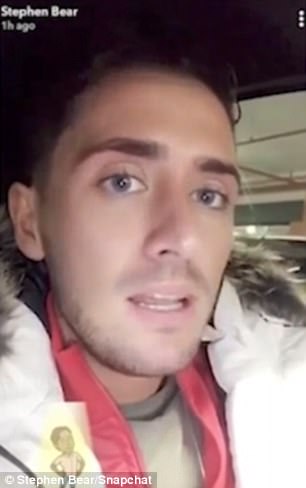 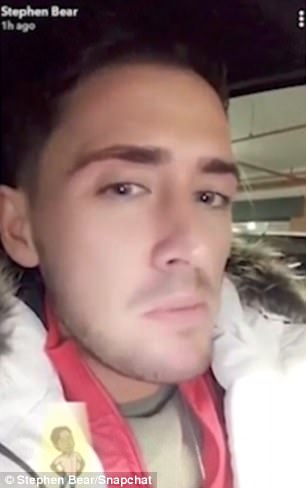 Hitting back: Bear demanded an apology from fans who accused him of infidelities, claiming that since they had already split up he had done nothing wrong 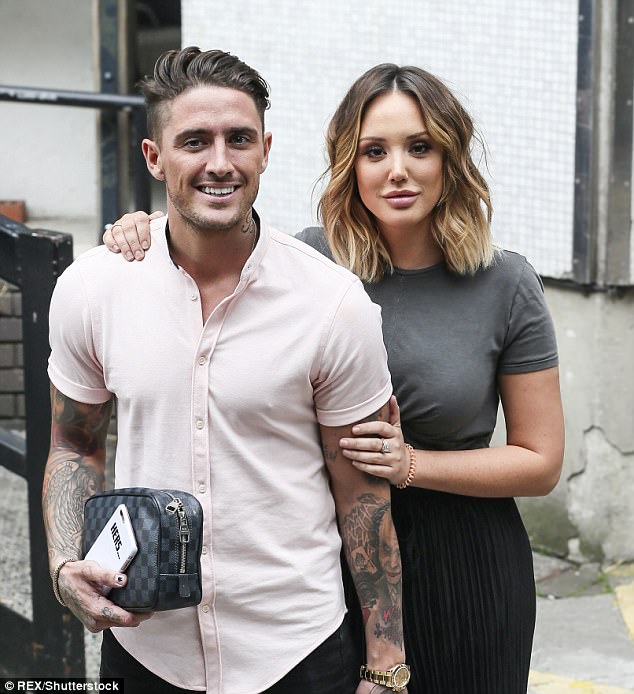 Tumultuous:  It’s not the first time she and Bear have parted ways, as Charlotte had previously announced that Bear had dumped her back in August in an emotional video she shared on social media

Bear, however, demanded an apology from fans who accused him of infidelities, claiming that since they had already split up he had done nothing wrong.

The 27-year-old reality star made the declaration in a scathing Snapchat video, declaring that he was free to do what he wanted after being the victim of a slew of angry messages from fans.

The Celebrity Big Brother winner said: ‘When you break up with someone, and you’re not with them, you can do what you want, where you want because it’s no one’s business. Everyone’s saying I’ve cheated, I’m the worst person in the world blah blah blah, but the facts are we’re broken up for two days, after that, I can do what I want, I’m single.

‘Lastly, there’s two sides of every story. If I was together and I done something, granted it’s a liberty. But it’s not the case, you can ask her yourself, it’s not the case. So I think I deserve an apology.’

Charlotte has since insisted Bear didn’t cheat on her in a conversation with her former Geordie Shore co-star Nathan Henry, but did vow never to rekindle her relationship with the MTV star and her Just Tattoo Of Us co-host. 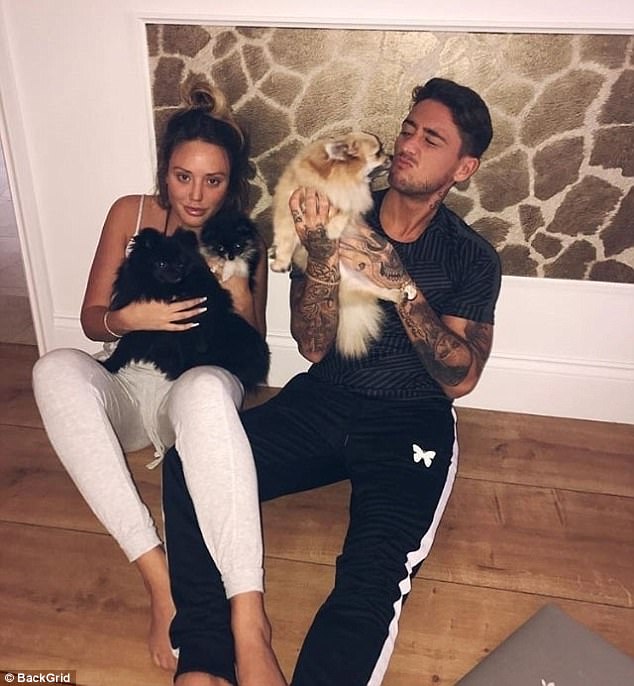 Confusing: Hours after her video, Charlotte claimed she had been a ‘drunken d**k’ and insisted they were still together – but just a week later Bear seemed to reveal they had split again

Nathan had filmed Charlotte on his Snapchat where she was seen tucking into some post-boozing snacks, as he said: ‘Why would anybody in this world cheat on her?’

Quick to defend her ex, Charlotte insisted: ‘No, he didn’t cheat’,’ whilst Nathan shot back: ‘Well he did.’

Seeming to reflect on the whole incident, Charlotte then conceded: ‘Right, well he might as well have cheated,’ before agreeing with Nathan’s sentiments that she would ‘never be his again’.

It’s not the first time she and Bear have parted ways, as Charlotte had previously announced that Bear had dumped her back in August in an emotional video she shared on social media.

In the video she stated: ‘I love Stephen so much but when someone is so selfish to always put themselves first not even care about the little things that you ask them to do that are so important to you it just makes you question whether they care at all.

Just hours later Charlotte claimed had been a ‘drunken d**k’ and insisted they were still together.

One week after this first breakup, Bear then announced that the pair had parted in a tweet, saying: ‘Sadly me and Charlotte have split up. We have had a good run but we wasn’t right for each other (sic).’

Fans were left baffled about the pair’s relationship status, but Charlotte and Bear confirmed that they were still together at the beginning of October.