Mel B is a ‘drug addict’ and a ‘narcissist’ says her own mother, according to shocking emails ex-husband Stephen Belafonte claims he has in court filings.

According to newly filed court documents obtained by DailyMail.com, Belafonte, 42, claims to have ‘dozens of emails’ from Mel’s mom Andrea Brown in which she attacks her famous daughter for her alleged drug use.

He claims Mel’s drug and alcohol addiction was so bad that she would be ‘falling down drunk, walking into walls in the middle of the day or unable to wake up to catch a flight,’ according to the legal paperwork.

And Belafonte says he even has video footage of the America’s Got Talent judge trying to urinate on the couch because she was so drunk, according to the documents.

During the alleged incident, which has previously been reported, Mel apparently was unable to wake up and at times appeared to be ‘near death….and being so drunk that her daughter, Phoenix, and the children’s nanny had to carry petitioner upstairs to her bedroom,’ the papers state.

Shots fired: Stephen Belafonte has claimed Mel B’s alleged drug and alcohol addiction was so bad she would  ‘falling down drunk, walking into walls in the middle of the day’ 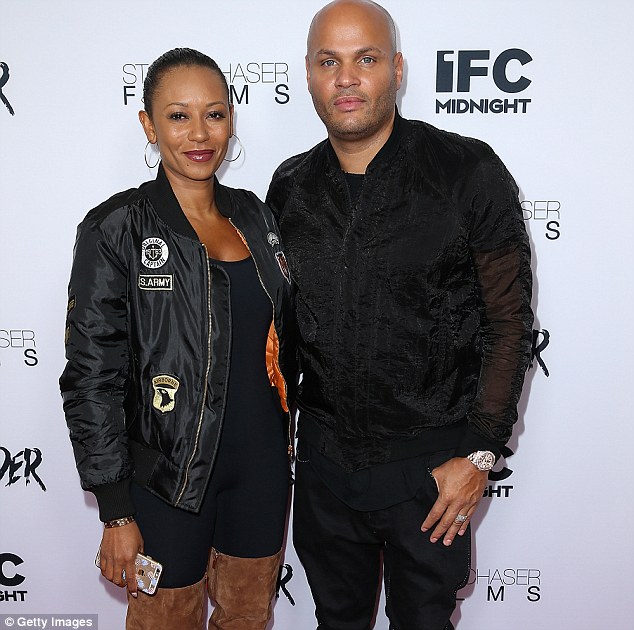 The warring couple, whose divorce was finalized in November 2017, are back in court after the Spice Girl tried to block her ex from seeing daughter Angel

Belafonte made the fresh claims in response to an attack by Spice Girl Mel, 42, that alleged he showed gruesome videos of ISIS beheadings to her three daughters, two of whom are only 10 and six.

The producer vehemently denies the America’s Got Talent star’s shocking claim, calling it ‘a blatant lie.’

Mel B’s ‘claim that the children are scared and frightened of me as a result of these alleged videos is truly and utterly false,’ he said in a declaration to Los Angeles Superior Court.

He was given joint custody of his daughter with Mel, six-year-old Madison, and he has gone back to court to try to win step-parent rights to visit Angel, Mel’s 10-year-old daughter by Hollywood star Eddie Murphy, whom Belafonte claims ‘has called me dad since she began to speak.’

But Mel is blocking his efforts to spend time with Angel, calling him in court papers a ‘bad man’ and accusing him of being violent and abusive during their 10-year marriage. 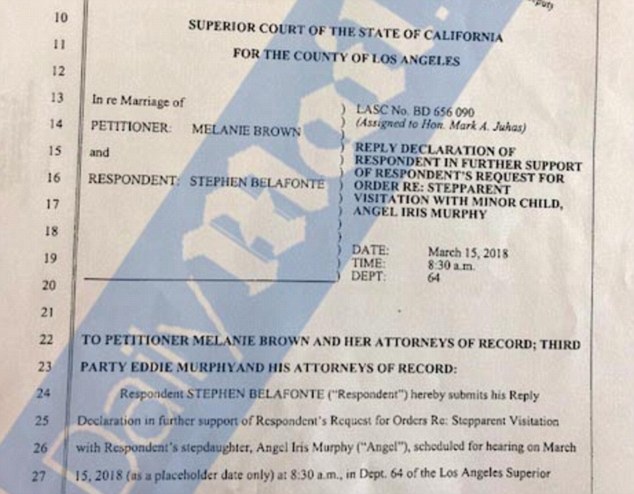 In court documents, Belafonte claimed Mel would pull ‘her pants down’ and try to ‘urinate on the couch (in the presence of the children)’

Last week she even charged in a new court filing, ‘When I was not present, Stephen thought it was funny or educational (I still do not know) to play videos of ISIS beheading individuals for Phoenix (Mel’s oldest daughter, aged 19), Angel and even Madison.’

The warring former couple will face off over the step-parent visitation issue at a hearing scheduled in downtown LA for Wednesday.

But in the meantime, Belafonte has filed his own court response with a strong denial, calling Mel’s accusation ‘outlandish and alarming’ and adding: I have never and would never show ISIS videos to our children.’

As for Mel’s allegations that he was abusive and violent during their marriage, he claims in court documents that she was addicted to drugs and alcohol and when she claimed she was hospitalized in London because of domestic violence, the real reason she ended up in the hospital was a drug overdose, the papers claim.

Belafonte claims that he pleaded in texts with Brown’s therapist, Dr Charles Sophy – the Medical Director for the LA County Children and Family Services – ‘to stop medicating and prescribing medications’ to Mel.

‘These text messages include my statements that I will not sit by to watch my wife die and me warning Dr. Sophy that Brown would become another Michael Jackson if she continued to take his prescribed medication and drink,’ Belafonte states. 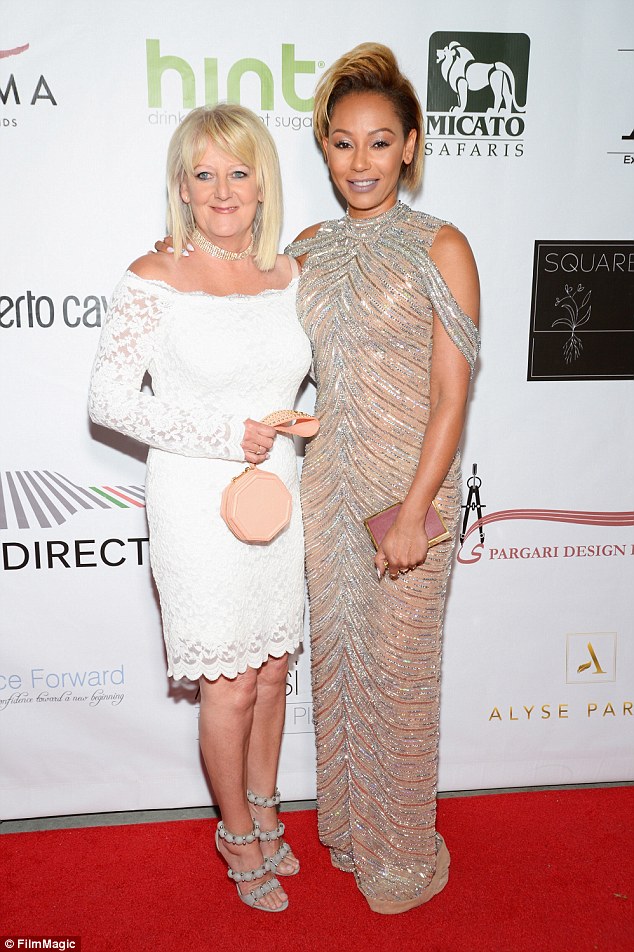 The Spice Girl’s ex also alleged to having ‘dozens’ of emails from Mel’s mother Andrea Brown, in which she called her daughter a ‘drug addict’ and a ‘narcissist.’ Mel had been estranged from her mother Andrea as well as her sister Danielle for most of her ten-year marriage to Belafonte

And he says he has video ‘of threesomes recorded by Brown herself of me and another woman wherein Brown turns the camera on herself and claims “I like it” to the camera.

In another similar sexy video, Belafonte adds, Mel ‘turned the camera on herself and stated for the camera “That’s Hot”.’

Belafonte claims to be concerned about Mel’s mental health because she’s ‘acting erratically and illogically.’

He cites an Instagram post by the Spice Girl that said, ‘The devil whispered in my ear, you’re not strong enough to withstand the storm. Today I whispered in the devil’s ear. I am the storm.’

He believes that Mel ‘is relentless on maligning me in the public eye for no good reason.’

As an example he points to an Instagram post on February 23 in which Mel writes, ‘Really? Ok when I wake up to do my school run and wow my Range Rover tires are slashed and you don’t think I now (sic) who you are, haha it’s laughable’ with the hashtags ‘#iseeyou,’ ‘#monsterdevil,’ #vbutimhappywithoutyou,’ #singlelifeprobles,’ #fakepeople,’ and #mentalabuseawareness.’ 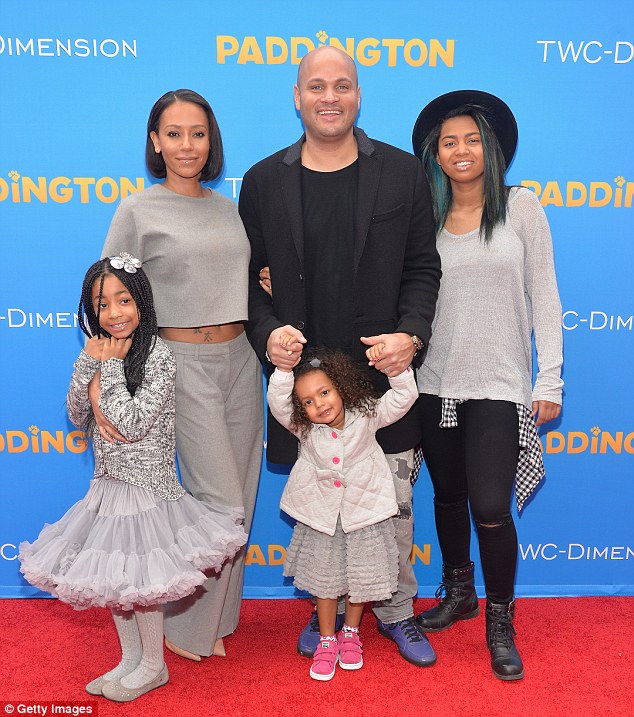 The warring former couple will face off over the step-parent visitation issue at a hearing scheduled in downtown LA for Wednesday. Pictured above is Mel and Stephen and daughter (L to R) Angel Murphy Brown, 10, Madison Brown-Belafonte, six, and Phoenix, 19

Belafonte – who also claims that Mel has been violating his joint custody of Madison (he gets her on Wednesday nights and alternate weekends) – says he’s ‘the only father figure Angel has known,’ yet Mel refuses to let him see her.

‘I strongly believe that Brown’s abrupt decision to cut off all ties between Angel and I has been emotionally traumatizing and detrimental to Angel’s mental health and well being,’ he adds in legal papers.

Belafonte says that he gave his daughter Madison a teddy bear and other toys to give to Angel.

But ‘Madison later informed me that Brown threw out the toys before they could even get to Angel.’

Mel filed for divorce from Belafonte in March last year, citing irreconcilable differences, and she took out a domestic violence restraining order against him, accusing him of years of abuse against her and of keeping her drugged during much of their marriage.

Over the following eight months lurid and intimate details were revealed about the couple’s sex life during their marriage, including three-ways with German-born nanny Lorraine Gilles.

Belafonte who accused his ex-wife of being addicted to cocaine and alcohol during their marriage repeatedly denied Mel’s charges against them and fought the restraining orders through 20-plus court hearings till, at last, the case was set to go to trial on November 9 2017.

But at the 11th hour the former couple reached a private settlement and Judge Juhas dissolved the domestic violence restraining order.

The divorce became final on December 15 with Mel agreeing to pay Belafonte $15,000 a month in spousal support until December 2020.

Mel had been estranged from her mother Andrea as well as her sister Danielle for most of her ten-year marriage to Belafonte.

However in May last year she shared a colorful photo of her mother and three daughters Phoenix, Angel and Madison to Instagram – marking the first time the mother-daughter duo had been pictured in over a decade.

Then in September she appeared on the red carpet with Andrea at the 2017 Face Forward Gala in LA.