STEPHEN GLOVER: Britain is determined to have its sovereignty back, come what may

Why don’t they get it? Why can’t European leaders understand that when Britain leaves the EU on December 31, it will be intent on being a sovereign independent state?

That Europe hasn’t grasped the point can scarcely be doubted. France pushed for unchanged rights to fish in British waters, and has only recently backed down a little.

Supported by other leaders, President Emmanuel Macron wants an independent Britain to obey future EU regulations — and be fined if it doesn’t.

Do they expect Boris Johnson to cave in during the next 24 hours? If so, they are tragically mistaken.

Last night it was revealed that he will travel soon to Brussels to meet the President of the European Commission, Ursula von der Leyen.

A telephone conversation between them yesterday afternoon produced no breakthroughs.

A deal will necessitate compromise on both sides — the Government yesterday offered to pull contentious clauses from the Internal Market Bill — but the Prime Minister will be a political carcass if he accepts the EU’s vision of Britain as a satellite state.

It was ever thus. Many European leaders, as well as the unelected bureaucrats of the Commission in Brussels, have consistently underestimated the strength of Euroscepticism in Britain.

In the first place, they doubted that any government would give the British people the choice to withdraw from the EU.

No other European country had ever given its voters the option to leave the organisation.

After David Cameron promised a referendum if the Tories won the 2015 election, he was told he was ‘stupid’ by Donald Tusk, then President of the European Council.

Mr Cameron did not, of course, want Britain to leave the EU. Before the 2016 referendum, he toured Europe’s capitals, begging for concessions on unfettered EU migration to our shores, and was offered almost nothing. He duly lost the vote.

In common with the British political establishment, Brussels was shocked when an unprecedentedly large number of voters rejected European Union membership, albeit by a fairly narrow margin.

European leaders were nonetheless reluctant to accept the result. Tusk frequently expressed his regret that Britain was deserting the organisation — and the hope that it would return to the fold.

Jean-Claude Juncker, then President of the European Commission, spoke in similar terms.

As negotiations with the hapless Theresa May ground on — she allowed the EU to set the agenda and to pocket a down payment of £37 billion by Britain before talks on a trade deal had even begun — Joseph Muscat, Prime Minister of Malta, suggested we hold a second referendum.

Meanwhile, Remainer MPs were forever popping over to conspire in Brussels, giving the likes of Tusk and Juncker reason to hope that, if the result of the referendum couldn’t be overturned, at least it could be neutered.

Then, almost exactly a year ago, everything changed on the British side when Mr Johnson won a stonking majority. 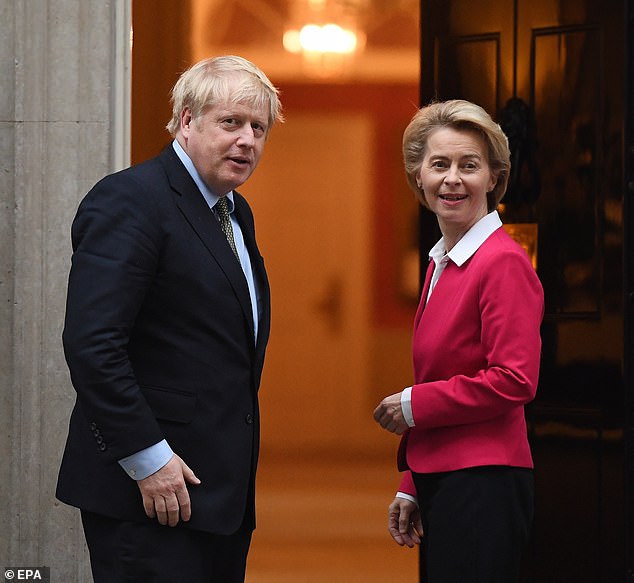 To the consternation of Brussels, he insisted that trade talks must finish by the end of this year. Britain is leaving in 23 days.

But many of Europe’s leaders and bureaucrats still don’t get it. Hours before a deal must be signed, if there is to be one, they apparently think Britain should continue to be treated as a second-class nation, accepting diktats from Brussels after we depart.

Would an independent France — if such an entity were to exist again — accept that neighbouring countries could fish in its waters at will, or that it should be bound by future EU regulations, or that it should abide by the judgments of the European Court? I very much doubt it.

Why, then, can’t the insufferably cocky President Macron and other European leaders comprehend the impossibility of Mr Johnson accepting their humiliating and unrealistic demands?

The Irish foreign minister may be right in saying 98 per cent of a deal is agreed, but there are huge gulfs in the remaining two per cent.

The old inability to appreciate the determination of the British Government to achieve true independence — unquestioningly enjoyed by countries such as Australia and Canada with much smaller populations than the UK’s — persists at five minutes to midnight.

And there is also an enduring desire to punish Britain for having had the effrontery to leave an organisation that has an almost sacred status in the minds of the European political class.

It seems not to matter to them that, in attempting to penalise and hobble us, they risk harming their own citizens.

No Deal would have disastrous consequences for the German car industry and thousands of its employees. The Irish economy might suffer even more than Britain’s.

But these are costs which may have to be borne — by European workers, not well-padded European leaders — in defence of dogma.

The most zealously held tenet is that a country which leaves the EU can’t be allowed to prosper outside it.

For what might be the consequence if post-Brexit Britain thrives? The peoples of several European nations which have suffered as a result of the hegemony of Brussels would also cry for their independence.

The Italians, whose sclerotic economy has been crushed by its 20-year membership of the euro, could look to Britain’s example.

They might realise that life outside the EU is not only possible but preferable.

That is the nightmare for European leaders, and it explains why, in their view, burdens must be placed on Britain even if the upshot is No Deal, which will hurt ordinary Frenchmen, Germans and Dutch.

All one can say is that an organisation truly confident of its superior arrangements wouldn’t set out to handicap a former partner in this fashion.

The punishment beatings which Brussels wants to inflict indicate the fragility of the EU project.

A secure club, sure of its innate attractions, would wish a departing member well, and undertake to do everything in future that was conducive to mutual advantage.

So in a way I’m heartened by Brussels’ churlish approach, epitomised by its rigid chief negotiator, Michel Barnier.

Remainers assert we are leaving a robust organisation, and will find life by ourselves hard going. I suggest the EU is weaker than it looks, and we are stronger than its elite believes.

But I still hope for a last-minute leap of imagination on the part of the EU. This is partly because I don’t doubt that No Deal would be painful for Britain in the short term.

It would be deeply undesirable for Europe to be at odds with its leading military power and natural ally, which in the lives of our parents and grandparents stood alone, and provided the springboard for the liberation of the continent.

Gratitude may be too much to expect from the European political class 75 years after the end of that draining war, though perhaps not too much from European people with longer memories.

Some recognition of reality is necessary, though. This country is embarking on a new path. That can’t be stopped.

Only hours remain, but how much better if Europe and Britain can avoid poison and recrimination, and go on living together as friends.

By travelling to Brussels Boris Johnson is going as far as he can. The question is whether the European Union truly grasps — at long last — that Britain is about to become a sovereign and independent state again.