STEPHEN GLOVER: I smell a sell-out more putrid than a bad kipper

British fishermen were undoubtedly the greatest victims of our membership of the Common Market in 1973. So desperate was Ted Heath, the then Conservative Prime Minister, to join the bloc that he high-handedly betrayed their interests.

Suddenly our fishermen were forced to share the most plentiful fishing grounds in Europe with their continental counterparts. It wasn’t long before foreign boats were taking more fish from British waters than our own vessels.

Over the past 45 years the annual catch of our fisherman has roughly halved, and once-thriving fishing ports such as Hull and Grimsby have fallen into decline.

So for many people — not just fishermen — one of the boons of Brexit was regaining control of our territorial waters. These will extend, once we recover our sovereignty, 200 miles from the British coastline, or the mid-point between nearer countries such as France or Ireland.

Over the past 45 years the annual catch of our fisherman has roughly halved, and once-thriving fishing ports such as Hull (pictured) and Grimsby have fallen into decline.

Though I have never set foot in a trawler, the prospect that these waters would again be British, and that our boats could fish in them under British laws, was certainly one of my motivations for voting Leave.

The UK fishing industry employs tens of thousands of people, and has a totemic significance which only foolish politicians ignore.

That is why I trembled for Theresa May when earlier in the week the Government agreed that during the so-called transition period from March 29, 2019, until December 31, 2020, Brussels will continue to control our fish.

In fact, the situation will be worse than at present. At least we currently have a seat at the table. After March next year — when we supposedly leave the EU, though in many ways we won’t — Brussels will continue to set our fishing quotas (what we are allowed to extract from our own seas) while merely consulting us.

Should we be alarmed? Not if the arrangements during the transition period simply last for 21 months before we get back control of our own waters such as we enjoyed before 1973.

Admittedly it will be irksome to remain under the thrall of Brussels while no longer a member of the EU and without representation. But I think most people would accept such a state of affairs if they knew it was short-lived.

The trouble is there are good reasons for suspecting that the European Commission will wish to have a significant say over our territorial waters after the end of 2020. And I’m afraid there is also cause to fear that the Government will give it to them.

We should ask ourselves why Brussels is so keen on maintaining the status quo during the transition phase. It is because it wishes to negotiate shared rights to our fishing grounds. This would be well-nigh impossible if we took back control the moment we left in March 2019.

That the EU regards our waters as an enduring common asset can’t be in doubt. Donald Tusk, president of the EU Council, recently said: ‘In fisheries, reciprocal access to fishing waters and resources should be maintained.’ That implies no change.

Such an agreement would hugely favour the EU. In 2015 the vessels of other member states (principally France, Spain, Denmark, Ireland, and the Netherlands) caught 683,000 tonnes of fish (with a revenue of £484 million) in UK waters. Foreign boats take about 80 per cent of the catch in our still abundant fishing grounds.

By contrast, British vessels caught only 111,000 tonnes (£114 million revenue) in member states’ waters. This means that their fishermen are getting a lot more out of us than we are of them.

In other words, keeping things more or less as they are — which is what Brussels wants — would be vastly more to the advantage of the EU than of the United Kingdom.

So dependent have the fleets of some countries such as France, Belgium and Ireland become on fishing in our waters that they might suffer near ruination if they were excluded.

That is why the EU chief negotiator Michel Barnier will insist on continued and unconditional use of UK waters after December 2020. The argument is that if we want access to their markets, they must fish in our waters. 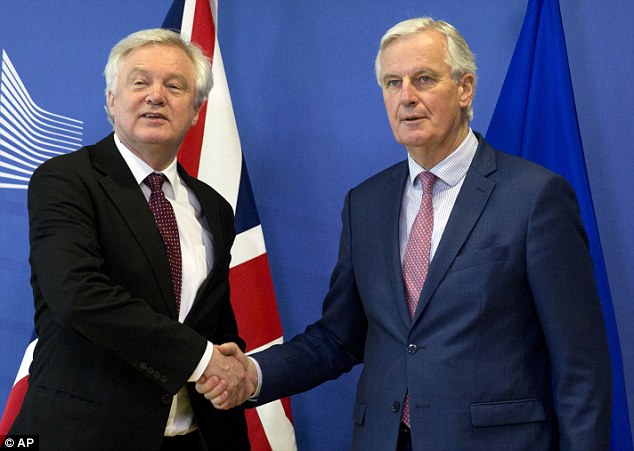 That is why the EU chief negotiator Michel Barnier (pictured with David Davis) will insist on continued and unconditional use of UK waters after December 2020. The argument is that if we want access to their markets, they must fish in our waters

Will we agree? Not long ago, Brexit Secretary David Davis ruled out ‘trading away fishing rights for other things’, while earlier this week Environment Secretary Michael Gove reassured anxious backbench Tory MPs that we will take back control of our waters when the transition period ends.

That sounds good. But the Chancellor, Philip Hammond, recently suggested it would be ‘acceptable’ to trade fishing rights in return for a better deal in lucrative areas of the economy such as the City. That sounds bad.

I can smell a sell-out more putrid than a bad kipper. Why should we be surprised if the likes of Mr Hammond and sleek Whitehall mandarins put the interests of City fat-cats before those of fishermen in far-flung parts of the kingdom?

They’ve been betrayed once before and — so the argument will run — can be betrayed again. Why bother about a few thousand fishermen when there are so many bigger issues at stake?

Let me say that such a calculation would be catastrophic for the Brexit cause, and the Government. For I repeat: the much abused fishermen, and the sovereignty of our territorial waters assume an enormous significance in millions of minds.

Woe betide the politician who is seen to sacrifice these hallowed interests in the cause of expediency. There would be political ructions, not least in Scotland. 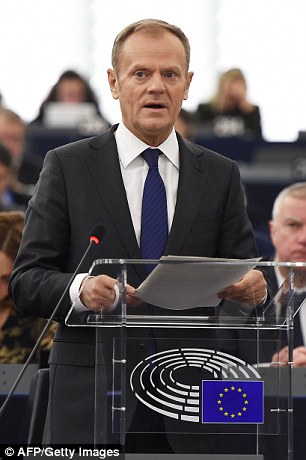 That the EU regards our waters as an enduring common asset can’t be in doubt. Donald Tusk (pictured), president of the EU Council, recently said: ‘In fisheries, reciprocal access to fishing waters and resources should be maintained.’ That implies no change

Recently elected Scottish Tory MPs in at least four fishing constituencies would probably be punished by the electorate, and the resurgent Tory Party north of the border (which has identified with the fishermen’s cause) could be wiped out. That would take care of Theresa May’s slim majority.

An idiotic Tory chief whip called Julian Smith infuriated Scottish Tory MPs on Monday by telling them: ‘It’s not like the fishermen are going to vote Labour.’ No, but they could — and would, in the event of a treacherous deal — vote for the Scottish Nationalists.

Even worse than that, a betrayal of the fishermen by cynical bean-counters in London would undermine the idealism of the Brexit cause, and make some people question the point of leaving the EU if it involves such skulduggery.

Of course we should make bilateral agreements with individual EU countries once we finally escape from the maw of Brussels, just as Norway (a member of the single market with full control of its territorial waters) has done.

But we can’t give the EU continued rights over our waters. That would lead to a reaction which would make yesterday’s demonstration on the Thames, when a few dead fish were tossed into the water, look like a garden party.

I don’t deny it’s going to be difficult for the Government to hold the line against the presumptuous claims of Brussels. Fishing rights could turn out to be as big a bone of contention as the Irish border.

I can also see that in the real world there have to be compromises along the way to arrive at a deal. But not on fishing and our territorial waters. Capitulation on this totemic issue might be fatal.