STEPHEN GLOVER: The cathedral where my father was ordained has hosted a risque catwalk show

Sometimes, in the way of many people, I ask myself what my deceased parents might have thought and said about some bizarre or unexpected development.

Yesterday was such a moment. I read in the Mail that Southwark Cathedral in London was the venue earlier this week for what sounds a rather risqué fashion show. 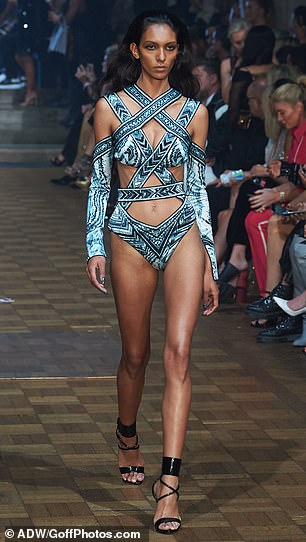 Models wearing very few clothes, and exposing generous amounts of naked flesh, pranced around as though on a Parisian catwalk. Pictured, the Julien Macdonald show 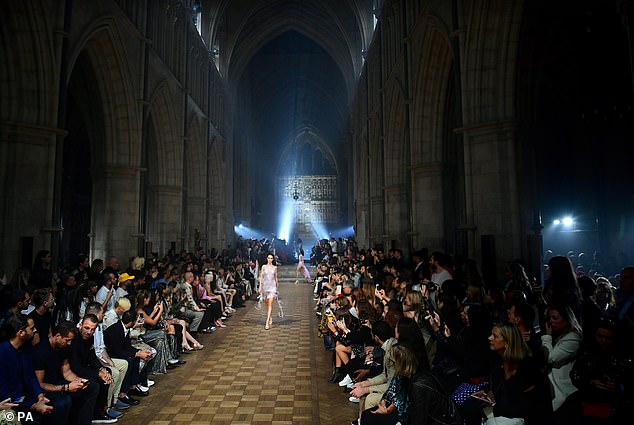 Southwark is far from being the only cathedral that has employed such tactics. Pictured, models present creations from the ‘Julien x Gabriela’ collection by Julien Macdonald

My parents would have had a view on the matter since not long before the war my father was ordained an Anglican priest in Southwark Cathedral, and they were soon afterwards married there. I’ve an old film of the occasion: lots of enormous hats.

I think my father would have been aghast to learn that what for him was a holy place of worship had been turned, albeit briefly, into something worse than a den of thieves.

But despite his sense of shock, I also imagine — he didn’t cease his priestly duties until 1978, shortly before he died — that he would have cottoned onto the motivations of the Cathedral authorities in permitting this very secular event.

He would have understood, since the trend had begun in his lifetime, that the Church of England longs to be ‘relevant’ to people’s lives, and is prepared to do almost anything, however undignified, in this endeavour. In my experience, it nearly always fails.

The faster its congregations decline, the more desperate our Established Church becomes to show that it is ‘on message’ and ‘cool’. Visitors need not worry overmuch about the sacred or divine. Heaven forbid! 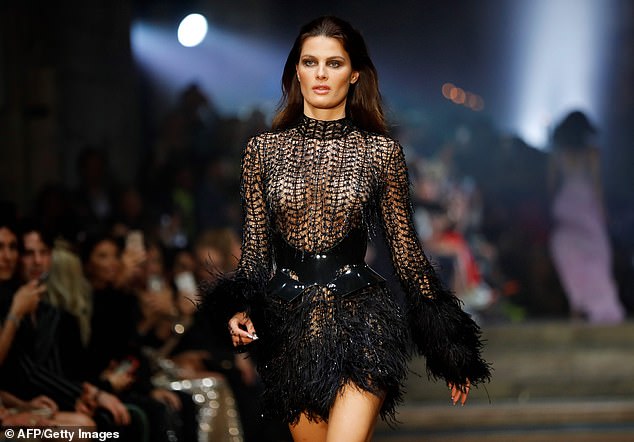 Perhaps the Dean and Chapter will try to outflank Southwark Cathedral’s half-naked models, and assay a little lap-dancing — very respectably, of course 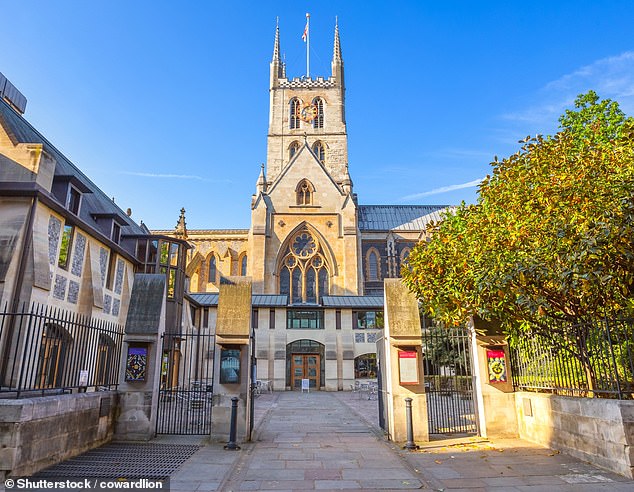 Southwark is far from being the only cathedral that has employed such tactics. A couple of months ago, Rochester Cathedral installed a crazy golf course in its nave, complete with nine holes, each of which featured a model bridge.

Before you hare off to Rochester to knock a ball around the cloisters, I should mention that this particular piece of tomfoolery is over. But I daresay there will be other opportunities.

Perhaps the Dean and Chapter will try to outflank Southwark Cathedral’s half-naked models, and assay a little lap-dancing — very respectably, of course.

Meanwhile, Norwich Cathedral hit on the novel idea of installing a helter-skelter for a few weeks during the summer. For a mere £2 a ride, visitors were able to inspect the magnificent ceiling at closer quarters before whooshing down. I don’t suppose many of them got nearer to God.

Less exalted churches are also in the business of attracting all-comers. At the racy end of things, St Andrew Holborn in London hosted an event in 2017 during which models in satanic costumes disported themselves. I don’t think they were making any kind of theological point.

A more respectable, but no less infuriating case — this is a personal beef of mine — is the Anglican Church in Venice. Recently, the ancient pews were ripped out so that this place of worship can be used for cultural events and (so its website says) ‘be part of the buzz’. 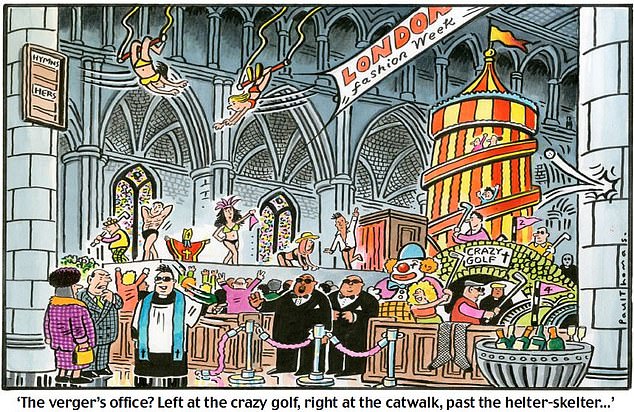 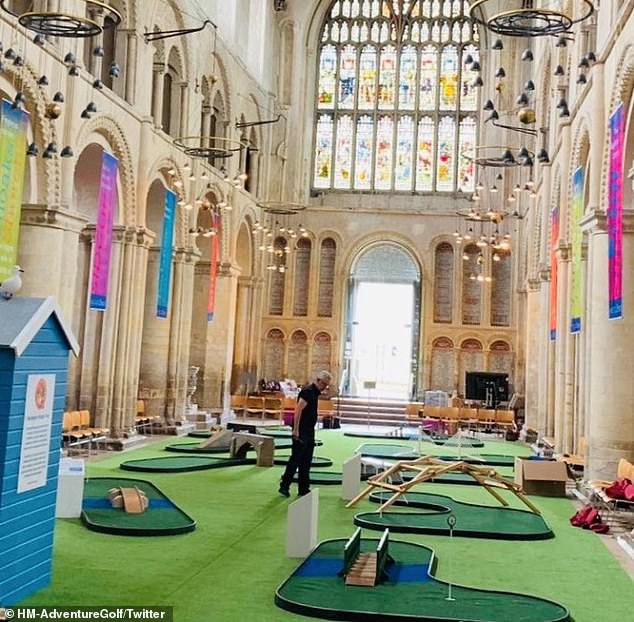 Rochester Cathedral installed a crazy golf course in its nave, complete with nine holes, each of which featured a model bridge

No sooner had the clergyman given the blessing than we were asked to stack our chairs so that tourists could have unfettered access to some garish, ill-painted pictures, which, of course, had nothing to do with religion.

Am I being cruel? I can see how challenging it must be for the Church when interest in God is flagging. According to the British Social Attitudes survey, more than half the population say they have no religion, while only 3 per cent of adults under 25 describe themselves as Anglican.

But surely there is a lesson here. A seemingly inexorable decline in church attendance has been going on for at least 50 years. Helter-skelters, crazy golf courses, scantily clad models and cultural exhibitions may draw in godless crowds, but they do nothing to bring people to God.

I would argue that the more the Church reaches towards the meretricious and the secular, the more it weakens itself, and undermines the sense of the sacred — which is what many people still yearn for.

It is as though the Church of England, finding itself in a world in which people care less and less about God, has lost confidence in its ability to preach and exemplify the Christian gospel. 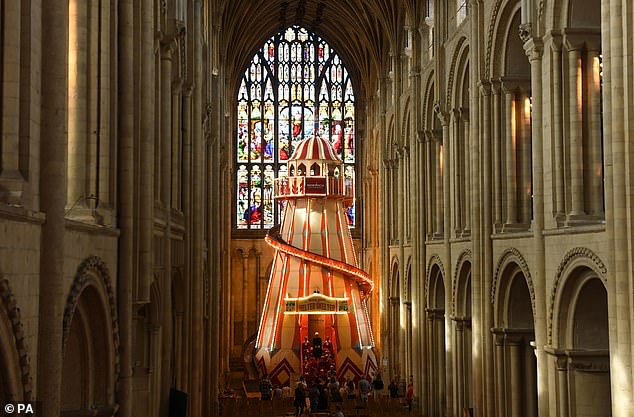 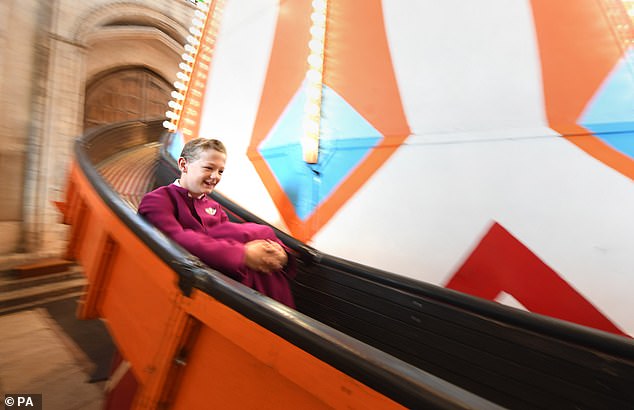 For a mere £2 a ride, visitors were able to inspect the magnificent ceiling at closer quarters before whooshing down

That is why it meddles more and more in party politics. When bishops and clergy are timid about evangelising the nation (and by no means all of them are), they tend to adopt the language of secularism.

Nowhere has this been more evident than over Brexit. The Church shouldn’t express a view on the subject because it is equally possible for a good Christian to be in favour of leaving, or staying in, the EU. It is not a theological question.

Unfortunately, many secular-minded bishops appear to think differently. A few days before the June 2016 referendum, the Archbishop of Canterbury waded in on the side of Remainers.

Justin Welby admitted he didn’t have ‘some divine hotline’, but argued that Brexit would hurt the poorest and should be avoided. But how could he possibly know this would be the likely outcome? After all, some sensible people maintained that, in the long run, Britain would be richer.

And even if the Archbishop were right, might there not be other considerations — freedom from EU diktats, for example — that should be weighed in the minds of thoughtful people, even poor ones?

It was a worldly intervention from the admittedly decent and extremely well-meaning leader of an increasingly secular Church. Coming from our most senior cleric, it was a divisive statement, and I wish he hadn’t made it.

Last month, he agreed to chair a ‘citizen’s forum on Brexit’. It’s true he said it shouldn’t be a ‘Trojan Horse’ to stop Brexit. But since the idea was largely dreamt up by Remainers such as Labour MPs Hilary Benn and Yvette Cooper, one is entitled to be sceptical. 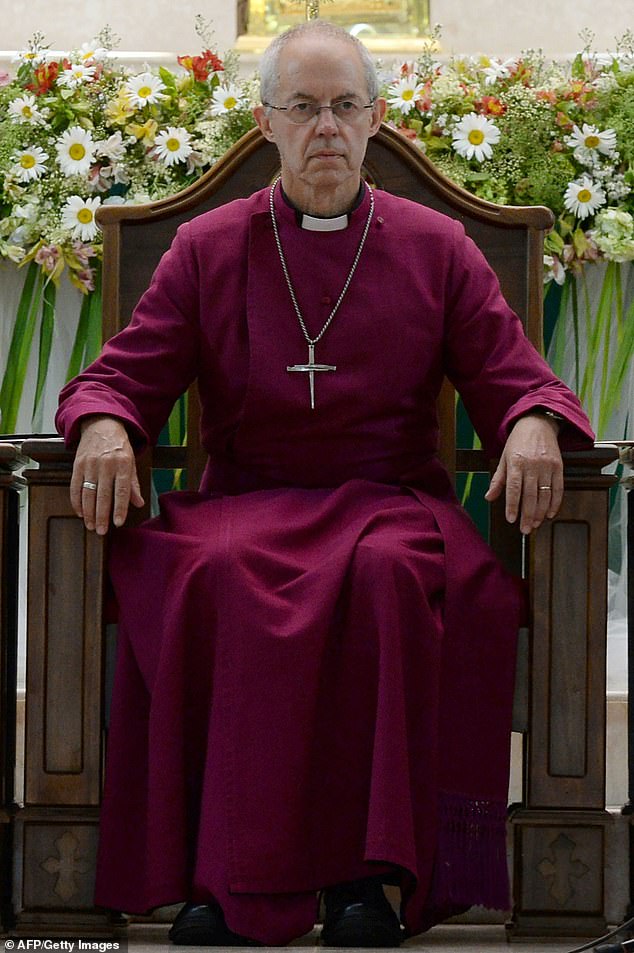 Justin Welby (pictured in Sri Lanka on August 29) admitted he didn’t have ‘some divine hotline’, but argued that Brexit would hurt the poorest and should be avoided

Many prelates have continued to bang the drum for Remain. A few weeks ago, 25 diocesan bishops (nearly two-thirds of the total) published a letter expressing their alarm at the prospect of a No-Deal Brexit. The effect was to make the C of E seem as anti-Brexit as ever.

Rather amusingly, the dwindling group of people who describe themselves as Anglican are seemingly at odds with their leaders. According to one poll, 66 per cent of Anglicans voted Leave, compared with 52 per cent of the general population.

Whether we are discussing models strutting around a cathedral or senior clerics sticking their oar into politics, the point is the same: the Church of England is diminished when it swaps the sacred for the secular.

Does the country care? Probably not a lot. The tragedy is that the Church, which has striven so hard to be ‘relevant’, has ended up being increasingly irrelevant and marginalised.

Once again, I wonder what my father would have said. Doubtless, he would be saddened. But I think he’d hope the Church he served is still capable of rescuing itself.