STEPHEN GLOVER: We need to allow fracking to avoid an energy crisis

Almost everyone I know is against fracking. Not that many of them understand much about it. But this doesn’t prevent them from pursing their lips and shaking their heads while looking solemn and generally disapproving whenever the subject is raised.

What about the United States, I sometimes ask, where fracking on a massive scale has made the country much less reliant on expensive imports of oil and gas? America has vast unpopulated areas, they reply. Britain is a crowded island. They may then add that fracking — which involves extracting gas from underground rocks by injecting high-pressure chemicals — causes earthquakes and ruins the countryside.

It is because of views like these that fracking in the UK has barely got going despite there being enormous reserves of potentially recoverable shale gas, which if extracted would greatly improve our chances of keeping the lights on and the wheels of the economy turning.

Labour is against fracking. As are the Lib Dems. So is the SNP government in Scotland, which has banned all exploration north of the border. Opinion polls suggest a majority of the public is against. And of course every environmentalist you care to mention thinks fracking is the work of the Devil.

Almost everyone I know is against fracking. Not that many of them understand much about it, says Stephen Glover. Pictured: Cuadrilla fracking site in Lancashire

As for the Conservative Government, although supposedly pro-fracking, it proceeds cautiously, and seldom defends the practice. I can’t recall the underwhelming Greg Clark, Business Secretary and the Minister with overall responsibility, ever singing its praises.

The Government’s greatest terror is that the process might cause earthquakes. In 2011, shale gas test-drilling triggered tremors in Lancashire, and fracking was banned for a time.

So it’s no surprise that Mr Clark’s department is apparently ignoring the conclusion of two advisers in the government’s Oil and Gas Authority that the existing low limit on tremors caused by fracking be raised because the risk of harm is ‘vanishingly small’.

All in all, it is hard to find anyone in public life who will speak up for fracking, excepting Natascha Engel, the former Labour MP for North East Derbyshire, who was appointed Commissioner for Shale Gas last autumn by the Government. She recently told the Mail that fracking, if safely and sensibly pursued, could create tens of thousands of jobs, and provide Britain’s energy needs for 50 years.

But hers, so far, is a rare voice in a dispute where the naysayers and doom-mongers make nearly all the running and create most of the noise, confident that they have the unthinking support of millions of people, most of whom — let’s be honest — don’t know much about fracking.

It’s a roaring shame we can’t have a reasoned debate. Consider this: on Tuesday, which was unpleasantly cold, the National Grid could supply enough power only by relying on energy produced by the coal-fired power stations that environmentalists hate (13 per cent of the total) and on imported electricity from France and Holland (five per cent).

Because there was very little wind on Tuesday, less than three per cent of our energy was supplied by off-shore and on-shore turbines. That’s the trouble with wind power. When demand is high, as it is bound to be in cold weather, all the wind turbines in the world won’t help if there isn’t even a gentle breeze.

Isn’t it a bit alarming that in a country of around 65 million people, which is the fifth or sixth biggest economy in the world, the National Grid can only keep the show on the road by cranking up coal power stations and depending on imported electricity?

It wouldn’t take much to go wrong — a ruptured pipeline carrying gas from Norway or Europe, or a tanker carrying the stuff to our shores running aground — for us to discover there isn’t any spare capacity in the system, and for everything to go kaput.

Looking to the future, plenty of people believe the danger of shortages is likely to increase. Britain’s coal-fired power plants will all be shut down by the mid-2020s. Several have already been closed under EU anti-pollution rules.

Meanwhile, the country’s ageing nuclear power stations, which provide 21 per cent of current power supplies, are expected to be de-commissioned by the 2030s. But the replacement programme has been severely dented by the recent decision of two Japanese companies to pull out of building two nuclear power stations with state-of-the-art reactors in Cumbria and on Anglesey. 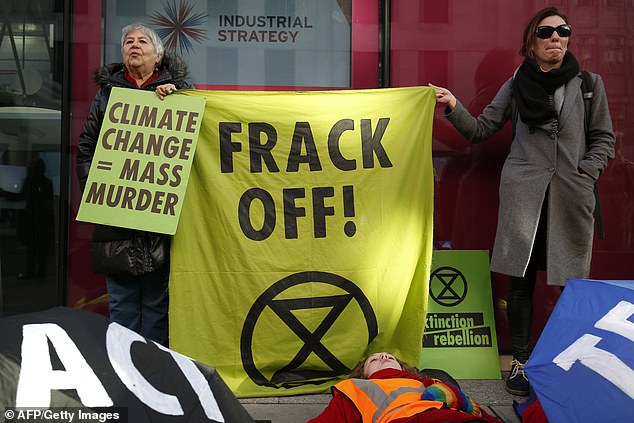 If we still had vast reserves of oil and gas in the North Sea, this weakness and indecision on the part of the authorities might not matter. But we don’t. We have an energy crisis

With the £20 billion Chinese-financed Hinkley Point now the only new nuclear reactor being built, it seems possible, if not probable, that, in 15 years’ time, nuclear power stations will supply a smaller proportion of our energy needs than they do at present.

In short, as coal-fired power stations are certain to be cashiered, and nuclear power seems likely to be curtailed, there is a looming energy gap which new off-shore turbines can’t be guaranteed to fill because the wind does not always blow.

Nor would it be sensible to make up the impending shortfall by importing more gas from Russia. It would be foolhardy to put ourselves at the mercy of a hostile regime. That is the perilous path down which Germany has recklessly gone — 20 per cent of its energy needs are supplied by Moscow — and we would be mad to follow suit.

How easy it is for virtue-signalling or ignorant politicians to condemn fracking without giving any thought to the consequences in ten or 20 years’ time, or indeed for the thousands of new jobs, often in depressed areas of northern England, which it might create.

Which brings me back to the two Oil and Gas Authority experts, Brian Baptie and Ben Edwards, who maintain that the limit on the scale of tremors from fracking could be safely raised without fear of causing dangerous quakes. At present, if the low limit of 0.5 magnitude is breached, fracking has to be stopped.

A company called Caudrilla was repeatedly forced to suspend fracking last year after breaching the 0.5 figure at a site in Lancashire. It wants a higher limit, and says that without one Britain may never have a viable fracking industry.

According to Messrs Baptie and Edwards, in parts of Canada and the U.S. the limit is 4. They say a 1.5 earthquake would be similar to feeling the impact of a melon dropping on the floor. Moreover, there are 50 natural earthquakes of at least 1.5 every year in the UK.

Needless to say, I’m in no position to say what the new limit should be. But it is pretty clear that after the 2011 mishap in Lancashire which I mentioned earlier (when a 2.5 figure was recorded), a cowardly Government set the limit absurdly low.

If we still had vast reserves of oil and gas in the North Sea, this weakness and indecision on the part of the authorities might not matter. But we don’t. We have an energy crisis. And it so happens that we appear to have lots of shale gas.

There’s plenty of evidence that it could be extracted safely while making far less of an environmental impact than wind turbines or electricity pylons, let alone nuclear power stations. A whole new industry could be created if only the Luddites would see sense.

Of course, I realise the Government is understandably preoccupied with Brexit. But can’t it spare a moment’s thought for other important things? We’ll know who to blame if the lights go out.