Letecia Stauch released a lengthy statement to Fox 31 on Tuesday night, detailing the events of January 27 when her stepson was last seen with her, and claiming that the boy was, in fact, in her truck when they returned home that afternoon, contrary to what was purportedly seen in a neighbor’s leaked surveillance video.

Letecia, who is married to Gannon’s father, Albert Stauch, claimed that she last saw her stepson between 3.15pm and 4pm on January 27 as he headed to a friend’s house in Colorado Springs. 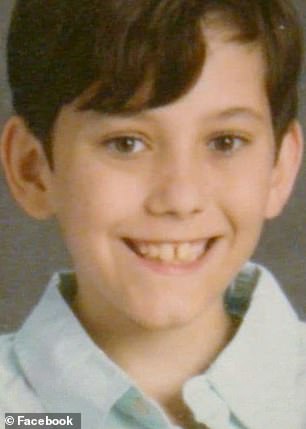 Letecia Stauch (left) has released a statement blaming a mystery ‘friend’ for the January 27 disappearance of her stepson, Gannon Stauch, 11 (right) 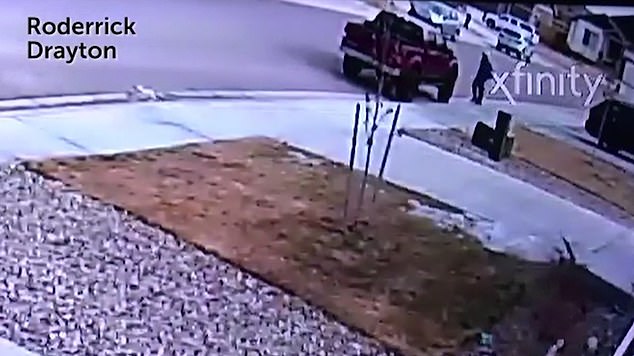 According to a neighbor, Letecia Stauch (pictured) is seen getting into a truck then reversing into the driveway when her stepson, Gannon Stauch, gets into the backseat at 10.13am on January 27 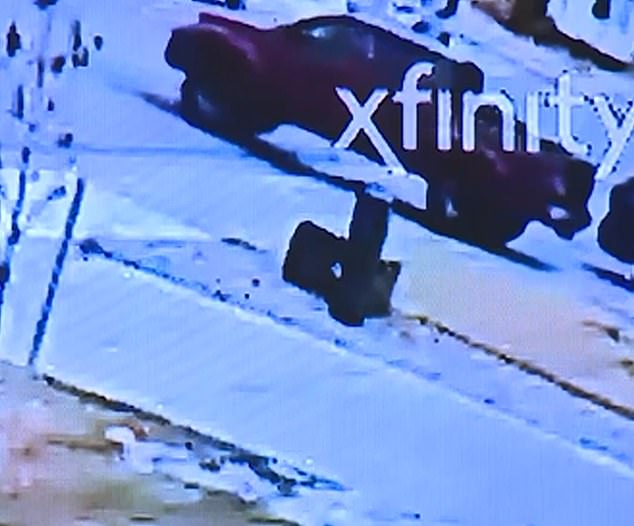 The vehicle return at around 2.19pm and the video shows Letecia get out of the truck, purportedly without Gannon; she claims he was, in fact, in the truck

The stepmother has come under sharp criticism and has been subjected to death threats on social media after surveillance video from the home of her neighbor has emerged, showing her leaving with Gannon in her pickup truck at around 10.13am on January 27, and then returning at around 2.19pm seemingly without the boy.

Roderrick Drayton, the neighbor who’s camera picked up the footage, claimed Gannon’s father broke down in tears after he saw the video.

He said the beginning of the clip shows Letecia backing a pickup truck into the driveway before Gannon leaves the house a short time later to get in the backseat.

Jan. 30: Case is upgraded to a missing and endangered child’s case due to his age, need for medication, winter weather and the length of time he’s been missing

Jan. 31: Letecia Stauch gives interview to KKTV saying deputies had threatened to shoot her and put her 17-year-old daughter in handcuffs

Feb. 4: Neighbor Roderrick Drayton shares surveillance video showing what appears to be Letecia returning home at 2.19pm without Gannon in her pickup truck; claims boy’s father broke down in tears when he saw the video

Feb. 11: Letecia Stauch releases statement to Fox 31 claiming Gannon was in her truck on Jan. 27 and that later left with a ‘friend’

Drayton added that his surveillance camera then showed Letecia returning home around 2.19pm, getting out of the truck and going inside the house, but Gannon is not seen.

Footage from 2.19pm to the time Gannon was reportedly last seen is not available, but the sheriff’s office said earlier officers had no surveillance video showing the boy leaving the property.

Drayton said when he showed the clip to Albert Stauch, he burst into tears and accused his ex-wife of ‘lying’ about Gannon walking to a friend’s house.

The neighbor told ABC News: ‘I caught Gannon [on camera] getting into her vehicle at 10.13 Monday morning.

‘He [Albert Stauch] just broke down crying and said, ”she lied, she lied about the time. He didn’t go to a friend’s house”.’

After news of the video broke, Letecia gave an interview to KKTV, insisting that she played no part in her stepson’s disappearance.

‘I took care of Gannon for the last two years in our home because his mother didn’t want to do it,’ she said.

‘I would never ever, ever hurt this child…these people have these conspiracy theories…I’m like, ‘Why are you saying Gannon is dead?’ He is not dead. We are going to find Gannon.’

She also accused law enforcement officials of drawing guns on her and threatening to shoot her without identifying themselves, and handcuffing her 17-year-old daughter.

In her statement on Tuesday, Stauch insisted that her stepson was, in fact, in her vehicle when they returned home from a shopping trip that afternoon, but he got out from the side of the truck not facing their neighbor’s camera. 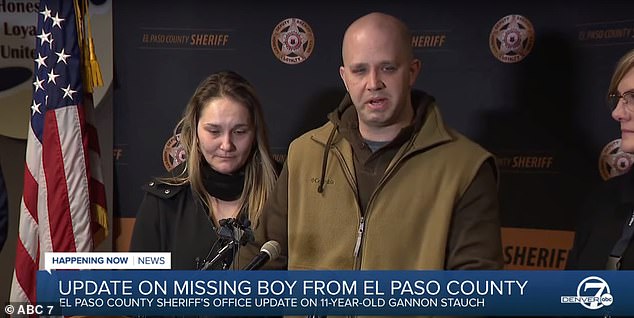 ‘Please don’t think for a second that there isn’t enough of technology to determine shadows and movement around the truck,’ the stepmom wrote. ‘There was also proof from my phone that we had taken a selfie in the truck in our driveway that was time stamped….That can be scanned for actual time verification.’

Stauch claimed that her stepson was the only person who had a key to a gate on the side of the house, and that he left with a mystery ‘person/friend.’

The stepmother argued that investigators have been in possession of this information, including the description of Gannon’s ‘friend,’ from the outset but asked her to keep it out of the media so as not to jeopardize the search for her stepson.

‘I chose to listen, I didn’t leak videos or information. But at this time it’s getting later in the process and we just want Gannon home,’ she stated.

‘I feel the need to fill in some gaps. Now let me stress this, POLICE have known this since the first interview.’

Stauch lamented that she has tormented on social media by conspiracy theorists, and has been confronted by strangers threatening to kill her. 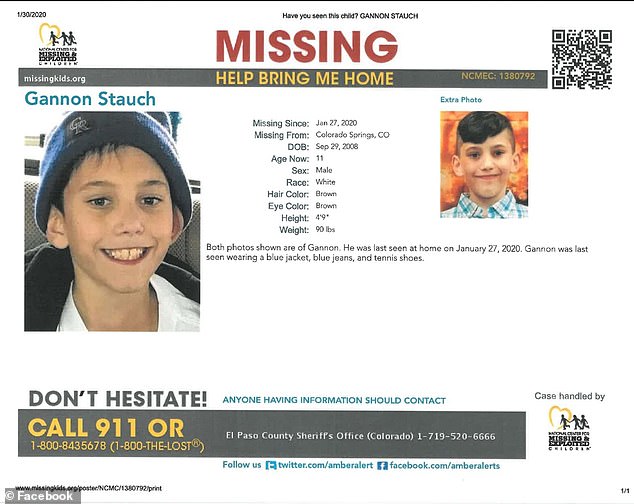 Gannon is classified as missing and endangered child because of his age, the length of his absence and his medical needs

In her statement, the stepmother also addressed Gannon directly urging her to come home ‘because your daddy is waiting to watch the new Sonic movie that comes out this week and the cool shirt I got you to wear to the theatre is in your closet.’

Authorities initially called Gannon a runaway, but the El Paso County Sheriff’s Office later announced that the boy was considered a missing and endangered child because of the time he has been gone, his age and because he needs medication.

As of Monday, 385 tips have been received and more than 2,650 hours of work have been done by the sheriff’s office on this case.